It has been awhile since I climbed the Gavia and wrote my last Homeboy article. It’s kind of funny to think about what has happened since then. That was late May, I was in Italia, now it’s early September and I’m sitting in a cold computer lab at the University of Georgia. Funny what three months can do to one’s geographical whereabouts.

After my glorious adventure in Northern Italy, I headed back to Heidelberg for a short time, and then hopped back on the road and saw a couple stages of the Deutschland Tour – notably the queen stage over the grotesquely ugly Arlberg Pass. I’m sorry, I know that might seem blasphemous, but as far as mountain roads go, the Arlberg road does not receive my signature of approval, nor did the weather that went with it – driving rain, and then the next day when we rode UP it, driving snow. That was a big negative, but hey, I got to see Erik Zabel again. He recognized me, nodded and smiled, that’s big stuff. I think the only person Zabel nods and smiles at on a routine basis is probably his wife, so that just tells you how TIGHT me and Erik Zabel are. Ha.

Back to the Suffering
Unfortunately, I had to return to real life and school after my travels in Italy and Austria. It was back to the traditional schedule of school, training, and racing. My final month of racing in Germany was by far my best. I rode well, found the front of a few races, and even got a few results. I can’t say exactly what changed over the first part of the season, but I have a nagging suspicion that I just got faster, I think it might have been because of my buzzed head. I got bored one evening and decided that the hair had to go, and I did what I had one point swore I would never do: shave my head.

Subsequently, over my last 5-10 races, I just had this feeling, that no one, no matter how fast they rode, how many times they shoved me into the barriers, how hard the wind blew, no matter how steep that climb was that we covered 75 times – I just had this feeling, call it confidence maybe, that no one could drop me. I just knew, that no matter what, I could cling to 23 mm of rubber like no other (I think it was my new aerodynamic coiffeur). Good feelings to have, but not exactly the way to a win…

I had a few other feelings to go along with these good ones though – namely ouch, OWWWW, and holy crap that hurts. I got into a sort of wrecking funk in June – I went through a solid 4 day stretch where I yard saled three times. It was impressively painful, but I think I got it out of my system, or at least I hope so. 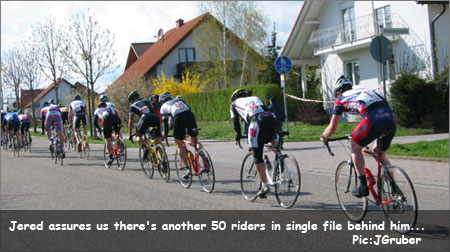 Family Ties
The end of July rolled around, and my money had rolled out of my wallet, my bank account, and anywhere within a 1000 km of me, so it was time to move out of my dorm room and take up cheaper (free) lodging at my team’s clubhouse. The clubhouse was definitely cheap, quiet, and enormous, but I still had to pay for food and living expenses, not good when one has no money. There was a very nice solution though, it is about a 9 hour train ride south of Heidelberg deep in Austria, a little state known as Carinthia (Kaernten) and a small town called Feffernitz – my family. I didn’t go to Austria just because I could eat for free. I went to Austria because I can eat not only for free, but better than a king. Oh, and they’re only the nicest people on the planet, their country is arguably one of the most beautiful on the planet, and um, the weather is rocking. It’s a wonder that I only went to Austria three times over the past year.

I spent two weeks in Austria and turned them into one of the harder two weeks on my bike that I’ve ever done. In 10 days of training, I did over 75,000 feet of climbing. I don’t think I did one interval, or ever once saw my heart rate go over 190, and yet, after two weeks, I was rocked senseless, but oh so happy. I rode all over that southern little section of Austria, as well as into Italy and Slovenia, and once again fell in love with the mountains (for probably the 50th time).

No Place Like Home
Austria was great, but a return to Heidelberg was definitely in order, as I was down to my final week in Europe. No matter what I tell myself, no matter how many times I say I love Austria, Paris, Mallorca, Italy, Slovenia – I know one thing – Heidelberg is home. I guess it WAS home at this point, as I’m now taking up residence once again in America, but that’s not important. Heidelberg was my home – it was where I lived, where I walked, what I woke up to everyday, where my friends were, where everything that I could call familiar was. I didn’t realize that until my final week in Heidelberg. I didn’t realize it until I had to go shopping for the last time, the last time I rode the #2 train, the final good-bye’s to good friends, my final ride through the countryside, that final evening. 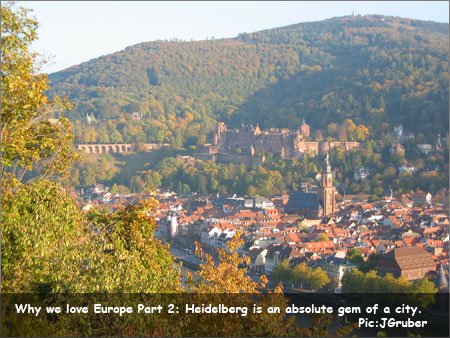 It’s funny to think that, over the past 5 years, I’ve never lived in one place for more than about 8-9 months. I usually spread my time between Colorado and Georgia, but for the first time in a while, I was in one place for almost an entire year. If anywhere could be deemed home, it was in a foreign country.

One Last Painful Fling
My last week in Heidelberg was a grand one, but nothing compared to my final two days. Over the past few months, Rolf had been planning a huge fundraising event for our team. We would begin riding over a 20 km course at 8 in the evening, and then finish the following morning at 8. 12 hours on the road, an entire night. AND THEN! As if 12 hours of riding wasn’t enough, we were to take a short 3 hour nap, get back ON the bike and ride ANOTHER 130 km as part of a huge tour ride that the club puts on, the MLP Tour.

In all, we rode over FOUR HUNDRED kilometers – that’s like 250 miles – over 13 hours of riding time. It was arguably the most insane thing I have ever done on a bike, and it was also probably the most fun I have ever had on my bike. I got a chance to say goodbye the best way possible – on my bike. The way I had spent most of my waking hours over the past year. It was a fitting end, one that I can sit here, type about, and smile like an idiot.

I left Germany, August 16th. Rolf took me to the airport, and saying bye to him was the hardest of all. If you would have told me last year that the best friend I would make in Germany was a 58 year old retired person, I would have done what any normal person would do when they hear something so completely absurd. I don’t care why or how, I just know that I am about as thankful for Rolf as I am for soft bread (and I really really like soft bread).

American Homecoming
I got back to America, had a very happy reunion with Jamila, and then realized that nothing had changed. I had been preparing myself for so long to be ready for that time when I would return and nothing would be the same. Familiar faces would be gone, places would be different, the world would just change. I mean, that’s what things do right?

Except, they don’t really. I came back, and it felt like Germany was just a huge dream, like I had slept a solid 15 hours and I was waking up to a hot summer day. I just sort of stepped into my old shoes again and the only thing that was different was that people intro’d conversations with, “How was Germany?” It is definitely an odd feeling, but that’s the way it goes.

I’m racing again and racing is a bit different, call it a bit more humane. I wouldn’t say that I’m racing well just yet, but if finishing races says anything, out of five races I have finished four, that’s 80%, whereas in Germany, I think I might have just scraped in over 50%, maybe. The racing isn’t easy, but it’s definitely not 130 km of single file madness either.

Lessons Learned
I am having an interesting time changing my outlook in races from: put your head down and suffer for as long as possible and hope for the best, to: look around, think, plot, sing to myself, analyze, wave to Jamila, dream of winning, but basically still doing nothing. I just sort of sit at the back (per the norm) and just expect things to completely blow up at any point, it’s almost like I’m scared to leave my spot at the caboose.

I never thought it would be a problem, but I find myself constantly waiting for someone else to do something – someone else to attack, someone else to bridge that gap, someone else to bring me to the front. I am so used to using other people to survive in races, and here I am now, stronger than I ever could have imagined when I first started riding in 2002, and now it’s MY responsibility to make it happen.

It’s another weird feeling, but I like new and different feelings I guess. I like new situations, I like new problems, maybe it keeps me awake a little longer, it’s at the bare minimum something to talk and whine about. I am enjoying my fresh start in America, but I’m not forgetting about Germany either. I’ll be back. It’s one of those certainties in my life, and I don’t have many. I just know that I’ll be back. 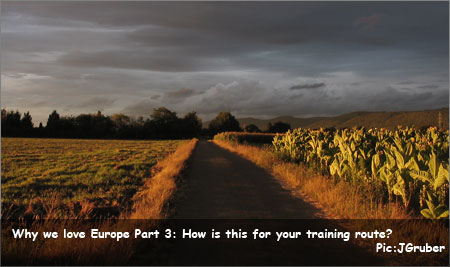 Thanks for reading this year. I have grown up more than these words could ever show, and I am so happy that I was able get the opportunity to live like I did last year. I wouldn’t say that cycling is the most important thing in the world, but I would surely say that cycling provided me with the necessary impetus to get the most out of my time in Germany, and I am happier than anything else to say that I feel I got every bit out of my time in Germany. I have no regrets. That was my original goal – I’ll give that one a big CHECK.

La Vuelta Stg 5: The Beast From The East Roars!