Dirk Finders, our German U23 insider checks in this month from his new Belgian team, some darn chilly races, and a new level of competition where he’s not kicking everyone’s butt… yet.

– By Dirk Finders
In the middle of February I made a team-change. I made my decision to further my education in cycling, and I can get better at my new Team called “NHT Cycling team Tielen”. Our program contains all big races in Belgium, the “Topcompetitie” and some races in France, England and Italy, and the U23 “World Cup” races Liege-Bastogne-Liege, Ronde van Vlaanderen and the Omloop het Volk.

My first two races in Belgium (St. Severin and Brussel-Opwijk) were not a big success. In both races I finished in the bunch. But I was not perfectly prepared for these races because I got my new licence on Saturday morning, just three hours before the race in St. Severin. So it was a little bit irritating and some trouble to get to the start punctually. And as if this were not enough we got a heavy east-wind at 1°Celsius in the Belgian Ardennes and a very hilly parcours with many ups and downs. So I felt not so good and waited too long. In the meantime a big group rode away, so that there was no chance of a good place.

Racing on a Belgian team means getting used to cold – like 1 degree Celsius… can you say ‘shrinkage’?

On the same day I got a telephone call of my new team, that I had to start in the club-race “Brussel-Opwijk” the next day. A race about 150 Km, with 8 cobblestone-sections and 8 cliffy climbs. At the end I sat in the peloton, but our team did a good job. My team-mate Bert Marien got the 3rd place and Cristoph Goddaert got the 12th place. So we were on the 5th place in the team-ranking.

My feelings between the races were not the best because of the cold weather and the hard race the day before.

The next week I did some lesser training-sessions in prep for the club-race “Brussel-Zepperen”. It contains a 4Km cobblestone-section and a hilly parcours. On this day we had some snow and a hard east-wind so that my feet and hands were already frozen before the start.

After a neutralized section of 3 or 4 Km I was the first rider who attacked. But it was not successful, so I had to stay in the bunch until the cobblestones. Two Km before this section I felt good and got in front on the 155riders bunch. A little descent guided us from a big road into a small Belgian way with a 90° corner. I got into the small road in the 5th position. Knowing that there was a group of about 30 men in front I decided to go hard over the cobblestones and got away with a second group of 20 man. So I felt very good and we were nearly at the first group when we got caught by the bunch again.

Dirk riding second wheel – no doubt looking for his next attack.

So my team had to control the bunch because we had 3 riders in the first group now. I felt that it was the right decision and neutralized some attacks. The first group took 2 minutes. Because of the wind the bunch shrank into a 40 man-group and we got nearer to the first group. With 20 Km to go, I saw a chance to get to the second fraction of the first group which already was divided. After a 15 Km solo I catched this group and got 22nd at the end. A good day for the whole team with a 2nd, a 13th and a 22nd place. And we got in the finish with 7 of the 8 riders. So our team left on a good 3rd place in the team-ranking. 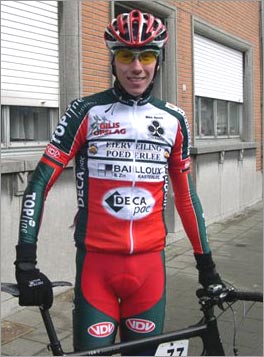 Dirk riding second wheel – no doubt looking for his next attack.

On March 12th I started in a Belgian “Kermesse” over 120 Km. At the beginning I got in front with 2 other riders for 70 Km. As we got caught by the bunch I felt my muscles and was very groggy. But I had to react immediately, because a group of 8 riders got in front. I sat with a second group of 15 riders at 45 seconds behind them. Knowing that we could not catch them until the finish I took some rest in the group, ate and drank. A little more recuperated I attacked with 3 Km to go. Our group fall into two pieces. After a 1.5 Km descent I attacked again and got caught 150 metres before the finish-line. So I got 15th place of 110 participants. Annoying, but a very good training and as you see my 2 hour training before the race, I can be very satisfied with this result.

Now, after 10 races I got 8 times into the price-rankings. And I hope that I can conserve my current form some more weeks. Next week I start in the “Challenge de Hesbaye”. That’s a hard club-race and I hope to get a good place there.