Last week PEZ’s own racing reporter got to race the biggest race of his career at the Belgian opener Kuurne-Brussels-Kuurne. There was cold, there was snow, there came a point where the only thought in my head was “Damn this is hard-core”.

It was a point about 50k into the race when the skies had darkened to visibility of less than 10 meters and I was covered in snow. Thoughts of the epic Giro stage where Andy Hampsten was covered in snow were running thorough my head. I was racing a Belgian Classic in true epic Belgian style. As much as I said racing in the previous sentence I must restate that to “surviving” as that appropriately reflects my position at KBK.

The day started off without the nervousness I experienced last year with my first big Pro race. This year I returned to the same team, living in the same apartment and with the same room mates. So in a way it feels like I didn’t even leave. I did have a bit of apprehension, but it was only a little. 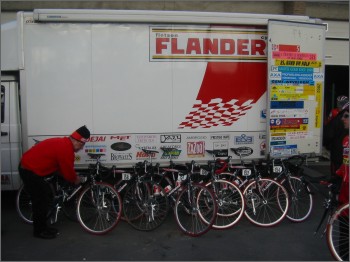 The start of the race.

Arriving at the start the temperatures outside were very cold (30 F), there was quite a bit of wind, but only partially cloudy skies. I was freezing on the start line, my hands were numb even before I started. My 3 months of sun and warmth in South Africa were great for consistent winter training but did little to help me adapt to the harsh biting winds of Belgium. Looking around there were plenty of big names in cycling and some great crowds.

The rolling start was a bit hectic with the accordion effect of the peloton starting even before the starters flag had dropped. I almost hit the pavement before the race began when a rider in front of me locked up the brakes. As we started I went straight to the front and put myself in a nice spot. I followed some small accelerations and even decided to put in my own little attack at the very beginning. It wasn’t anything spectacular or full-on, just a stupid little move of some unknown rider on some unknown team, but just the kind of stupid move that the peloton will sometimes let go. In the back of my mind I thought “I could be that stupid rider” but alas the peloton would have none. Thus ended my 15 seconds leading Kuurne-Brussels-Kuurne. I never saw the front of the race again.

So I put myself into the belly of the peloton and tried to keep my position towards to the front. I will say this part of my plan didn’t happen nearly as well as I would have liked. I just wasn’t able to follow the ebb and flow of the sporadic nature inherent to bike racing and kept losing my position. The stiff and strong north wind was causing havoc to the mostly west then east direction race and the gutters split the peloton a lot of times. 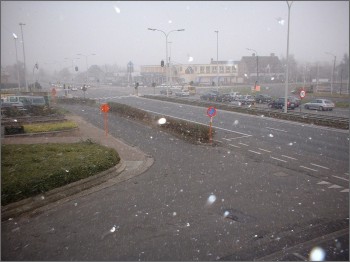 Oh what a nice March day in Belgium.

My race ended pretty much outside Oudenaarde, only 50k into the race, when the peloton split. I was at the front end of a large second peloton when the group shifted quickly to the right and an RAGT rider decided it would be a nice thing to quickly move his rear wheel across my front wheel. I went down, but was up quickly and on the bike just as the Flanders team car arrived. Luckily Flanders had drawn position 1 in the caravan and I was able to make it back to the 2nd peloton without much problem. The group I was in chased hard and came very close to catching the lead peloton when we entered a nasty snow storm, but after the skies cleared it was all over and the gap increased. I rode in tempo with the group to the feed zone. I didn’t feel so bad when I saw some riders like Roger Hammond, Ekimov and Ludo Diercxsens stopping alongside me. It eased the internal torment of having to stop a little more. Another snow storm starting helped convince me stopping was not a bad idea. 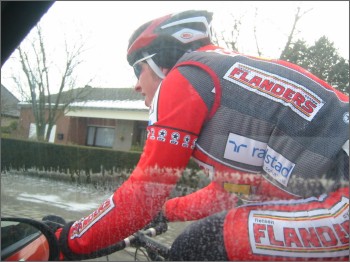 Making it back to the second peloton.

So thus ended my venture in KBK, 50k’s of riding. It was an experience and another race to chalk up the experience points to help me move myself along in the hierarchy of the professional peloton. Till next time keep the rubber side down.