If stage racing was to have a theme song I would choose Pink Floyd’s – Comfortably Numb because it’s the only way to really describe the consciousness of legs that feel perpetual discomfort lingering in their fibers. After the first couple of days the sensations succumb your whole body and it’s an entirely encompassing numbness. These revelations came after many revolutions of a 9-day torture test known as the Olympia’s Tour.

Ranked as UCI 2.5 under-27 stage race it is only behind the Tour de L’Avenir and the Baby Giro in prestige and toughness. I wasn’t originally scheduled for the race, but after another teammate came down with a cold, my weekend plans of two local kermesses and some long training days was thrown right out the door. I ventured to Holland blind to the reality of what really entailed such a long and sustained assault on the body.

The last two years in Europe saw my race schedule include many one-day races and the occasional two-day stage race, but never 9 days and 1,400 kilometers (868 miles) of racing. So here is the break-down of the race, but to spice it up a little, I will be writing the race report in CB talk inspired by the viewing of Smokey and the Bandit on the first night of racing. 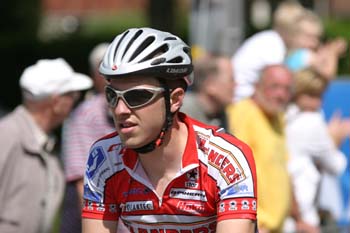 I am beginning to become “Comfortably Numb” about this stage of the race – Photo Credit: wielerfoto.nl

Stage 1, 141.8km:
“Charmon let out a paltry ‘Yea haw’ at the start but Homeboy here had to show him how it was done! Nothin’ like the look of dumbfounded Dutch boys to get a laugh. … Racin’ started off like a fox was thrown in the hen house. The wind was blowin’ more than Larry on a Burrito binge and the group was shred like cheddar. It all came back but the finish was fulla riders crashin’ faster Buford T. Justice chasin’ the Bandit. Two-teammates were down for the count …

Stage 2, 159km:
“Fast and furious from the start. Stupidity was abundant and transformed itself into senseless crashin’. I hit the deck but had two riders under me to cushion the blow and only a small scratch. Nothin’ bad and I got myself some 5 seconds of glory on TV cause I went down with three Rabobank riders. G’Money came in fourth in the stage after holdin’ off a peloton in hot pursuit.”

Stage 3, 190km:
“Nothin’ but lot’s of attacks and miles of playing human pinball with random Dutch road obstructions. Charmon tried to Evil Kenevil it over a fallin’ Dutchie … he didn’t make it. Survival of another day for myself.”

Stage 4, 93km:
“Time for a math lessin’. (60 miles / 30mph) = (2 hours of race time + all crosswind) = PAIN … Me and my good drinkin’ buddy Gutter got to see a lot of each other. Problem is his other buddy Pain always shows up and makes trouble. Still Homeboy was able to survive and come in only just behind the front group. 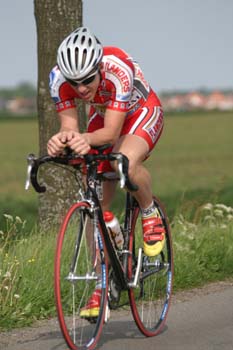 Doing a bit of suffering during the time trial – Photo Credit: wielerfoto.nl

Stage 5, 27.5km TT:
“Sadistic race organizers … another race … wait you mean a time trial … on the double day! Arrrrh … Pushed it just under threshold for a decent little effort, but only used aerobars and a regular bike. The Dutch cyborg of Thomas Dekker put 7 mins on me and 1 minute 15 on the second place rider. I’m ready to call them X-files people in cause the fact the teams name is “Rabo”bank doesn’t seem to be a coincidence.”

Stage 6, 230km:
“It’s all a blur … I look down to see 70km then all of a sudden 180km … where the hell did that time go, I want it back! In the blackhole of time The Italian Diesel broke off the front. He spent 170km in the breakaway with two other riders in almost all head-wind. We caught them just before the start of the local laps where a crash took out G’Money (he came out ok) and nearly myself and Scotty. Whew! That woulda been bad!”

Stage 7, 160km:
“Ummm … Legs, do you copy? Legs, do you copy? … Where the hell did my legs go? So my legs went on strike and me and the Gutter got up close and personal in another windy day. In fact we got down right cozy when I got bumped into the ditch and spent the whole day chasin’ with a back group. Don’t know about ya but slave labor is looking sorta like a nice vacation to me.”

Stage 9, 200km:
“The final day I showed up to the gun-fight with a single six shooter and everyone else had machine guns. Put on my game face, ran head on at them and let out all six shoots in a last desperate attempt. Homeboy was down for the count fast. Scotty was in hot pursuit of the lead group and caught them. Then he got clipped from behind and it was a mechanical disaster.”

My little mini-grand tour made me appreciate even more exactly what it takes to do a real grand tour. I would have loved to have finished it, but making it to the final day was a huge step up from last year for me and was a proof of my ability to suffer long and hard. After those races the local 80 mile Kermesse doesn’t look so hard.

For me there’s lots of racing coming up and many hard Pro Kermesse races leading up to the Belgian National Championships. Till next month … keep the rubber side down.
Tot Ziens,

About Gregg:
Gregg Germer is now in his third year in Belgium and is racing professionally with the Flanders-Afincom cycling team out of Oudenaarde, Belgium. Between races and training he likes to spend his time consuming mass quantities of coffee, watching movies, reading and doing website design in addition to his writing articles.