The days leading up to the weekend of the E3 and Brabanste Pijl were filled with the normal speculation as to which races you were going to be doing. I personally was hoping to be doing Saturdays E3 Prijs put in a good ride then recover for the 3 Days of De Panne that started on Tuesday. When the selection came I was doing both Saturday and Sunday. I had bit of a frown at the pain I knew I was in for but happy to be in the selection for two big races.

Saturday’s E3 Prijs has to be one of the hardest one-day in Belgium. The race goes over 12 climbs in the famed “Vlaamse Ardennen” with most notable the Oude-Kwarmount, Patersburg, and Kwarmount. Everyone from the apartment went to pre-ride the climbs on Thursday with our team mate from last year, Jurgen Landrie. The recon ride was great to learn the intricacies of the course (a main key in making yourself in the right place at the right time) but it did little for confidence as the ride showed us how hard it would be once we hit the climbs. 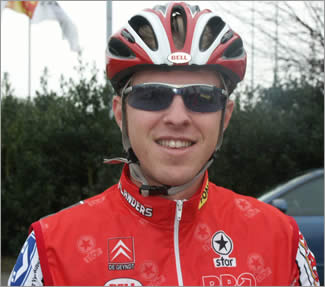 So race day came and there was a slight chill in the air with some light breeze, but all in all it was a nice day. Straight from the gun the race was off on a blazing pace. Luckily for me the races starting kilometers before the climbs were all around the area I live and in fact the race passed right in front of our apartment at kilometer 45!. I used a bit of the local knowledge to move myself up in places I knew I would be safe to pass and the areas where the group would line itself out.

Just after we passed the apartment I was in the top 20 and staying outta trouble. As we approached the outskirts of Oudenarrde and the first climb (yet not classified) I felt decent enough to actually pass the three T-moblie riders on the front and lead the group through some of the narrow and winding streets of Ename that I knew well. It kept me out of trouble as there was a bad crash there.

Shortly after the climb there was another hard cobblestone section of about 3k where I kept myself out of trouble. I was feeling good, but the pace was staying quite high. In fact as we sped through the roads of Flanders I was amazed at how fast we stayed. It is hard to express in words the unrelenting pace a professional peloton can ride at, but even after doing many big pro races it still impresses me.

The whole time I kept to the front and held my place. There were a couple of crashes before we hit the climbs but I didn’t know about them. Unfortunately one of those crashes took out my teammate Bart with a concussion and a fractured collarbone.

So we went up the first climb in La Houppe where I watched Erik Dekker just fly off the front of the group as I just kept my place in the peloton. Over the next 2 climbs I was doing ok but still farther back than I wanted to be and just before the Eikenburg the peloton split and I was in the second group. The second group pulled the gap back at the bottom of the climb and I launched myself ahead to maintain contact but the ‘yo-yo’ effect in speeds meant the front group was going to fast for me to accelerate and stay so I faded off the back of the group.

I spent the next 10k chasing hard with a group of riders till Taaienberg. It was there my shifting went all array and I couldn’t get back into my big ring. I chased hard, but it was no use without my big ring. So I decided to call it a day and refocus my energy to the next day’s race. The group I was with eventually made it to the finish, but it wasn’t classified. 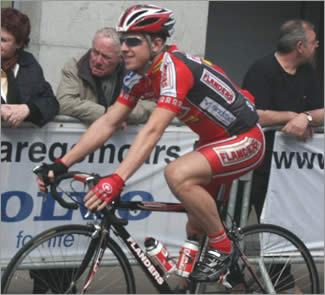 Not at the races that weekend, but a recent photo from a local kermesse race I was doing. – Photo Credit: Romina

On Sunday I woke up tired. The 150k from the previous day left me tired as I gave everything on the Eikenburg and just after to stay on with the main peloton. So I came up with two goals: First, ride as far to the front of the race at the start and keep out of trouble for as long as possible. Second, avoid causing a crash of “The Boss” one Mr. Armstrong. The second one was just to ensure I didn’t become famous for all the wrong reasons. Even during the race you could see a bit more space given to Lance as everyone seemed to have the same idea as me.

The race started off this time under terribly rainy and wet conditions that Belgium is renowned for. The pace again was seriously fast at the start and was full throttle till about 60k into the race. I think we must have been doing somewhere around 55kph for the first hour through wet roads and city lanes but then it all comes to an abrupt stop. And so begins an unwritten, unspoken and generally accepted neutral zone of 25kph speeds.

Funny thing is no one comes over a loud speaker with an announcement or does anything to state its start. The peloton is just beating it at 55kph and then a couple of guys just stop and pull to the side to take a piss or go back and drop off clothing and everyone else follows suit. I still have yet to fully understand it’s workings but I can say that my bladder is happy and I am glad not to have to carry my extra clothing all the way to the finish or easily get a second bottle from the car.

So soon after the “great lull” we started to hit the hills and I decided my day was over as my legs were done. In all it was a accomplishment of small personal goals and not much else of significance. I was just glad to ride well at the front and chalk up some more experience in following the ebb and flow of the peloton.

So once again the results weren’t there, but that isn’t a worry for me as Saturdays race showed me I have the skills to stay with the front of the peloton and my fitness is on the right track. Just another step on my path of being a pro … only couple thousand more to go if all goes right.

Take care and keep the rubber side down.