Our resident Homeboy in Belgium Gregg Germer is back with an update of the past couple of weeks. Gregg has been going well in a couple of Pro Kermesse races, rode himself dizzy in Germany and is starting to question the art sense of today’s Belgians.

Pro Kermesses
As of late the staple to my racing diet has been a variety of Pro Kermesse races. These are almost always in the 150-180 kilometer range and can have everything from a few pros and a lot of amateurs to almost no amateurs and several Pro Tour teams at the race. Recently I’ve had two quality rides in these races. The first being in Lede.

I had done this kermesse the year before and I knew the course, typically small Belgian roads with some very rough open concrete roads. There was a good group of very strong riders and it was sure to be a hard race. So straight form the start I made my way to the front and put myself into attacking position. For the first lap I was up at the front and putting in some good attacks here and there. After the first lap the gauntlet went down and I was doing everything I could to go with the moves … and well I did. I made it into the second small group off the front and then proceeded to completely get dropped from that group. Not only did I get dropped from that group, I wasn’t even able to hold onto the group behind that. So by the time I made it to the peloton there were around 20+ guys up the road and I wasn’t there!

Back in the group I was quite discouraged and wasn’t too happy, but I stayed in and waited to see if something would develop and maybe go with it. But alas nothing would ever make it to that front group. I did however make it off the front with one lap to go (well the last lap for us but only half of the race done) and from this group of five I was able to easily take the sprint. Where did first from the back group place me in the end, 26th place. One out of the money! Damn. 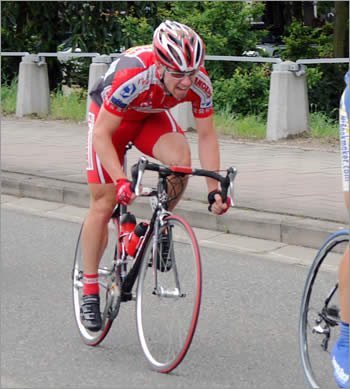 So the next race that went well for me was in Melle, near Gent. The race was starting under some quite dark skies and cool temperatures. The race was for the most part together for the first third of the race but then the split in the peloton came and I wasn’t in it. I was left back in the peloton and not to happy with my position. So about half way through the race a nice round of attacks came out of the peloton and I found myself in a small group of 9 guys along with my teammate David chasing the front group. We all worked together well and within 30k of the finish we had caught the front group.

I was by this point hurting a bit as I used up some decent energy in helping the break catch the front group, but I was still fresh enough to be ready for any hard attacks. At this point my team mates Bart De Spiegelaere and Bert Scheirlinckx started to do counter-attacks off of eachother and were really putting the pressure on the field. Eventually with two laps to go Bert was able to go off the front with another rider and I moved to the front to cover attacks and for the next lap stuck to almost everything that tried to go off the front. The only person to escape was Hamish Haynes from England who eventually went on to win the race. When Hamish attacked the field thought about going with him but for some reason decided not to. It’s a move I ended up regretting. Just before the last lap I ended up cramping really bad and was stopped by the officials as I crossed the line. 36th place, but I helped a team mate make it off the front for 3rd place.

German Crits
This year I was able to do the Glesen-Net Tour again in Germany. This is a three-day race of 100 lap crits. Each crit is about 550 to 700 meters long and if there is a slick, cobbled, rough or bad road in the vicinity of a downtown area where we will be racing it’s sure to be included.

This year we started off the race in Kirchelen. The course featured 600 meters, a downhill, one 140 degree corner and slick brickwork pedestrian zone. Before the race my team mate Bjorn explained how it worked. The races were real and the prize money was real, but the race was half-fixed as the many six-day track riders and fast German riders pooled together to make a little mafia group. Our job was to ride hard enough to make them take us into their group and then we wouldn’t have to worry about racing hard all the time on the dangerous courses and let the local guys get their glory while we get in on some cash.

The race started off fast and only three laps into it my team mate Bjorn fell in the 140 degree corner after a rider in front of him went down. I made my way to the front and started to attack and go for primes. Just 30 laps into the race Alex Kareev from the amateur team of Flanders, ASFRA. who was racing with us, was off the front with two guys and I went to the head of the little mafia and ask “Are we in?” making a hand motion and motioning that if I didn’t get an answer I was going to keep attacking. He nodded and agreed and I left the rest of the race’s glory to those local guys and kept to the front.

The second race I stayed to the front, rode strong, but mainly helped keep the race controlled and let the race go mostly as planned. I ended up flatting half way into it and then regretted not bringing spare wheels. The third day I just hung at the back of the race and listened to my team mate David and Com-net rider Corey Sweet call out code all race as to where the hot girls were on the race course. All I heard was “Corner three, left, blue top” then “Corner one, right, white top, blonde” all race.

So after many times going in circles over all those races we got our cut of the prize and then went home happy. On a side note we went back to Germany but without anyone who was able to speak German and get us ‘in’ so we fought it out like a real race. It was carnage, we attacked left and right and took several priemes, two of which were 100 and 250 euros each, and placed myself in the top 15 and my team mate Stephen top 8. So what did we get out of this hard race? 15 euros. Yup, we got flicked, tried to argue our way but it was pointless, we weren’t ‘in’.

What is this?
So recently I was riding down the road I live on, the N60, towards Oudenaarde and I came across this: 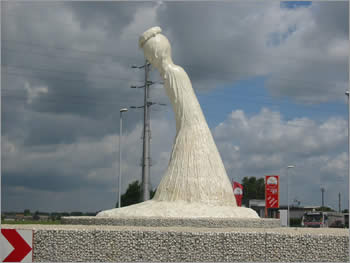 Now, I am not sure what it is? But I do know it is something that someone was definitely paid to do and, well it is complete bollocks. I am told it is supposed to represent a woman coming out of the Schelde (the local canal), but personally I think it looks like a giant dork or something the artist copied from his kids last ice cream eating episode. At least I know I can have a career as an artist in Belgium if my cycling doesn’t take off.

So there are the major events of the past months, not too much exciting stuff, but some good times. The big races pick up now as the Tour ends and the important UCI races start to come one right after another for the fall season. It’s full on racing from now till the end of October.

Take care and keep the rubber side down.