The long days of miles are just about over. Well, not over, just the monotonous days of 5 hour rides. There will be plenty of 200k plus racing days in the saddle to come. This winter I put in just the right amount of miles while increasing the intensity that extra notch to help raise the pain threshold to where it needs to be.

So after all those miles it was on to my favorite part of the year, racing. This year I want to hit a nice peak early in the year so I started bringing my racing in a bit earlier than normal. This year I started off with the Pick’n’Pay Hyper to Hyper in South Africa, also known as “The Fast One” because of the negative drop in the point to point race course.

I did the race three years ago when I came to South Africa, but the last time I did the race it was certainly a lot easier. This year I was dropped off from the pace twice during the race only to claw my way back into the peloton. I think it was a combination of the speed, the hours of training in my legs going into the race (22 hours), and my lack of any intensity training. Still I suffered my way through the race and placed 9th in the end. A decent result. 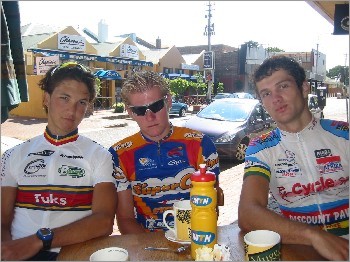 The next weekend was a smaller local race in Veerinigen. These smaller local race are great ways to get in a nice race under 100k and still be able to train hard throughout the week. So the perfect early season warm-up. I felt particularly good at the start of the race and ended up making a solid breakaway after just 10k of the race. The breakaway was working well together and we had a nice gap until 2k before the only hotspot sprint. It was then all cohesion went out the door and the attacks came. I followed the moves, set myself into third behind the two teammates infront of me, attacked to the left in a gap that no one thought I could have squeezed through and used the surprise to set up a nice gap that I kept all the way to the line. I got the hot spot!

I went back to the field after that, my legs were really hurting and I didn’t want to drive the break all day. So even with this “I don’t want to be in a breakaway mentality till way later” I found myself following some small attacks and wheels that formed a small four-person group, damn it. I stayed with them for 5 minutes and then said adieu. I was waiting for a break that had a chance. The chance came.

I wanted to get into a break at about 15k to go and I did with a nice group of 9 riders. The only problem was that one rider decided to attack just as I latched on and had a gap, so I went straight to the front to chase. I finished my pull, no one wanted to chase hard, so I took another hard pull, still no one wanted to chase even after I pulled the gap to within 10 meters. Oh but one guy did want to go, the riders team mate, who bridged up to him. So now we got two guys, both from the same team, and a bunch of guys all look at each other to do the work. I was to drained to respond immediately so I had to bide my time. I helped to pull and waited. With 2.5k to go I launched a full balls-to-the-wall attack as hard as I could to try and catch the leaders, or at the least secure third place. I was caught with 500m by the breakaway/peloton as they merged in the last kilometer. Damn it, outta the results, but I still got a prize.

The next week was a not so good ride at a hilly race, Berg n’ Dale, near where I live in Roodepoort. I was still recovering from a cold and wasn’t able to breath properly and was dropped half way, still it wasn’t bad cause it was during my 5 days of recovery and rest between base and power training.

The next weekend was another small local race, Rooivaal, in Pretoria area. This race went really well for me as I was able to push it very hard when I wanted to and was the first race I had actually shown up to without tender legs from long base miles. I made the first break or the race, a 14 rider strong group, with every team represented. This should have been the ‘move’ but a misdirection by a marshal and the breakaways backtracking eliminated any lead we had. So the race went into a long and slow methodical European style race of attrition. The peloton was reduced in each gutter the race was put into and by the final 10k there were only 9 of us left. In the end I was 5th. I screwed up the sprint for 3rd by stopping to early. First and second were taken by the Super C Cycling team which I was working with as their team has been kind enough to help take me to all the races. So I was happy to ride well. 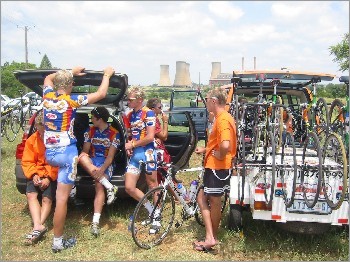 This past weekend was another big classic, the Super Cycling Challenge. This race was another good one for me, but has a slightly less exciting result as I flatted with just 15k to go in the race. I was sitting at the front of the second group going up the last climb almost at the top when I flatted. I was feeling good and knew there was a good chance for me to pull off a nice result, but that is the way it goes.

Still, it’s a nice sign of good times to come. I have never felt this strong and powerful this early in the season, ever! Nor have I ever put in such a solid winter. This year I have had only one day where I didn’t ride when I was planned to in 16 weeks of training. I have followed a nice steady progression and each week the form is slowly coming on. I can’t wait for Europe and the big races. I will be arriving on the 22nd in Belgium and hopefully be racing Kurrne-Brussels-Kurrne o the 27th. Still if I don’t do that race there is still the Driedaagse van West-Vlaanderen, Prix de Lillers, Omloop van het Waasland-Kemzeke, Nokere-Koerse, GP Rudy Dhaenens, Dwars door Vlaanderen – Waregem, E3 Prijs Vlaanderen, and Driedaagse van De Panne – Koksijde scheduled for the Flanders team in March. I think there will be a lot of racing to be done this year.

So till next time, keep the rubber side down.

About Gregg:
Gregg Germer is now in his fourth year in Belgium and is racing professionally with the Flanders Pro Cycling Team out of Oudenaarde, Belgium. Between races and training he likes to spend his time consuming mass quantities of coffee, watching movies, reading and doing website design in addition to his writing articles.