I took a break from my usual race routine to do a special event called the “Infierno del Sur”, (the “Hell of the South”), held not far from my home in Sevilla Spain. The Infierno is actually a “cicloturista” (like the “grand fondo” rides in Italy), but I think the best way to describe it is a tough century ride on steroids – it couldn’t be better named… 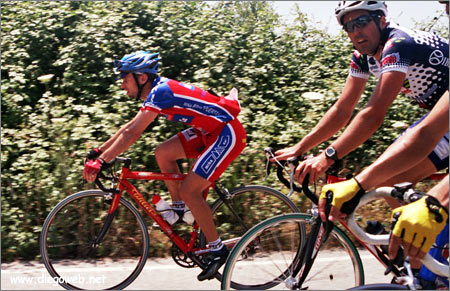 It’s 240km with a total of 3000m accumulated altitude change and the temps are usually in the upper 90’s. So needless to say the profile looks like a saw blade. This is a cool event – even for elite level races, as you get special bragging rights here in Sevilla to do it, and finish well, even though the organizers will tell you, “this is NOT a race”.

The ride was on a Saturday and my team had a race on Sunday, so I made up an excuse as to why I wouldn’t be able to race and called our DS. I had a feeling he wouldn’t like the fact that I was going to skip a race to do this ride, so I told him something else. However, for me the ride was going to be a race. I really wanted to be the first one home. 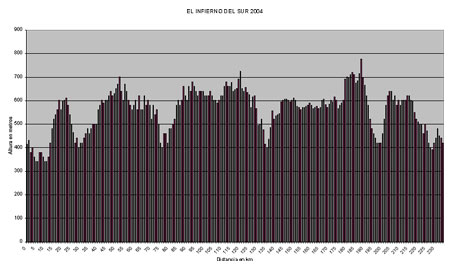 There were about 300 or so people of all types, including two of my teammates that rolled out at the start. Apparently they didn’t feel like driving to the race the next day so they opted to do the Infierno. I started somewhere in the middle of the pack, and worked my way up to the front as we left town. When I got to the front, my teammate Lucas, told me that some guy took advantage of the rolling down hill and opened up a gap. I decided to go up the road after him and figured a group would come with me. Well, I caught the guy, nobody came with me, and on the first climb, riding at my pace, seated and not forcing it I dropped the guy. So, I still figured that very soon a group would come up to me, especially with Lucas and Dani back there, and that would be that.

I carried on at my rhythm and nobody came up, so I kept going. A little while later, a police moto came up to me and I asked about how far back the group was, expecting them to be close. He told me that they were about 3 to 4 km back. Wow, I thought that’s a ways back. I made it to the first water/food stop on my own. I refilled my bottles and kept going. 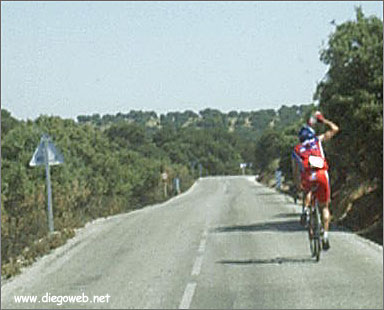 That’s a long hot road by yourself…

When I reached the second stop, I passed it and kept going. There was a little confusion in that town, as they weren’t expecting riders as early as I had arrived. This is where I messed up a little. I should have taken fluids there. Later, I would end up having to ration my fluids trying to get to the next stop. The day before, I had tried to set reminders in my HR monitor to drink every 15min and for whatever reason it didn’t work. Actually the whole thing decided not to work as it (HR monitor/cyclocomputer combo) kept turning itself on and off and so it didn’t record all of the data. This was not good; as I had no idea how fast I was going and had trouble pacing myself.

Afterward it was obvious I had gone too hard and combined with letting myself temporarily run out of fluids would be the end of my Giro style solo break. The last time a moto gave me a time check, he said I had a 12min gap over the next group behind me. WHAT?? So at this point, I had to keep going. As I got to the 130km or so, the gap had been reduced to 5min and as I approached the water stop, completely dry, at 160km the gap had come down to 2min30sec. 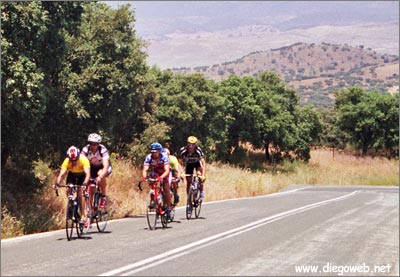 At this point I decided it was better to slow up and wait for the group because it was obvious that sooner or later they were going to catch me. As I was stopped to refill my water bottles they caught me. It was a group of 5. In reality, it was a pro rider from the Div II Spanish squad, Cafe Baque, with 4 guys glued to his rear wheel. I have a feeling that if it weren’t for that dude, I probably would have ridden 240km solo. We started up and started riding a pace line, but I could tell now that I was hurting. We had also come out of the mountains into a very flat/rolling baking in the sun with decent cross/head winds. I had to give it everything to stay on the wheel of the last guy. I thought for sure I was going to completely blow up. 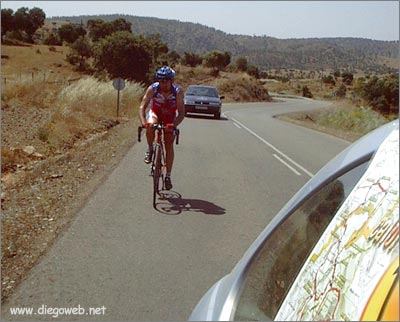 Dude – where is everyone…?

At this point we had the lead car in front of us and an ambulance behind us. I thought to myself, the group pulls away from me, I’m stopping and getting in the ambulance. Luckily I didn’t have to. When we hit the next climb, the Cafe Baque dude attacked and nobody went with him. I started to recover as the pace came down a little. Slowly I recuperated my energy and started pulling the group (me and 4 others) along.

On the last big climb I attacked the group and only one guy was able to follow me. He kept telling me to take it easy, and I kept asking him “why?” I think that pissed him off a little. As we reached the top though another had come up. We decided to stop quickly for a Coke at the last water stop and when we did the other two guys came up and went by. We got back on the road immediately and I pulled our trio across the gap to the other two. When we regrouped, we basically made a deal to not attack each other anymore as there were maybe 30km left. We rode in as a group at a good pace and they all decided to let me enter first in our group because I had been out on my own for so long and I had done a lot of work to pull them along after I recovered.

However, when we got to the finish we decided to sprint anyway and I took out the group sprint. So, I pulled off a 160km solo effort and ended up getting beat by a pro. Not too bad. It took us about 7 hrs to complete the ride, which is about a 34km/hr avg. over 240km. Looking back on this experience, I’m glad I did it, but I don’t think I’d ever do it again. I was completely beat afterward and it seriously took me a week and a half to feel fully recovered. I would definitely recommend this event though to anyone wanted to take a vacation to southern Spain with his or her bike. They also offer what’s called the “Infiernillo” which means “Little Hell” which is only 170km long. Well, I’ll have to get back to racing soon. Hasta la prуxima.

Nathan Deibert is a 27 year old, young American living in Sevilla, Spain, riding for the Campos Lorca Elite-Sub23 cycling team, and living a dream every day. Drop him an email at [email protected]