Homeboy Espaсa: In The Money!

While a lot of us are still blowin’ snow drifts, Nathan Deibert is in Spain – lining up for a 170 km race, convincing local authorities that he does have a “zee papers” to race, learning that in Spanish racing rules can change with the breeze, and finishing in the money…

Our story begins…
On Friday I got all my stuff together, packed the car, and headed to Lebrija where Irene, my girlfriend, has her apartment. I wanted to stay there Friday night because Lebrija is only about 30km from Sanlucar de Barrameda where the race would start, and that meant less hassle on Saturday morning. 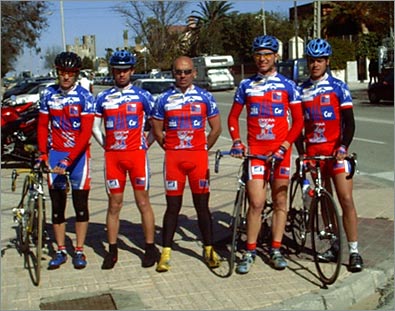 Zee Papers
Right after I got there, the 2nd director of the team calls, all worked up, saying it’s possible I won’t be able to race because my license and permissions haven’t been approved by the R.F.E.C., and that I shouldn’t be with my girlfriend the night before a race. No worries on the girlfriend part because Irene was in Sevilla with her parents, and lucky for me, the cycling Fed office for Sevilla (where I live) is open Friday night from 8:30 to 10pm. I called and they were able to fax copies of all the papers they have regarding my permission to race in Spain to the director. Antonio (2nd director) brought the papers Saturday morning and I was able to enter the race without a hitch. However, I spent a few hours on Friday evening in a panic and that’s not really how you want to feel the night before a race.

Not 22 Teams, But 22 Riders
Saturday morning was cool and sunny, but windy. That worried me a bit because I knew it would be windier at the start because Sanlucar is on the coast, and honestly I’m not really built for fighting wind. I’m only 1.71m (5’7″) tall and weight 62kg (136lbs), not really the build of someone who drives the group into the wind. I was surprised at how few riders showed up even though I didn’t expect a huge turnout. There were only 22 of us on the start line, but there were two good reasons for this. One was that on Sunday there was a race of greater importance (Copa Espaсa) in another part of Spain and the other was the 170km we were about to tackle. 170km race in February, that’s crazy! 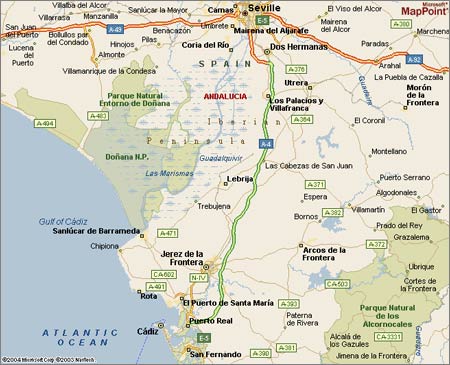 The race started in Sanlucar de Barrameda and headed northeast to Trebujena, then Lebrija, then Las Cabezas de San Juan. From there we turned southeast toward Villamartin. Then Southwest to Bornos, Arcos de la Frontera and Jerez de la Fontera. After Jerez we turned northwest back to Sanlucar.

Here in Spain, a small field usually means a hard race, and that’s exactly what happened. People started attacking into the wind in the first 10km trying to make a split in the very small field. We did get one guy (Leo) away in one of the breaks, but we knew it wasn’t going to be our day when about 20km down the road my group passed our team car and Leo standing along side of the road. Apparently Leo was riding a new bike and all of a sudden the seat binder loosened up and the seat dropped the whole way down. Not something that is supposed to happen in races.

New Rules On the Fly
I was in the 3rd group, chasing the entire time, until we reached the town of Villamartнn. At this point, the race was to turn left and do a loop in the town and come right back out. My group got there as the leaders were coming out of town. The chief official decided to stop our group from going into town and said that once everyone else passed he would hold us 3 min and then we would go on with the race, a sort of “free lap” in a road race.

Well, we started off then and caught the next group before the next town. At around the 100km or so my group was just kind of moving along with no real effort to catch the front group. On a flat section, I went to the front to try and increase the speed of the group. After a little bit I looked over my shoulder to see what was going on in the group and somehow I had opened about a 500m gap. I decided I might as well go for it, I’m sure when they realize I’m moving further away they’ll come after me.

Traffic Circles & Traffic Control?
Well, that moved turned into a +/- 30km solo break. If it hadn’t been for all the traffic circles in the last town before the finish I probably could have stayed away. When I got to Jerez there were so many traffic circles and for some reason not every one had someone there to direct me. I even had to stop once for a car. Well, needless to say I had to slow my rhythm a lot due to all that and as we started the final stretch of highway back to Sanlucar I got caught. Man did that suck! I was totally visualizing staying away and finishing solo. Even though it wouldn’t have been for the win, it would have been cool.

Well, if I thought the traffic circle mess showed disorganization on the part of the race promoter, the finish confirmed it. At about 3km from the finish town one of my teammates attacked off the front. I moved up to the front with another and we tried to control the group. However, within about 1km all of a sudden I hear the group gearing up for what I thought was a charge to go after him. Wrong, it was the finish line and we were sprinting. I stood up and as I looked toward the ground I was crossing the line. What? Yep, there were no markers or anything to let you know that the finish was approaching. Oh well, I ended up 18th and was just happy it was over.

Cash In The Jeans!
One cool thing about racing here is they usually pay at least 25 deep and you don’t pay to race. So I left with 6 euros in my pocket. Nothing great, but that will buy you a decent meal or pay for gas. When I got back to Sevilla I started looking through my training log from 2003 and drew an important conclusion. I guess I didn’t do too bad considering last year I didn’t start racing until the beginning of April and I had twice as many kilometers in my legs. Well, that’s all for now. I’ve got a 130km to deal with next Sunday.

Nathan Deibert is a 27 year old, young American living in Sevilla, Spain, riding for the Campos Lorca Elite-Sub23 cycling team, and living a dream every day.

Coaching: What is it Good For?