The last time Nathan checked in, he’d just been whipped at the Vuelta a Cordoba. But what doesn’t kill you – makes you stronger! Since then he’s had three races in three weeks, with three decent results! Read on…

Ok, on to race number one:

Our Homie about the ride those poor wheel-sucking saps into the ground.

May 9, Huelma (Jaйn), Spain, 129km.
I did this race last year and really liked it, probably because I got my best result here. So, I was really looking forward to this race. The route is tough, with lots of climbing.

The first climb comes about 20km into the race and that is where the first split happened. I was in the front group and decided my tactics would be to just hide in the group as much as possible and see what happens. From our group, a small group got away up the road, but we kept hammering along hoping to catch them. The end of this race is so tough that there are two elimination points on the route. At the first point you have to be within 8min of the leaders and at the second point you have to be within 5min. If not, they stop you and take your numbers off your back. My group didn’t have any problems with either, however a large number of riders were eliminated. So, we made it through and our group must have had at least 25 riders.

This year’s route changed a little and they threw in another climb. Gee, thanks! This knocked a couple of guys off the back of the group but was nothing in comparison to the end of the race. Of the last 30km about 20km are up hill. It’s a long climb with a 7% section, a downhill, a flat section, another similar climb and then 6km down hill to the finish.

When our group hit the first climb it was like a bomb exploded in our group and there were people everywhere. I ended up with a group of 4. We made it over the 1st climb, passed Manuel Beltran (he’s from Jaйn), on a training ride, and started the second climb. On the second climb I dropped back a little to our team car and basically said “Now What?”. My DS, Manuel, looked at me and said “[email protected]#% attack them!” (in Spanish of course) So I stood up and put in a good acceleration and up the road I went. They didn’t even try to come with me.

I caught up to two more guys before we went over the top. On the way down we caught one more and then we had to sprint. I ended up 3rd of our 4 in the sprint and finished 23 of about 80 or so. Not bad considering I was thinking about hanging up the bike the very morning of the race based on a bunch of stupid mental stuff.

Race #2: May 16, Osuna (Sevilla), Spain, 110km.
I had never done this race before, so I wasn’t really sure what to expect. In the end, it was rolling, very windy, and more climbing that I expected. I started very cautiously because I had just done a really hard week of training and I wasn’t sure how far my legs would get me today. I found myself in the 3rd group on the road about halfway into the race thanks to splits caused by wind and a decent climb. On the way down the climb, I was with my teammate Ricardo and two guys from Ciclos Cabello. I surprised myself and rode off the front of the group with relative ease.

After a while, I looked over my shoulder and realized I had a good gap, so I kept going. The next time I looked back I saw Ricardo trying to solo across to me, so I let up a little and he caught me. At this point, I dragged Ricardo through the wind and over a climb or two until we finally got into the second group on the road, and came into Osuna all together. At this point I didn’t have much left for a sprint, and finished about 7th or 8th in the group and 26th overall. If I had known I had the energy to bridge across, maybe I would have ridden a more active race from the start. Oh well, next time.

Today was hectic also because my license had been misplaced and I raced under the guise of a teammate who didn’t show. I collected the 10 Euros in his name and headed home. 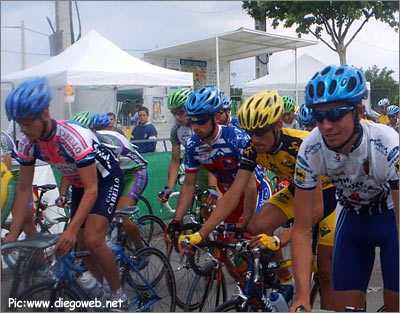 Getting underway in Йcija. There’s our boy in the center.

Race #3: May 22, Йcija (Sevilla), Spain, 140km.
This was the first race I did last year, so I knew what to expect here. Lots and lots of wind, attacks like crazy and a climb at about 90km that is pretty damn steep. This race had a decent turnout, about 80 or 90 riders and even a team from Portugal showed up. As soon as the race started, there were attacks left and right, in the pack we were cruising along between 40 and 50 km/hr. At about 50km into the race, I got kind of lucky. As I was moving up the right side of the pack, I saw a group of 10 riders open up a gap. I dropped the hammer and made it across to them without bringing the field with me. This was “the move”.

I looked around and all the local heads of state were in the group minus one. We started riding a good pace line. I felt good and took my turns at the front. As we approached Estepa, where the climb is, the moto came up and showed we only had 36 seconds. As I looked back, I realized the one missing rider from the group had come across. This was really the move. Unfortunately, I spent a lot of energy contributing to the break and when we hit the climb I was a victim of the explosion that took place. As I got over the top, I integrated in a group of 4 and we pulled as hard as we could to get back up to the leaders, but it just wasn’t going to happen. Our group was an Avila Roja, Diego from Ciclos Cabello (www.diegoweb.net) and a Cordoba, who didn’t do much work.

The elusive local “heads of state” find someone new in their midst – it’s Nathan! (he’s in there somewhere…)

After about 10km or so we were over taken by a group of about 20 riders who were absolutely flying which led us to believe they had been pulled up by somebody’s team car. Oh well.

The rest of the race was rolling and there were attempted attacks left and right in our group but to no avail. I tried a few and nothing. We reeled in few guys who were spit out the back of the lead group. We came into town and everyone ramped up to sprint for 9th place. I was spent from so many attacks and counter attacks that my sprint was pathetic. I got 17th in the bunch sprint and 25th over all.

The team was happy with my race though as I was our first finisher and at least tried to be a little more than pack fill today. Oh, by the way this race started at 5pm. Till results were posted, my 10 euros collected and in my apartment it was 11pm. Looking back at last year, I’m fairly pleased. I rode much better and took 24 min off my time from last year.

Well, that’s what’s been going down here in Spain. Thank goodness I’ve got an easy training week ahead. So, I guess maybe I won’t be hanging up my bike so soon after all. Yeah, I’m not winning but at least I feel like I’m progressing. Hasta la prуxima…

**Special Thanks to www.diegoweb.net for this chapter’s pictures***

Nathan Deibert is a 27 year old, young American living in Sevilla, Spain, riding for the Campos Lorca Elite-Sub23 cycling team, and living a dream every day. Drop him an email at [email protected]