It’s funny when it happens to other people… Greg Reain checks in with his new year’s tales of last minute global travel, Heathrow adventures, his 4 days of Christmas enjoying the German yuletide tradition of pubs and discos, FIATs versus the autobahn, and exploring a later career as a travel agent.

By Greg Reain
I arrived back here in Hamburg on December 15th, after becoming severely depressed with the steadily deteriorating weather conditions in Ottawa. I actually had to ride the trainer a few times and even sunk to such horrible depths as doing a linked computer race. The horror, the horror.

Anyways, I think taking a bit of a break ended up being a good thing as it allowed me some time to get around and see family and friends for some pre-Christmas socializing since I would once again be celebrating (or not celebrating) Christmas away from home. The Germans came through with a plane ticket and I was packed and gone within 36 hours of receiving the fax. When I first took the time to look at my ticket I was at the airport and realized that my name was misspelled, so I was really hoping I didn’t run into any overzealous airport employees anywhere along the line. Oddly enough, no one even looked twice. Security? 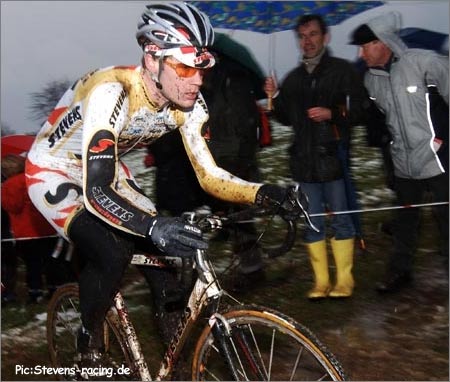 Greg in action at Herford Germany on Saturday.

1 Hour in London
I had a bit of a layover at Heathrow, so I figured it might be a good idea to look at my itenerary for the first time. What can you do in Heathrow airport for 5 hours? [ed note: I spent about 3 hours in the World of Whisky shop buying scotch, and another in the Agent Provocateur lingerie store… almost missed my flight!] Call a friend that you haven’t seen in two years and go for lunch. This is where it starts to get fun. OK, so if the Heathrow express takes 15 minutes to get to Paddington Station at a cost of 28 quid, and it runs every quarter hour, how far – in minutes that is – does it take for me to walk, wait, do I have to check in again? and where are my bags going…’you seem to go to Germany a lot for someone who’s on vacation, sir.’ Whoa, full brakes.

I’m at UK immigration control and the guy is starting to grill me a little bit about what I’m doing here, and why I want to go into the city ‘for about an hour’ with no luggage and (obviously) no address where I’ll be staying. I can tell he is pretty suspicious, and after asking me repeatedly if I am riding bicycles ‘professionally’ and me saying ‘no’ (also repeatedly) he lets me go, but I am still half expecting to get jumped partway out of the airport by some scary official-type people.

I find the right train, get to Paddington, get lost two or three times in the station itself, then sit down to a big piece of steak with my friend Matt. Apparently this qualifies as a light business lunch in London Towne, but for me it’s the equivalent of eating BBQ at 7am Ottawa time (thanks for the lunch though Matt, it was good!). So after a too-short get together with Matt, I get back on the train, blaze back to Heathrow and am once again hearing German in my ears as I sit in the Lufthansa departure lounge.

Deep Down, Everybody Loves a Fiat
When a Fiat Ducato breaks down does anybody hear? The answer is no, because they just stop working all together. Apparently. The plan was to do two Deutschland Cup races around Saarbucken last weekend, so we were driving on Friday because it’s about a 600km drive. No problem – 5 hrs on the autobahn and I thought that I had successfully managed to negotiate myself out of a driving position so that I could sleep off my jetlag. The weather sucked and everyone in Germany was going somewhere so the traffic was wicked bad and we were already behind schedule when I got conned into taking the wheel about halfway there.

Things started off not too badly, then Johannes pulled on his Colin McCrae helmet up front and started pushing it. After getting dropped more than once I decided that I was in fact in the older of the two vans because the pedal was all the way down and we were not keeping up. Now I know that 3500rpm = 150kph in a Ducato. Cool. Then the engine light came on. Johannes and Jens are way out of sight up front and the van isn’t going over 100 now on the hills, so a quick cell phone call later and we’re all pulled over. Jens does a quick test drive, deems it road worthy and jumps behind the wheel. I’m kind of like ‘dude, we need a repair shop here’, but since I am now driving the functional van I’m not really complaining. We find a Fiat dealer in Trier and the mechanic claims he ‘might have fixed it’.

Fifteen minutes later we found out exactly what that means – not fixed at all. Now the thing is only doing 40kph uphill but we’re off the autobahn and within 40km of our destination so we just drove the rest of the way and got it fixed while we were racing next day. The racing doesn’t really bear talking about, but it’s important to beat yourself up a bit to get over the jet lag and get your body working on Euro time again. 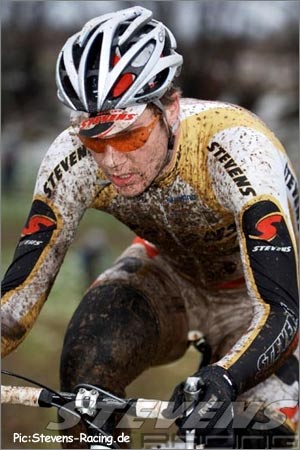 Another shot from the weekend’s racing in Herford Germany.

Christmas in Germany
Since I wasn’t actually racing this year on Christmas and Boxing Day like I was last year, I got to partake in some festivities this time around. This is how it went:

• Third day of Christmas:
Steffie and I go to Jenny’s apartment and consume considerable quantities of German beer with Hinnerk (Stevens mechanic); deftly avoided a trip to the disco. Bedtime – 3am, Hangover Rating – moderate to severe.

• Fourth day of Christmas:
Christmas dinner at Hinnerks apartment with his folks, play with some toy cars, sleep for 2 hours and wake up at 12.30am, fresh and ready for the disco. Out with Jenny and Hinnerk, hit a hiphop night at a dope club in an old train repair shop under the U-Bahn track, but it’s a dead scene so we transfer to an upscale techno bar where Steffie and Hinnerk soon abandon me for talking to a very nice German girl. Bedtime – 4.30am, Hangover Rating – mild, Fatigue Level – astronomical.

Somehow I managed to train through all the merry-making and I’m actually starting to hope for some racing now to give my body a break from the partying. I’ve learned many things in the times I’ve spent in Europe, but one of the most important is that we really cannot party in North America. Sad, but true.

Someone, please find me a travel agent
Things are getting a little busy right now, as I’m trying to organize start contracts for racing in January in Belgium as well as making travel arrangements for January and my subsequent return to Canada in early February. Somehow I have to get from Belgium to Hoogerheide for the World Cup, then from there to Zeddam for Worlds, then from Zeddam to Hamburg, all with out owning a car or being able rent one in Belgium and return it in Germany.

I think I’ll be able to make it work, but it will be a real patchwork of getting rides from A to B and filling in all the gaps with random hotels. Not normally a problem, but with two bikes, a bunch of wheels and, oh yeah – clothing, it gets a little more difficult because the train is not really an option anymore. I’ve already got the Germany to Belgium thing dialed, as my friend Dave Coughlin will be coming up to a C2 race in Herford on New Years Eve, then we’ll go back to Belgium together from there.

Why Belgium? Well, I’m really starting to dig living in Hamburg, but there is not much on the schedule here in Germany, so it makes more sense to be where the racing is and Flanders is a much better base from which to race in January. I’ll be staying in a house owned by a couple of British people with Dave and in all likelihood Barb Howe of Velo Bella fame and her boyfriend Josh. I stayed there for one night after Worlds last year, and it is situated in a really cool small town just north east of Leuven (where they brew Stella Artois) and in the heart of Flemish cyclocross country. Sven Nijs lives about 15km away, so it must be the right place to be, no?

That should keep me occupied for a little while…

Be sure to check out the blog (Crazyfast.Blogspot.com) for some day to day ramblings.