Back for an unprecendented 3rd season on PEZ – it’s the original Homeboy – Gregg Germer! Gearing up to get back to Belgium and keep the “pro-drive” alive, Gregg’s prep is well underway in Texas, as he looks to begin another seaon overseas…

The Sweet Sweet Pain
The start of the season brings the first sweet sensations of pain to the legs. It’s a sensation I look forward to every year … the strain on the legs, intense thumping of the arteries, grimaces of pain and pouring of sweat. Although the season begins long lost feelings of pleasure and excitement those first couple of races are always the hardest. It’s a time when the unknown reality of months of winter training are quantified into a placement into the peloton.

My start of the season commenced with two races on the opening weekend of the TXBRA racing series in the Austin area of Texas. The first day’s race in the small town of Walburg turned out to be quite a hard race with a nearly 100 strong field containing a mixture of strong local talent and a some professional riders in the Texas area for the mild weather and good racing. I was a bit hesitant about my fitness, as I always am with my first race of the year, but I survived the race to finish with a respectable 17th place.

The general gist of the race was having the in-form rider’s drill pace in the first of three 24-mile laps during the crosswind, create a break and leave the field behind hurting and disorganized. The lead breakaway of 8 stayed away for over a lap while the pack finally became organized and with the coordination of Team Luck Lounge reeled in the break. Of course we catch the breakaway right as we hit the crosswind section for the second time where the break originally broke away. So what happens? The same breakaway riders attack again and the field ends up in the same position. I think all but one of the original breakaway riders made the second break.

During the whole race I felt good, but never great. My legs were still lacking that snap you gain from racing and when the moves went I wasn’t able to punch the pace to put myself in the proper placement. But I do have to say I felt very good in the crosswind section when the pace was consistent and steady, even though it was hard. It really reminded me of being in Europe stuck in the gutter, kind of felt my best right then.

The next day was my favorite road race in Texas, Pace Bend. Despite the high entry fee and the 8 bucks to get into the state park the race was well worth the money. The organizers put on a quality event with the local TV station doing a short live report, live music, no yellow line rule, a great prize list, podium girls, free food, a rock climbing wall and even a keg! Kudos to the organizers, but for me the race was merely a training day. I tried one early breakaway attempt and couldn’t keep my speed going. The previous days race killed me and at the finish I tried following a rider who ended up in top ten but couldn’t hold his wheel. 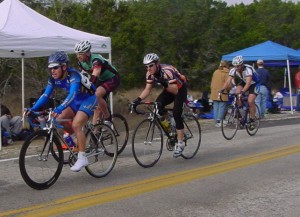 So with a bit of an ambiguous start to the racing season I knew I was in shape, but not quite in form. The following weekend I made sure to show up to the Tunis-Roubaix road race in College Station, Texas; a bit more rested, which seemed to do the trick. I had done the race before, four years ago as a collegiate rider, so I knew to expect the three miles of dirt and pothole infested backroads, the five or so miles of rough roads and the windy exposed farm to market roads. 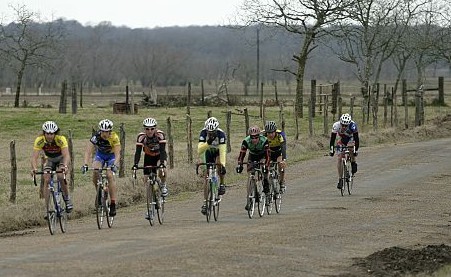 The Pro. 1,2 field split up on lap one. Photo Credit: David Riggs

The field was only 35 at the start, but we started off fast and hard as we hit the first dirt section. The field slimmed it’s self down to about 12 riders only 10 miles into the 80 mile event. The second time around I put in a hard attack to further shed riders and distance the lead group from the chasing field behind. I was feeling spectacular and knew I was on good form, so I continued attacking hard but reserved my energy enough to last through the distance and wind. 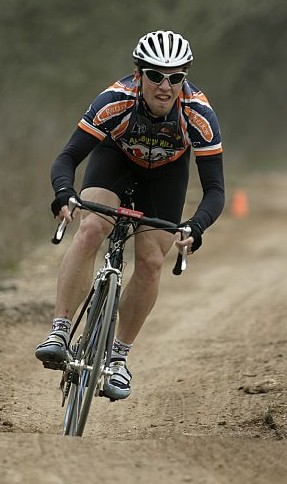 Then lap three of six came. As we hit the dirt section I smacked head on into a pothole and flatted my front wheel. No problem, as I changed wheels and made contact with the lead group without to much problem. Just after we made it out of the dirt section I went back to the wheel truck to make sure they picked up my front wheel … and what happens, a rear flat! So once again I change wheels and start to chase … I am only about 50 meters from the lead group and the wheel truck when I hear another loud bang when I was going through a corner, another flat on rear wheel. So many small sharp rocks on the chip rock road!

So by this time I decide it’s not my day to be racing and slowly ride in the flat. I thought about riding out the flat to the field (it was possible) but I was on someone else’s nice wheels by this point and didn’t want to mess them up. So a DNF result, but I found my form and the snap in my legs. In fact it was the best I had felt on the bike in about three years. I finally saw the winter miles and training take form.

So I am ready for the season, time to hone in the speed and power, and prepare myself for Europe, only 24 days and counting. I will be racing the local Texas events each weekend and also trying my hand at the World Cup Qualifier race for the track in Houston. I figure I should do it since it is only 2k from my house and I did start on the track. Plus I enjoy using the track training to sharpen my sprint and attacking skills.

So till next time, Tot Ziens

Armstrong Vs. Pound: Words Are Not Enough

Coaching – What to Look For