Homeboy: Settling In To Belgium

– By Gregg Germer –
This week was my first time to visit the impertinent country of France. Currently the subject of much negativity in the US given current world affairs, I was curious to see the reception our all-American squad would receive. To my surprise I didn’t once have someone ask me why I wasn’t in Iraq fighting for my country. In fact the whole time I was there no one even mentioned the war in Iraq or any of the related. I was happy to have it all business and the usually multi-lingual curses and internationally similar sounds of protest for the very sketchy racing accustomed to France.

I wish I had a report about how well the race went, my exploits in helping drive the break and my eventually top placing at the finish, but no such luck this week. The race was a little too long, by like let’s say… 60 kilometers.

For the first 80 to 90 kilometers the race was by far the best UCI race I have ever raced. Just as last week my plan was to ride the front, not to attack, but to follow the breaks and keep to the top 30 of a 160-person field. I followed my plan to the “T”‚ and kept awesome position the entire race. At times I even began to wonder if I had teammates left in the race because I didn’t see the red, white and blue of the ABC-Aitos uniform for a while. Soon the hills started to put a sting in my legs, the crosswinds put a hurt on me and I was starting to feel the fatigue build up. In five minutes I went from comfortable to just about dead! I went backwards while riding forwards somehow; well that’s how it felt. I was done for, nothing left in the legs and I was shot. Damn this fitness.

In all a good race while I was in it, but to make it a really good race I need to finish. I did however avoid breaking my wheels during the race when the riders in front of me were so kind as to not point out a median in the road. 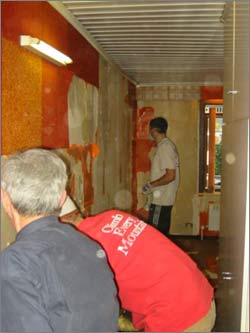 Actual shot of the boys “retro-fitting” the 1960’s palace.

There’s No Place Like Home
Onto other events of the week. The house is finally coming together and it’s already starting to feel like home. There are still a lot of little things we need to do to make it 100% ready, but they are going to be done in the next two weeks. 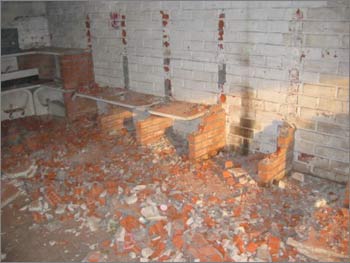 One of the highlights for me this week was going after some (read as recklessly destroying) brick shelving in our garage. I would be lying if I said it wasn’t fun, because it was. It fed that primal male need to just hit stuff and watch it crumble down. Also using a big old Bosch jackhammer made me feel like Tim Allen from Home Improvement‚ and the quote “more power!” 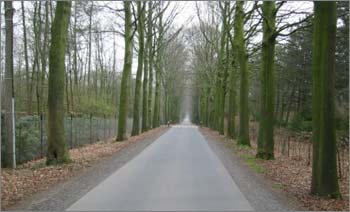 The house is just on the edge of the largest forest area for West-Flanders. It’s not that large, but it’s a very quiet area with so many different roads to ride I am sure I could ride here for 5 years every day and still end up finding a new farm road to go down. That is one of the reasons I like it here so much. The amount of good roads to ride on and the possibility to ride so many different routes is great. Back home in Houston I have to ride the same route to get to the safer roads of the country and by then I still am limited to a couple of the different routes.

The house is now almost full with a total of 15 guys here and two more set to arrive in two weeks. The racing program is getting crazy and I don’t foresee and lack of great racing any time this year.

Well that is about it for the week, so till next week.