HomeGRRRL: Out Of The Storm

The last time we last heard from Rook Campbell, she was still adjusting: both to the pace of the euro-women’s pro speeds, to life in Europe, and to her Italian team. Things got worse – but she’s bounced back with a new team, new digs in Florence, and some cool postcards of this festive season in Italy. 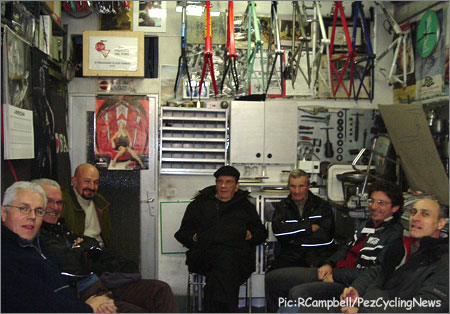 • The Old Boys of Le Due Route (I call them ‘i ragazzi vecchi’ (old boys) – these guys do the talking. They always seem to know just who I have ridden with, just met or about to meet, what I ate, they don’t hesitate to tell you just what they think. They hang out in the mechanics room every evening. Sometimes with fresh olive oil to drown a little bread, a little grappa, and they say they don’t race, but they are the most racey year round people I have ever known. A quality mix of cycling heros line the walls, mixed with the selected hottie woman of the month, bikes, wine, tools, olive oil, all the perfect things of cycling, collective billion+ km in their legs with double the stories. You can just show up and sit and chat, or just sit and leave. It’s my favourite shop, and it’s a home. They think they keep me in line, or at least that is their self-appointed job, even if I don’t need it.

• Andy gets my castoffs, like these ripped shoe covers, which I tried talking up as better cause you can adjust your buckle. Andy is Scottish, and at times, perhaps only one of us speaks English, so we go with Italian. When my stuff fails, and I get the rations from my team’s leftovers, or the special gifts of clothing from some of the local teams I train with, like my favourite Team Demonia (thanks for the jacket guys), Andy gets my castoffs, as he’s worse off than me. Here, you can see my old shoe covers with the nice tear which still serve him quite well[Note: see hilight in red. Ed.]. You should see him in my winter jacket. Tuscany isn’t all sunshine, so we’ve put in more than a desired share of trainer time, one trainer between the two of us, so the apartment below us might just get a nice ceiling vibration mixed with our tunes, though the super thick walls are kind of good for keeping the peace, even if it makes cell phone reception suck.

• Here is a random city shot. I’m kind of digging the Christmas lights a whole lot. It’s day time, but you can see the streams over the road, and just imagine a whole city, all streets a little different. It’s pretty sweet.

• Way too many tasty treats, but a totally rocking lunch. Veggies cooked in surprising ways, classic pasta dishes spiced up, or a lean ‘seconda’, a little chicken. Sometimes a chicken curry, or gulash. Caffe and tea, pretty staff. Window to pastry shop, where totally schooled and inventive pastry chefs are always whipping up what is too often not the best thing for going fast on a bike, but it’s where you’ll find us on our treat days. It’s a new place, so my best friend and I justify any excessive goings as supporting new business.

• Rosetta and Giuseppi (mother & son) – when stuff like booties deteriorate and the replacement stock isn’t at hand, you get to know your community better. The shoe cobblers have hooked me up by restitching the ripped zippers, and I was given surprise patches and stitches for the holes, too, thankfully, not the cleat openings, though. Hope this to be remedy of wet frozen feet, which hurt much longer than the time on the bike, even ruining a good shower afterward.

Rook’s Notebook: Getting From There To Here

The Fanini Disaster
Okay, I’ve had a little stint of absence from Pez, as the season took shape a little unexpectedly in its last months. It’s difficult to say exactly where the season’s craziness began. The story may be dated way back, perhaps back in the days of downtube shifters. The Fanini team appeared to drop like flies, as the roster had a termination or abandonment of just about fifty percent. Perhaps, “short man’s complex” provides a proper analogy to designate what happened with the team, that is, the team aside from the racers. Maybe it was the winless season: second place finishes weren’t enough pump, and the madness began in full fury.

In thinking back upon these more ugly backstage goings on, I prefer to simply dub it like a time period, the “Fanini disaster”, as if something deeply brewing just lept out and then passed. The Cliff notes would read like this: threats flew, contracts were broken, salaries were not delivered, replacements arrived, replacements were given the boot, racing licenses were confiscated, team transfers were blocked, tables and chairs took air, and police/carabinieri reports were filed.

The UCI stepped up to the plate with advice, support, and promises for accountability. In the name of protecting racer rights, talk of delivering team sanctions circulated. At the end of the day, the UCI apologized for its powerlessness and lack of resources, as the lawyers were swamped in working with men’s pro racing causes (which at the current time, naturally encompass a bigger world of economics and business).

Wearing Through the Tread
With an in-between season teamlessness, the weathering of the bike happens, a physical reminder of need. Broken stem, rotting tape, the beyond a little hub movement right and left, the broken computer, the list grows way too quickly. The zipper failed on my vest, actually launched off, and yes, I stopped and scavenged it back. The love of safety pins from my punk rock days serves me well now in this cause. I am victim to rotting lycra, a little lycra transparency victimizing those behind me. I started thinking of selling my birthright, if I had one, to join the first team that just offered clothes for winter.

The UCI Beyond Pee Police: Professional Racer Rights and Protection
The consequence of not having a properly empowered UCI and rider’s union is that wrongs, rule breaking, and violations of contracts continue too easily. Much further, nastier abuses appear in women’s pro cycling, as racers can find themselves dependent, resourceless, and often as powerless foreigners in a host country.

My experiences opened up an unexpected look into the scope and need of the UCI’s governing. On a very serious note, athletes can be vulnerable: teams, sport staff, and coaches possess the ability to manipulate, control, and harm riders, many young and desperate pursuing their passion and dreams of racing while sometimes also desperately escaping from what was or wasn’t in their homes and/or homelands.

In such cases, not cycling, but humans show an extremely ugly, degraded face. The “Fanini disaster” was light in comparison to what I learned existed in the conditions and abuses of a few of my fellow racers. Quite honestly, I was sickened and shocked to see how devastating a lack of professional protections can deteriorate and harm female athletes. For business reasons and more importantly for protecting individuals and women, the UCI needs to be strengthened with the proper resources as a governing body that can, indeed, protect our sport and athletes.

While sport is politics, economics, and social: for us athletes, crusades don’t really make us go any faster. Words and writing are great, but we prefer to write with our legs. Cycling’s New Year’s resolutions are made in November, and this is really where I am. But I’m also in the Florence, city center proper. An urbanness, the mix of diversity and infinite newness in cities, it’s in my blood. The seeming contradictions of traffic and sudden opening to great training lands, distraction and tranquility, friends and strangers makes it a good fit for me.

Past has gone that little funky time of the year, the structured unstructuredness of training. I’m out with new training partners, the old boys of Le Due Ruote bike shop, the boys of team Demonia. I’m learning the routes of a new terrain, which each here declares: “This zone – Florence, Greve, Chianti – is THE best region in the world for training”. Italians remain ever romantic, and cliche to boasting their regions superior to the next, even if only one kilometer separates the two.

Team Fenix Colnago
Alas, the team brewing is actually not a last trade for clothes. Though the arrival of some warm clothes, and animal print at that, is a snappy climax. Nope, thank goodness, for had this been January and not November, then maybe that would have been the case. But the team is all the dreams of newness and promises of a little dynamic becoming and racing. With a new title sponsor, new roster, new race schedule, Team Fenix Colnago is going to debut next season with some quality surprises of strength and teamness.

A little thrill for me in thinking ahead to next season is the elite time trial series: I’m all for working on your weaknesses, but if you never get to race your strengths, then what is missing is huge. My team understands this, and while the Colnago and team mechanics were configuring my bike fit, my director’s insistence that they pay extra special attention in making me a TT bike was a reminder of my long missed TT, which was absent all of last season. To have a team that believes in you and does so in an active few steps ahead way, wow.

Me and Clay Mankin – no proper words for Clay, in memory… The photo was on my camera, and I’m forever thankful for all the great shared times and memories with Clay, incredible person… and upon seeing this photo, I am reminded of some cool holidays with Clay and at City Cycle (where I use to work when I first started riding a rode bike, 2002)

At City Cycle in San Francisco, we had a winter solstice party. Clay Mankin usually had a hook up for everything, like a properly smooth jazz band. The City Cycle crew kicked back with some of our coolest customers, friends and riding buddies made for a very not so company party feel, where we were kind of baking in holiday spirit or tradition: good eats, friends, tunes, and stories of bikes, nothing, or life. Winter Solstice at City Cycle was traditional.

See our message to Clay here.

Rook Campbell is a 28 year old American pro racer living in Firenze, Italy. She infrequently shares her experiences of the road grit, euphoria, and stupor of being a professional cyclist in Europe.
You can email her at [email protected].
Like PEZ? Why not subscribe to our weekly newsletter to receive updates and reminders on what's cool in road cycling?