American pro Rook Campbell checks in after her first battles with the Spring Classics. Turns out the cobbles did not greet her as warmly as hoped, but what doesn’t kill you makes you stronger – and she lived to tell us about it…

Tour of Flanders
I had the rather miserable lot of finishing in a manner I hate to admit. The sag wagon caught up with me, and in Belgian, I was told that I had to remove my number. The rolling sagwagon caravan was a lonely place, though we numbered too many. I popped on the first pave hill, but it was the dangling and fighting the wind solo that really did me in. I thought I must be the last racer out there, but then someone would fly by behind a motor.

The Michela Fanini team at the Tour of Flanders start.

After this happened three times, including a mini peloton drafting behind a car, I realized that I had just made a rather fatal mistake. Knowing when to immediately take a car escort, within reason, is a skill of finesse that all European pros seem to know. The line of what is acceptable drafting was one that I just didn’t quite grasp. From my hotel room, watching the Basque Tour and other spring classics, I have seen more of this little tactic. I cursed my stupidity for fighting fighting fighting solo and then leaving nothing to grab the next wheels, though it turned out we were all sagged in the DNF lot, a rather ugly state of being.

Back of Team Van Cooking: that’s Paulo cooking our pasta- because no one knows how to cook “al dente” like the Italians – so we do it ourselves.

What happened in Belgium? In our Tour of Flanders, wheels broke, the pave happened, pedals and cleats broke, the pave happened, the Belgium and Dutch riders knew short cuts that looked like routes of death to the left of parked cars on the left side of the road, the pave, bike changes lacked pedals, and chase groups were directed up the wrong roads. I wasn’t in this off-course detoured group, but a friend from Team Nobili told me how she was dodging people and cars, racing all out while not understanding the radio news.

The whole episode sounded like a messenger race, where I remember racing down one way streets against traffic in an urban on bike scavenger hunt. The race wasn’t all chaos, though. It’s not at all right to finger point or curse the Belgium race – except for the bad routing. The truth is, the race wreaked havoc on us. The pave. Watching videos or coverage of spring classics had left me feeling impressed and respectful of the pave, but not like now, having raced upon it. Now, I just don’t know, it’s not fear, but something else. Thoughts and anticipation and racing on pave are serious.

I was utterly not prepared for Belgium and the pave. Now, the thing I must think is: race all out in the first five minutes, fight for my life, then again another10K later, and then the race begins, and then I fight the same like normal. Seriously, here you have to race from the gun and at all times. There’s no easing into it. If you don’t race the flat, the cobbles, or a climb like it is THE big deal, then you’re done. You won’t actually get to make it with the race to THE big deal. 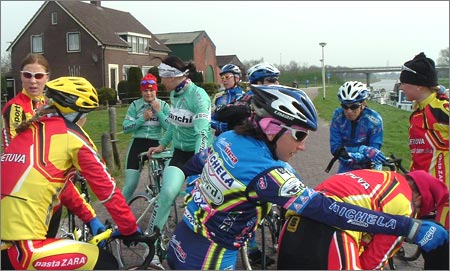 Training ride at Tour of Flanders – seems everyone flatted at the same time.

Edita Pucinaskaite appeared in my hotel room with an Italian cycling magazine that previewed how the pro men’s bikes are rigged up for Paris Roubaix. I surveyed these images with a new yearning and comprehension of just what the body feels on these sections of road and just how much work can be done on the bike without the sense of forward motion, much less speed. Thank god for the oompha polka bands and beer drinking swarms of Belgians and cycling fans who love nothing more than to cheer you on, refusing to let you think of nothing other than race, race, race. Belgium humbled me, leaving me without the kid at Disneyland euphoria. Belgium awaits our return on 20 April for GP de Wallonie. Each time I meet something completely utterly new, the climbs, the pave, or the wind, we can all talk about how incredible, but then I am told that the next time is more.

Also, here in Holland, pave awaits us, as we have three days of racing Ronde van Drenthe, but it will be different without the hills. Perhaps an equal opponent here is the wind. Just as I did not know what pave really was, I have not known what real wind is. The wind in Holland is insane. You can be blown off the road. When a big truck passes, if it blocks the wind, then once it has passed it is like a wall. You are either flying with a tail wind, or poking along, or riding leaning left or right hard just to ride upright. One evening the team went bowling, and I swore that I was still anticipating this wind, as I guttered a rather large proportion of my bowls. After passing loads of pelotons of kids biking to school, I was thinking that every kid must use the wind as the ultimate excuse for tardies or maybe even for whole day’s absence while possibly playing hookie.

The face says it all.

Ronde van Drenthe
Today was stage one of Ronde van Drenthe. We had what has been dubbed a “false pave” for it just doesn’t really seem like much in comparison to the more severe cobbles we have seen and will see more of soon, like tomorrow and the next day. I was feeling rather spunky and seeing a solid top finish for me or a hand in a victory for my teammate, Longhin, but with two kilometers to go, I had some very seriously large hip throw me off the road. I went through mud mobiles, feeling any minute I would flip over, but fortunately, I just stuck after three mobiles. Returned to road, chased back up through back of group and race was over. Good warm up for tomorrow, which is when the race really begins.

I tried to answer questions from autograph seeking young Dutch fans, but instead we exchanged a photo of them for a autograph from me. Racing here is different everywhere and all the time.

Rook Campbell is a 28 year old American pro racer living in Lucca and riding with the Michela Fanini team. In the coming months, she hopes to share her experiences of being a professional cyclist in Europe on a women’s team, and to deliver a little of the road grit, euphoria, and stupor that comes her way. Send Rook some love at:
Rook Campbell [email protected].