With the falling leaves comes time turn over a new one – in this case the welcoming of a the newest of our HomeBoy diary from Canadian ‘cross & road racer Greg Reain. Reporting in from the Deutschland of pilsner and bratwurst, please put your hands together …!

Who Am I?
My name is Greg Reain and I am currently living in Hamburg (that’s in Germany folks) and racing for the German continental team Stevens Racing. We like to call ourselves the “Stevens International Cyclocross Team”, but the UCI would probably tell you otherwise. We are easily distinguishable by our hot all-white team kits, which look really pro when it’s dry but I’m sure turned a few eyes away in disgust during a full week of rain at the Tour de Beauce in Canada in June. 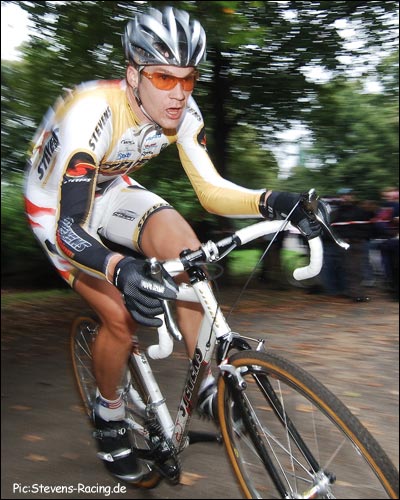 Greg’s biggest challenge has been keeping the white Steven’s team kit from getting wet (and the horrors that brings on) – not an easy feat on the ‘cross circuit.

This is my first season with the team, after racing mountain bikes with Gearsracing.com GearsRacing.com in Canada for a number of years. When not here in Europe I live in Ottawa, Ontario (that’s in Canada folks!) and generally try to avoid winter there because it sucks.

How Did I Get Here?
It all started as a really last-minute decision in the fall of 2004 after I made the Canadian team qualification to go to cyclocross Worlds in Sankt Wendaal. I told myself before Nationals (which were in early November) that if I qualified, I would go – no argument after the fact. Then I discovered a friend of mine was going over to Belgium in December and had a place to stay and everything hooked up. I thought it might be good idea to get a little practice before Worlds, so I bought a plane ticket and flew to Belgium on about three weeks notice and started racing.

At that time we were living close to Oudenaarde and getting some help from the Flanders team guys which made life a lot easier. I was there for three weeks, then moved to Holland for the month of January before getting my ass kicked at Worlds and coming home. I guess I didn’t get that discouraged because here I am again.

Who’s Your Team?
So, about the Stevens thing? Yeah. There was actually some talk about riding with these guys last winter, but it just didn’t work out logistically. Here’s the scoop – I was really bummed out about the whole mountain bike racing scene in North America at the end of last year, and wasn’t too sure what I wanted to do in cycling anymore.

But after spending some time racing over here I knew that this was the place to be, so I decided that a switch to the road/cross thing was in order. I started the road season in Canada with a provincial trade team, Cyclelogik, and things were going pretty well but I would not have access to the big races with that team. My management agency, Revolution Council, hooked up the Stevens gig as a way to get me to the Tour de Beauce in June.

That didn’t go so well for me as I left the road at 65kph in a heavy cross wind on the second day and almost broke my neck. Good way to meet your new team! I did gain a certain amount of notoriety on the web for that little escapade though. Finished the road season in Canada, then came here to Germany on 5 September of this year to get the ‘cross season rolling.

So What Have You Done For Us Lately?
That’s probably enough of the boring stuff, so maybe I’ll tell you a little something about what I’ve been up to here over the last month or so. First up was a training camp in the Black Forest for weeks. That was a super-cool time, until I got a really bad allergic reaction that had me all swollen up in lots of weird places. After a couple days of real discomfort we went to see the doctors at the University hospital in Freiburg who take care of all the big German pros, so they know a little bit about cyclists. Still, no idea why I got sick though. I got to spend some real time with my new team mates, and found out that they are pretty cool guys. 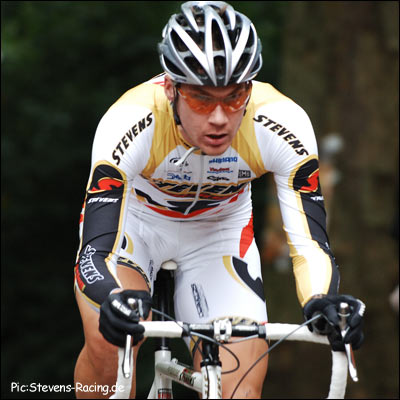 Blazed back up to Hamburg on the autobahn to my new apartment. Hamburg is a pretty big city, so I always have to train with someone if I don’t want to get horribly lost. I also can’t speak enough German to ask for directions home either. I am now starting to get the itch to race, since I’ve been in Germany three weeks with no racing.

The season has already started in Belgium at this point and I can practically smell the racing from here. I get a bit of a fix racing a night criterium and get to test my legs for the first time – OK, I have some fitness! Cool! Kept it upright on the interlocking brick and that was a minor victory in itself. One of our guys was in the break and made it home in fourth place, which is good but not good enough for us.

Another week of training, crashing and enduring the laughter of my teammates. Hey, it’s easy to stay on the bike when you know all the little bumps and turns, guys. That’s allright, I just try to push them a little in the corners and it freaks them out and makes them ride a little harder!

Finally, finally, I get to race my cross bike for the first time at Harderwijk in the Netherlands on 1 October. It’s a long drive there, but totally worth it – a really classic ‘cross course with lots of tight grassy corners, some stairs and a perfect mix of pavement, grass and wind. Prima.

I start to get really nervous when I see Sven Nys and Richard Groenendaal rolling around in the warmup laps. Crap! I thought I’d be safe in a C2 race in Holland! I had an awesome start and made the lead group anyway, so that set us up with a good gap to the chasers on such a tight course. Needless to say I got tossed out of the back of that group in short order, but I ended up riding the rest of the race with Tom Vannopen and a couple of other guys to finish 17th.

Two days later and we are in Berlin, checking out a very insane little piece of German cyclocross course design. This was also a C2 race, so I should have had a good second row start position but I guess they missed my name on the UCI list so to the back I go. Moving from 60th place into the top ten is a virtual impossibility on the widest of courses, and this one was very fast and 80% narrow, twisty, damp and mossy pavement walking paths. Sketch. 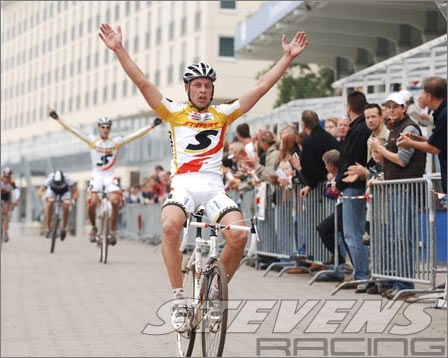 Managed to get into 21st position and flipped over to cruise control since there was no way I was going to make it up to the next group. Felt good about my form, but frustrated with the start. Good day for Stevens with Christian Heule taking the win and Camiel van den Berghe 3rd spot. Heule says- “Don’t let them tell you where to start, you tell them!” OK!

That brings it pretty up to date on the racing front. Stevens is sponsoring a C2 race here in Hamburg on Sunday 9 October, so we will all be there. I will implement the Heule start position axiom and make sure I get in the first two rows. The racing schedule has been pertty light so far, and will continue to be until I make my trip back to American shores for the Gloucester USGP races and then Canadian Nationals on November 5th. The season doesn’t really get rolling here till late November at which point I will return here, hopefuly sporting a very nice Canadian Champion custom skinsuit. In white, naturally – UPS is calling, your package is ready! Ouch.

Be sure to check out the blog (www.crazyfast.blogspot.com Crazyfast.Blogspot.com) for some day to day ramblings.

WIN: Lance’s Autograph On Your Item