The 2004 season is breathing its last gasps, and pros, amateurs and the rest of us are getting ready for a little r&r. Even Ben Clark, our second last Bloke in France is packing his apartment into his car and heading back to the Queen’s England, and a winter on the track…

Well it’s that time of the year again, when I start pulling stuff from underneath my bed looking for my duvet only to find it’s gone mouldy! Ewww. Yup, autumn is here which also means that my racing season is practically over and I need to make the trip back to my long-suffering parents in England.

Last Sunday, I finished in the counter attack in my last race in France and also discovered that the entire French racing scene is made up of complete liars! At the start line, they were all saying oh, I have no motivation, it’s too cold, blah blah blah, next thing you know, I am in the break, it’s the fastest race the organisation has ever seen and my legs are killing me! That’s the last time I trust a Frenchman! Oh, did I forget to say that the entire 145km was into a headwind grovelling in the gutter? 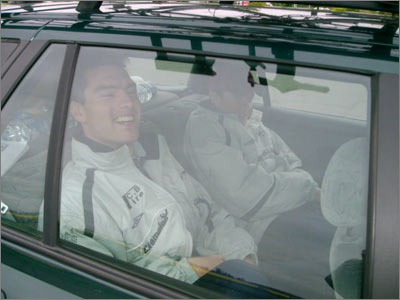 The following Saturday, I packed my entire flat into my tiny red car (which meant I couldn’t see out of the rear mirror and that the front of the car was half way in the air which made driving somewhat strange). 8 hours later, I was curled up in the cafй on the ferry fast asleep, my trusty mp3 player singing merrily to its self. After 24 hours of travelling, 15 double espressos, 25 cokes and god knows how much chocolate, I staggered into my front door, not quite knowing where I was and slightly worried that everyone was speaking English.

Being back in England also means having to work. Bit of a bummer, but I love my job. I work in a bike shop (unsurprisingly) but it’s awesome. I have a great team to work with, the shop atmosphere is brilliant, the clients are mostly cool and I get to dribble over new bike bits before mere mortals even dream of it!

Getting used to England is going to be hard; I hate the rain, the cold and the miserable people. I will miss the laid back French attitude, the real coffee and my amazing teammates. Roll on Feb 2005!

With winter training coming up, you so need to get a decent mp3 player, else you’re gonna be listening to the same old tunes over and over again. And what better to fill it with than the following:
– Ashlee Simpson – Autobiography (yes I know its girly and yes I know I have prob lost most of any remaining respect you lot had for me, but at least you can sing along to it in those dark, wet country lanes!)
– Blank and Jones – Substance (you may have noticed, I like Blank and Jones, just a tad. Bangin trance makes those hours roll by)
– Five for fighting – The battle for everything (kinda old album, but brilliant tunes)
– Kelis – Tasty (Good beats but will someone please explain the milkshake song??)
– Leslie – Mes Couleurs (French r n b artist. Stunning voice and brilliant backing. Worth a listen)

No hard winter training session is complete without a decent DVD to fall asleep in front of, so here goes:
– Eurotrip (hilariously funny teen movie)
– Torque (Fast and the furious but on motorbikes and more plot)
– Stigmata (how awesome is this film)
– 28 days later (the only film that has scared the living daylights out of me!)
– You got served (Hip hop dance movie. Easy viewing)

And remember, wear your Pez socks with pride!