Rider Interview: To be twenty-four years old and doing what you love is a dream most of us don’t manage, but young trackman Stephen Bradbury was ‘living the dream’ pounding the Copenhagen Ballerup velodrome boards in last week’s ‘6 Day’. Ed Hood was there to talk to the man from Reading. 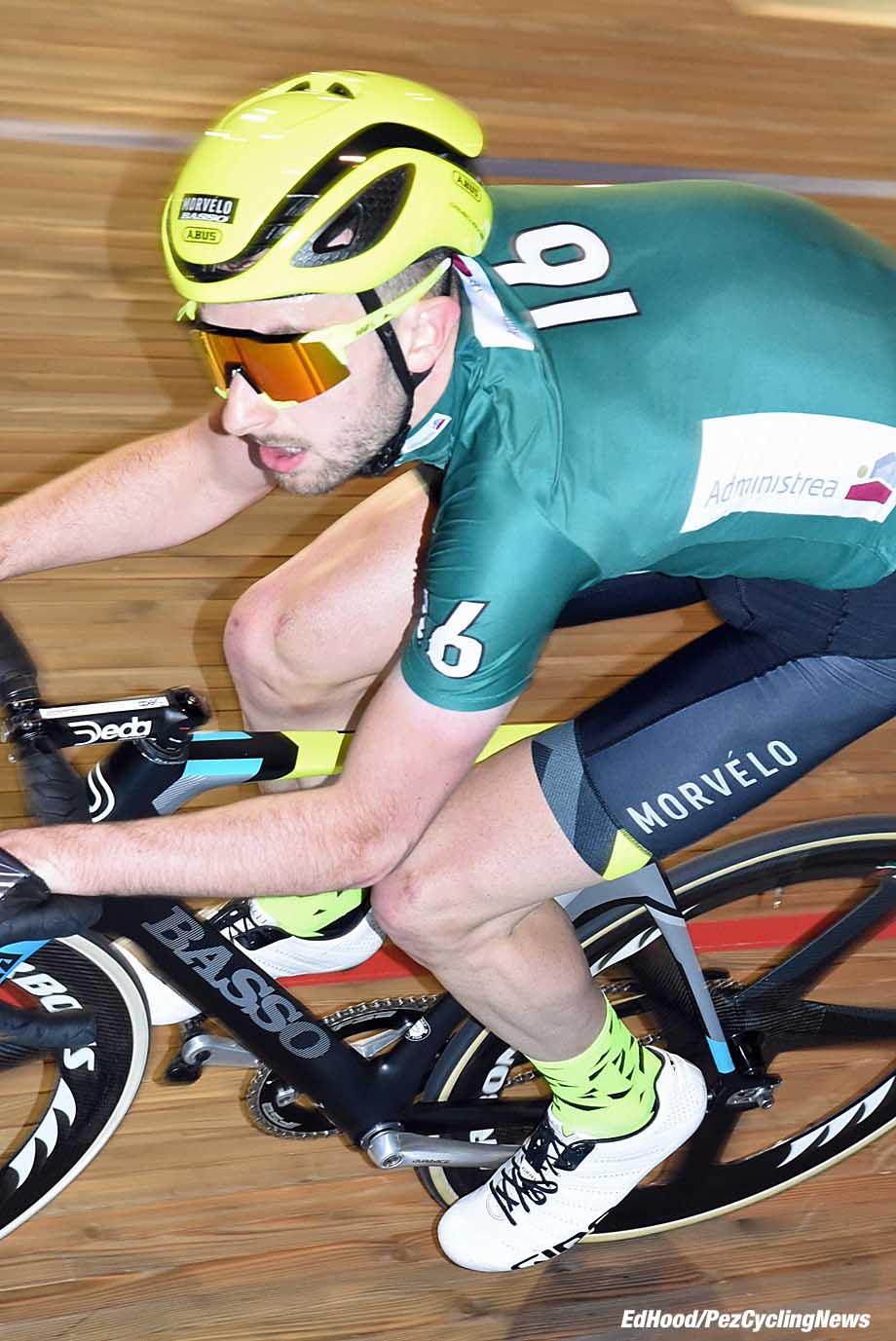 When my buddy Dave and I were youngsters, back in the 70’s we used to discuss whether we’d like to be Tour de France riders or – six day men. We’d go to London for the ‘Skol’ six day and the Kuipke for the Ghent six. It was ‘no contest’ – the bright lights, the pretty girls, the speed, the disco music pumping, those tanned legs getting rubbed between races, the silk jerseys shimmering in the chases and those track bikes, the spokes gleaming like jewels. Gianni Motta’s Masi was all chrome, a thing of beauty.

But from the 60’s through to the 80’s very, very few British riders managed to infiltrate that elite group of men who made a good living on the boards – Norman Hill, Maurice Burton, Nigel Dean, Tony Gowland, Hugh Porter and most successfully, Tony Doyle.

But seduced by watching the Gent and Zurich Six days as a youth, there’s another British name circling the boards of the Ballerup Super Arena here in the Copenhagen Six Day – his first ‘race to nowhere.’ Stephen Bradbury, is 24 years-old and from Reading, home to a famous old track. Here’s what Stephen had to say as he and partner Marc Potts awaited the start of the 75 kilometre handicap Madison on Monday evening. 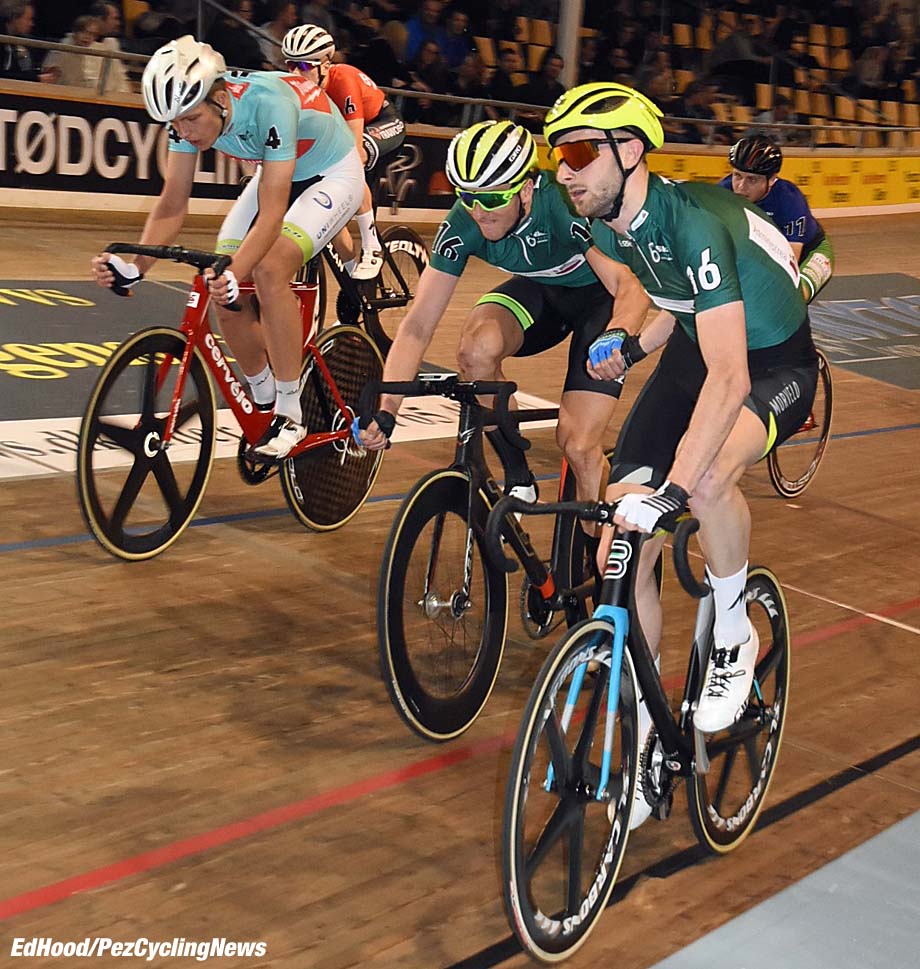 PEZ: What sort of results do you have back home, Stephen?
Stephen Bradbury: Nothing special to be honest, I won the Totnes stage race in the south west and I ride the Reading and Lea Valley (London Six Day track) tracks regularly.

PEZ: And you ride for the Morvelo Basso team?
Yes, it’s a British Cycling ‘Elite’ team, we ride in the televised Tour Series criteriums in the UK but they’re good in letting me pursue my track ambitions.

PEZ: The British track nationals were held the other week, did you ride the Madison?
Yes, we were sixth but my partner was called up to go to training camp at the eleventh hour so it was a bit of a last minute thing to get another partner. 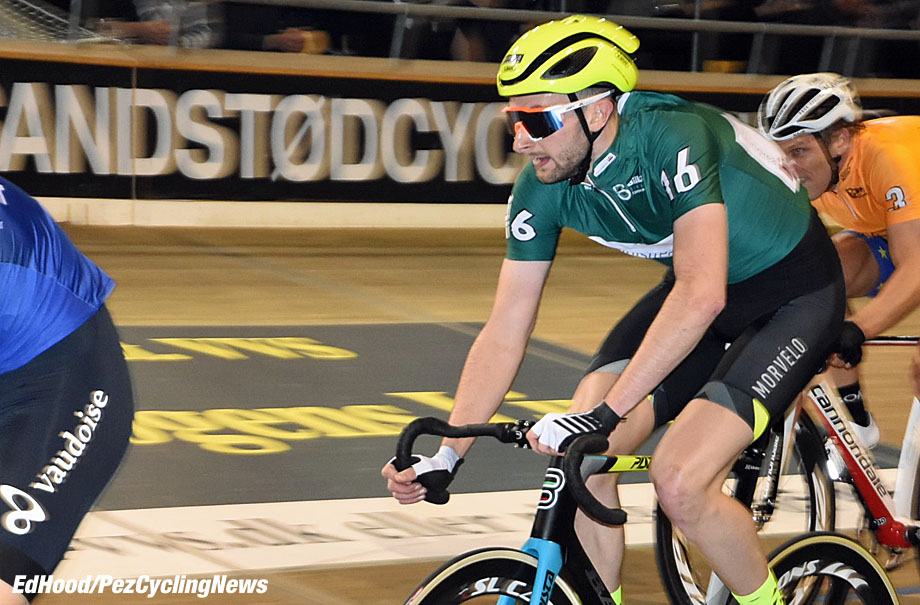 PEZ: Why the six day fascination?
I remember going to the Ghent Six Day when I was a teenager and was fascinated by it all, the atmosphere, the colour, the speed – I thought to my young self; ‘I want to do this!’ We didn’t see the finish of the race, unfortunately that was 2006 the year poor Isaac Galvez died in that crash. Then the family went skiing in Switzerland but there was no snow so we went to see the Zurich Six Day too. I just loved the atmosphere at those races.

PEZ: How did you get the ride?
I’ve been trying for a while, guys like Pete Jacques the former GB team track rider and Peter Bauerlein the Derny driver have been trying to get me a ride; Peter had a word with Jimmi Madsen, one of the organisers here in Copenhagen. And Magnus Backstedt, the ex-pro and Paris-Roubaix winner whose daughter, Elynor was riding the ladies’ race also had a word with Jimmi. 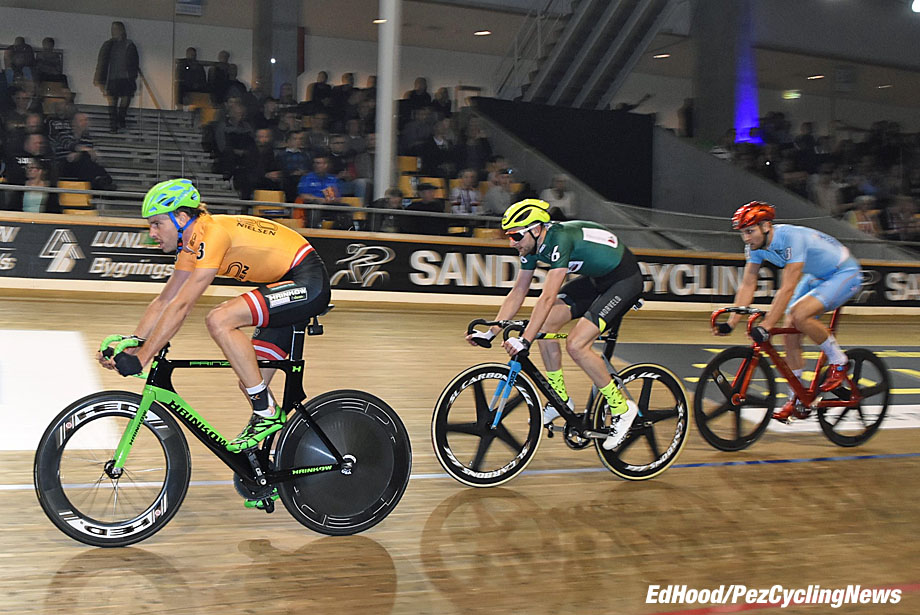 PEZ: What’s been the biggest event you’ve ridden prior to this six day?
I rode a 100 kilometre Madison here in Copenhagen between Christmas and New Year, I partnered Michael Mørkøv’s youngest brother Jakob and we finished ninth. The quality of the field was pretty high, Michael won with Niki Terpstra; Marc Hester and Jesper Mørkøv were riding too.

PEZ: How are you finding the level here?
I’m surprising myself, I’d expected to be on my knees after a couple of days but I’m quite comfortable in the chases. I wasn’t sure how I’d cope with the number of times you have to get up to race each evening – sprints, elimination, Derny, chase, time trial, longest lap, balustrade, big chase. . . But I’m finding that OK, too. I’m not racing at continental level in the UK and the level here is high but I put in a lot of hard training for this race.

PEZ: How about the 51 x 15 gear restriction?
I prefer it, I do a lot of work on lower gears – the fact that the national madison champs were on unrestricted gears wasn’t in my favour. 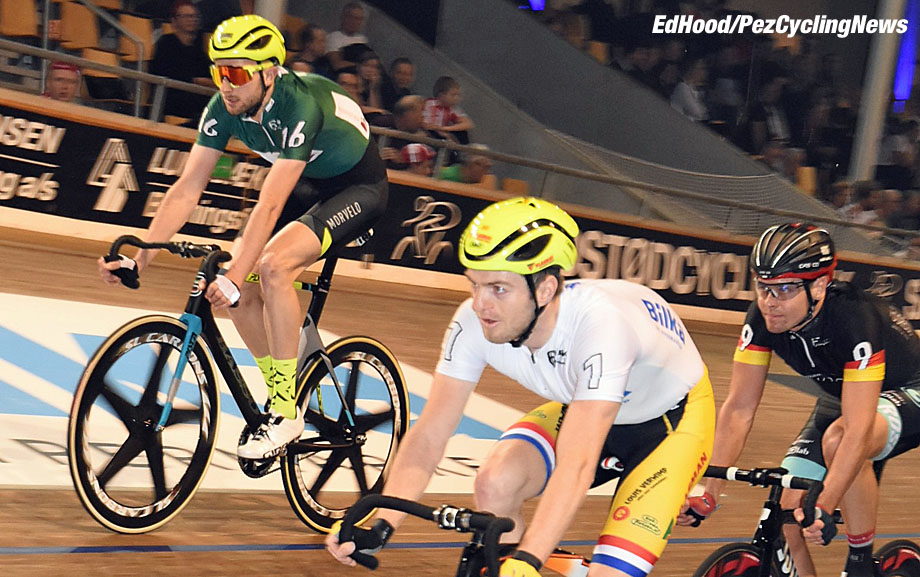 PEZ: How has acceptance with the other riders been?
It’s been fine, I did that big Madison here and I’ve raced against some of the guys at other races so got to know them a little. It takes you a day or two to get into the flow of the race though. You have to race against the guys at your own level in the field and not be trying to chase down Mørkøv/De Ketele!

PEZ: What have you been doing with your down time?
I’ve been tired, it takes your system a while to adapt to racing into the night – so resting a lot and taking in some Netflix! 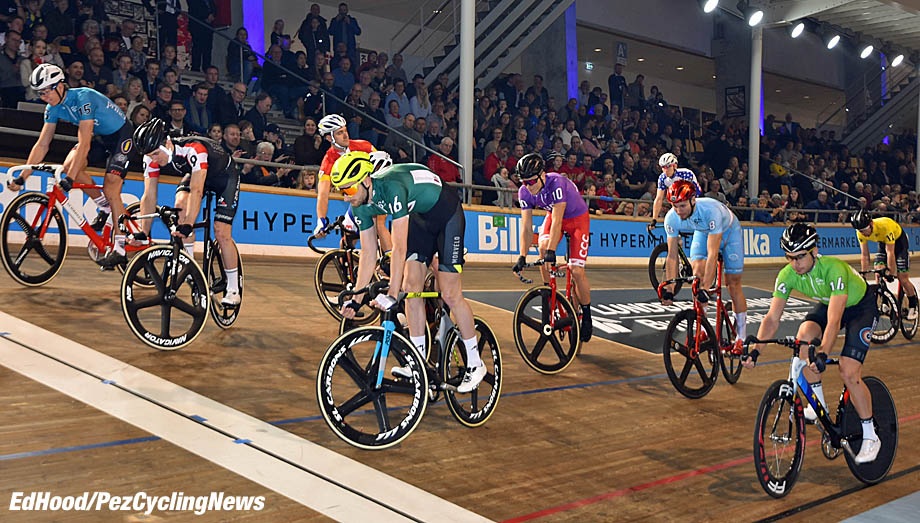 PEZ: Has your team thought about registering as a UCI track team so you can ride World Cups?
Not my team but I’ve spoken to Dan Bigham about the possibility of joining his KGF track team. Their big focus is team pursuit so I’d have to get used to riding the big gears – but he is saying that he’d like the team to ride more bunched races, points and scratch.

PEZ: What’s next on the agenda?
I go to Spain, Andalucía after this finishes to a training camp organised by my coach Tom Kirk of Custom Cycle Coaching for a couple of weeks. 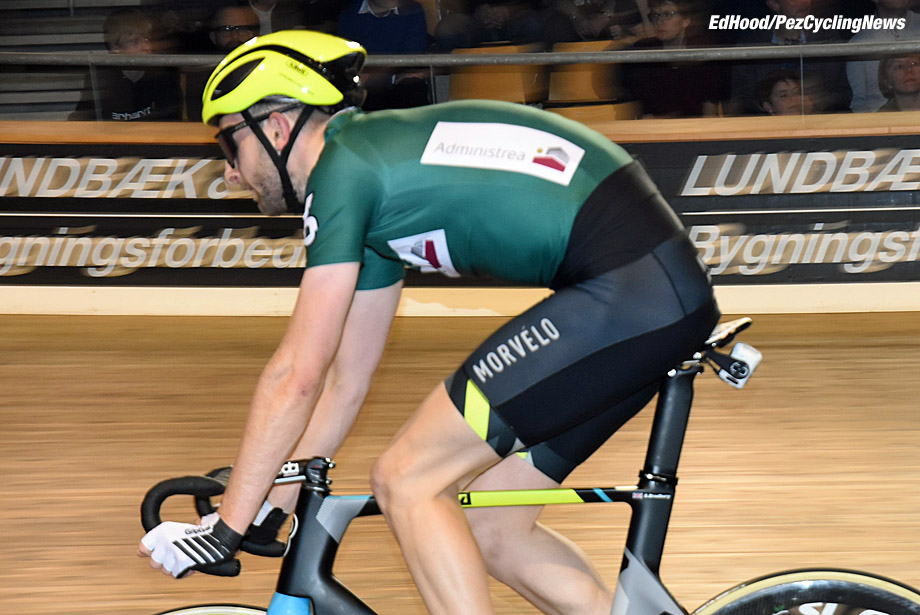 PEZ: Final question, what do you think of the live singing act here?
He’s not Tom Jones, is he?

And at that Stephen saddled up for the 300 laps, 75 kilometre handicap Madison run off at a track record speed in excess of 54 kph – it was 55.3 kph 128 laps in. Parts of those chases may sometimes look processional on TV but the stats don’t lie and this young man is living his dream at high speed. 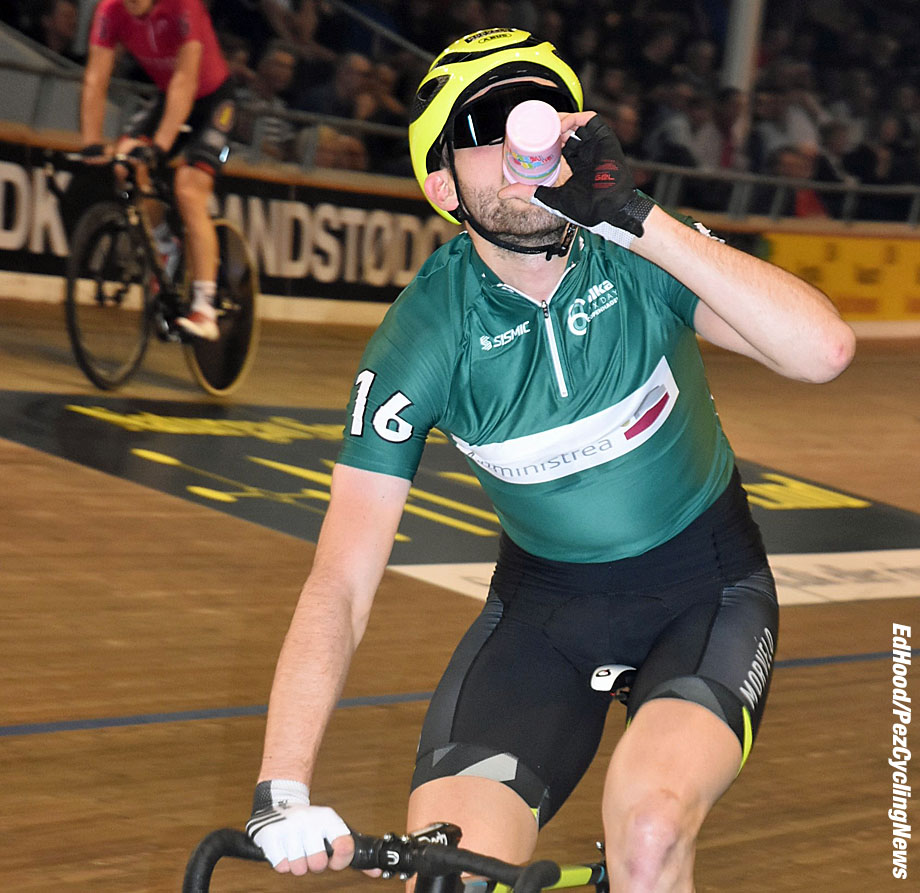