Soigneur Interview: In the 80’s there weren’t many female soigneurs in the pro peloton, but along came the 7-Eleven and everything changed. Trudi Rebsamen was amongst the first, Ed Hood spoke to her about cycling ‘in the day’ and her late partner Steve Tilford. 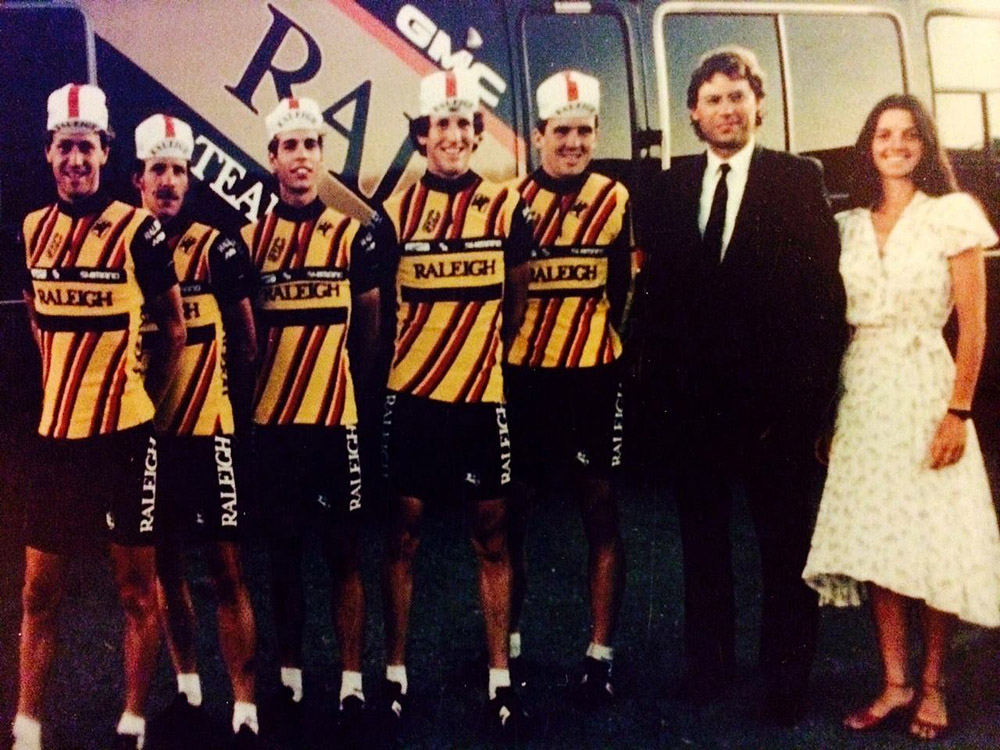 My amigo, Andre Bohren, aka ‘Swiss Tex’ sent me a message the other day; ‘you should speak to Trudi Rebsamen, she was one of a very few female soigneurs in the pro peloton and was also the late Steve Tilford’s partner – a very interesting lady.’ I duly contacted Trudi and she very kindly agreed to grant us an interview:

PEZ: How did you get into cycling, Trudi? – did you race?
Trudi Rebsamen: After earning my B.S. degree from Iowa State University in JLMC/Economics – I got into cycling through the local bike shop – Michael’s Cyclery in Ames, Iowa. Having run track in college – they thought I would be a good candidate for road cycling and especially sprinting. It was a big learning curve, but I persevered and did race quite a bit – however, I seemed to crash or get caught up in a crash too often. 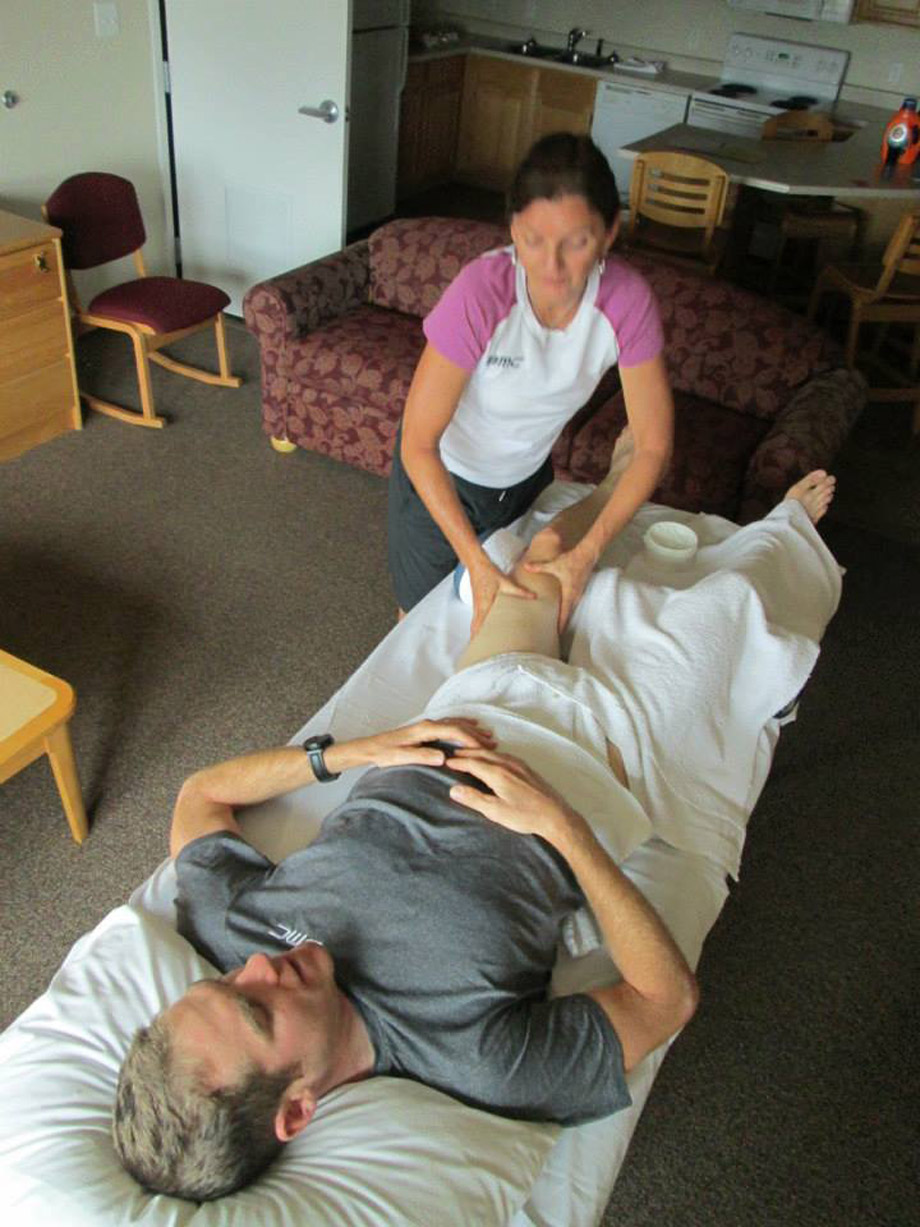 Hard at work with BMC

PEZ: I believe you were involved with the 7-eleven team.
Yes, I worked with the 7-Eleven team for quite a few years and two years of the Motorola sponsorship. My introduction to cycling and teams started with Michael’s Cyclery in Ames, Iowa and the Levi’s/Raleigh team that was run out of the shop by director/owner Michael Fatka. That was how and where I met Steve Tilford – he was one of the sponsored team members. After Levi’s/Raleigh folded – I worked for the team that Steve moved to – Wheaties/Schwinn. From there I was asked to do the Tour de France with 7-Eleven and the following year I moved to Europe – part time to work the season with them. 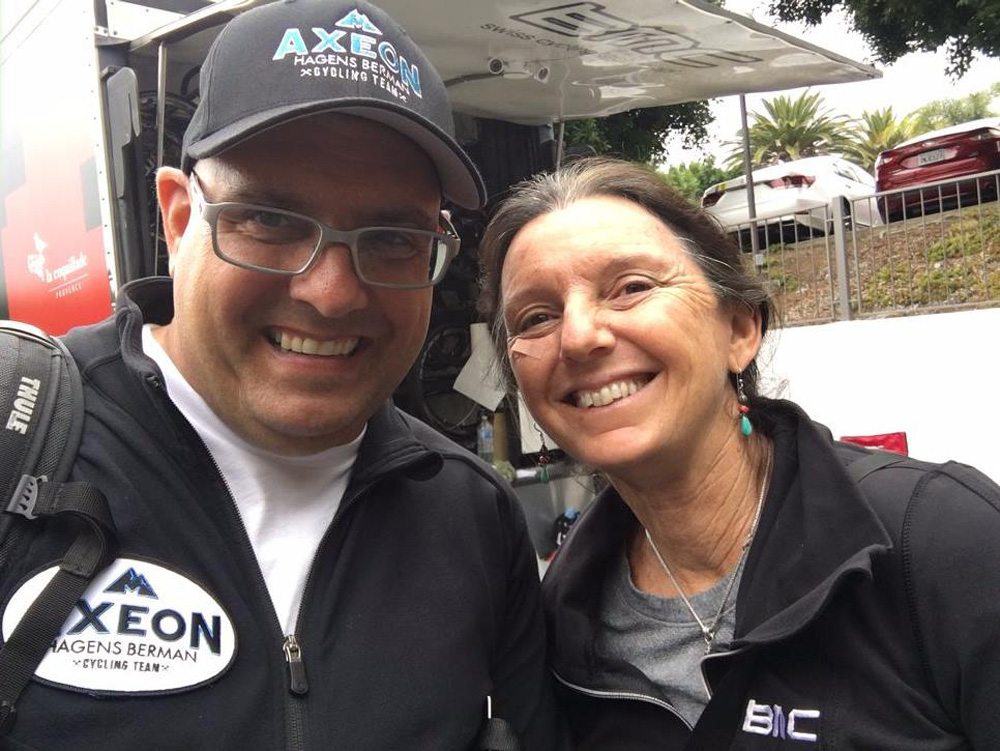 With the late Sean Wiede

PEZ: You were a soigneur with BMC, how did that come about and how long were you with the team?
After leaving Europe and the Motorola team, I worked for several teams and one year at Redlands sat with Gavin Chilcott at the managers’ meeting. He was short one rider for the stage race and I mentioned Steve was with me and was trying to get a ride for the race… so I called Steve who was out training in Redlands at the time. He raced back and rode on the early BMC Team. Gavin mentioned to Steve one morning over coffee that he has a pretty good program going but needed more staff. Steve said I wasn’t doing too much and might be interested. Gavin called me the following week to help out at the Tour of Georgia. That started a second career of pro racing for me. I was with BMC for over eight years. 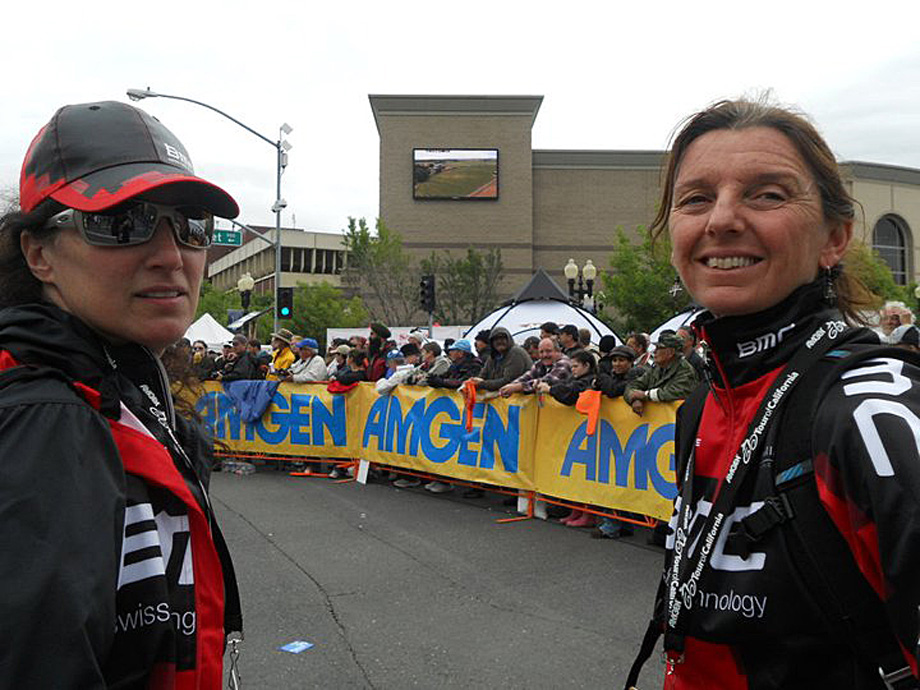 At the Amgen Tour of California

PEZ: How was your acceptance as a woman in the macho world of pro bike racing?
Interesting question. No doubt it’s a male oriented sport and profession. However, I think things are changing. I was the third female soigneur in Europe that I know of – behind Shelley Verses and April Wilburn. All three us from 7-Eleven beginnings. I think the appearance of an American team on the Euro scene brought a newness and fresh set of ideas to the pro bike racing world. 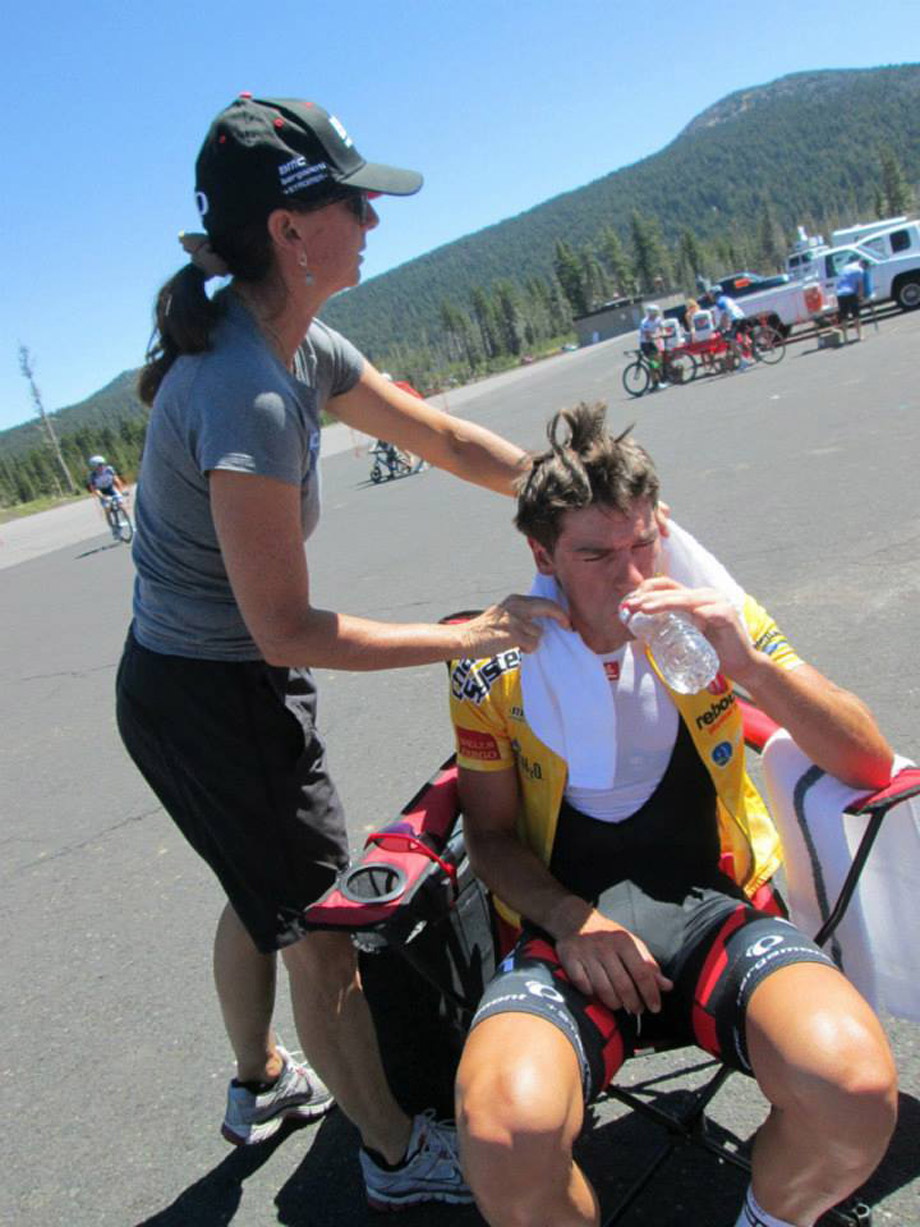 PEZ: What was your favorite aspect of the job?
I think the freedom – I know that might sound curious. But, you had a job to do – you could do it in any order or time frame – as long as it got done! I also think the travel – to wake up after a short night’s sleep, tired and still groggy – to a view of the Swiss Alps – breathtakingly amazing! 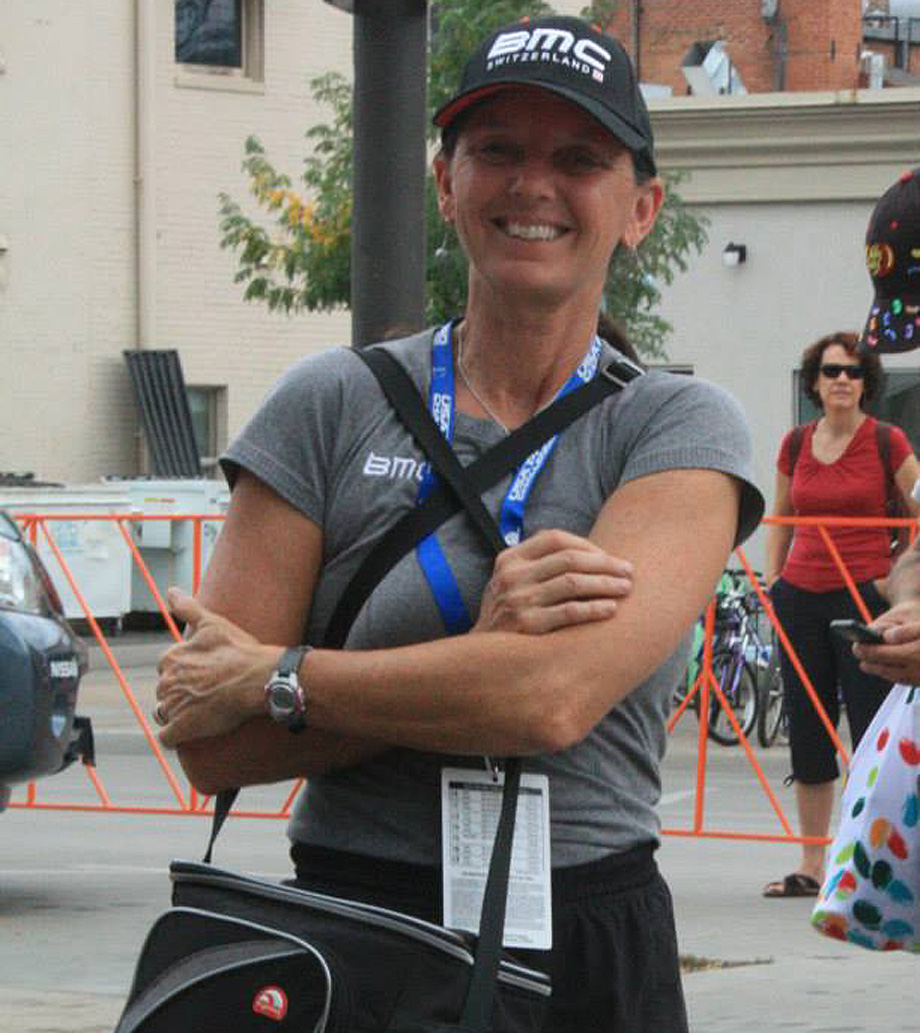 Waiting for the finish

PEZ: And least favorite?
I think it would have to be the time away from home – Steve, our dogs and cats, family and loved ones. It was always hard to leave. 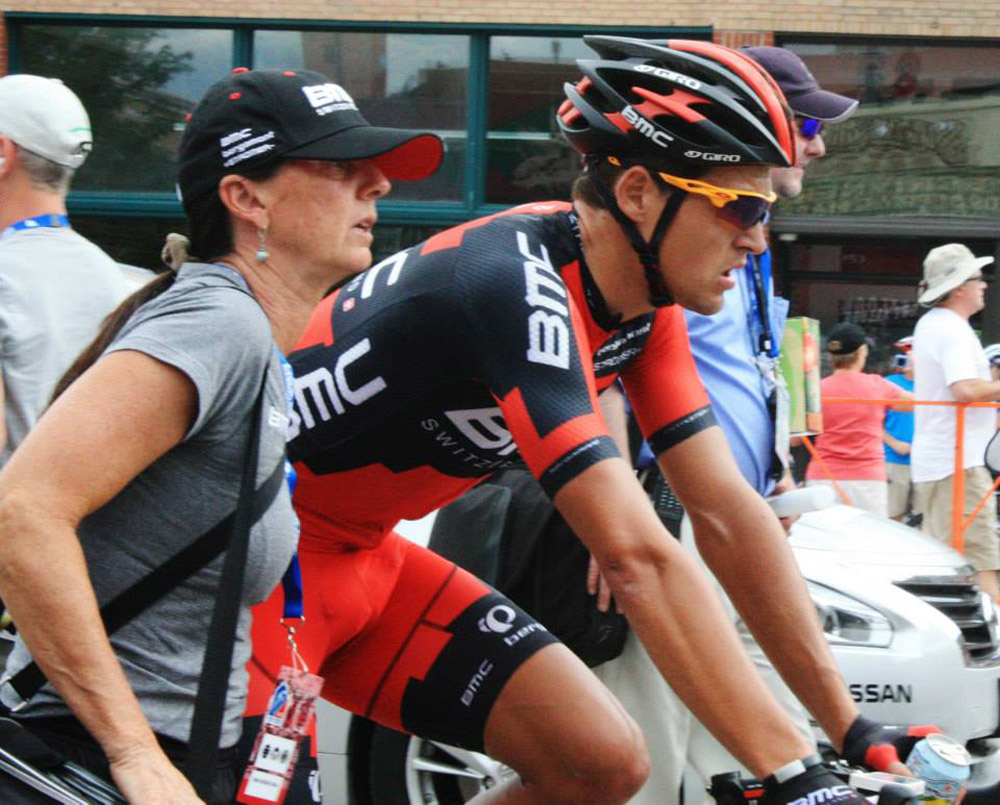 PEZ: What was the biggest drama you had to handle with BMC?
Not really too much drama – perhaps one of the most frightening however, was when Mathias Frank crashed in the prologue/first stage of the Tour de France in Holland. He never arrived at the finish line – and a French police office/motorcycle driver with the Tour de France came to the finish line to inform me – a mixture of languages and gestures to get a handle on just where Mathias was and where they had taking him. And, of course, not to discount the horrible crash Taylor Phinney had at US Nationals – the helpless feeling and moments of unknowing. When you don’t see your rider, that’s the worst. 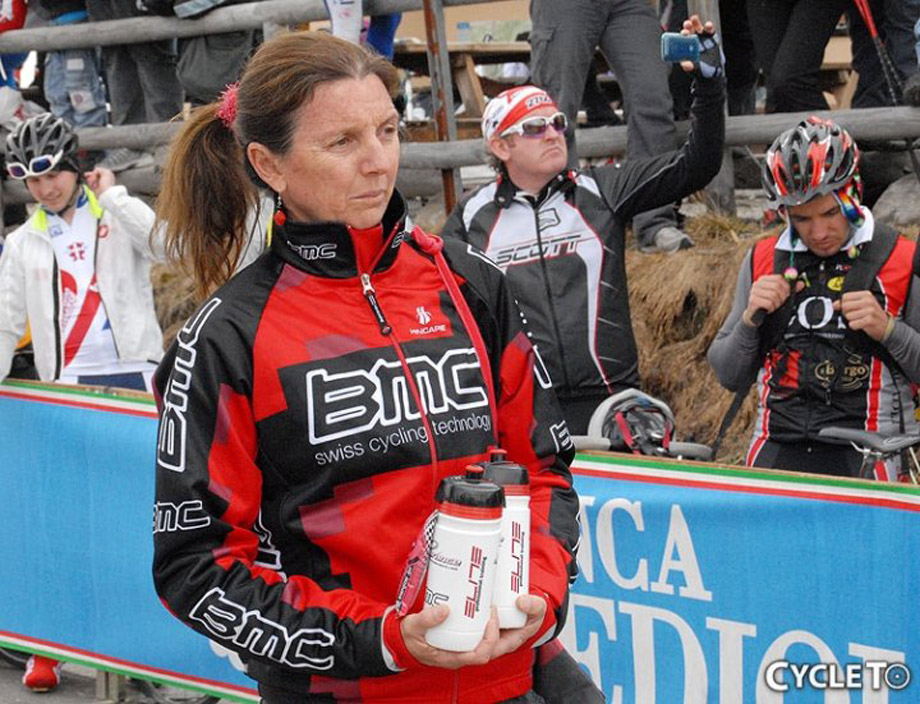 PEZ: What was your favorite race?
The Tour de France

PEZ: What did you do when the BMC Team came to an end?
I returned to the US in 2017 – before the BMC Team ended – when Steve was killed. In the fall of 2017 I moved to Cable, Wisconsin. I bought a small house in the small town and started a pie shop, Tilly’s Pies, LLC. Steve loved pie and wrote about making pie and eating pie on his blog. We spent a lot of time up North – riding trails, gravel and road, cross country skiing and racing the Chequamegon Fat Tire and American Birkebeiner. We made a lot of good friends and it was our favorite retreat. And, Bromont, our first English Setter – loved it! 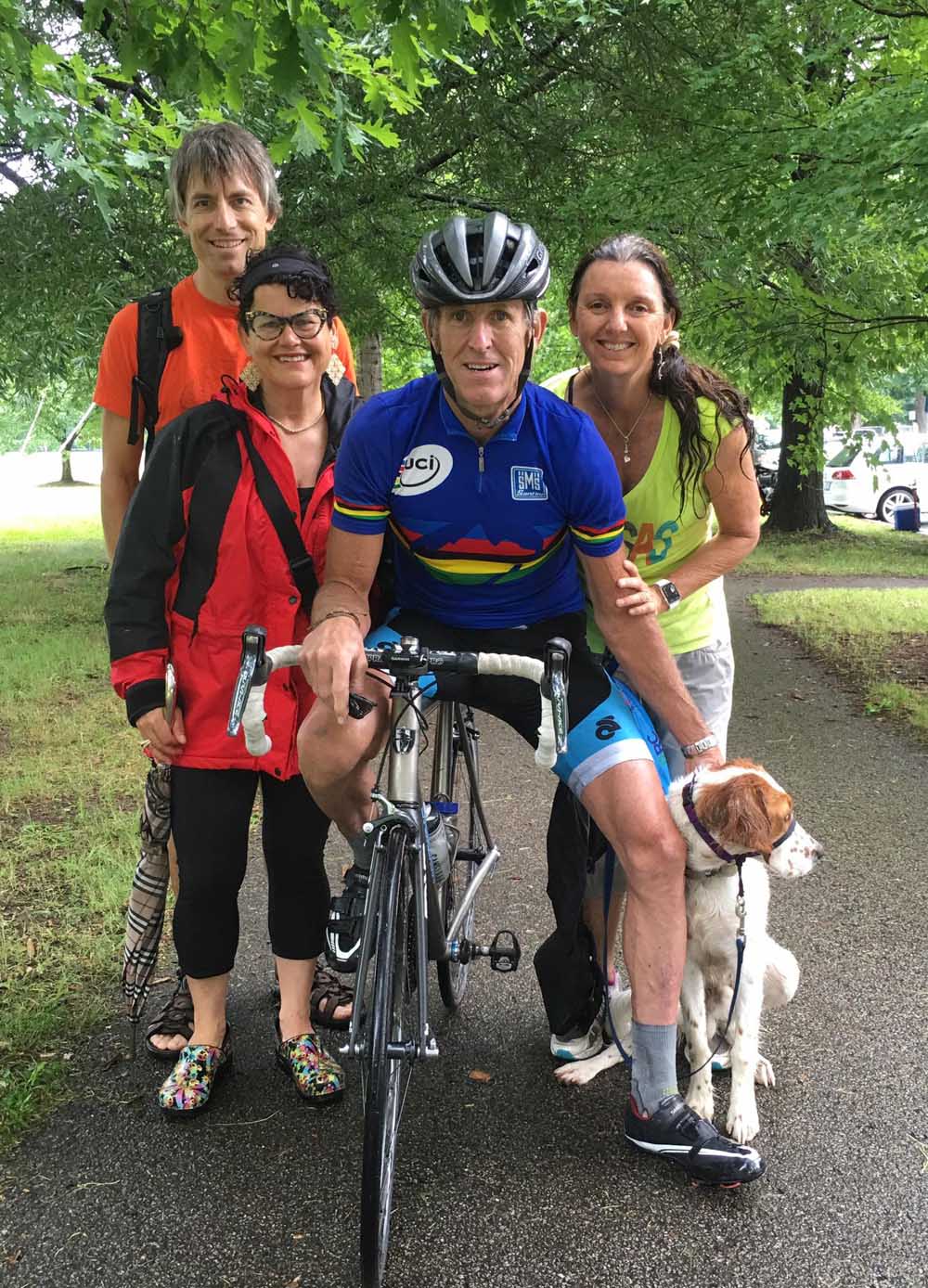 PEZ: Life with Steve must never have been dull.
Dull, no I could never describe our life as dull. We had an amazing life together. He was always on the go – traveling, racing, riding, building, creating, xc skiing… and taking me with him. He had an incredible love of life and we developed a world of wonderful friends. 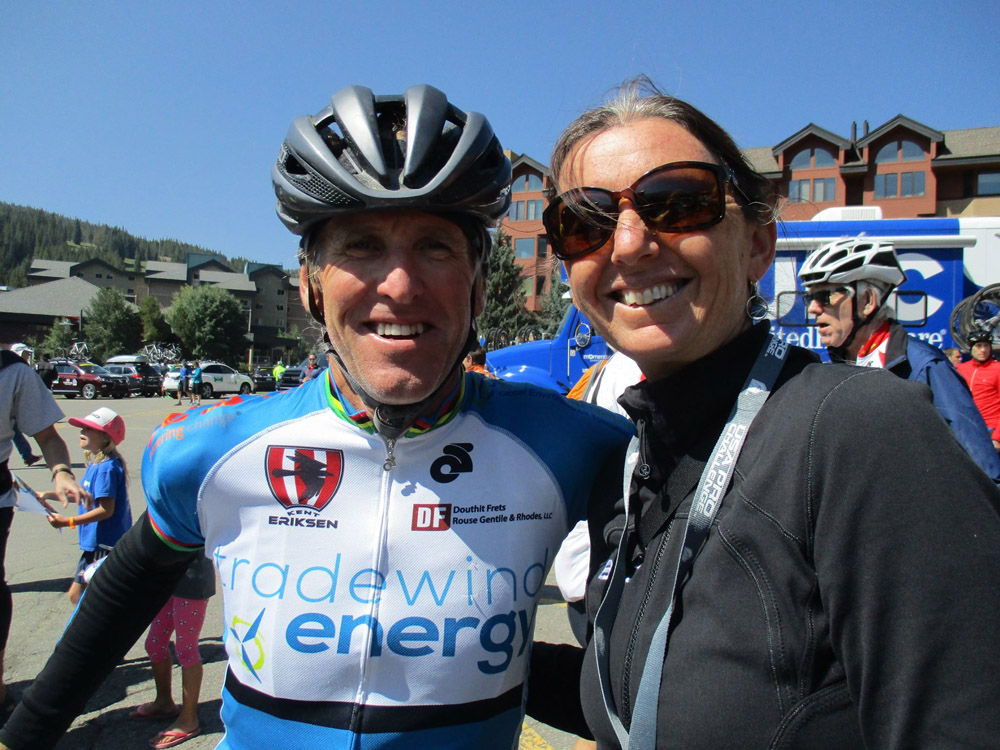 PEZ: I believe that you were in Europe when Steve died, that must have been terrible for you?
Yes, that was terrible. A call you never want to get. A memory that never leaves the front of my mind, I replay the conversations and calls over and over in my head and try to find an answer. There is none. The BMC Team was very kind – they got me out of central Spain – to Belgium and back to the US where I was surrounded by family and friends. It’s all he little moments that I remember – and feel the most sad about. Moments and memories that only the two of us shared and experienced. Now, I don’t have Steve to remember them with me. 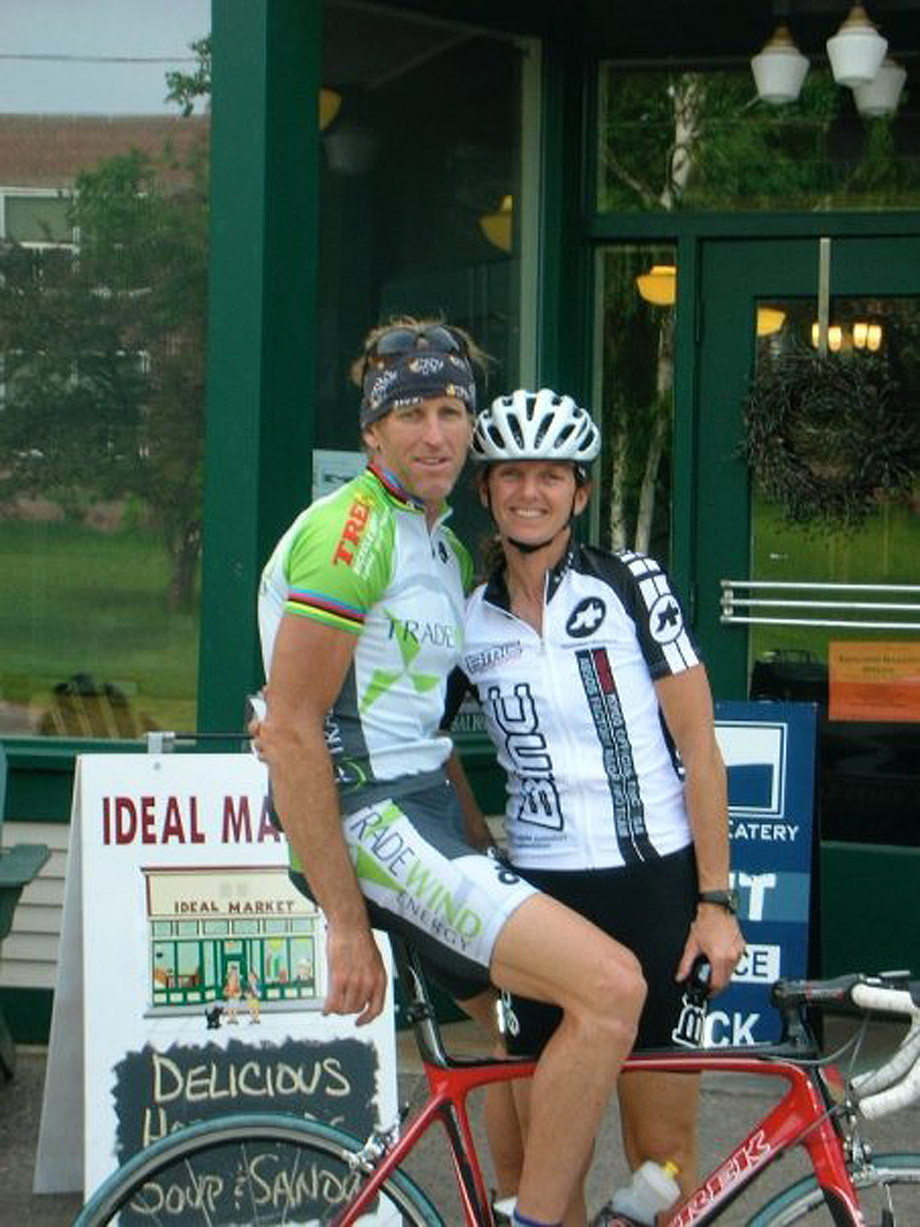 PEZ: Tell us about the Steve Tilford Foundation, whose idea was it, what’s your involvement and what are the objectives?
After Steve was killed, I called Derek Bouchard-Hall, CEO of USA Cycling, at the time, and told him my wishes to establish the Steve Tilford Memorial Fund at USA Cycling. The goals of the fund are to promote healthy drug-free cycling programs geared to youth development. USA Cycling has done an amazing job promoting and developing this program – especially with two years of Covid. #IRIDECLEAN powered by the Steve Tilford Fund, educated by USADA was launched at the 2021 US Cyclo-cross Nationals. After that initiative, I contacted Steve’s long-time friend and sponsor, Matt Gilhousen, Lawrence, Kansas. I wanted a lasting legacy to both honor and share Steve’s incredible passion for life and cycling. Catherine Walberg, Topeka, Kansas joined us and we designed and created the Steve Tilford Foundation (STF). 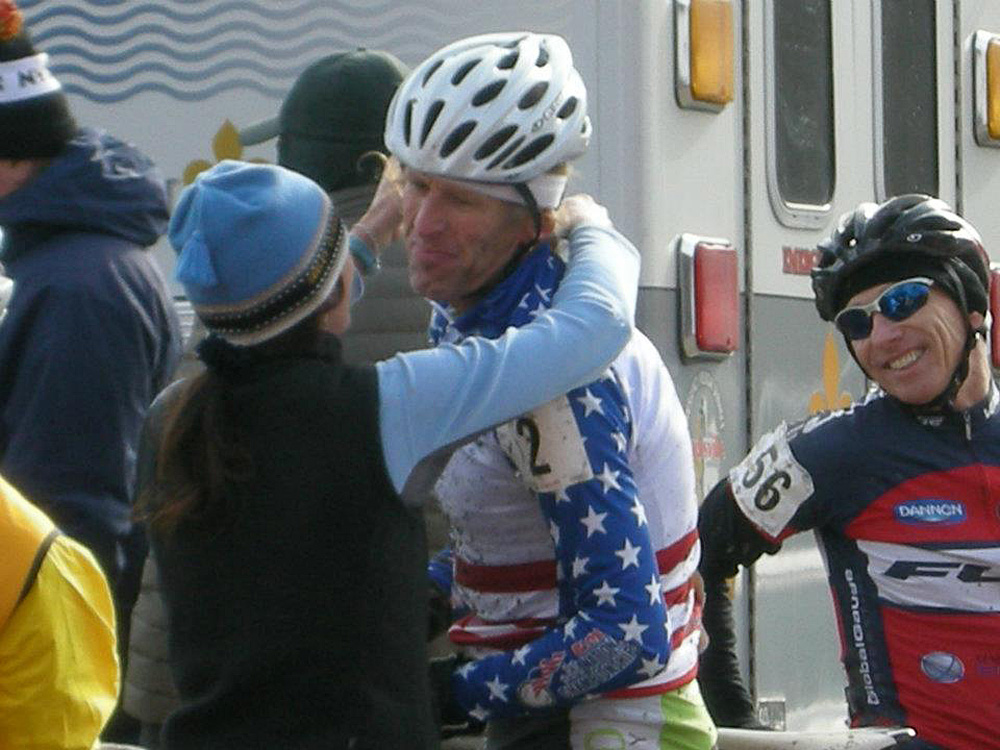 The mission of the STF is to help young people find and chase their passion through the sport of cycling by promoting education, mentorship, and access to quality cycling opportunities. In just its first year, the STF worked with the Lawrence School District and Douglas CO. Health Department to establish Bike Safe Routes to School, Bike to School Day, and Healthy Built Environment programs. In 2021, the STF received the Culture of Health Award from the Livewell and Douglas Co. Health Department. They also contributed to the funding and mentorship of the Donderdag! Youth Cyclocross program and dedicated cyclocross park in Shawnee, KS. Steve was, above all, a bike racer, but his influence reached far beyond racing and what better way to spread and share this passion, than to partner with a racing team – thus the Steve Tilford Foundation Racing Team. The STF Racing Team of Raylyn Nuss, Stephen Hyde and Joseph Schmalz, are not only exceptional, talented, thoughtful, winning athletes, but STF ambassadors, racing for a purpose: promoting and mentoring young riders throughout the US while competing at the highest level in our sport. And, dear friends. I’m proud and humbled to be part of the Steve Tilford Foundation. To hear his name announced at US Cyclo-cross Nationals as the athletes crossed the finish line – that brought me joy and a tear. 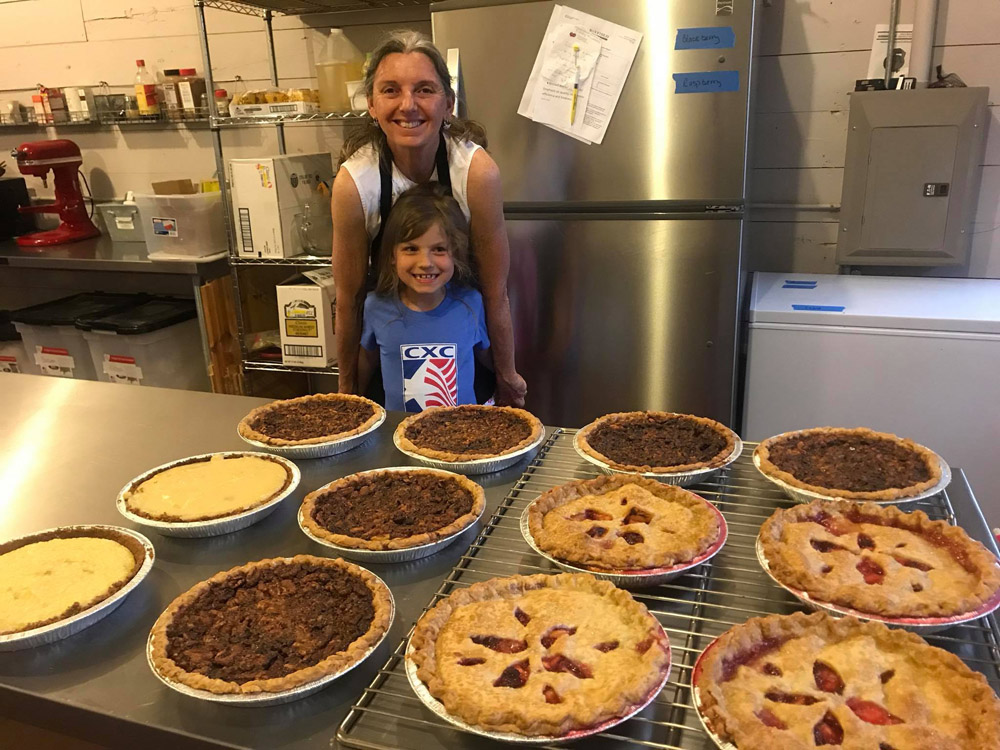 PEZ: How is life without Steve – what keeps you going?
It’s hard, it’s very hard. He was and to me still is, larger than life. The stories customers at Tilly’s Pies or at Nationals or on the street, on the trails – share of meeting Steve and the conversations he had with them. It keeps me going. Baking pies, riding my bike, walking our dogs, Tucker and Tintin. My family and friends. And, his smile that I see in my mind everyday. 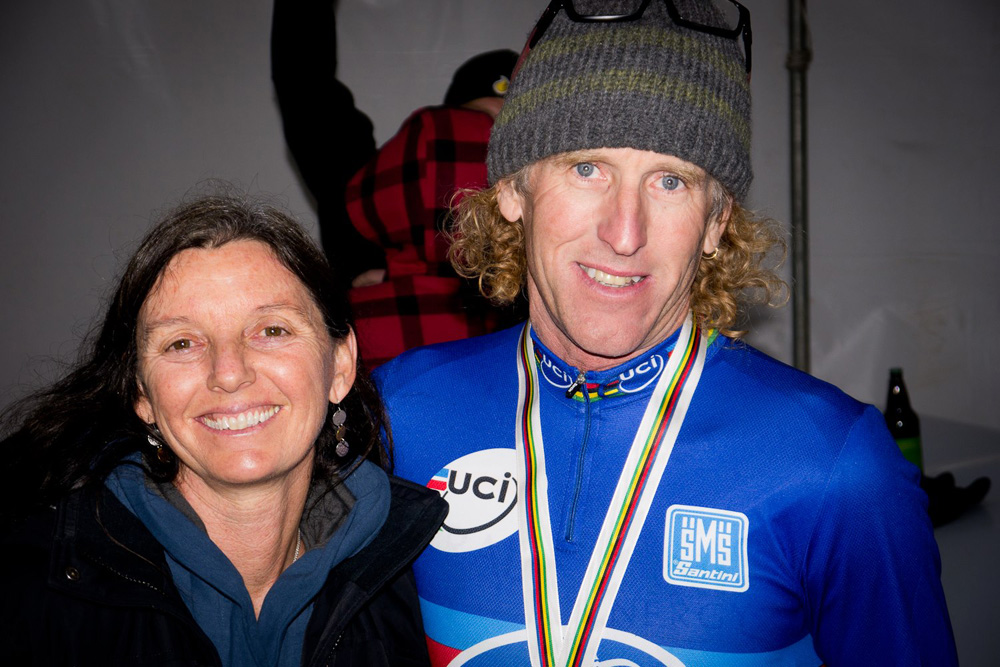 # Thanks to all the photographers. #