70’s Rider Interview: Wilfried Wesemael was out of the tough Belgian school of bike riders who worked had for his team leaders, with some success of his own thrown in. Ed Hood caught up with the man from Aalst to chew over old times. 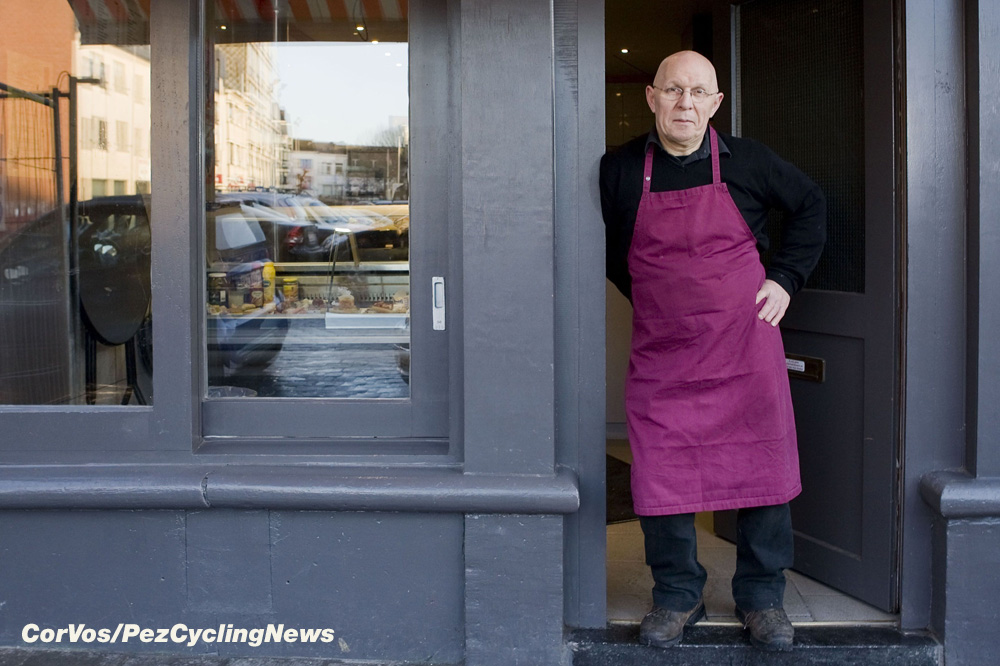 The 70’s and early 80’s – great cars, great music, great bike riders and the Ti Raleigh team. A man who was an integral part of that mighty formation for four years was Wilfried Wesemael.

The Belgian from Aalst – famous for the post-Tour criterium – had a good amateur career, rode in the 1972 Munich Olympics then was a professional for a decade, riding for Hertekamp, various incarnations of ‘Baron’ Jean de Gribaldy’s teams, Frisol, the mighty Raleigh team and Safir during a solid professional career.

His biggest successes were Kuurne-Brussels-Kuurne in 1974, a stage in the Vuelta in 1975 and the overall in the Tour of Switzerland in 1979. However, he was never really the same ride again after a horror crash on Stage Three of the 1979 Tour de France – one of the toughest days the Tour has ever seen with a dozen riders abandoning on a savage day in the Pyrenees. Thanks to the good offices of Scotsman, Laurence Morgan who keeps the Ti Raleigh flame burning with his ‘Ti Raleigh Vintage Cycling Club GB’ we got the chance to put some questions to Wilfried. 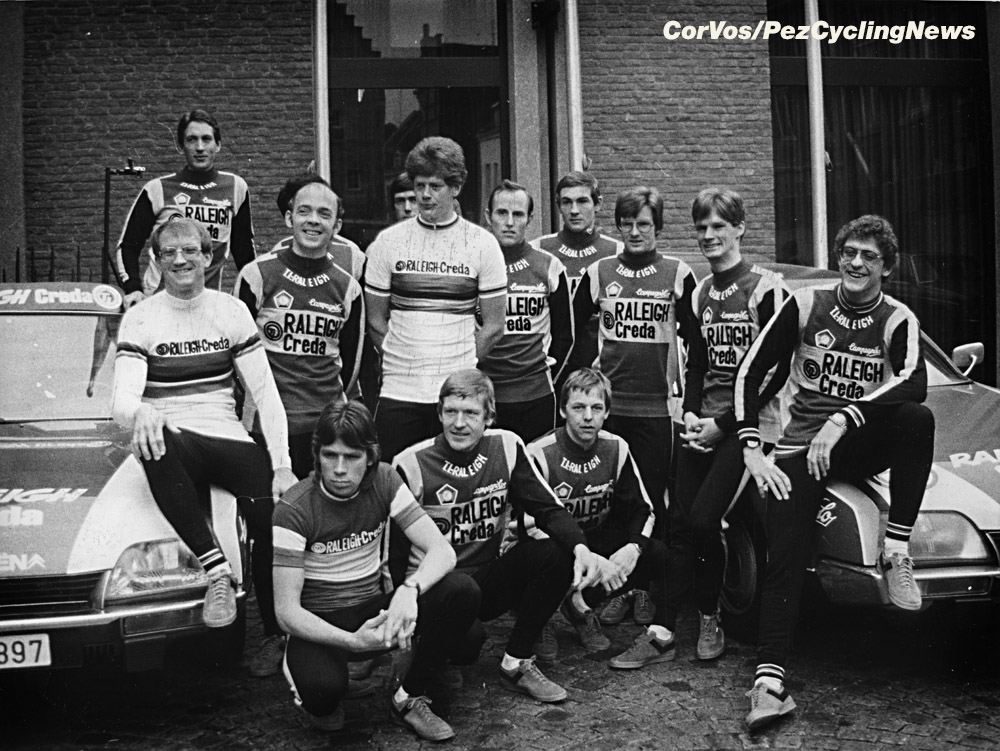 PEZ: You were a very good track rider as an amateur with national titles to your name – did you ever consider a track career?
Wilfried Wesemael: Yes, I was a good track rider as amateur but as pro it was not easy to break into the circuit for the winter six day races where the money was to be made, so I chose to go for the road.

PEZ: Which team did you turn pro with and how did you get the ride?
I turned pro with the Hertekamp team in September ‘73 after a good friend recommended me to the team management. Hertekamp, the sponsor is a famous Belgian genever – that’s a juniper gin which is popular here in Belgium. 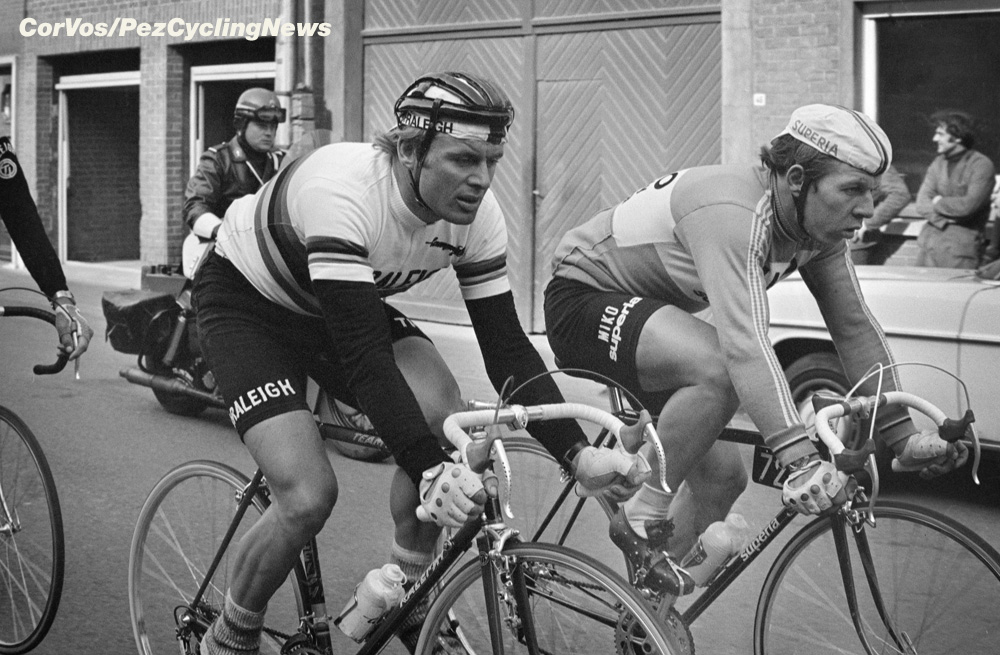 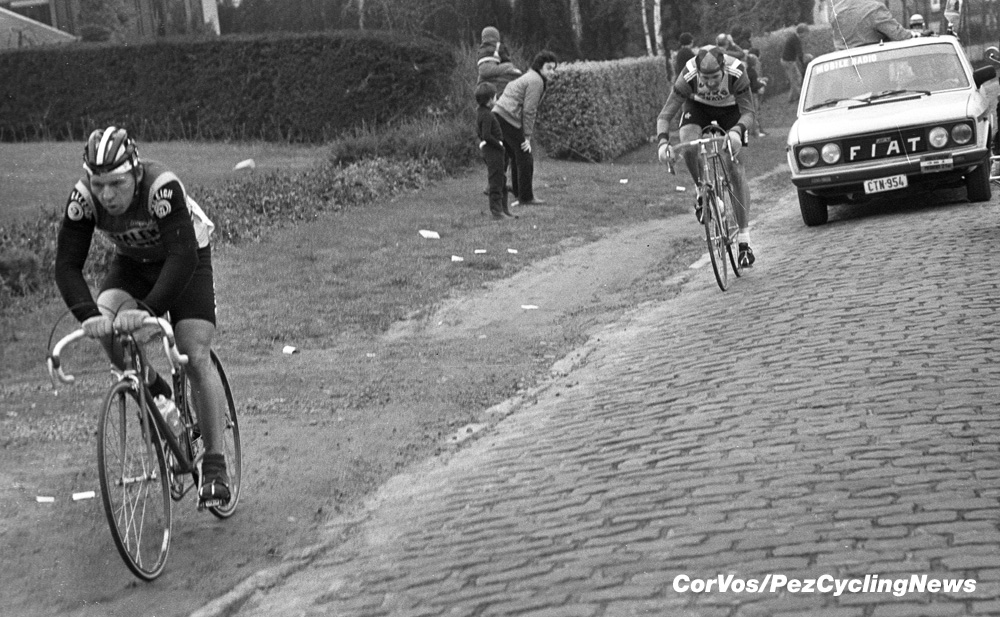 PEZ: You won Kuurne-Brussels-Kuurne in ’74 – a big result for a young pro.
My first pro victory was Kuurne Brussels Kuurne, yes. That was a great day; to beat the sprinters for the victory – there were some fast guys there – Cyrille Guimard, Walter Planckaert, Freddy Maertens. . . Nobody knew my name before that day but that ride gave me a spot on the team for Paris Nice two Days later. 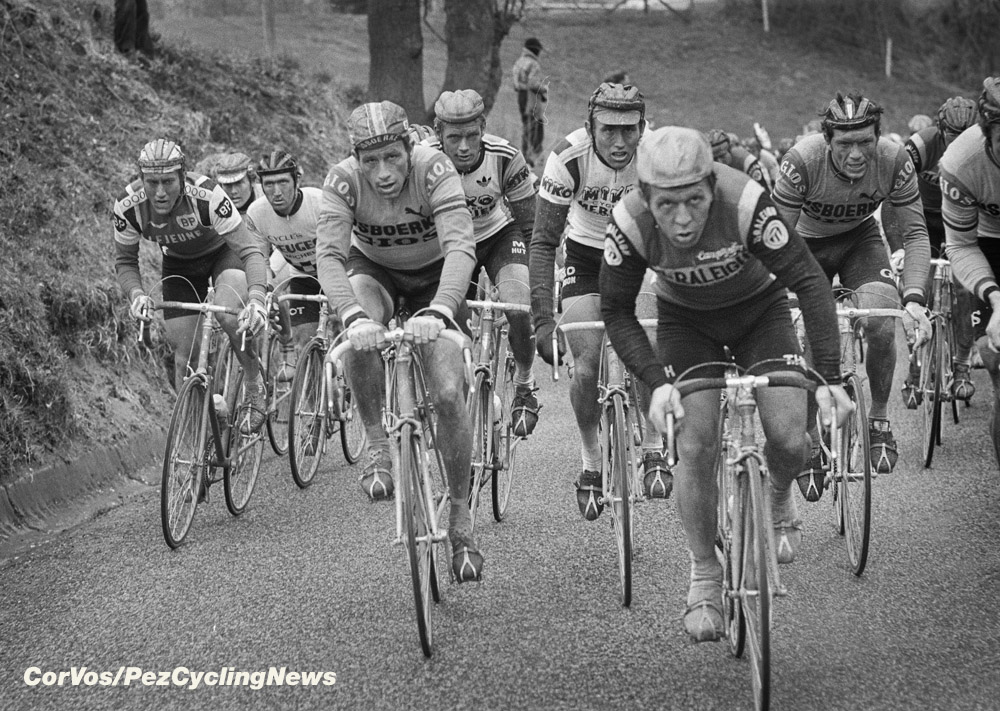 PEZ: You rode the Tour de France in ’74.
Yes, that year I also got a place in our squad for the Tour de France, it was all so new for me – it was the first time I’d even seen a mountain! However, I finished the race with four top 10 stage placings, so it wasn’t a bad debut. 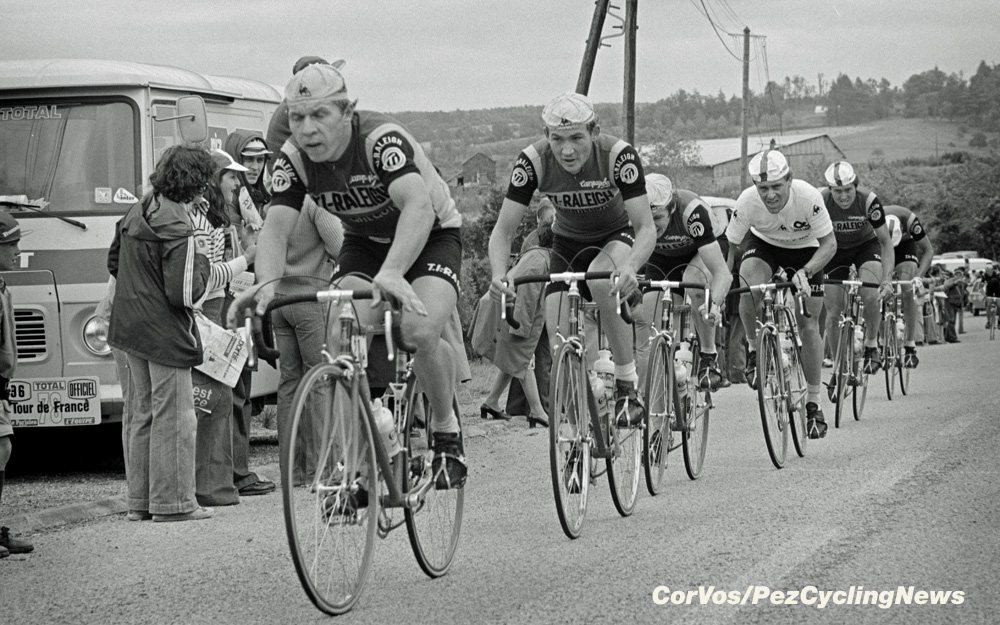 PEZ: In ’75 you won a Vuelta stage, another big result.
Yes, ‘75 saw me take victory in the Vuelta on Stage One; it was in sprint, a great result but because Roger Swerts beat me by 21 seconds in the prologue, I didn’t take the leader’s jersey, he held on to it. I was also second to Marino Basso on Stage 10 and had seven other top 10 stage placings in that Vuelta, which was held in the spring back then. 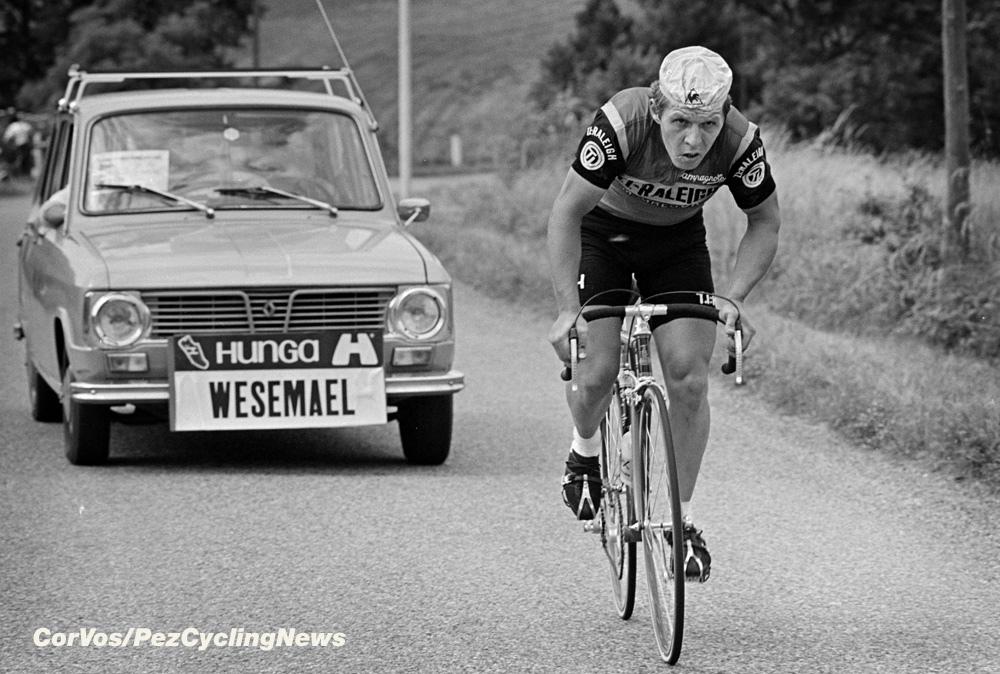 PEZ: Season ’76 looked quiet for you?
I was top 10 in Het Volk, seventh in Paris-Nice and 11th in Milan-Sanremo; then I crashed and broke my collar bone – that was my season finished albeit I rode a few races late season, like GP Fourmies. 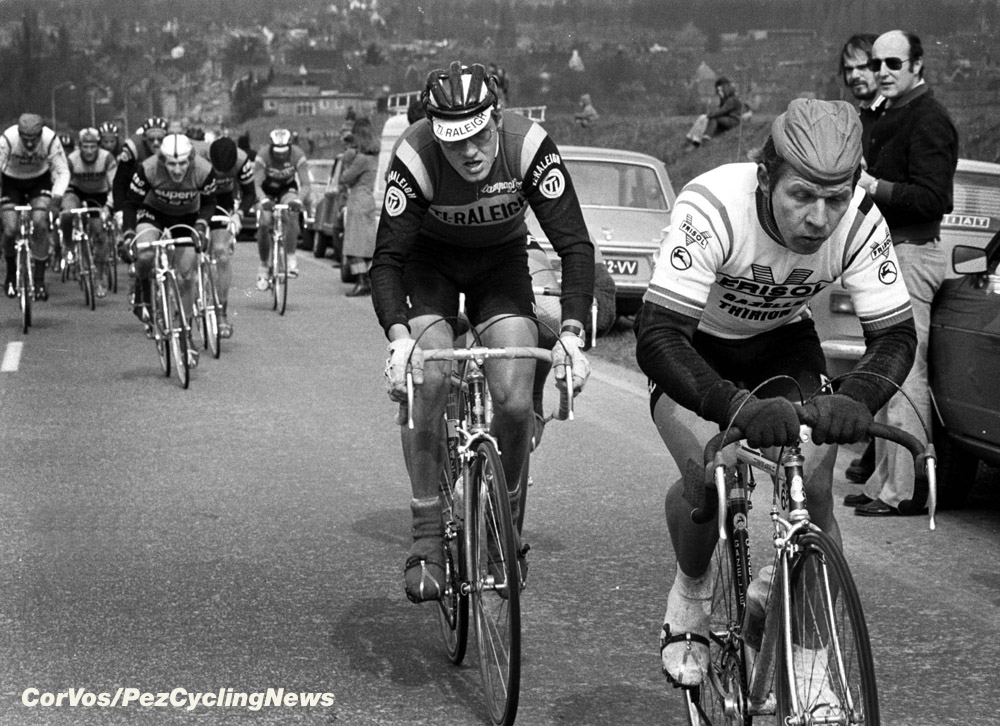 PEZ: The Frisol team in ’77.
Yes, ‘77 in the Frisol team with the likes of Don Allan, Fedor den Hertog and Jan Raas was a good experience. I took second place overall in the Tour Mediterranean and later third place in Milan-Sanremo with Jan Raas the victor, that was such a great day for the team with two of us on the podium. And it was a new start for me. 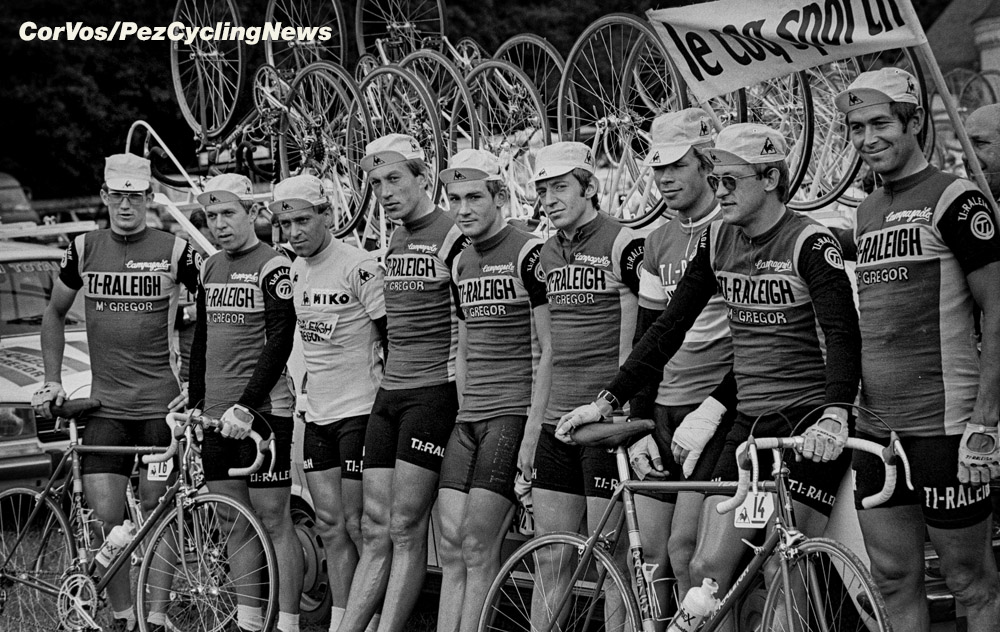 PEZ: The mighty Raleigh team for ’78.
We had good bikes, good support; it was a very professional, well organised team.

PEZ: You got the year off to a great start with victory in the GP of Cannes?
That was a year of great performances for me and the team. Victory in Cannes was satisfying but I did much good work as a domestique for the team and Jan Raas in particular, that year. We scored a lot of victories that year and in the team time trials we were the best – a very strong team.

PEZ: Season ’79 saw your biggest win, the Tour de Suisse.
Yes, that was my biggest victory; but also a victory of the team – although I was in great form that year. The mountains where no problem to me and against the watch; I was good with sixth and third places in the race’s two time trails behind my team mate, the late Gerrie Knetemann who won them both. 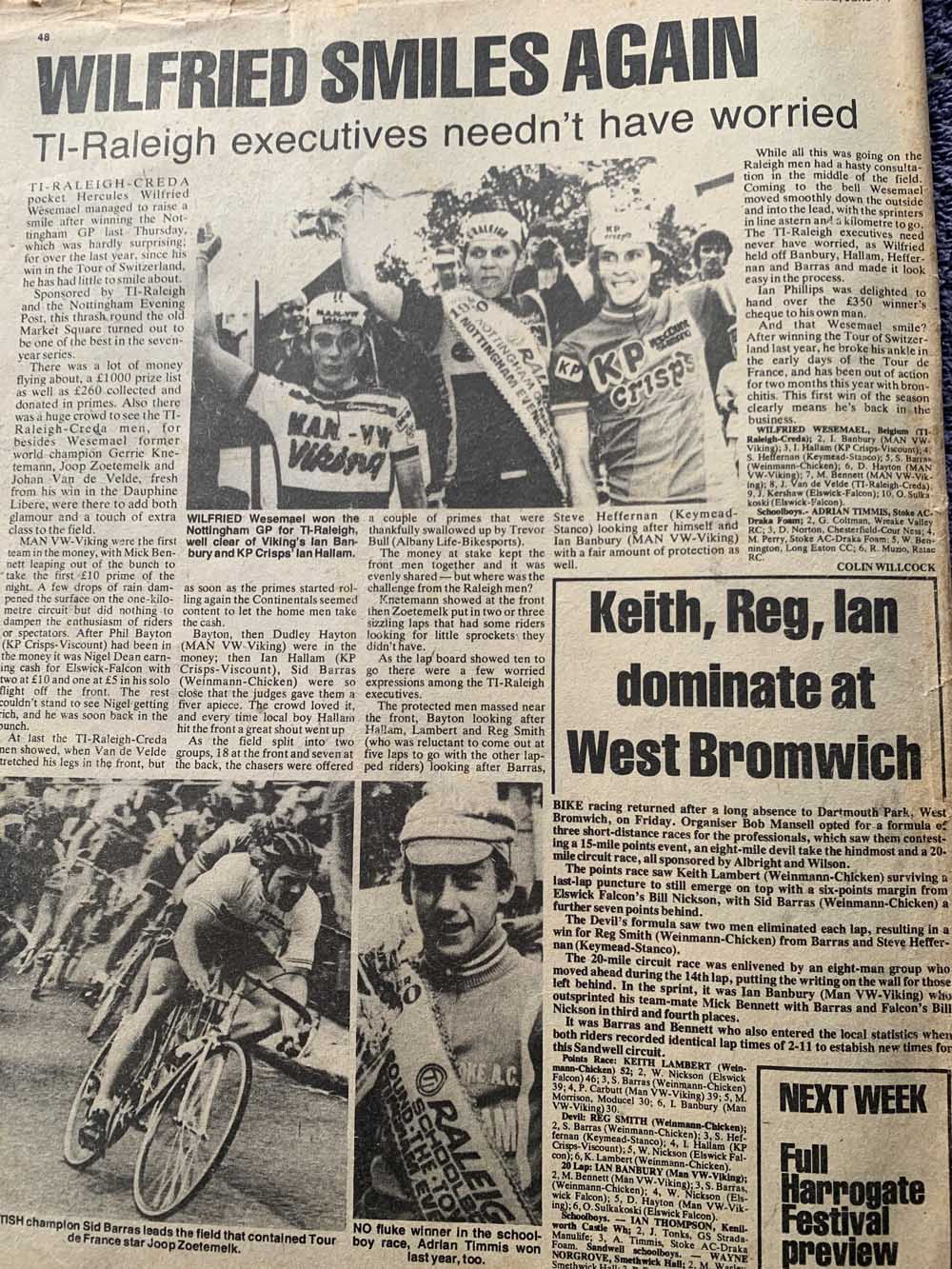 PEZ: You won a criterium in Nottingham, England in 1980; Raleigh’s home town – that must have been a nice victory.
Yes, it was satisfying, I’d had bronchitis earlier that year so it was good to come back and win on the sponsor’s doorstep. But I was in a big crash where I sustained a bad back injury and broke my ankle in the Tour de France in 1979 on Stage Three, right after my Suisse win. I had punctured and was chasing to get back to the peloton, on a descent in the mist I went over the edge and fell five metres. I was never really the same again after that. 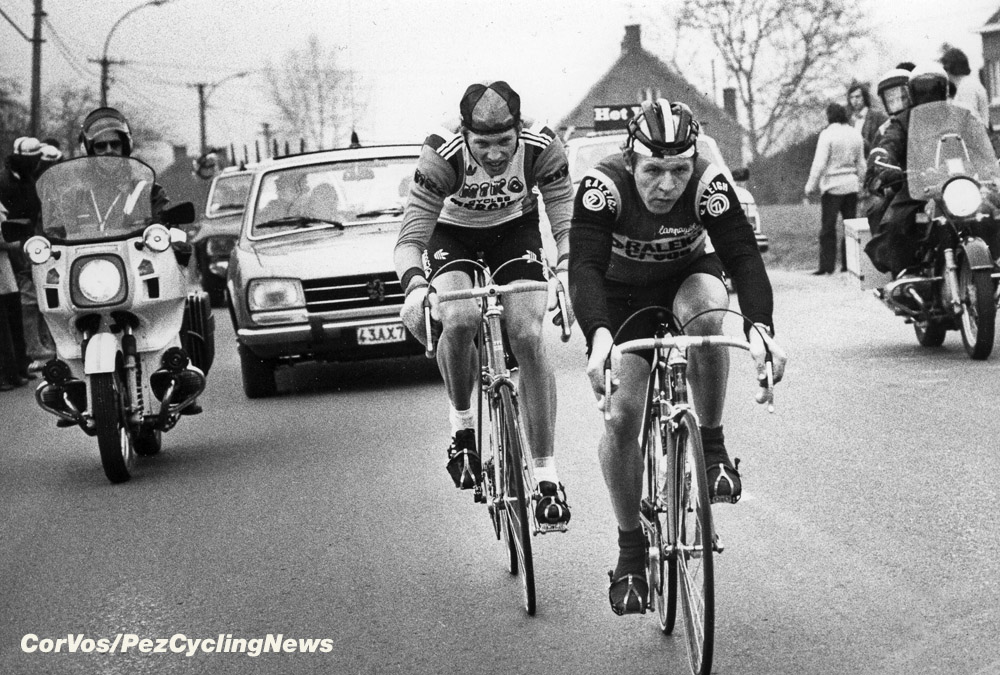 PEZ: Your last year was with Safir in 1982. . .
Yes, but that wasn’t a happy experience and I stopped racing. I opened a snack bar which I ran right up until last year when Covid stopped everything. But when I look back on my professional cycling career, I have no regrets.

# With thanks to Wilfried and Laurence. # 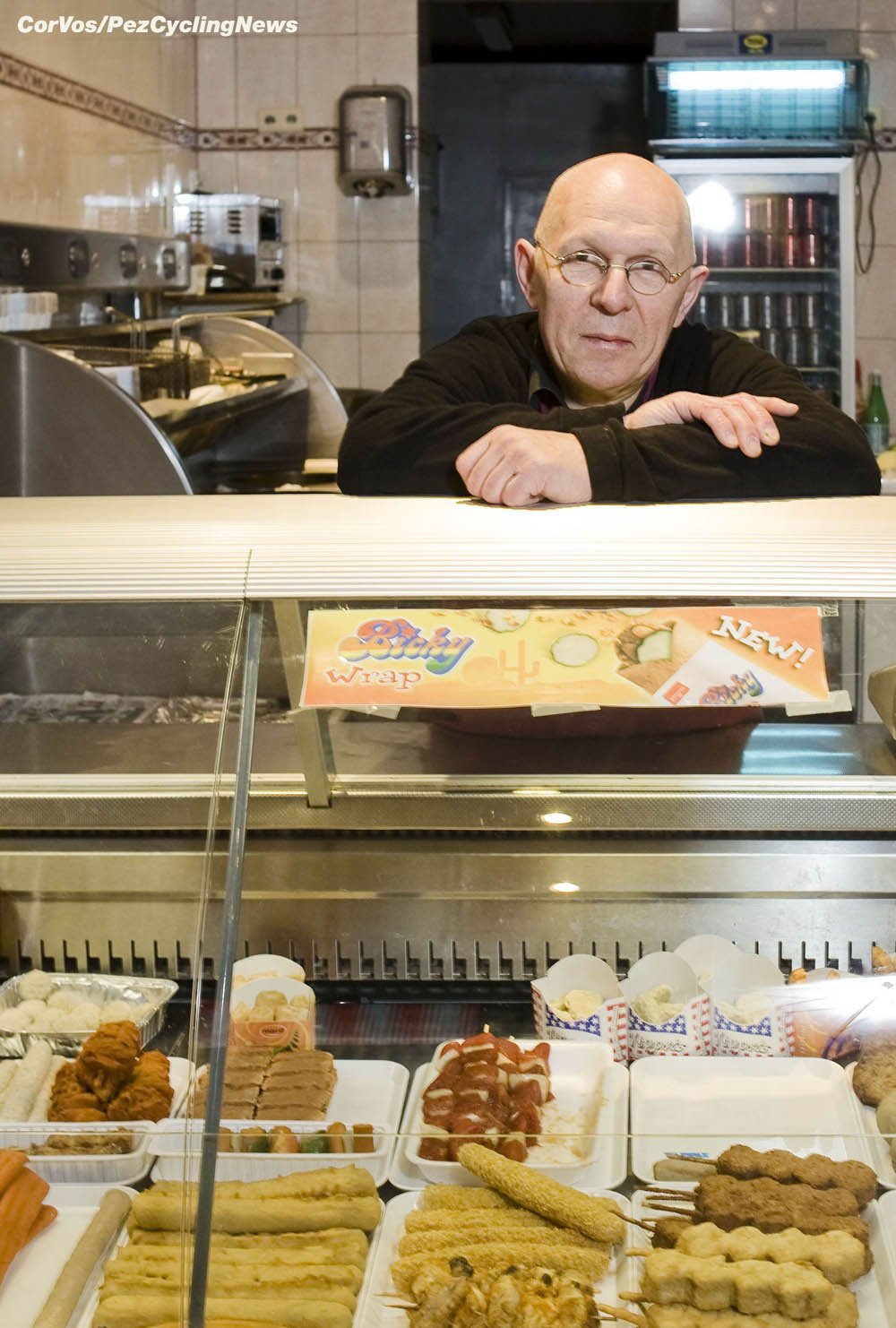