A Day with Andrea Peron

We’d kill for a resume’ like this…Italian national TT champ…Olympic silver medalist…teammate of both Lance and Basso…but after 14 years as a pro, CSC’s Andrea Peron is going to hang up his Cervelo. He’s starting his retirement in style with a NorCal day to remember… and PEZ-man Bob Cullinan got to tag along.

Long time PEZ-Fans will know Andrea well from his many journals and interviews with us over the past few years too.

So, what the heck is he doing in Marin County, CA? And how come I got to be his wingman for a day? Well, Andrea and I have a mutual friend…Ann Asiano is a local lawyer, and she’s also the owner of Umbrella Girls (umbrellagirls.com). You’ve probably seen her girls in action (and distraction), holding umbrellas over racers to shade them from the starting line sun, and generally looking hot at cycling and motorsports events.

When Peron announced that the Giro di Lombardia would be his last race, Ann wanted to bring him out here to California for a big retirement bash. So, he shipped his CSC team bike to Marin County, and since he’d never ridden before in this part of the world, I volunteered to take him out for a spin.

• I knew I’d need help guiding Andrea around the area, so I asked Emily Zell, of the women’s elite Proman/Paradigm team, to join us. 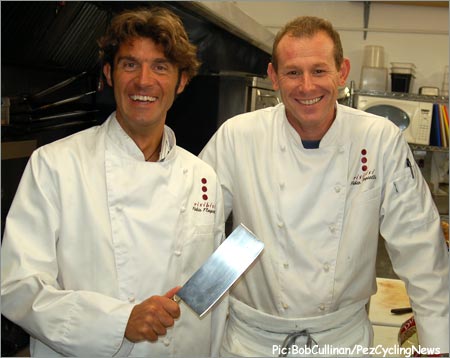 • The other guide on the ride… Italian-born chef Fabio Flagiello. Fabio agreed to host the dinner bash for Andrea at Risibisi, his restaurant in Petaluma, CA (risibisirestaurant.com). So, before the big feast, we had to burn off a few calories. 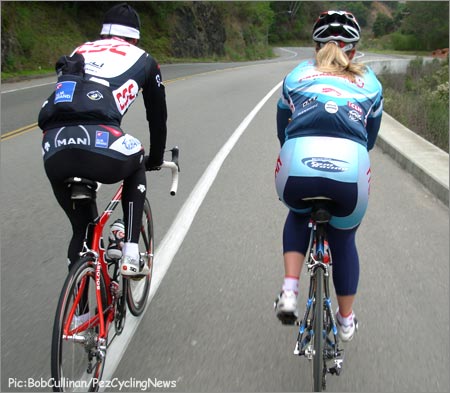 • Heading up the hills in Marin, we were huffin’ and puffin’…but Peron was cracking jokes. At one point, he said to Emily, “Move your ass…I can’t see the peloton!” But I’m told this line only works for pros, ex-pros, and Italians…

• The bad news…we were about 10 miles out on the ride when it started to rain. Big-time rain! So we found a local coffee shop to warm up, and listen to Andrea tell us stories of his days on the Motorola, Fassa Bortolo and CSC teams. Here, he’s telling us that he rides this close to his max heart rate when he’s climbing with Basso.

With time to kill, Peron popped into a local bike shop to look around. Imagine their surprise when a guy in full CSC team kit, on a team-issue Cervelo Soloist, shows up in their showroom! Andrea hopped on a Trek beach cruiser for a spin around the shop…I think he’s trying to find a way to ship it back to Italy!

• The big night at Risibisi started in the wine cellar (of course!) where Peron presented Fabio with his very own CSC team jersey. Fabio re-paid the favor by fitting Andrea with a Risibisi chef’s coat, and a tour of the kitchen.

Check out the menu for Peron’s party…all Italian specialties, whipped up by Chef Fabio Flagiello… 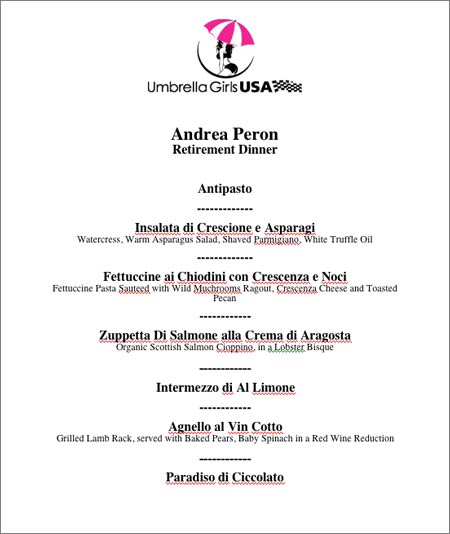 • These Italian guys are total babe magnets…witness Andrea along with four of the Proman/Paradigm team racers.

• Wine, women…all Andrea needed was a song at his retirement dinner! That problem was solved when “Fratelli Italia”…the Italian national anthem…was played on the house sound system at Risibisi.

That’s Umbrella Girls owner Ann Asiano on the left. She’s the brains behind this big bash.

• Now, this is the right way to kiss a career goodbye! Two of the Umbrella Girls give Andrea one last podium-style sendoff.

So, what’s next for Andrea Peron? He’ll probably spend most of the week trying to recover from his retirement party…then he’s headed back to Italy. Look for Andrea at the Giro d’Italia in May. He’s working for the race organizers, and you can bet we’ll use his knowledge of the Giro to keep PEZ fans informed on the latest inside info in Italia!

Ear Candy ’06: Send Us Your Playlists!

Get PEZ’d This Christmas: Free Caps For All!