A Quick Trip To The Trenches In Belgium

The Pro Tour may dominate the news but in the Flemish Heartland, the world of the kermesses is in full swing. The barriers line the high streets, the Europop blares, the cafes and bars reek of embrocation and all the while, the frites fry by the kilo.

A man at the heart of this world is Kingsnorth International Wheelers’ Ian Whitehead; originally from England he’s gone completely ‘native’ now – the last vestige of Englishness disappeared when his ‘dot BE’ email appeared, earlier this year.

Kingsnorth was set up to provide a route into the world of Flemish racing for ‘Anglo’ riders – last year their man Jack Bauer moved seamlessly up through the ranks to the New Zealand Elite road race title and a place on the British Endura pro team.

PEZ’s Belgian talent spotter, Viktor has picked up on a new man on the way up – but first, we asked Ian what’s being going on among the cobbles and canals.

‘There’s a new team website, www.kiwhee2010.webs.com and Heidi Lanoo does a great job for us with photography.
We have a new sponsor on board, Het Bouw Team, which is a building firm and the dog food company is back, Euro Premium; we still have the Augustin Brewery, Nico Lapage clothing and Giant Bikes on board.

Viktor is right, Douglas Repacholi might well be ‘the new Jack’ – we’ll let you have a word with him:”

PEZ: Why Belgium, Douglas?
I heard it’s the best racing you can get, not too hilly – which is good for me – the competition is good and you can race all the time. 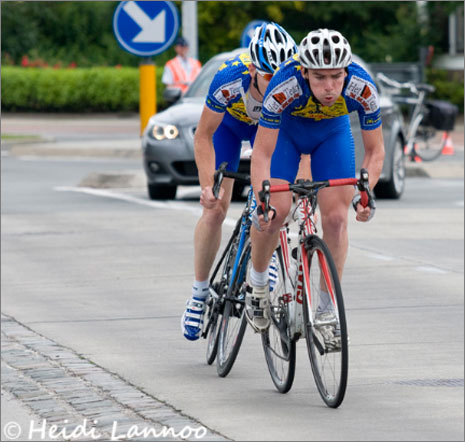 PEZ: Why Kingsnorth?
A friend lined it all up for me.

PEZ: What’s your background?
I rode a lot of track back home but this last year have decided to concentrate on the road.

PEZ: How have the results been going?
I’ve had a couple of seconds and several top fives, I’m going decent and hope to get a win. I’ve been racing a lot with Mario Willems – he’s with most moves that go! 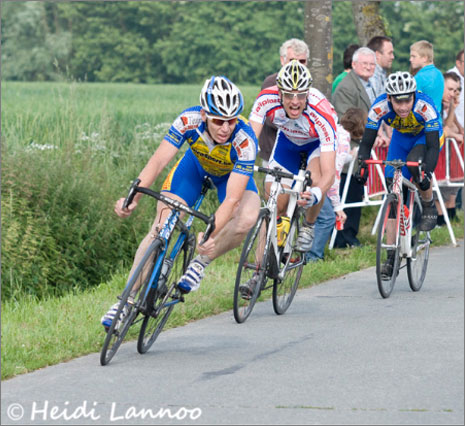 Douglas and Mario on the way to another win.

PEZ: What’s the good bits about Belgium?
The sheer amount and quality of racing – you don’t really have to train as such, just race and recover. I also like that there’s a lot of history here, not like Australia where nothing goes back that far.

PEZ: And the negatives?
The language is a struggle but most folks speak English and the weather hasn’t been too bad. 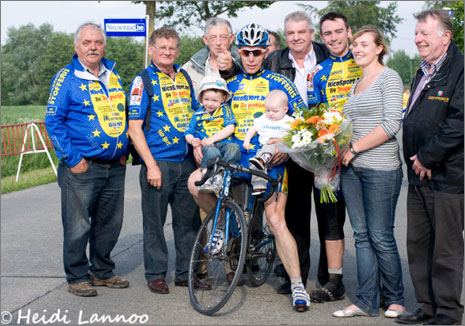 Mario with his children following the win, with Douglas peaking in from second place.

PEZ: Any homesickness?
Not really, I’ve only been away a month and there’s a social scene here.

PEZ: How’s the equipment holding up?
I haven’t had any dramas, but you see so many guys with problems; it’s an unforgiving race environment but I guess that’s part of the attraction. 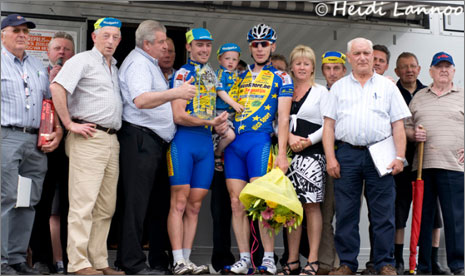 Mario and Douglas on the podium.

PEZ: Who do you respect in the peloton?
Tony Bracke and Patrick Cocquyt – they’re solid, stand out guys; Cocquyt is nearly 50 and still winning a lot of races, I hope I’m like that when I’m 50! 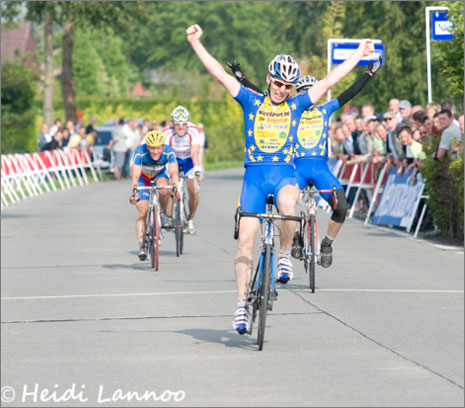 It doesn’t get much better than a 1-2 finish.

PEZ: What are your goals?
To enjoy my racing – in Australia we only race on the weekend so here I’m enjoying being able to race as much as we do – competing at this level can only make you bigger and better, I’m still only 22 and enjoying it.

PEZ: How does a typical week go?
I’ll race twice on the weekend and at least once mid-week; plus I’ll squeeze in a motor paced session along the canal – you need that to get the leg speed, not just bogged down in the big gears. Recovery rides are a couple of hours, easy – the rest of the time it’s relax and keep out of trouble, hang out go for a coffee.

PEZ: Do you do all your own cooking and washing?
Yeah, we stay on the farm and pretty much look after our selves, cooking, washing, cleaning – once you get organised about who’s doing what, it’s OK. 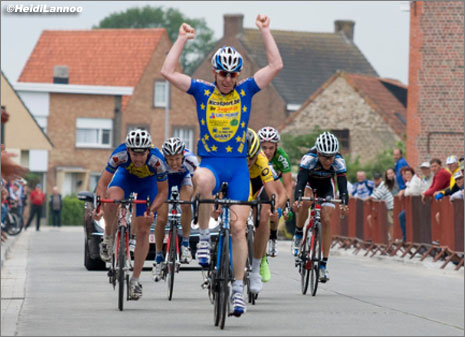 Mario for the win, Douglas in third.

PEZ: Back to Oz for the winter?
Yeah, I’m riding the Tour of the Southland in New Zealand in November so I’ll be here until October, I think.

PEZ: Advice for our readers thinking about taking the plunge?
Give it a go! You can’t die wondering – and you only live once!

***
We like this man’s attitude; we’ll keep you posted on how Mario, Dougie, Guy and the rest are going as the season progresses.