One of the most critical members behind cycling success is the soigneur. During our long transfer on the Tour trip between Toulouse and Albon, I rode shotgun and chatted with soigneur Garry Beckett about the highs and the lows of the job, the crazy six-day circuit, and working with World track pursuit champion Bradley Wiggins.

South Londoner Garry Beckett is one interesting (and damned funny) bloke. As a youngster, he grew up steeped in typical British cycling tradition, following in his father’s footsteps as a trackie and time trial fanatic. He later ditched life in the business world back in 1997 to follow his first love of cycling, which evolved into soigneur work in the crazy carnival world of six-day racing, the British Cycling Federation (BCF), and now also the road scene with Saturn and T-Mobile. 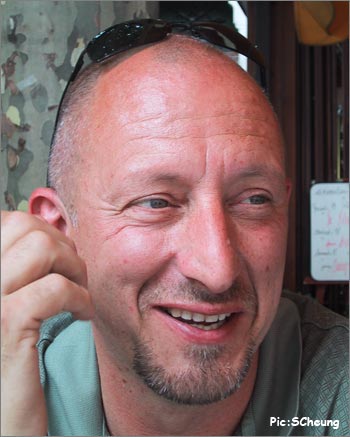 Pez: How did you get started becoming a soigneur?

Garry Beckett Hard to say really. I was getting tired of the business life and was looking for something else. I’ve always been around cycling, and the opportunity came up to help with some team projects. I didn’t have massage training at the time, but the other soigneurs thought I had a lot of potential and really encouraged me to pursue the profession further and to get massage training. It worked out very well, as the BCF was making the push about the same time to have all their soigneurs professionally certified in massage therapy.

But really, massage is only 10% of the soigneur’s work. There’s so much more that makes a good soigneur.

Pez: So what does make a good soigneur?

GB First off, you’ve got to be willing to work incredibly hard and do whatever it takes to take care of your team or rider. A soigneur’s job description is essentially anything and everything under the sun, so you’ve got to be willing to always go the extra mile and pitch in anytime and anywhere. It also takes lots of organization and time management skills being able to keep all the balls juggling at once, from getting the feeds ready to making sure you know where you’re driving to and getting there on time.

Obviously, good people skills are critical along with keeping calm. The last thing a rider needs to see is everybody else around them all panicking when things go south. One thing that I probably bring to the table is being able to sense when a rider needs some encouragement and being able to say the right thing or shut the heck up as the case arises.

Pez: What’s your favourite part of the soigneur job?

GB Just being part of the team effort that brings about the podium or the victory and knowing you were a part of it. I’ve worked with Bradley Wiggins for a long time now, and he wanted me to work with him at the World’s last year but the BCF (British Cycling Federation) didn’t select me, so I took off for a holiday. I remember sitting on a beach in France with tears in my eyes as a mate of mine called from Melbourne to give me the play by play of his gold medal ride.

During this year’s Tour, I also recall Stuart O’Grady and me trading text messages back and forth in the early stages where he was feeling quite down. Then the next day he went off and won the stage and ended up on a bit of a tear. There’s been lots of little instances like that, and it’s knowing that you’ve helped in a small way that’s the biggest fix and that keeps me coming back for more.

Pez: So then what’s the worst part of the job?

GB Schlepping baggage everywhere across the world is not the most enjoyable thing, that’s for sure. Especially when something screws up, like having the room up a few flights at the opposite end of the hotel with the lifts not working. Or else the hotels getting the rooms messed up. Whether it’s your fault or not, you end up being the whipping boy. 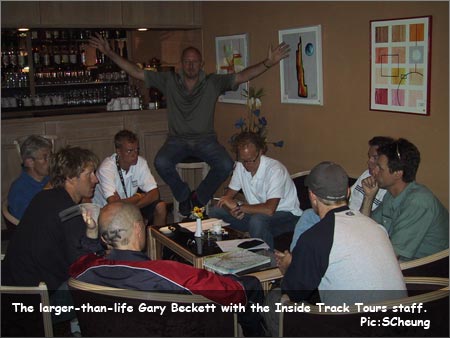 Pez: You’ve done track, six-days, and road. Tell us about the differences and your favourites

GB I work most the road now, and that’s great because the open roads are your office and you get to see a lot of territory. There’s also so much tradition with the big races that it’s really neat to be a part of that history. I don’t do track too much anymore for the contrasting reason. You typically see only the airport, the hotel, and the track. Not too much fun in doing that over and over all the time. With track, you’ve got to lug everything with you all the time: massage table, tons of coolers, and even your own drying machine for laundry.

However, I definitely have a soft spot for the six-day circuit, and always make sure that my schedule is cleared up for that. Six days are brilliant because they’re just a complete carnival and six days of true craziness. The circuit also has such incredible heritage and atmosphere, and each event is just as much a monument of the sport as the Classics on the road.

Pez: So tell us about your favourite six-day events and why?

GB Ghent’s got the lousiest track. It’s just like a bear pit in there, with the fans right on top of the racers. The infield’s horrendous, and we’re usually working in a tiny little cell. However, the proximity of the fans also gives it that unique atmosphere.

Munich is also something else, because it really is held as part of a huge carnival. You go above the track and there’s everything from a midway to a circus going on. So I would say those two are my favourites.

Pez: I’m guessing that it can be pretty tough for an English bloke to break into what is probably a tight-knit group of old school six-day soigneurs?

GB You’re right there. It’s a very closed shop of of Belgians and German soigneurs who have been working the circuit since Rome was built. Being with Bradley certainly gives you instant credibility, so does working the bar scene with them!

Pez: Tell us about the favourite athlete you’ve worked with.

GB Bradley Wiggins, no doubt about it. I’ve known him since he was a kid of 10, and there’s no way he’s not going to win the Gold in Athens. He is incredibly gifted and has a huge innate drive and work ethic. Like many high-level athletes, he can be somewhat demanding to work with at the races, but there’s no better feeling than to help somebody you’ve known for so long to succeed.

Bradley’s also just a terrific person. After he won the World’s last year, one of the first things he did was come down from Manchester to London to visit me and to show off the rainbow jersey and gold medal to my kids.

I’ve also gotten pretty close with the Aussie road contingent like O’Grady, Cooke, and McGee. The Aussies are terrific because they really are tough as nails and hard core. They have to if they want to survive over here.

About this time, we got pulled over by the Gendarmerie and got a ticket for overtaking incorrectly. 90 Euros later, we’re back on the road again and Garry tells me it’s his first ever ticket in all his years of soigneur work

Pez: No way, soigneurs drive even crazier than directeur sportifs and you’re telling me you’ve never got a ticket before?

GB God’s truth! There’s simply no excuses for being late at something like a feed, so you just do whatever you’ve got to do to get to where you need to go. One year at the Giro, the whole lot of us soigneurs were stuck behind the caravan and the peloton because of the way the course was organized. So the police just gave us an escort on the shoulder of the oncoming lane of the motorway and everybody was booting it at 160 km/h. I was in lead position behind the police, and it was a pretty cool feeling being king of the road that day.

GB Right-o mate. Let me know when you can make it over for the six-days and I’ll get you hooked up no worries!

Stephen Cheung, Pez’s Sport Science and Training Editor, is currently putting his theory into practice hauling his carcass across France with Inside Track Tours. His company, Podium Performance, also provides elite sport science and training support to provincial and national-level athletes in a number of sports. He can be reached for comments or coaching inquiries at [email protected].