Ten consecutive Grand Tours is quite an achievement, but then to top it off with a solo stage win is a dream come true. One of the hardest riders in the Pro peloton; Adam Hansen runs us through his Vuelta – Ten in a row, now that’s impressive.

The last week of the Vuelta; when Stage 19 finishes there will be just one mountain stage and one time trial stage to go and the stage to Cangas do Morrazo has ‘Degenkolb’ written all over it – that boy takes a bit of dropping on the hills.

Many teams are winless and the pressure from sponsors is intense; one of those teams is Lotto – it looks bleak for the Belgian lottery squad.

The break gets reeled in and the much depleted peloton hits the last climb of the day inside the last four K – as is the norm it doesn’t really register in the race ‘bible’ but it’s a nippy little snap coming as it does after the small sprockets have been in play.

A Sky rider attacks, Phil Gilbert counters for BMC and then a familiar big figure appears – Lotto’s Adam Hansen – who takes up the story . . . .

Adam Hansen: “The Sky and BMC riders slowed up and I was in a good position to move as the gradient was a little less steep. The two of them followed me and I swerved across the road to see what was happening – I was actually thinking that; ‘this would be a good point for someone to make a move!’

No one did, so I thought; ‘OK, I’ll go myself!’ When I saw I’d snuck five meters off the front – I just gave it everything.”

There was fatal hesitation behind the Aussie strongman and he was gone – Degenkolb did win; but only the sprint for second spot. Lotto’s Vuelta was a success and Adam Hansen made sure his 10th straight Grand Tour was even more memorable with that beautifully executed stage win. 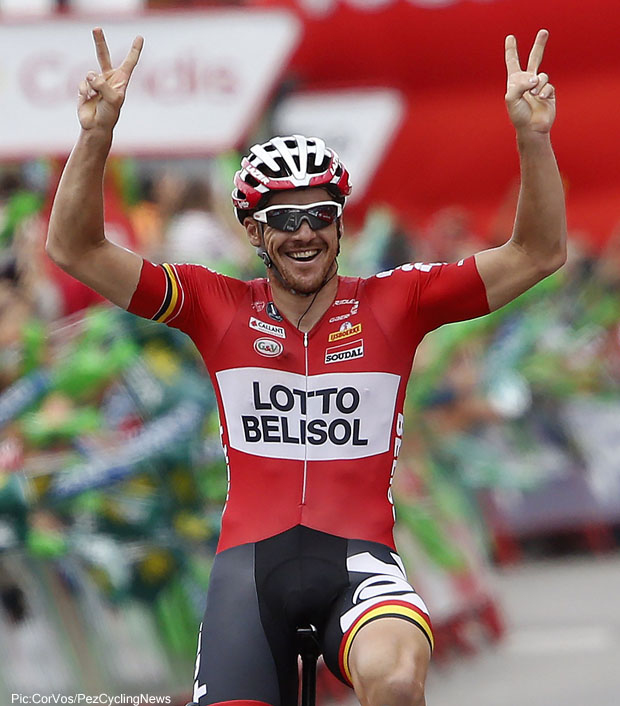 We continued by asking Adam about that sponsor pressure . . .
Yes, there’s a lot of pressure from the team and the sponsor and as the race goes on it gets more and more difficult to win a stage as everyone gets more and more tired. We went into the race with goals of a top 15 GC finish and a stage win; Maxime Montfort finished 16th on GC and we got our stage so the sponsors were happy.

PEZ: And was there champagne?
Yes, we had our normal dinner and a glass of champagne; we always do if we get a win – but not a huge celebration, not with a mountain stage the next day! 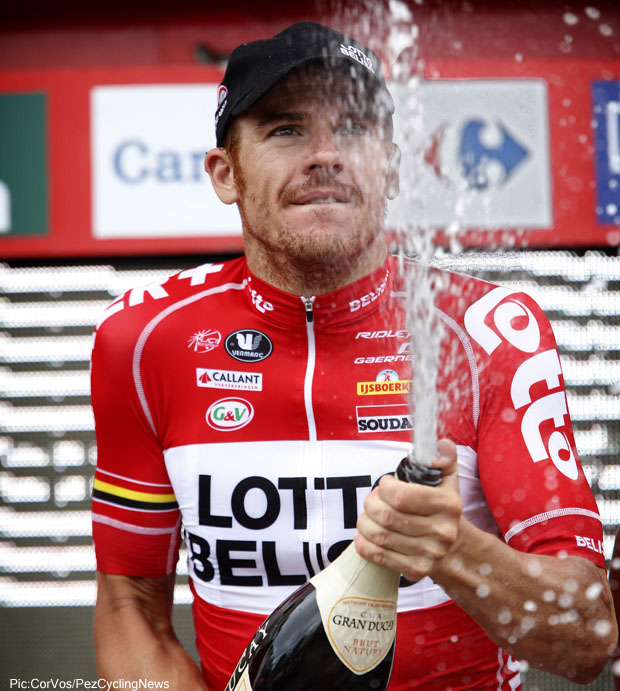 A little champagne after the stage win

PEZ: You’re the ideal man to judge; which race is toughest – Giro, Tour or Vuelta?
It changes every year; the Giro has the toughest profile and then there’s the weather – rain and even snow. In the Tour you have the speed, the nerves and the pressure of the whole world watching you.

The Vuelta used to be a race where the neo-pros took their chances and the big riders rode into form for the Worlds. But this year, with the quality of riders who were here it was very hard – for me the Vuelta was the toughest of the three, this year.

PEZ: Which stage was toughest?
The ‘Queen Stage’ before the second rest day; Stage 16 to La Farrapona was the toughest by a considerable margin. Even before the start there were a lot of guys calculating what the time cut would be and I believe that the gruppetto made it home by 20 seconds. At one point the gruppetto was told that they only had 40 seconds in hand but no one could go any harder, everyone was on the limit. I wasn’t in the gruppetto and I never panic in those situations but it started me worrying about what Stage 20 to Ancares was going to be like – although in the event I was OK on that stage. 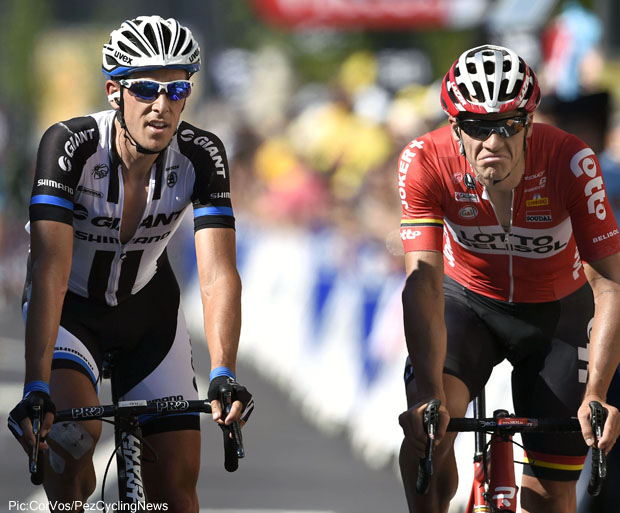 PEZ: What about that heat in the first week?
I love hot days, really love them. On days like that you can see that the other guys’ performance drops but mine stays the same. On those days I’m about the only one who’s capable of going back to the car for bottles – that’s the benefit of coming from Australia where the weather is even hotter.

PEZ: What about the rain in the final time trial?
It began to bucket down, three riders in front of me – I was standing there with Phil Gilbert and Cadel Evans and we were all just laughing, there was nothing else you could do. The sprinters had all gone off early and were giving it ‘full gas’ but there’s nothing you can do – the stage profile showed the parcours to be flat but it was actually very technical with tricky corners and descents.

We just let out tyres down and got on with it, you can’t complain, just laugh. 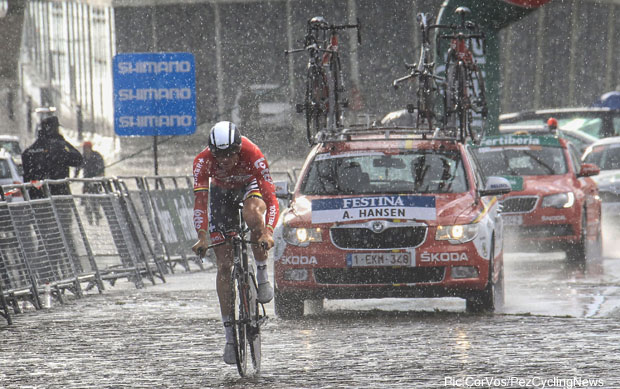 Rain! Just get on with it

PEZ: Was there time for a celebration after the finish?
It was very difficult to fly home straight out of Santiago de Compostella on Sunday night so most riders spent the night there. We had a team dinner, a traditional Spanish meal – it was really nice, all sitting chatting, relaxing.

It’s a Belgian team but we have a New Zealander (Greg Henderson), a Norwegian (Vegard Breen) and a Dutchman (Pim Ligthart) on the squad so there was a lot of joking going on – it was a really good evening. 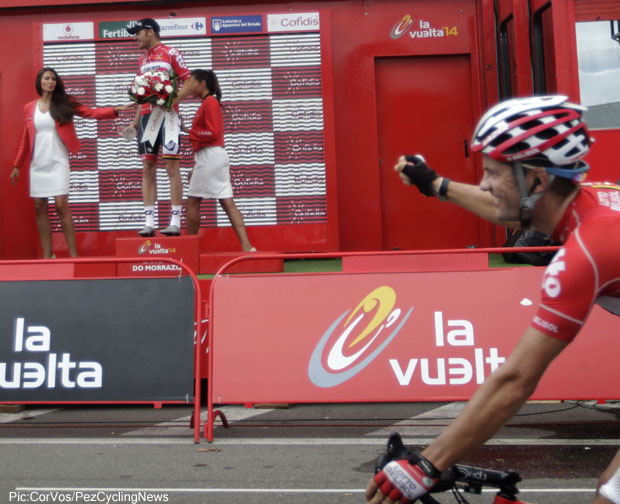 PEZ: And do you ride the Worlds?
I’d hoped to be on the squad, yes. I was asked to last year but passed on it due to personal circumstances – but this year I’m going well and very happy to be part of it. We have a very strong team with Simon Gerrans in great form, Rohan Dennis in very good shape, Michael Matthews too – and you have Cadel Evan’s huge experience. And there are guys like me who can ride on the front all day . . .

PEZ: Do you ride the TTT Worlds with Lotto?
Yeah, so there’s not much time to rest, I only have two days at home before I travel back to Spain for the TTT. The team will comprise half guys who rode the Vuelta and half fresh guys – the fresh guys will give us Vuelta boys a hard time in training before the race, but come the race on the Sunday us Vuelta boys will be able to return the favour.

PEZ: Not much time for recovery?
There’s not a lot of time until the TTT; I’ll have three days off the bike. We don’t do too much TTT, we’re not one of the specialist squads like Quick-Step or GreenEDGE, we don’t have the time trial specialists and don’t know what to expect on the day.

But it’s a team race and the sport directors love it . . .

PEZ: Have you had a look at the Worlds parcours – they’re saying that it’s not as hard as first thought and sprinters might survive?
I’ve had a little bit of a look but not in detail. The word in the peloton is that the sprinters can survive, but one lap is one thing, 14 laps is another – when you add the climbing up there’s the equivalent to a Queen Stage in a Grand Tour. 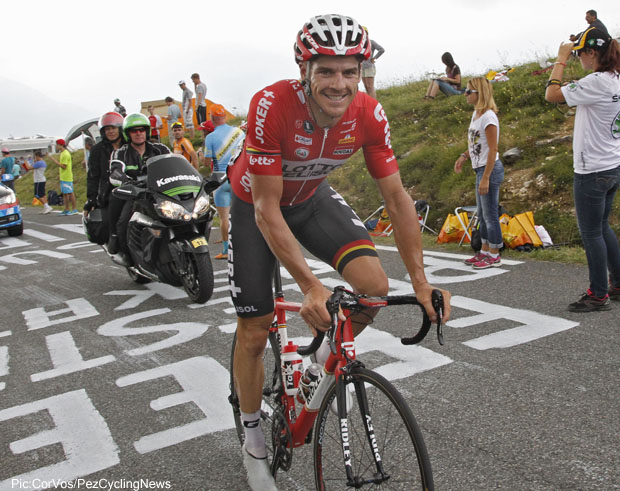 A happy Hansen in Spain

PEZ: Final, daft question – if you could change anything about the Vuelta?
No! I like the race, there’s snow in the Giro, stress in the Tour; in Spain you have late starts and it doesn’t rain much – I really enjoy it the way it is.

With thanks and congratulations to Mr. Hansen for keeping us entertained and giving freely of his time to PEZ.