By Edmond Hood On Aug 24, 2014
Share
Like PEZ? Why not subscribe to our weekly newsletter to receive updates and reminders on what's cool in road cycling?

Rider Interview: Australian Adam Hansen: Compulsive Grand Tour rider, hard worker, cycle shoe designer and manufacturer and all-round funny guy. He is at the start of the 2014 Vuelta a España in Jerez to compete in his 10th Grand Tour in a row. Ed Hood got hold of the Lotto Belisol rider in the South of Spain.

As the clans gathered in Jerez for the last big battle of the year, former Australian time trial champion, 2013 Giro stage winner, devourer of Grand Tours and designer of revolutionary cycling shoes, Lotto’s Adam Hansen took time to give PEZ his views on all things Vuelta:

PEZ: Let’s get the free ad. in first – your shoes, they looked so much less ‘prototype’ at le Tour?
They’re coming along real nice. One more step and they’ll be just right; but they need some more time. Maybe the final version will be ready for the Tour of Beijing? 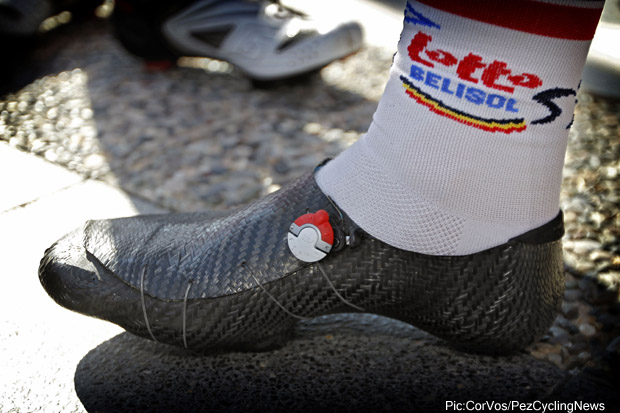 An earlier version of the Hansen shoe

PEZ: Tell us about the rest of the Hanseeno ‘goodies,’ please.
Well, everything is on the website www.hanseeno.com for now. Team hats have been going well, plus the shirts. I will be adding a new style of shirt soon. But overall it’s looking good. I’ve had positive feedback from customers and it’s nice to hear that, very satisfying. 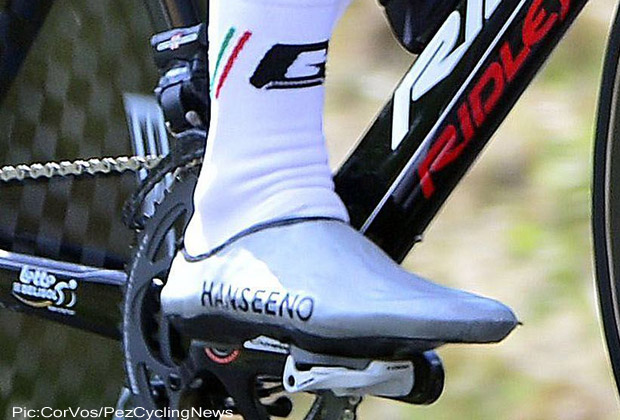 PEZ: How much of a rest did you take post Tour?
For seven days I did nothing.

PEZ: Do you have to worry about your weight right after a Grand Tour?
No, I’m really good with my diet. I had good weight in the Tour. This time last year I lost 4kg between the Tour and Vuelta. This year I didn’t want to do the same – more maintain my weight and lose those 4kgs starting the last week and be in good form for Beijing. That will be my final 2014 goal.

PEZ: Lotto must be pleased with their Tour with Gallopin and Greipel’s successes?
Yes, overall they’re happy. Only three teams wore yellow and we were one of them. And we took 10% of the stage wins also – which is great.

PEZ: What’s been your programme into the Vuelta?
If you mean racing, nothing, just training. 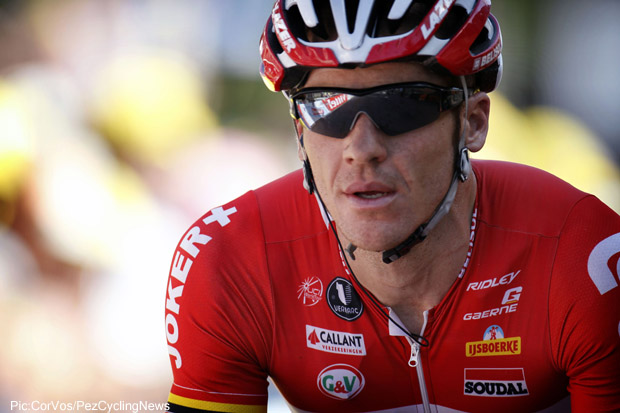 PEZ: How many Vuelta’s and Grand Tours is this now?
This is my sixth Vuelta and my 10th Grandy straight. Almost enough for a reason to retire . . .

PEZ: What are the team’s goals for the race?
We have Maxime Monfort for GC and Jens Debusschere for the sprints. Jurgen Van Den Broeck to see how he is – either stage wins or GC? Pim Ligthart and I for breakaways and then the rest for their own chances and helping. It’s a really open Vuelta for us.

PEZ: Who will you be rooming with, what are there good and bad points?
Greg Hendy. Good points: same interests, we get along well, like each other – and he doesn’t smell. Bad points: loves air con, I hate it – think I already have a sore throat from it.

PEZ: What’s the ‘Joker’ in Lotto?
That’s a sub company of the Lottery in Belgium. Almost the same but a different style of gambling. 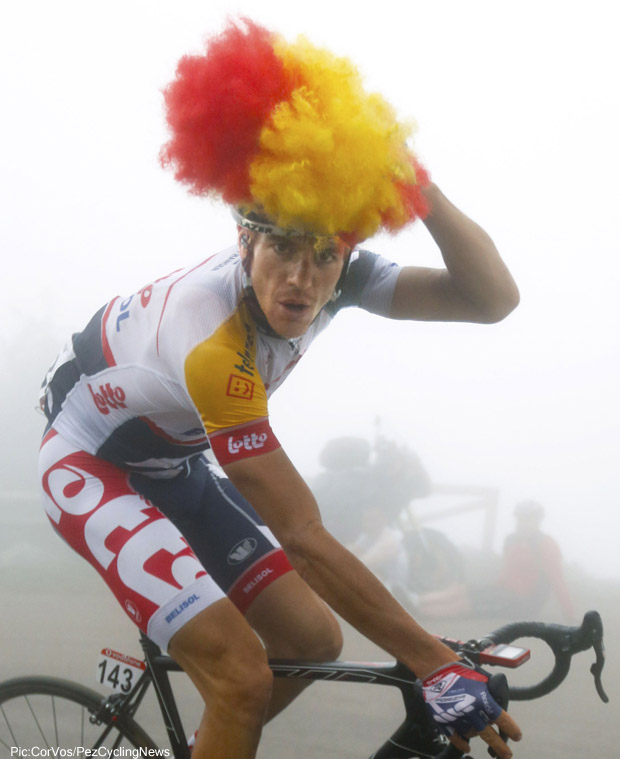 Adam: Bit of a joker!

PEZ: The Vuelta is much less ‘janitorial’ for journos than the Tour, is it the same for riders?
Yes and no. It’s the most relaxed of the three Grand Tours; but on the same side, a lot of riders know this so they take more of their own chances – you get a lot of hungry young motivated riders. So sometimes it’s hard and very serious.

PEZ: TTT to kick off – is that a discipline you like?
Yeah, I do. Love how the whole team gets involved and works together. Everyone’s nervous and not wanting to disappoint the team. In stage races or normal road races you can hide. But in a TTT there’s no hiding.

PEZ: Covadonga – tell us about it.
Beautiful place, I was there on holidays once. A must see . . . off the bike.

PEZ: No Madrid finish; TT in Compostella instead, a good or bad move?
Its ok – change is good. But I do like the Madrid stage very much.

PEZ: Will you be doing the whole race just on gels?
Yeah, I think so. However our team chef makes some pretty good lactose free muffins I might steal for the race.

PEZ: On the subject of nutrition – Lotto take their own chef?
Yes and at the rate he is going, we’ll all put on weight. His food is so good… oh my…. 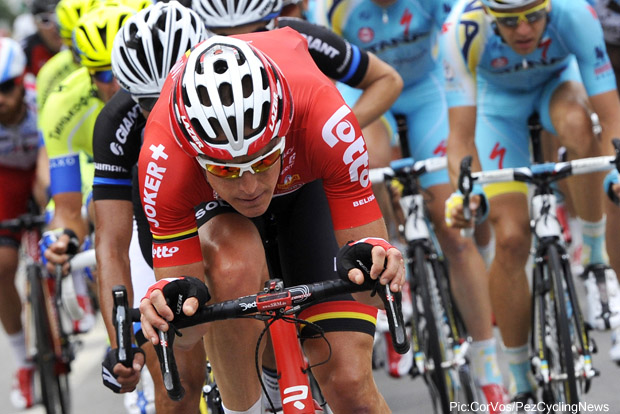 PEZ: How do you spend your down time on a Grand Tour?
On my laptop. I actually brought a book with me – made from paper. So I started that, going to be full on: “The transformation of consciousness . . .

PEZ: Do you control the play list on the bus stereo? Give us a few examples.
No that’s Greg. He was playing Spice Girls, bit of Aqua (I’m a Barbie Girl) and Britney: He loves Britney… We’re a bit over it.

PEZ: And what happens after the Vuelta?
The TTT, Worlds (I hope) and Tour of Beijing.

The man is never boring – we’ll be keeping an eye on him as the Vuelta makes it’s way around Spain for the next three weeks. 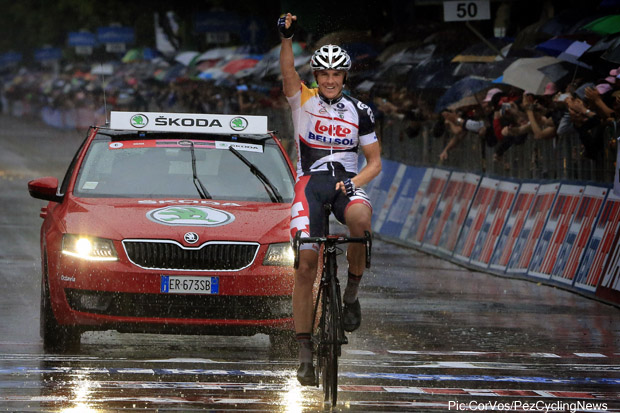