Rider Interview: Belgium has always been the opening a rider needs to success, maybe not the easiest way, but it is the Heartland of cycle sport. Adam Lewis is the next possible ‘Big Thing’ to hit the roads of Flanders and so Ed Hood caught up with him on a rest day. 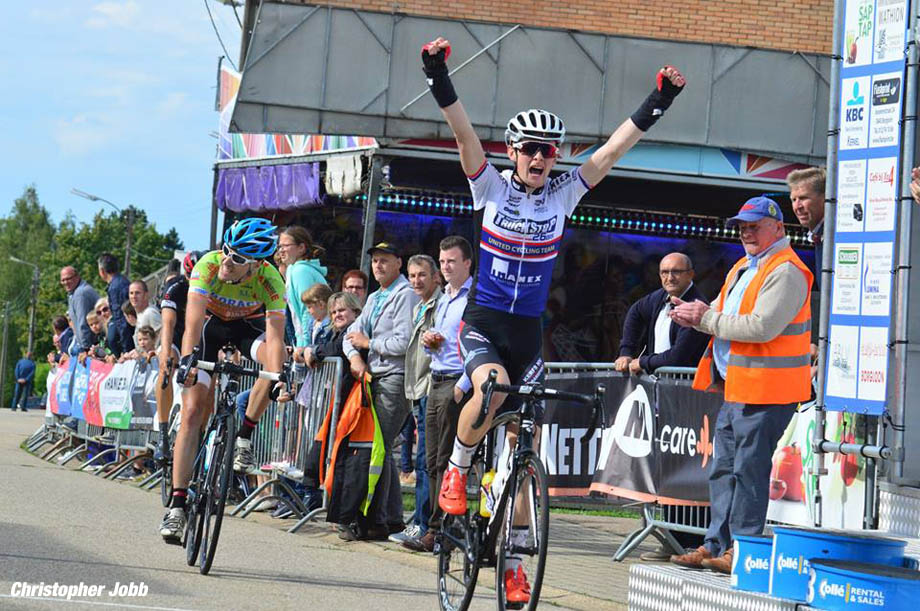 If there’s a Belgian in the mix during those 23 days in July; an Eddy Merckx or a Lucien Van Impe then the country goes mad for it – but truth is that if there was no more Tour de France; or Belgium was expelled from the UCI it wouldn’t make any difference to the sport of cycling in the Heartland. It’s still the place where the biggest and best races of the year take place every spring and where most aspiring professionals head to ‘make it big’ – or realise that it’s too daunting a dream. There’s a steady stream of US, Antipodean and British riders make their way to the flatlands to join the fray.

Adam Lewis from Wolverhampton – home of the world’s greatest-ever individual pursuiter, Hugh Porter – in England is another one of many to benefit from the David Rayner Fund to support his bid to ‘make it’ on this toughest of stages. An organisation set up to honour the memory of British rider David Rayner who raced as a professional in Britain, Europe and US with teams like Raleigh-Banana, Buckler and IME but died aged just 27 in a dreadful night club incident in 1994 when an over-zealous ‘bouncer’ took things too far.

The fund’s website expresses its purpose like this;
After his tragic death, the cycling community wanted to support his memory by giving other young riders the chance to follow in Dave’s footsteps and since then over £600,000 in grants have been given to riders to enable them to race abroad. Among the riders supported have been Dave Millar (one of the very first recipients of a grant), through to more recent champions like Adam Yates. 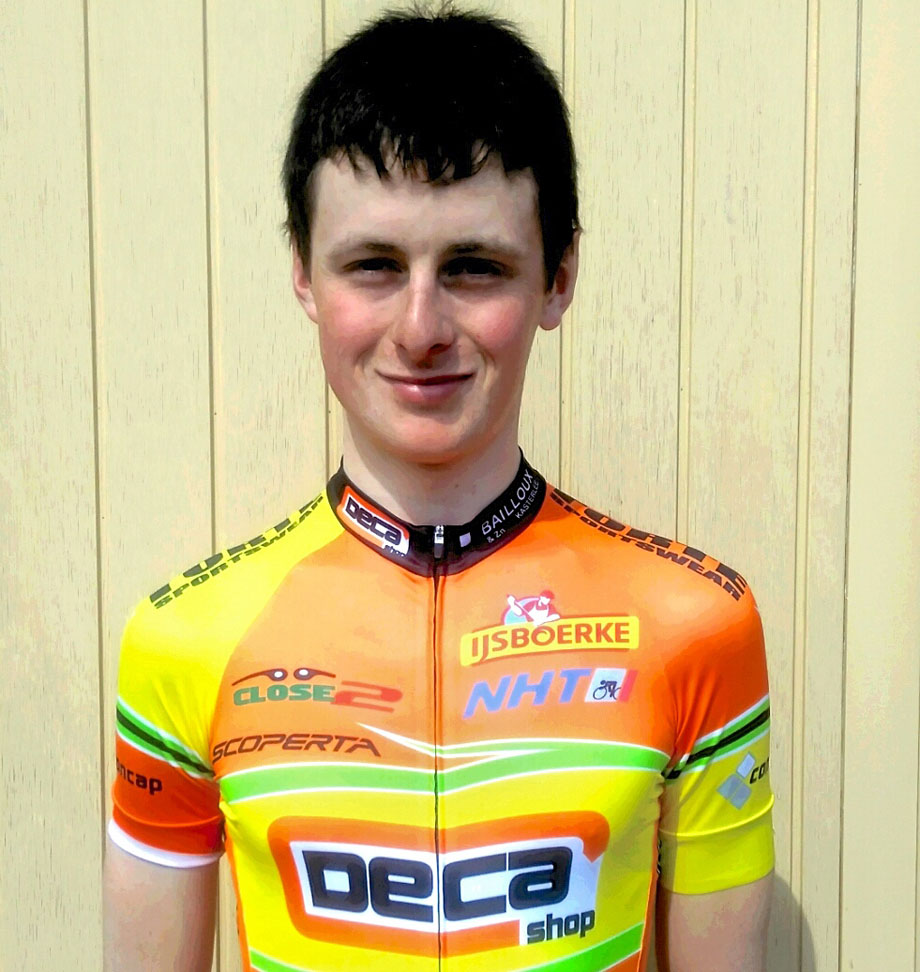 PEZ caught up with young Mr. Lewis on a recovery day as he prepared to start the Tour of Namur the next day.

PEZ: That’s a stage race, Adam?
Adam Lewis: Yes, over five days, it’s an important race here; guys like Gianni Meersman, Levi Leipheimer and Etienne De Wilde have won it in the past. Our club, United Cycling Team – Truckstop ride all the U23 stage races as well as UCI 1.2 races and the national ‘Top Competition’ events. On Namur we’ll get full back up, all our accommodation, meals and massage after every stage.

PEZ: You’re from Wolverhampton?
Yes, I raced there as a youth and junior but my time as a senior has been spent here; I came over as a junior to race and liked the aggressive style of racing – it’s accessible and you could race every day if you wanted to. 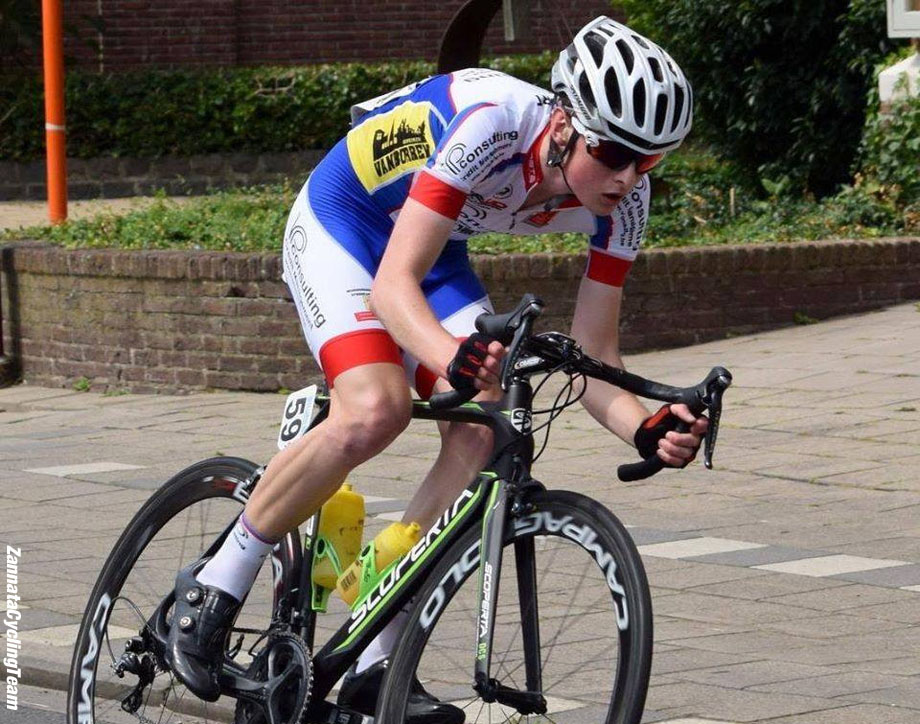 PEZ: And the Rayner fund is central to your being here?
Oh yes, they’ve provided assistance every year I’ve been here; I applied in the September and was approved for funding in the December – without them I wouldn’t be here. A season or two ago the team I was with folded and Joscelin Ryan who’s a stalwart of the Fund found me a new a team and a place to stay.

PEZ: Did you ever consider the ‘GB route’ with British Cycling and the Manchester Academy?
I applied as a junior and attended a few junior camps but was never accepted – this my fourth season here, time flies! 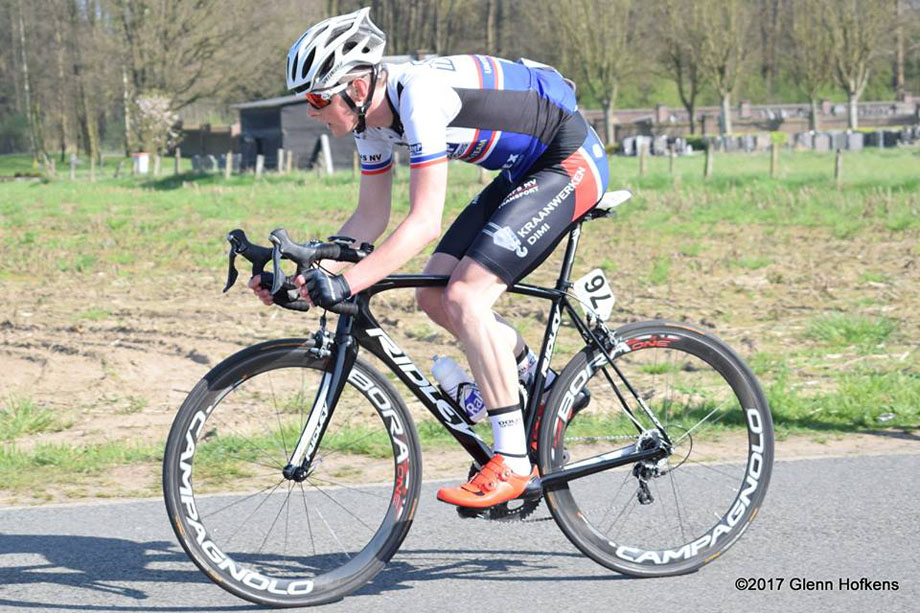 PEZ: You stay up towards Antwerp?
About 50K south of Antwerp at the junction of three provinces – Antwerp, Brabant and Limburg, proper Heartland, there are just so many races to choose from – you could race most days if you wanted to.

PEZ: How do you get to races?
When I first came over I had to pedal out but the locals at the cycling cafe get to know you and want to help so now, I get a lift out to races; they just love the sport and helping young riders; I guess their big reward comes if you turn pro and become a ‘name’ – they were there for you right at the start. 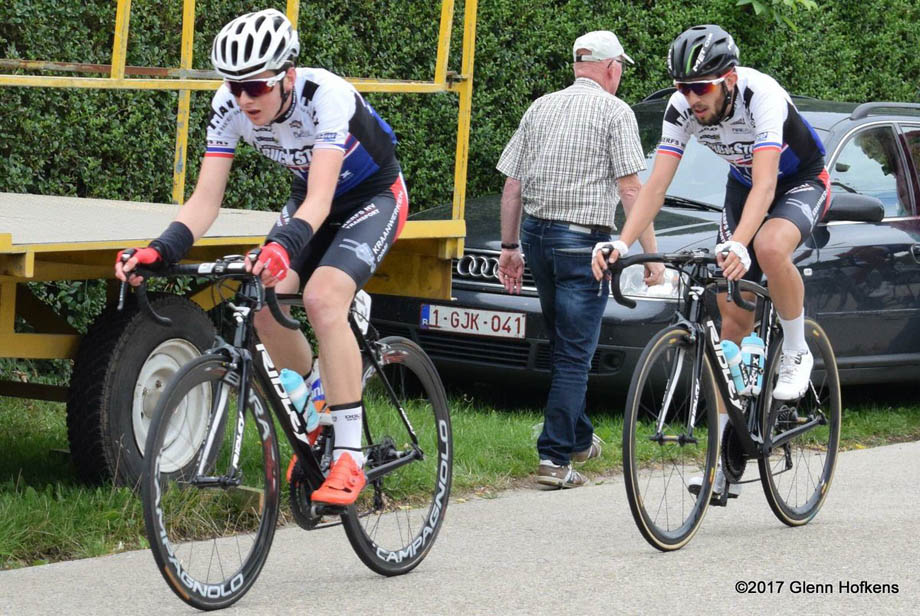 PEZ: You had a bit of an injury back in June?
Yes, I broke my scaphoid in a crash in a race in France; in the hospital the doctor said that if I put a brace on it for 10 days it would be fine. But when I got back to Belgium I went to hospital and they put me in plaster for four weeks. I couldn’t ride on the road so it was two turbo sessions each day for four weeks to keep in shape. 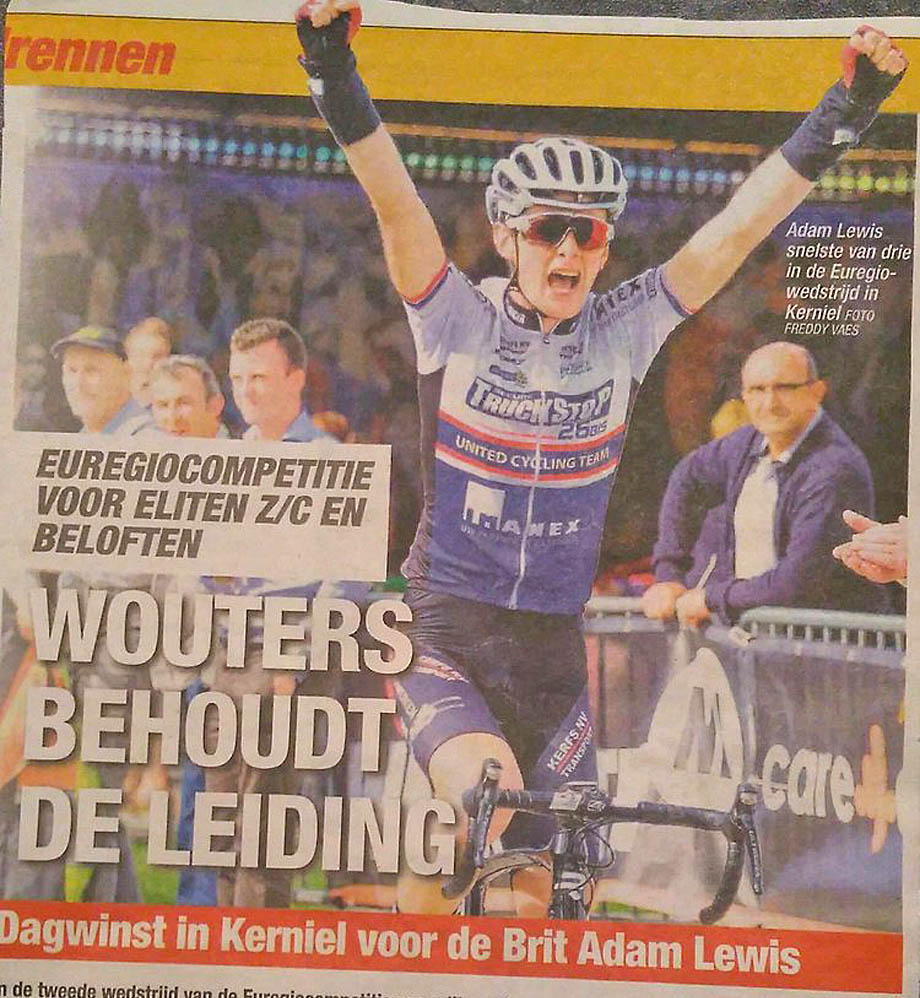 PEZ: It’s obviously paid off.
Yes, since my injury I’ve won in Kerniel-Borglon (UCi 1.12A) where I went away with two K to go – and I was third in a kermis. Before my injury I was top 20 in the Flèche Ardennais and was in the lead group in U23 Liege-Bastogne-Liege until the distance caught up with me.

PEZ: What does a typical week look like?
Monday is recovery day, a spin to the cafe and back; Tuesday, Wednesday, Thursday is a training block, with a race on the Wednesday then there’ll be a race at the weekend – we ride five stage races throughout the season and all the big inter-club races. 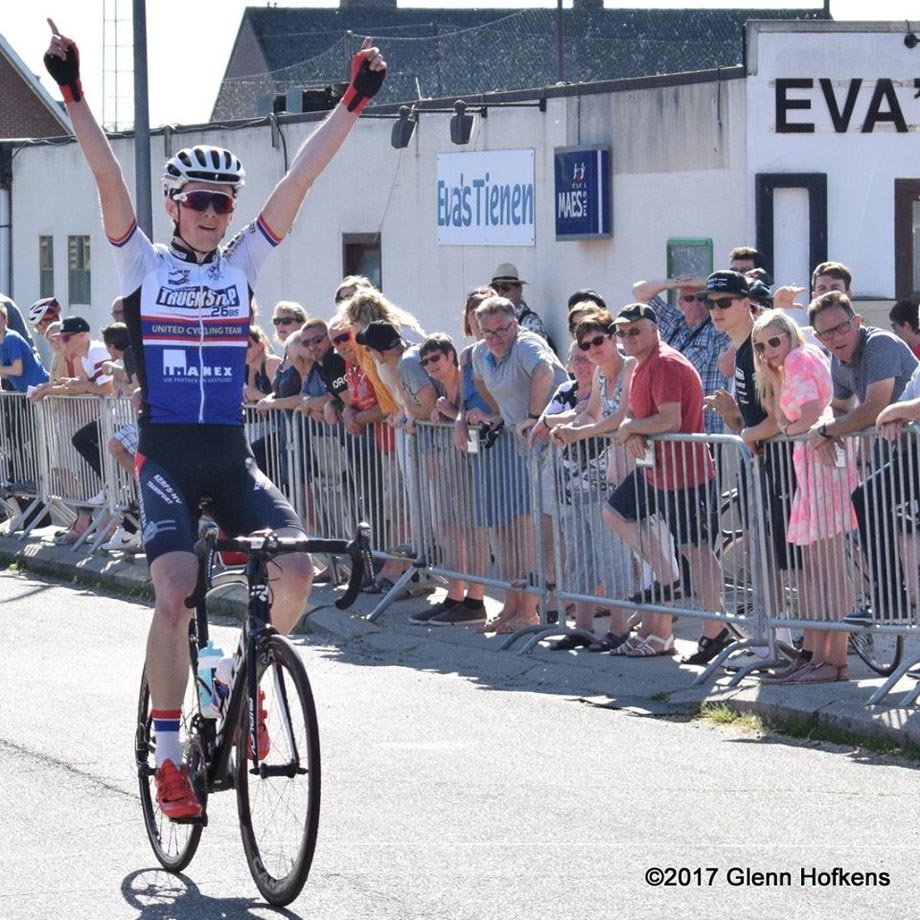 PEZ: Do you come up against the Kermis Kings much, Guy Smet or Mario Willems?
I have ridden against them in the past but not so much in this area where it tends to be young guys aspiring to be professionals – but there are number of ex-pros and kermis specialists in West Flanders, they’re not young but it’s surprising how strong they still are. And of course, that’s where the combines are. . .

PEZ: Do you miss much about the UK?
I don’t get home sick, obviously you miss your family and friends but there’s a good group of guys here and you get know and befriend the locals. I go home to the UK from October to February and find part time work, whatever I can get my hands on but that also allows me time to train. 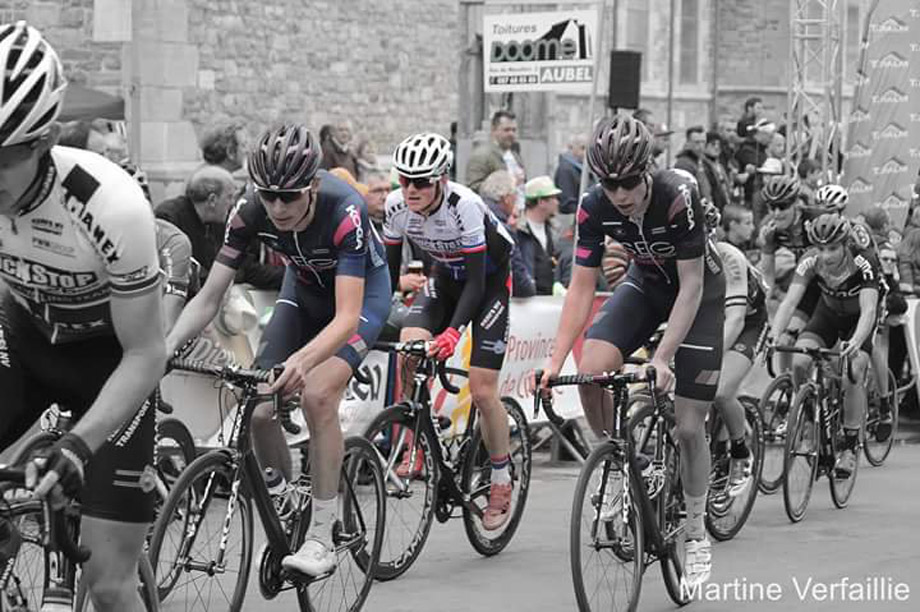 PEZ: What’s the ultimate goal?
To be a professional bike rider and get paid to ride my bike – I hope to move up to a continental team and ride at a higher level. Tim Harris (ex-British Pro Road Race and Crit Champion, based in Belgium and a Rayner Fund stalwart, ed.) says I have the capability – but I have to get the wins.

# Yes, those pro talent scouts do like to see wins on the board – PEZ wishes Adam every success with his ambitions. # 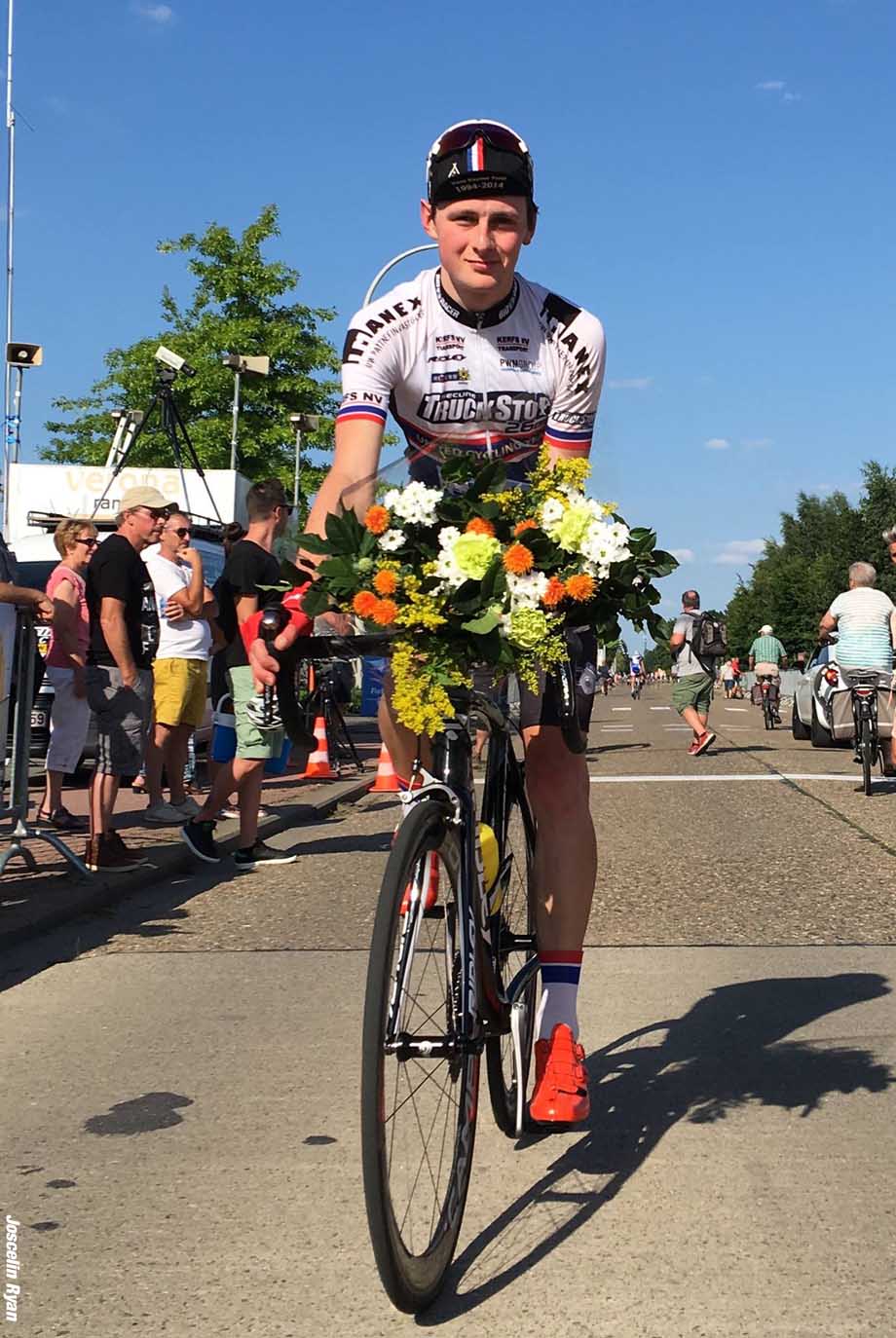