Alan McCormack: An Irishman in the US Part 1

Rider Interview: In this two part interview, Ed Hood has a long talk with Alan McCormack about his long and varied life/cycling career. From Irish champion to British and Belgian pro, to racing and living in the US. Three phases of a full life. 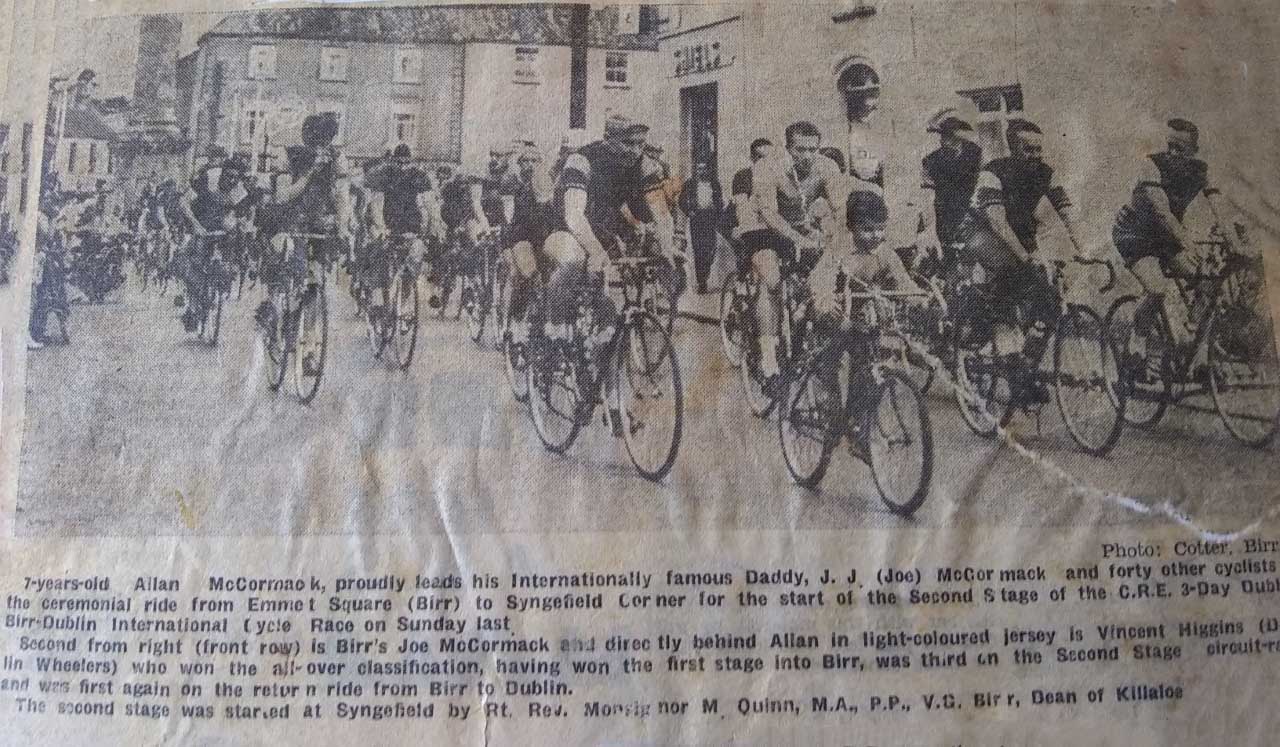 I used to look at those ‘Winning’ magazines in the mid-80’s and think how glamorous and cool the US scene looked, especially those super-fast criteriums with huge crowds and big bucks sponsorship and prize lists. Cycling was big in the US in that era, courtesy the successes of riders like Connie Carpenter, Steve Hegg, Mark Gorski and Alexi Grewal at the ’84 Olympics and the Tour de France adventures of Greg Lemond.

A man who lived and raced through that golden era of US racing was Irishman, Alan McCormack who was not only a North American ‘crit King’ but rode the Olympics and Vuelta along the way. It’s about time PEZ caught up with the Dubliner; in ‘Part One’ we discuss his career up until his full time commitment to the US scene. 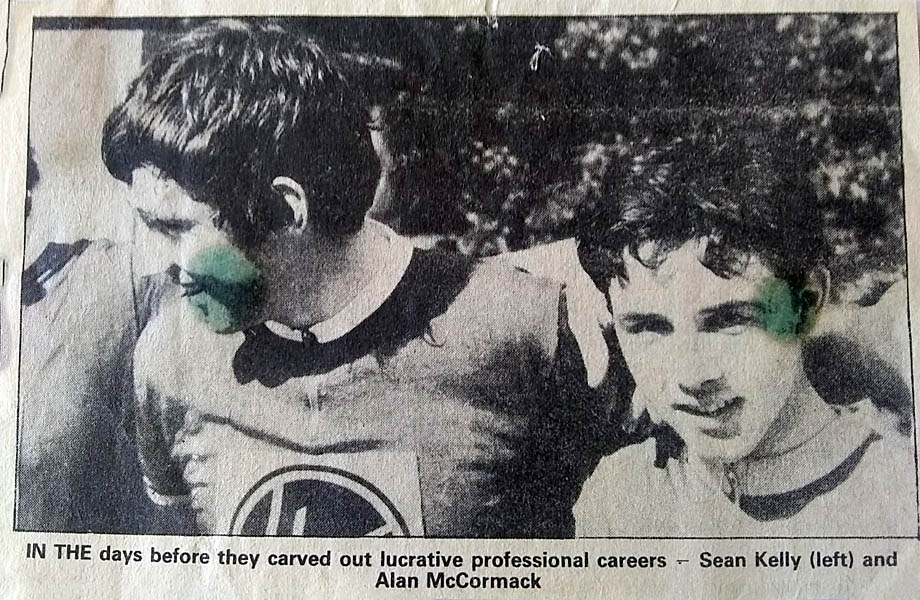 With a young ‘King Kelly’

PEZ: You were second in the 1973 Irish Junior Road Race Championships Alan, to some chap called Kelly?
Alan McCormack: Yeah, there were three of us away, it was an uphill sprint, I launched first but Sean was always quicker than me.

PEZ: During 74/75 you won a real shed load of races in Ireland.
Yes, and I was on Irish international teams during these years, as a junior with all those older guys who had tricks up their sleeves. My late dad was a cyclist, JJ McCormack he was Irish National Road Race Champion and rode the Worlds; we’d drive all over Ireland together to my races. 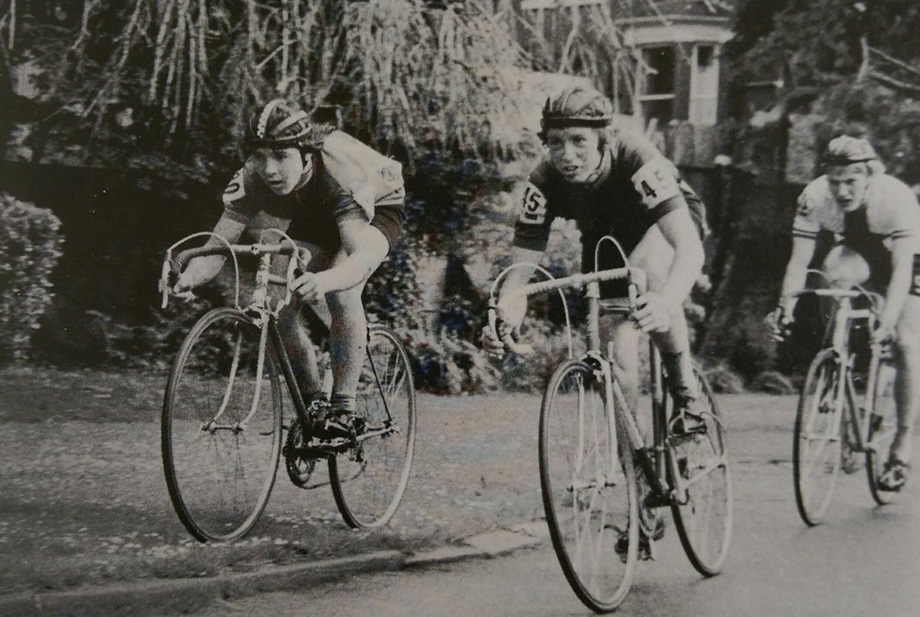 McCormack taking to the grass

PEZ: You rode the ’76 Olympics in Montreal?
That was horrible! It rained on the day of the race and that circuit was tough – Mount Royal, I rode it again, later on in my US pro days. The Irish Cycling Federation got their planning wrong, we were there for three weeks before with just bike paths to train on and then I crashed a few days before the race. 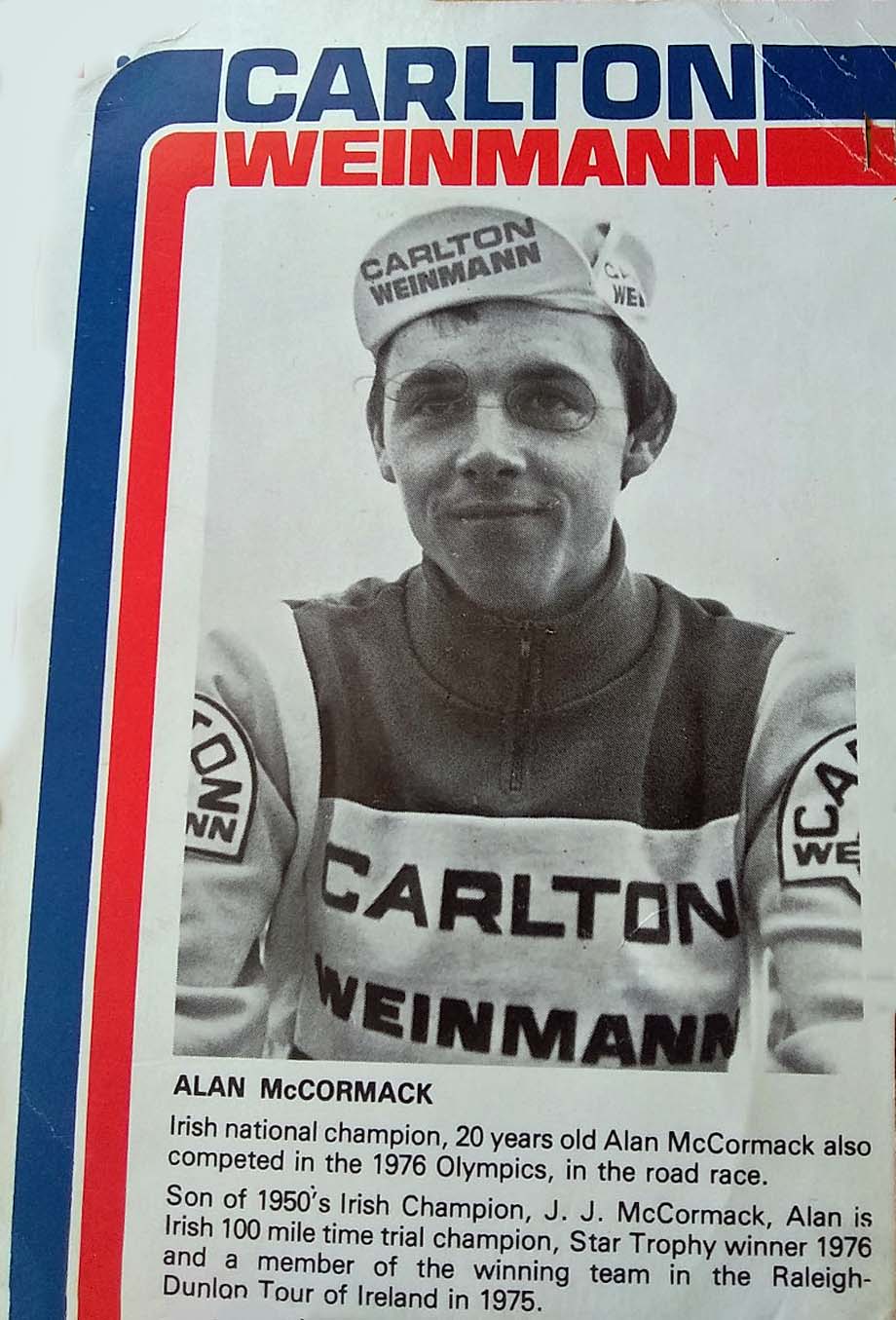 A pro in Britain with Carlton-Weinmann

PEZ: You turned pro in the UK in ’77 and rode the world’s longest single day race; London to Holyhead?
Those were great times, the English pros were good lads; I’d been over to England with the Irish Team for the ‘Plymouth Week’ of racing when the Tour de France came to England in 1974 and was fascinated by the English pros. London to Holyhead, yeah, 275 miles! I was sixth, Sid Barras won that one but I didn’t last that long in the UK. 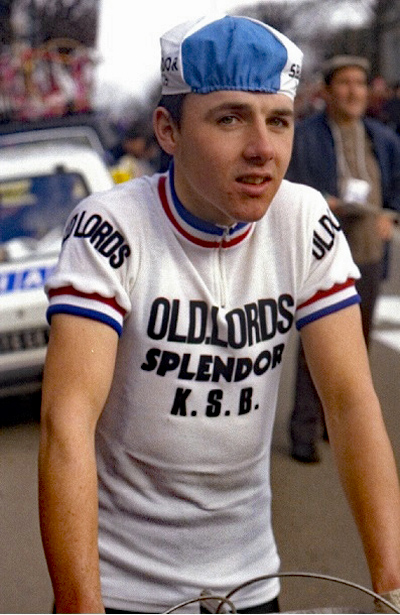 PEZ: You rode the Vuelta in ’78?
Yes, I signed with the Belgian Old Lords whisky – Splendor team; I found the race bible just the other day – I was the only English speaker in the race and as far as I’m aware I’m still the youngest Irishman to finish a Grand Tour. The race was in the spring back then and the weather was savage. I got off to a good start with 15th in the prologue behind Hinault in Gijon up in the North. Hinault won that one overall but it was a great experience, the little Spanish guys were cool, they used to call me, ‘bambino’. I rode the Classics too that year, the Tour of Flanders, Liege-Bastogne-Liege, the E3 – hard core races those were. Little me alongside them big Belgian guys over the cobbles! After the Vuelta we went to the Tour of Aragon then back to Belgium and into those 150 kilometre pro kermises – those were hard too, always with cobbles. It was tough, they had me riding them what seemed like seven days each week. The team had some good guys in there, even though they were knocking on a bit – Roger Swerts had been Merckx’s right hand man and Ferdi Bracke had been World Professional Pursuit Champion, World hour record holder and had won the Vuelta. 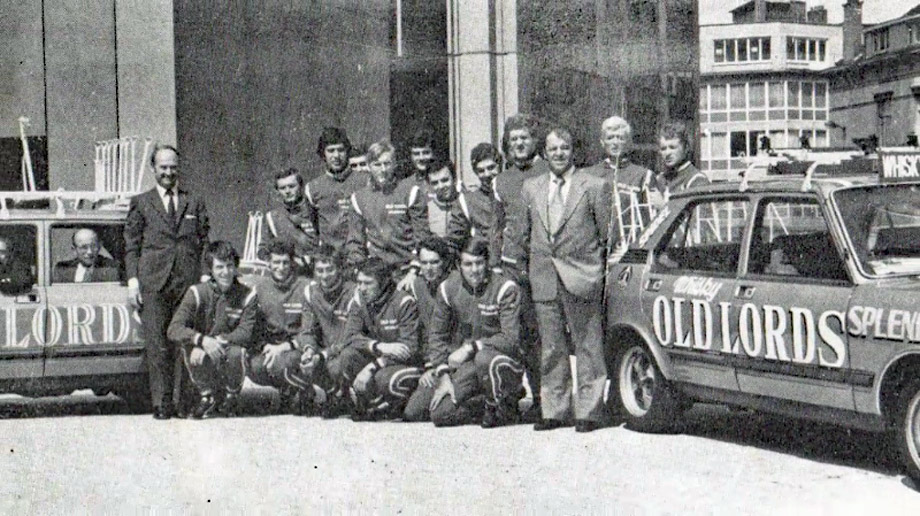 PEZ: Just one season with them?
The original host family I stayed with over there drove me nuts so I moved in to a flat above the café my DS owned, that was much better but noisy – whilst there were folk my own age around there were also lots of loud, drunk Belgian guys. I used to ride the kermises and there would be these local guys you’d never heard of, maybe some of them ex-pros but they all had big motors and were so strong. There were a few English speakers around too – Ron Hayman the Canadian guy was there and Pat McQuaid would come over. But really, the lifestyle didn’t suit me and I went home to Ireland.

PEZ: In ’79 and ’80 you were back in Ireland winning stages in the Ireland’s main stage race, ‘The Ras’ and finishing on the GC podium.
Yes, I came home a bit disillusioned and started back working part time in a garage. It was a real struggle to get my amateur licence back; my dad and the McQuaid family had to pull a lot of strings for me, the Irish Cycling Federation weren’t helpful and there were those who wanted a ‘lifetime ban’ for me because I’d been racing over there in Europe as a professional. Sean Kelly and Stephen Roche were in the limelight back then and folks used to say to me; ‘why aren’t you still over there like those guys are?’ They didn’t have a clue what it was like to live and race in Belgium. 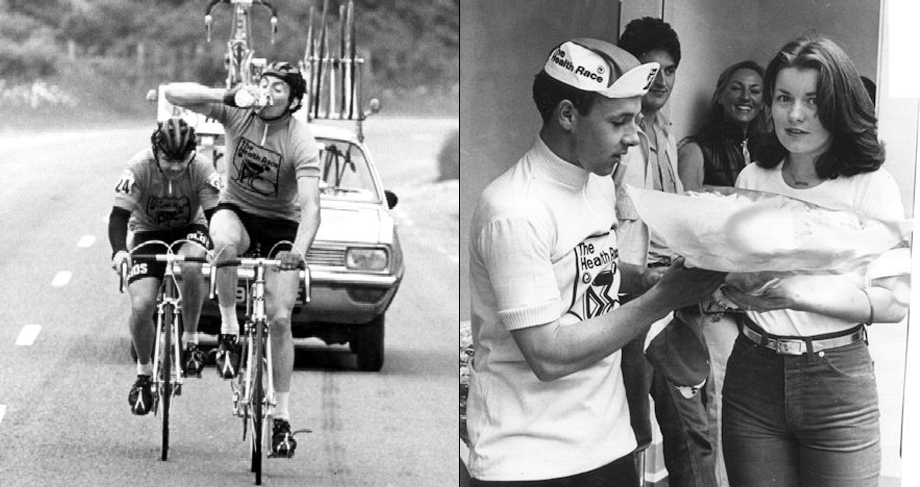 PEZ: Your American Adventure began in 1981?
The year before actually, 1980. The McQuaids were well connected and got an invite from the Mayor of Chicago to race over there, I went over with guys like Billy Kerr and Sammy McIlroy. The other guys got a bit of a hard time but I had developed a big motor with my time in Belgium and was up there chasing primes; I finished second and won $1,000. But those US boys were no slouches in their home turf – and as a bonus there were a lot of hot chicks around those races too. A guy offered me $200 dollars/month to race for him so I stayed when the other lads went home. I was riding the ‘crit scene’ – New York City, the ‘Twilight Crit’ in Athens Georgia and winning primes. It was hard against the combines though, usually the Aussies with riders like Danny Clark and there was the Canadian guy, Hugh Walton; they’d be the guys – I quickly decided that I had to get into those combines so even if I wasn’t on a good day I’d be taking money home. 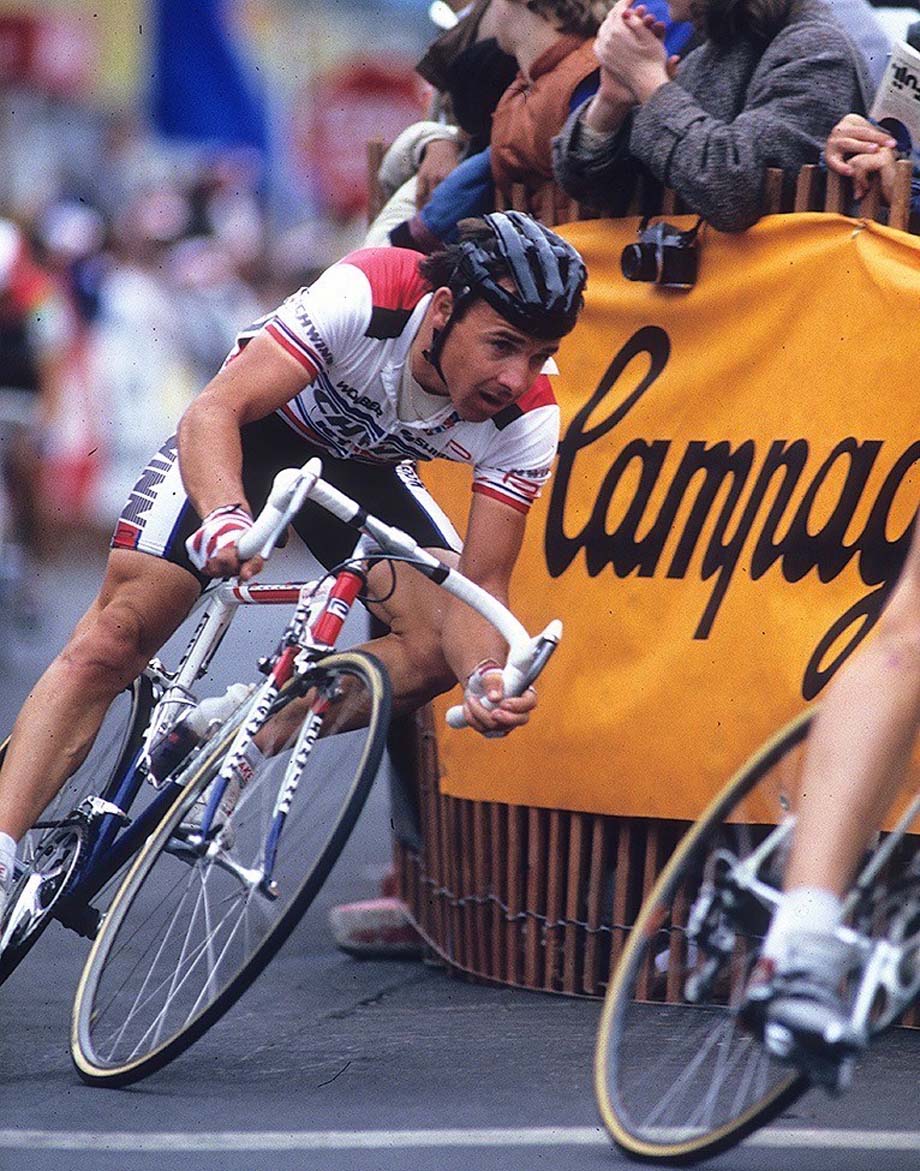 In the US with Schwinn

PEZ: Those seasons you were shuttling between Ireland and the USA?
I’d work as a mechanic in Ireland in the winter and race in Ireland and the US in the summer – but one year I stayed in Allentown, Pennsylvania over the winter and just could not believe how cold it was. Paul Pearson, the US guys who won the US PRO Champs in ’84 and I used to travel around the circuit together. Back then you could phone up the organisers, in places like Baltimore and negotiate start money and a hotel room – could you imagine that happening now? 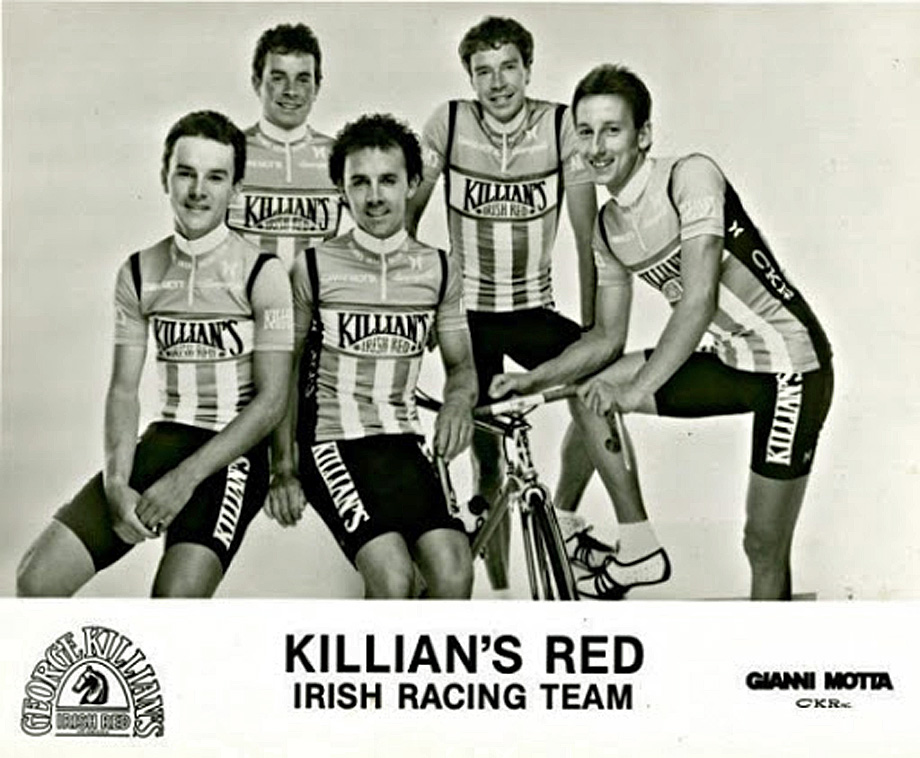 PEZ: And you rode the Tour de l’Avenir in ’83?
Yeah, Jack Simes organised a composite team, I rode with Jock Boyer, who won a stage and Alexi Grewal who also won a stage. East Germany’s Olaf Ludwig won overall, he had Bernd Drogan and Uwe Raab in his team, strong guys – I got two fourth places on stages but crashed out. The accommodation on that race was terrible, dormitories and rooms in convents; I was used to those nice hotels and motels in the USA! 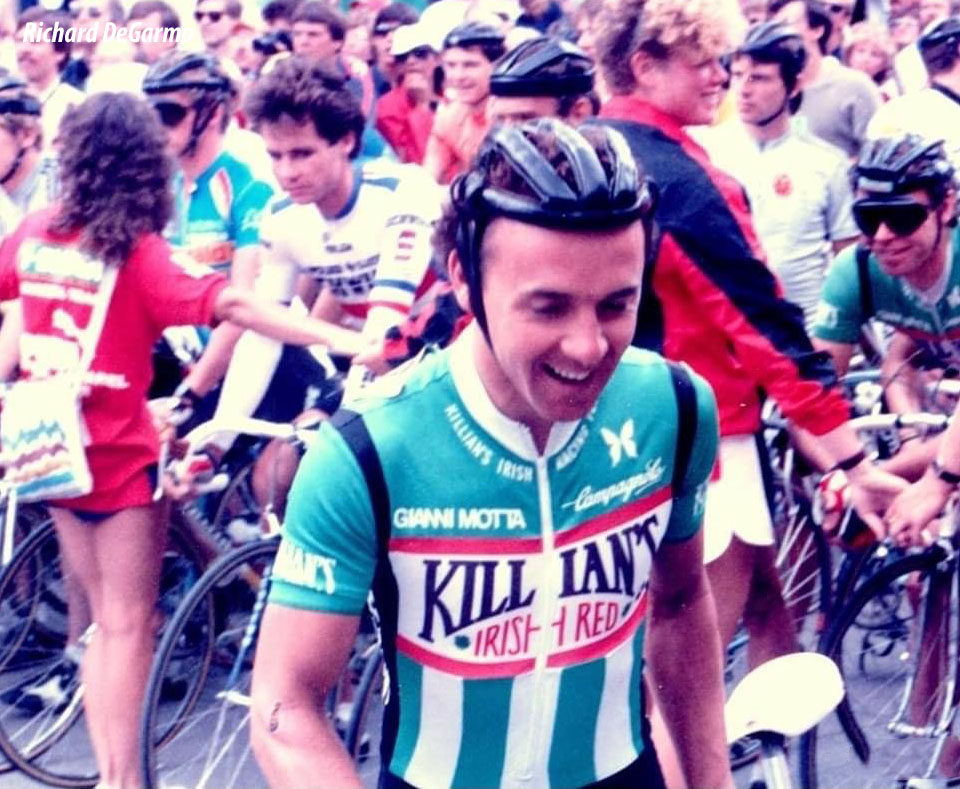 # In part two Alan tells us about his full-time commitment to racing in the USA, becoming a ‘Crit King’ and riding the Worlds at Montello. # 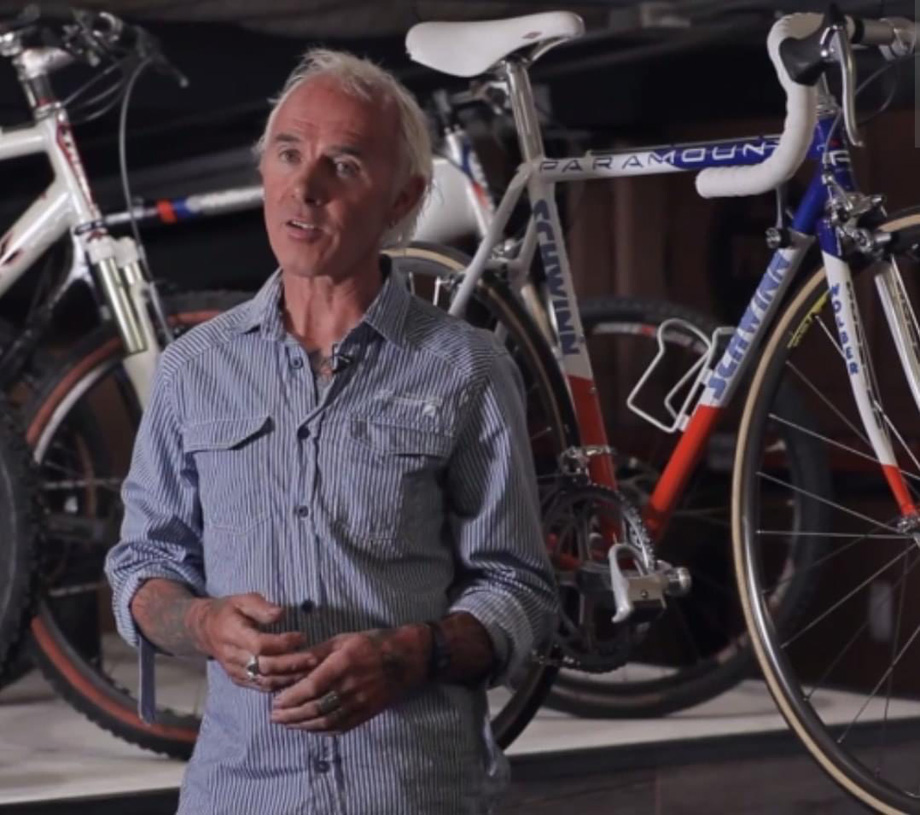 A big thank you to Mr. Mike Engleman who connected us with Alan and to Austin Walsh of Quay Cycles, Drogheda, Ireland who supplied us with some fine pictures.

Alan McCormack: An Irishman in the US Part 2