Alan McCormack: An Irishman in the US Part 2

Rider Interview: In part one of our interview with former Irish Champion, Alan McCormack we covered his junior days, his seasons as a pro in the UK with Carlton-Weinmann and in Belgium with Old Lords-Splendor, and now in part two his introduction to the 80’s US scene. 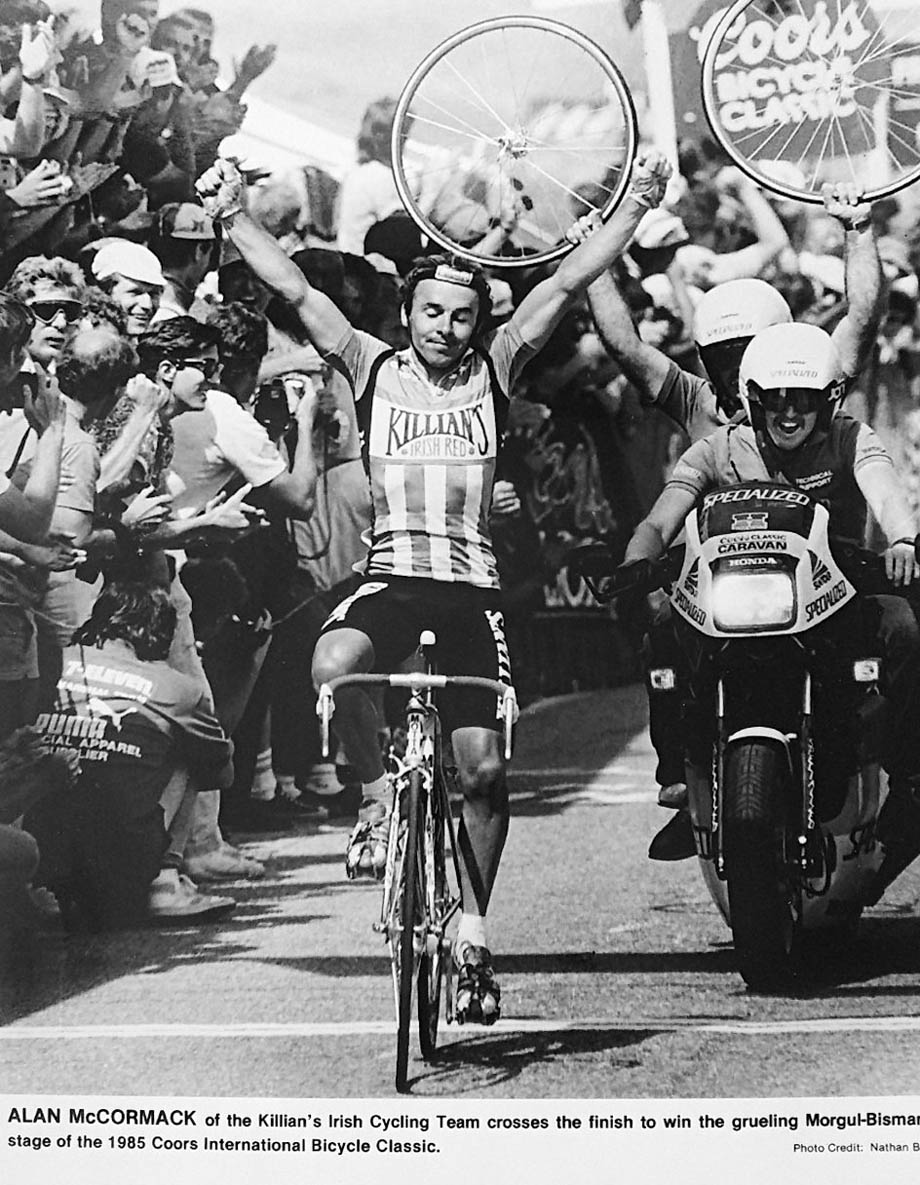 By seasons ‘83 and ‘84 he was a fixture on the US race scene and among other successes he won five stages in the Coors Classic, the biggest stage race in the USA with some 16 stages the year McCormack won the notoriously tough Morgul-Bismarck stage in 1985. 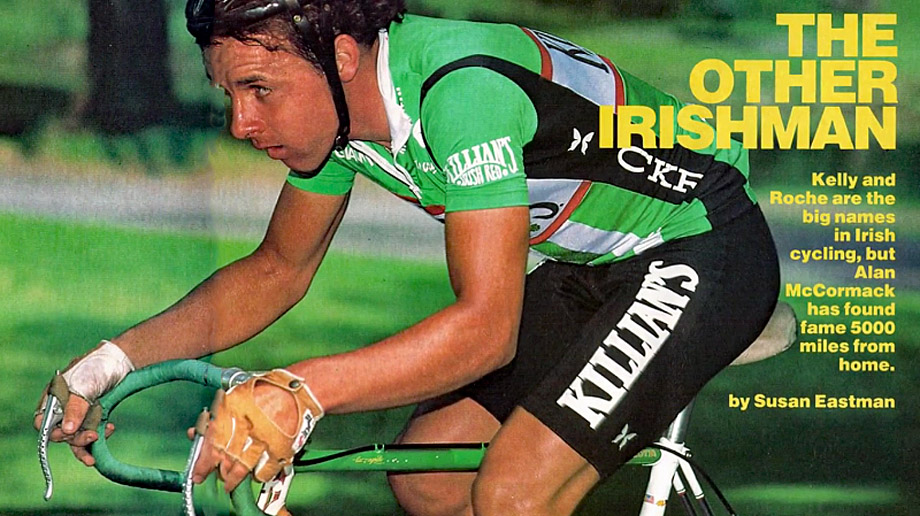 Written about as ‘The Other Irishman’

PEZ: You rode for the Killians team for four seasons from ’83 onwards?
Alan McCormack: Coors were launching this new beer, ‘Killians Irish Red’ so as a promotional vehicle they launched a team, initially just me but then it went up to five riders with all of us Irish to start with, then a couple of American guys joined us. That team had an annual budget of $250,000 which was a lot of money back then.

PEZ: You rode the Worlds in ’85.
That was at Giavera di Montello in Northern Italy over 265 kilometres; I attacked on lap 12, Jens Veggerby (Denmark), Johan van Der Velde (The Netherlands), Emanuele Bombini (Italy) and Dominique Arnaud (France) came with me and Tommy Prim (Denmark) bridged up, we were away for four laps but the distance told on me. I finished though, in a group with Andy Hampsten who went on to win the Giro. My mother and father there so it was pretty special. 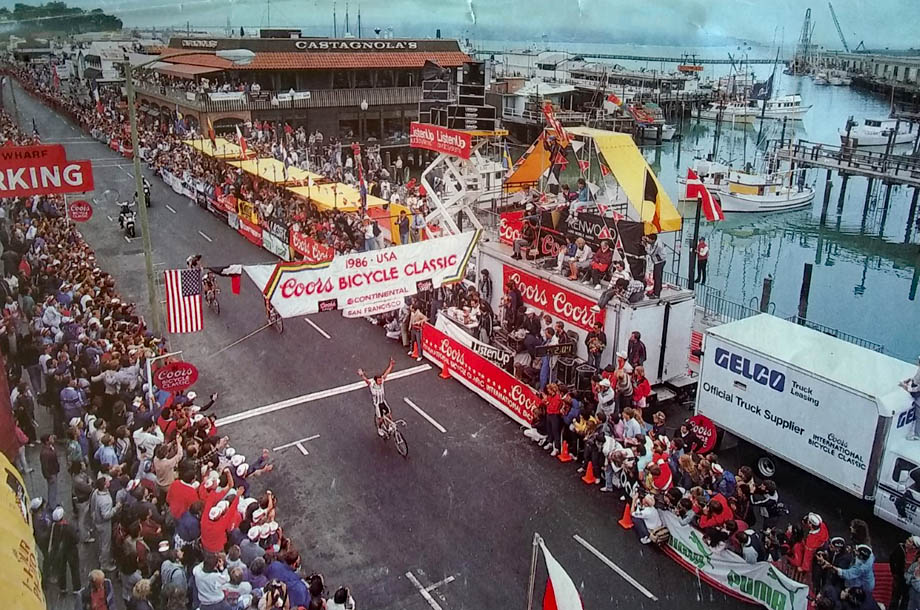 PEZ: You moved to Ten Speed/Schwinn for ’87?
Coors decided to put their money into NASCAR racing and the team folded. It was a shame because the team had momentum and was well known, we always tried to make the races we were in exciting. Ten Speed was an import/export business and Schwinn the well-known US bicycle company, they sponsored me through into ’88.

PEZ: You were best known as a ‘crit King’ but were sixth on GC in the Coors Classic in ’87.
Raul Alcala (7-Eleven and Mexico) won that one, 7-Eleven were first, second with Jeff Pierce – he was a tough guy – third with Hampsten and fourth with Ron Kiefel. I took a stage that year too, one the year before, one in ’85 and two in ’88. Davis Phinney won it overall in ’88 but he had three teams working for him – it’s hard to beat 18 guys! 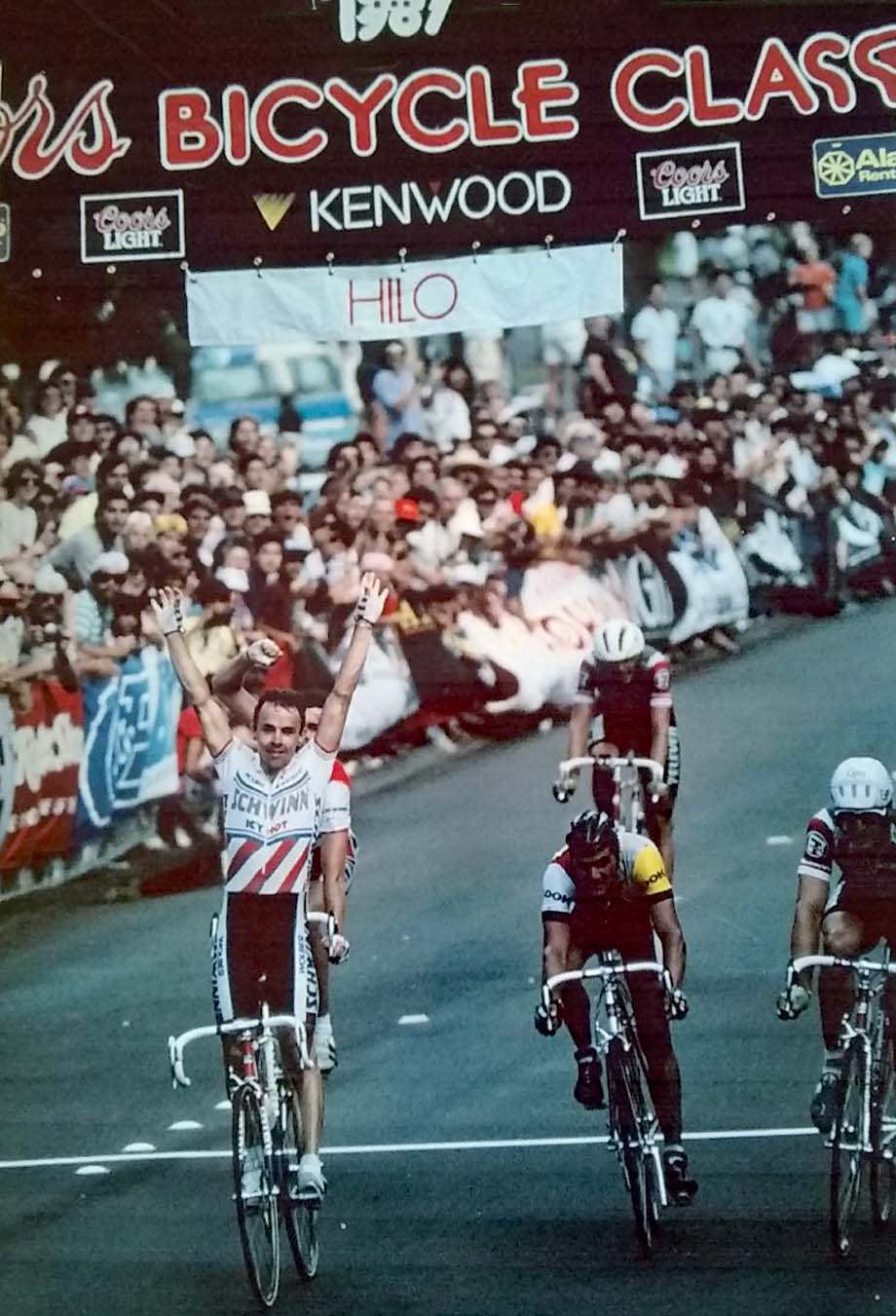 PEZ: What was the Schwinn team like.
Yeah, good, they brought over Michel Vaarten from Belgium who was an Olympic silver medallist in the Kilometre World Keirin Champion in ’86. Then there were two German guys, Roland Gunther who was a six day rider in the winter and Volker Diehl who was also a six day guy and German Champion on the track. It was a good time for me, I had a house, was driving a Mercedes and no allusions about going to Europe to race. In ’88 the co-sponsor was Wheaties breakfast cereal; our picture was on the box, I used to say to folk; ‘look, that’s me there on the box!’

PEZ: Then ADR W-Cup Bottechia Coors Light for ’89 – with Lemond and all the rest?
Yes, I was on a decent salary and spent a month at the training camp in Santa Rosa, California with him; of course I didn’t ride the Euro programme. 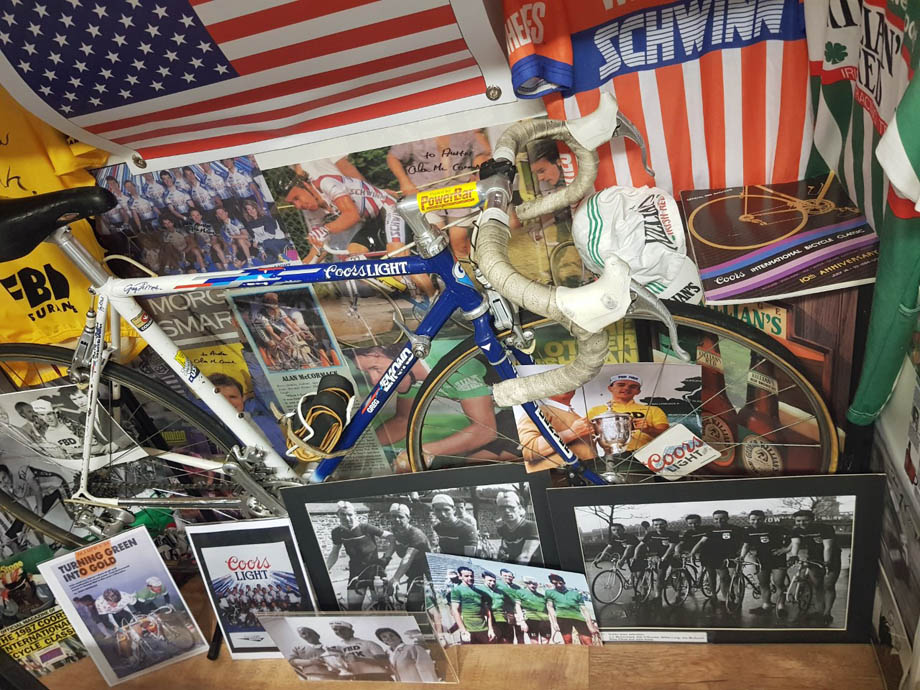 PEZ: That year and ’90 when the team was just ‘Coors Light’ you were notching up the crit wins.
It was a strong team, we had guys like Alexi Grewal and Roberto Gaggioli who was a prolific winner and I had good results too; wins in places like Atlanta, Denver, Salem, Salina, Vail. . . I had a house and two kids by then so had more responsibilities.

PEZ: You rode for Ritchey in ’91.
Yes, Tom Ritchey gave me two bike and got me to races but because I’m so small it was always difficult to get people to build me frames the way I wanted them to with a short top tube and tight clearances, I needed a 50 cm. top tube but often they’d build them too long for me.

PEZ: You dropped off the radar ‘92/’93?
I was persuaded to join the ‘real world’ and sold coffee in Boulder Colorado, I did well at it but was miserable all the time. I used to go out with the guys on the weekend and still hold my own. 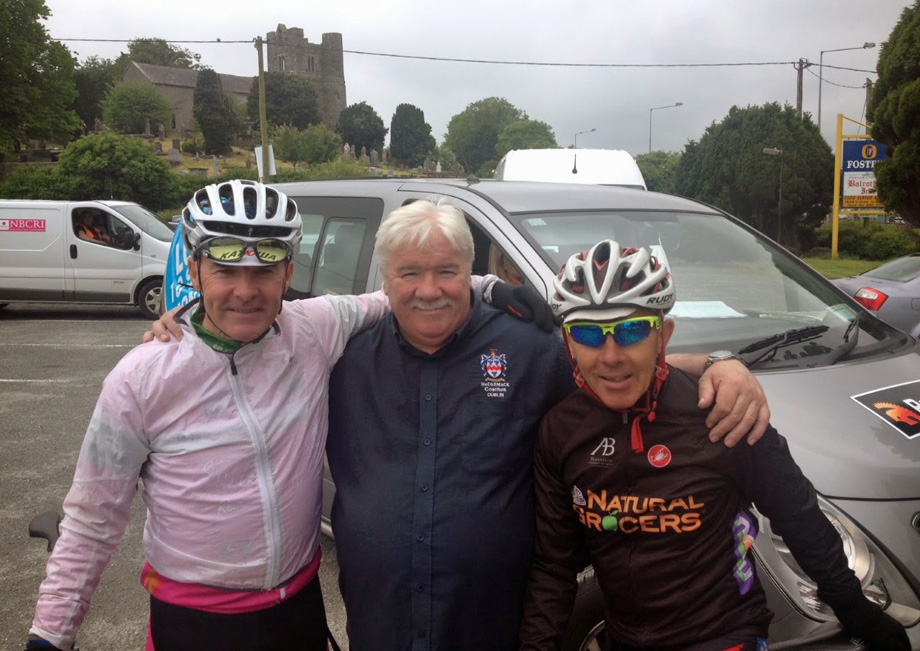 PEZ: You were back in the saddle with Klein in ’94?
Those were sweet bikes, over-size tubes, tight clearances, straight forks, rigid. The only thing was that the rear fork ends opened rearwards like a track bike but once the mechanics got used to that it wasn’t so difficult to change a wheel. The team folded but my friend, Steve Speaks contacted me and told me he was putting together a pure criterium team sponsored by the health food company, Guiltless Gourmet. My role was to lead out Roberto Gaggioli, we had a great time; the Motley Cru of cycling with Gaggioli winning something like 37 races in ‘95 – my role was to lead him out. I had ’95 and ’96 with the team before it folded, I raced locally for a bit before calling a halt. 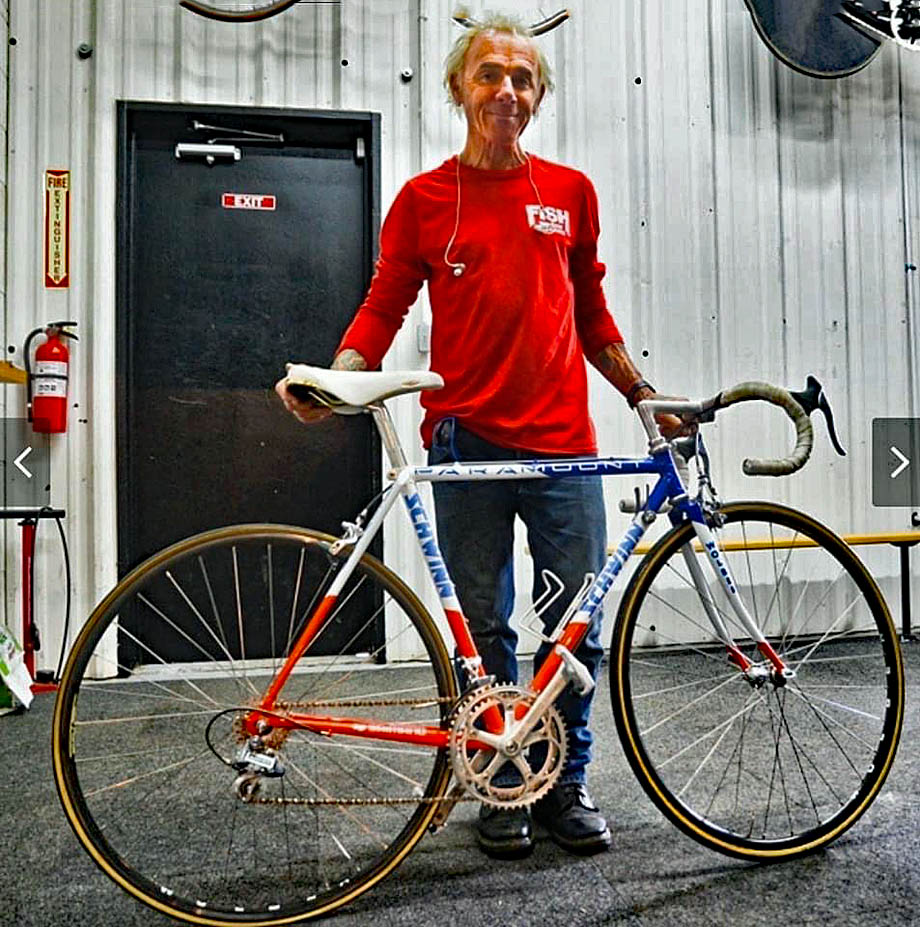 The Schwinn that took him to many victories

PEZ: What do you do now?
I work for a window cleaning company, my boss is flexible; as long as the work gets done I can get out on my bike most days – I try to get out consistently, it’s good for the mind. I’m an American citizen and live in Boulder, Colorado; there’s a good cycling scene here with the ‘Worlds’ on a Tuesday night. And 300 days of sunshine each year. 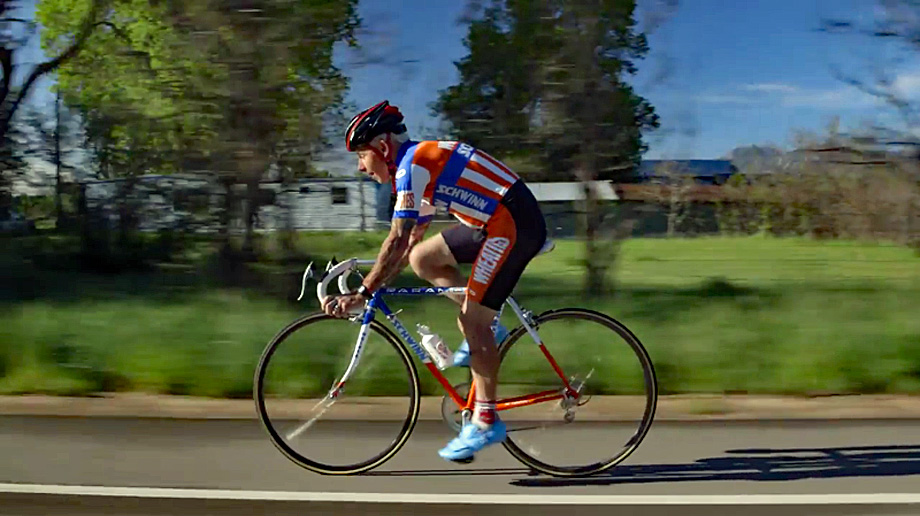 PEZ: Regrets?
No, except I wish I had come to the US sooner; the mid-80’s were a boom time for the crits here. I feel like I’ve had three different lives, my early days in Ireland, then my time with Old Lords in Europe and my life here. Life is good here, no regrets. 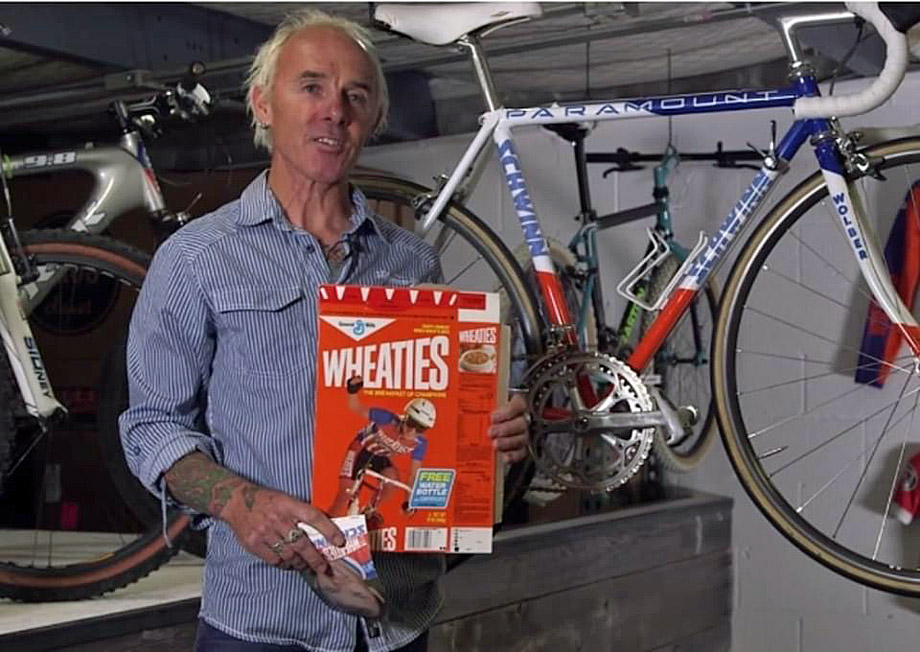 A big thank you to Mr. Mike Engleman who connected us with Alan and to Austin Walsh of Quay Cycles, Drogheda, Ireland who supplied us with some fine pictures.

Alan McCormack: An Irishman in the US Part 1