Hot off the keyboard – another pro interview from Vegas! So there I am, milling around the Pinarello booth, just met Fausto Pinarello and I’m thinking “he’s pretty cool…”, when top PEZ-fan Ed K. tells me that Alessandro P. is about to arrive. I smelled an interview just around the corner… 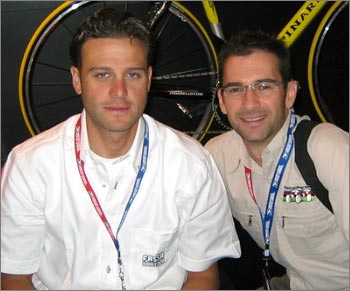 Look! Look! I’m getting my picture taken with Alessandro!

It takes a little getting used to seeing te pros in street clothes, and if you’ve ever seen th eItalians, you might think they’ve got night jobs as male-models. These cats can style it up like nobody… Alessandro was calmly and pleasantly signing posters for adoring fans, while his lovely – “fidanzata” (that’s girlfriend) Anna-Chiara was calmly and pleasantly watching Alessandro. (She’s definitely distracting, and looks like her job could be Top-model.)

He’s got the look of a guy on the way up – he looks me straight in the eye when we talk, and he appreciates my simple Italian – which puts some constraints on what I can ask – but I press on… 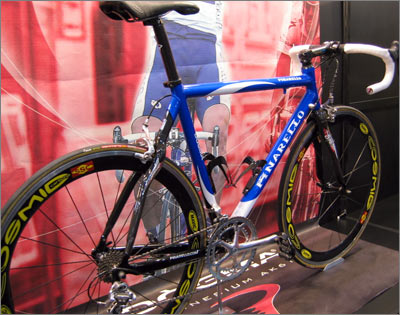 Apparently there’s a standard Italian-star reply – Simoni said the same thing – so here’s what I got:

Petacchi does not likes Las Vegas, says it’s “particulare”, and does not gamble because it’s too easy to lose. He’s in America for a couple of weeks, and will visit the Grand Canyon after the show for some sight-seeing. 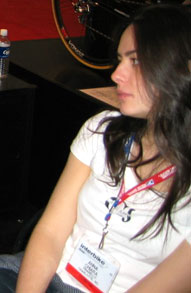 This winter he’s heading to Antigua to chill with Anna-Chiara (that’s her in the pic). On that subject, I ask how long they’ve been together – it’s 10 months. Being married to an Italian woman myself, I have some knowledge of the dating rituals required to land one these passionate hotties. Usually you’ve got to date in secret for a while, then when the time is right, (ie: things are serious) you get to meet the parents. This is a sure sign that you’re “in”.

It turns out Alessandro has met Anna-Chiara’s mother, but not her father. Hmmm. Based on my own experience, I surmise that Anna-Chiara is closer to her mother, and mom has been sworn to secrecy about Alessandro, but that she loves, respects and adores her father as only Italian women can. I expect a meeting between the two men around Christmas time this year.

And finally, I can tell you that Alessandro loves eating gnocchi with ragu sauce.

And there you go…

Thanks to Fausto Pinarello for arranging the interview. Check out the Pinarello website at www.pinarello.com