Doug Shapiro wasn’t the first American to ride the Tour; that was Jonathan Boyer; or the second, that was Greg Lemond. But he was the third to do so; and not just in any old role – as a domestique for Tour, Vuelta and Worlds winner, Joop Zoetemelk as part of the mighty Kwantum Hallen team. Here at PEZ we thought that he must have a good tale to tell; we caught up with him in Colorado, between Christmas and New Year.

PEZ: How did it all start, Doug?
Doug Shapiro: I grew up just outside New York City and played soccer – like most kids.

When I was 13, during the off season our coach suggested that we do another sport to keep fit.

There was a German language professor in the school who ran a cycling club, so I joined it and we went to see a race, I was like – Wow! I want to do this!

The next week I rode the race and won it.

PEZ: You turned pro with Steve Bauer for Fred Mengoni in ’84?
DS: Even though Steve Bauer was Canadian we grew up together – I first met him at the Tour de Abitibi which is a big junior stage race in Canada and we became friends.

Steve and I were tired of the ‘same old, same old’ in the States and wanted to go to Europe after the ’84 LA Olympics; Fred Mengoni agreed to sponsor us – he was a good guy.

PEZ: And you won the Coors Classic in ’84?
DS: That was probably my biggest achievement. Many of the riders who rode the LA Olympics were there and the likes of 7-eleven were riding, too.

There was a guy called Bob [Eucher*] there, he was a talent scout for Kwantum and he saw my performance.

That lead to a ride with a composite team in the Olympia Tour of Holland where I went well – and the Kwantum contract came from there. 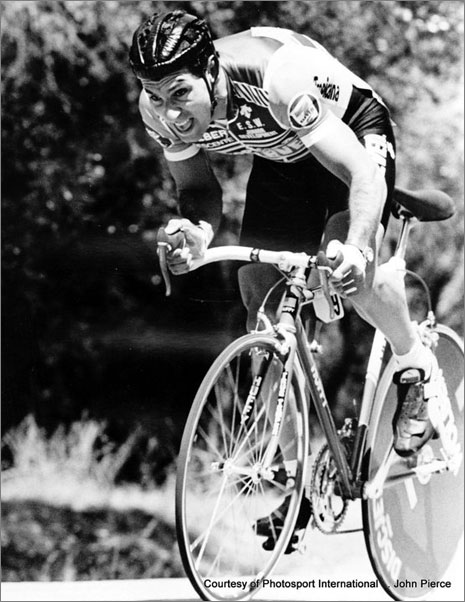 PEZ: Was the mighty Jan Raas still riding?
DS: He started the season as a rider but a few weeks before Milan – Sanremo he decided to move across to management.

Jan Raas and Joop Zoetemelk were my idols, I had pictures of those guys on my wall when I was a kid – and there I was, riding with them.

I learned a lot from Jan Raas about bike racing and about life in general – I still apply things in my life which he taught me.

PEZ: You started well, fifth in Kuurne-Brussels-Kuurne.
DS: I didn’t live to far from the course and those roads were where me, Phil Anderson, Greg Lemond and Steve Bauer used to train – it was like my home town race.

The team were pleased with my ride but the early season wasn’t the best time for me, I struggled with the cold weather and was sick a lot.

PEZ: What was your job for Joop?
DS: To support him in every way possible, I was his assigned domestique.

Keep him out of the wind, bring him food and drink from the car, keep him at the front coming in to climbs – in spite of doing all that I finished in 74th place which wasn’t a bad ride for a domestique.

Joop didn’t speak English and my ‘Nederlands’ wasn’t the best; but most of the rest of the team spoke English.

I found that I got stronger and stronger as the race went on – it was very rewarding for me.

PEZ: Ludo Peeters, the ‘pro’s pro’ was on the team too.
DS: Ludo was some good rider, we didn’t talk that much with each other but he was a carefree, smiley guy who you could always count on, no matter what.

The other guy who impressed me was Cees Priem – he was a real animal, so strong.

PEZ: Just one year at Kwantum.
Doug: I had an option for a second year but 7-eleven approached me; they wanted to ride the Tour and offered me a better deal than I had with Kwantum – so it all came down to money, at the end of the day.

PEZ: You roomed with Alexi Grewal at 7-eleven, that must have been an experience?
DS: ‘Experience’ – that’s an understatement!

I’d known Alexi for a long time – he’s a guy with a really good heart but he had a very different way of looking at the world.

But as Colorado guys we got along fine.

PEZ: Kwantum to 7-eleven in the Tour, very different cultures.
DS: Actually I was at a 7-eleven 20 year reunion just a few weeks ago; I think that Jim Ochowicz did a good job on the guys he got together – but it was a band of guys kinda pulled together.

Alex Steida grabbed the yellow jersey for us with his breakaway and time bonuses on the first stage, which took place in the morning – and then there was a team time trial in afternoon.

The year previous I’d been in the Kwantum team and we finished second in that discipline, so I’d experienced it at the top level and knew what a top pro team could achieve.

It was a shock to go from that to riding in what was like a mediocre amateur team, on that day.

In 7-eleven it was very American, everyone thought that they were the leader, at Kwantum everyone knew exactly what their job was – the roles were clearly defined.

The team fell apart, Steida had cramps, Alexi had good legs and didn’t want to wait for him, ‘I don’t want to get excluded on the time cut’ was his point of view – I remember throwing a bottle at him and telling him he couldn’t leave the yellow jersey.

Unfortunately there was an intestinal flu doing the rounds of the peloton; Greg Lemond had it worse than anyone, he couldn’t control his bowels and was in a real mess.

I contracted it too and eventually had to quit around three quarters of the way through, I was just so weak that I couldn’t continue – it wasn’t a great experience.

PEZ: Why leave 7-eleven and go to the Coors team?
DS: My career was winding down and I wanted to run my own team – the Coors Classic race had been going for 10 years and was coming to an end so I pitched them about starting a cycling team.

I did a full professional presentation and they were very impressed; we spoke about doing ‘fun rides’ the day before races in areas which were good for Coors – that type of thing, to promote the brand.

They said they were ‘in’ but had actually been talking to Len Pettyjohn about the same thing; so the team went ahead with Len as manager and me as a rider/manager.

PEZ: Reunited with Alexi and ‘wild man,’ the late Michel Zanoli.
DS: Alexi and I were always friends, we shared a common thread – we weren’t adversaries.

Zanoli was a Dutchman so he felt a link with me because of my time with Kwantum – we communicated well.

Greg Oravetz was on the team, he was a guy with so much talent and I helped to cultivate that.

PEZ: You were still winning in ’89, why quit?
DS: I had some very bad accidents on the bike.

In 1987 I was out with Eric Heiden on the bike; we were on the way to the cyclo-cross Nationals, test riding some new tyres on the ride there.

I slipped, came down and broke my femur; Eric had just started at medical school and I might have died were it not for him being there.

Then in ’88 I was in the break of four at the Coors Classic in Reno and the four of us came down on a corner.

I was OK but as I got up, the bunch rode into me at full tilt.

I was in a wheelchair, I couldn’t walk and my leg has never been the same since.

I came back in ’89 – my last race was in September of that year and I was second to Roberto Gaggioli.

PEZ: Are you still involved in the sport?
DS: Yeah, yeah, yeah!

Around 15 years ago there was a spell when cyclists seemed to getting hit by cars all over the place and an attorney who knew my background approached me to speak in court for his client – who had been involved in a collision with a car.

Then another attorney asked me if I’d do a similar thing for one of his clients – he said to me; ‘you’re good at this!’

Right there, I knew I’d found my calling – it’s a thing that’s very close to my heart.

When I was 15 I was out riding from Trexlertown track with a group and one of the guys, Michael Walters turned back.

He was hit by a car and was rendered quadriplegic in the collision – it affected me as kid and now I’m a crime scene investigator in situations where cyclists and cars have collided, my website is at www.bicycleexpertwitness.com

But I also keep in touch with guys like Chris Carmichael and Bob Roll and watch all the races.

PEZ: And will you be on Alexi’s ‘oldies’ team for Quiznos?
DS: Ha! No! I won’t! But he’s the kind of man who, if he puts his mind to it – well, nothing would surprise me!