The Dutch are pretty protective of their only classic – the Amstel Gold Race (the Amstel is Amsterdam’s river and Amstel Gold is a popular beer) – of the first 21 editions the home nation took 11 wins. Of the other 10 Amstels it took riders of the quality of Merckx, Maertens and Hinault to wrest the honours out of the Netherlands. But in 1987 it took three of Holland’s finest riders to stop a handsome, blond 25-year-old from Sheffield taking the honours across the North Sea to England.

Malcolm Elliot was riding for the small British ANC team and due to a combative performance in the 1986 Nissan Tour of Ireland he wasn’t an unknown quantity to some of the continentals who always take a mental note of a fast finisher. 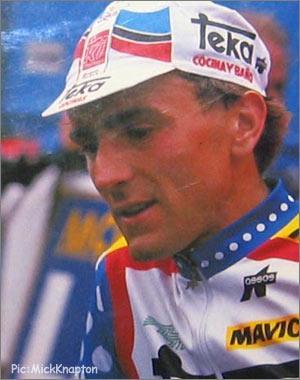 Malcolm Elliot at he 1989 Tour of Britain in his Team Teka colors.

The Amstel Gold takes place in South Limburg so it’s anything but flat, one ‘berg’ follows another so maybe it’s just as well Malcolm; ‘Don’t remember much about the race except for the last 20 or 30 kilometres, it was 19 years ago after all!’
He continues; ‘Coming on to the Cauberg climb in the closing stages there was a bit of a lull then Steven Rooks (PDM & Holland, twice Dutch pro champion and winner of the Amstel and Liege-Bastogne-Liege) and Teun Van Vliet (Panasonic & Holland, a winner of Het Volk and Gent-Wevelgem) went to the front, they didn’t put in a fierce attack, but they did up the tempo and began to open a gap, Joop Zoetemelk (Superconfex and Holland, 1980 Tour winner and 1985 World Champion) moved to get on to them, I tucked in behind him and we bridged-up.
I must have good legs because it didn’t feel like we were flying but we soon had a 30 second gap, Bruno Cornillet (Z-Peugeot & France, a winner of the Tour of Valencia and the Circuit de la Sarthe) came up and that made five of us up the road.

“It didn’t feel like we were riding our legs off, no one seemed fully committed but there were little jumps going in, we all kept rolling-through though to keep the momentum going. Zoetemelk went to the front – I think it was Rooks who was behind him – he just rode off the front, we all hesitated, looked at each other and the gap grew, five seconds, then ten, then 20 then it was too much for one rider to bridge on their own. 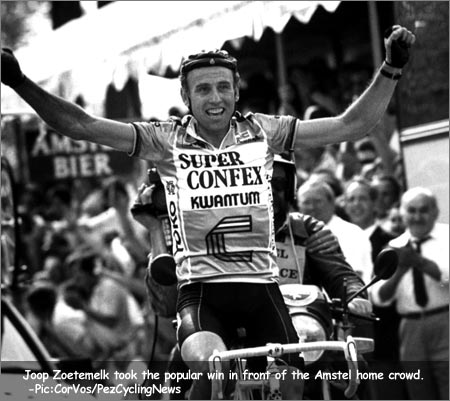 “I can’t remember why but I had it in my head that Van Vliet was the guy to watch because I thought that he had paid-off Rooks and Zoetemelk so I didn’t imagine it would be the race-winning move. Rooks took me by surprise and jumped away for second but I put ten lengths into Van Vliet to take third easily with Cornillet back in fifth.’

I asked if he was made a fuss of at the finish as an outsider grabbing a big result; ‘Not really, I don’t even remember there being a podium, all eyes were on Dutch hero Joop winning his home classic.’

I tell him that someone “in the know” once said to me that Elliot should have spoken to Rooks and suggested to him that he would hand-over some cash in exchange for a ‘straight’ sprint but as Malcolm says; ‘Hindsight is a great thing, I think it would have cost me a couple of years salary to get that deal, they all knew I could sprint, they had seen me at the Nissan in ‘86.

“After the race I was pretty happy with the ride but you can’t help but think about how things might have gone, I had hoped that Dutch rivalries might have come in to play and I could have benefited but it didn’t work out like that.

“Just last year though I heard that Rooks and Van Vliet had been arguing coming in to the finish that day, one of them had done the other a favour at Het Volk and wanted it repaid, but the other wouldn’t do it because the Amstel is such a big deal in Holland.’

Amstel Gold 2006: Out With The Pave, Into The Hills