An Amazing Comeback For 2009: Chad Gerlach!

Much has been made about 2009 being ‘The Year of the Comeback,’ but no one has a story quite like the returning Chad Gerlach. A recovering alcoholic and drug addict, Gerlach has signed a deal with the Amore&Vita-McDonald’s squad for 2009, and is back racing at an elite level for the first time since 2003. Once one of the top domestic racers in America, Chad hopes to return better than ever.

After the tragic murder of his best friend and the folding of his team in 2003, Chad fell into a ‘homeless, vagabond lifestyle’ as he describes it. Thus began a five year period in the Wilderness for Gerlach. It ended with a trip to rehab (following his appearance on the A&E television show, Intervention) and now the opportunity to race for the Amore e Vita team in 2009. PEZ was more than excited at the opportunity to talk to Chad and find out what really happened and what he hopes for this year and beyond.

PEZ: You’re still in Sacramento; did you ever consider a fresh start, somewhere else, Chad?
Chad: Yeah, I’m still here, I rent my own place and have a job selling sun glasses – I gotta pay the bills until I join the team!

I did my rehab in Florida and I’ve raced in, or travelled through every state in the US but I don’t think there’s a better place than California; plus it’s that ‘home town,’ thing. 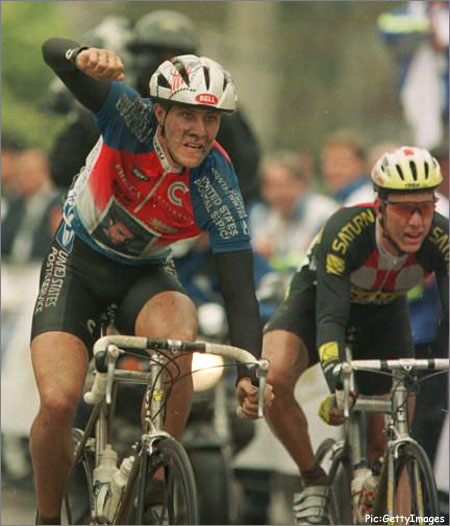 PEZ: Tell us a little about your career and palmares.
Chad: I started when I was 15 and won 40/45 races as a junior. I had a lot of success in the US as an amateur and a pro.

Probably my best year was ’96 with Postal; I won a stage of the Solidarity Tour in Poland and a stage in the Tour of China.

I won the King of the Mountains at Redlands and I won a stage at Killington – I had 12 wins that year.

I won stages in the Tours of Costa Rica, Panama and Guatemala – against Oscar Camenzind.

I won two stages in Langkawi in 1998; but most races here in the US are criteriums, which aren’t best suited to me.

When I didn’t get renewed, I was shattered – and that was on top of something which happened that wasn’t on any TV show about me.

My best friend and Sierra team mate, Ryan Smith moved to Sacramento, started dating this woman, then the ex-boyfriend came back and stabbed Ryan to death – I was in shock.

I actually had a team for 2003, but it folded and I’d just had enough; I was a good pro, on the face of it making good prize money, but I couldn’t pay the rent.

I’m back because I didn’t like the way it ended.

I think that my drug use has been blown out of all proportion; I just got stuck in a homeless, vagabond lifestyle.

I was happy to be done with cycling and I just partied – I was young, I was a party animal and I had my addictions.

Five years passed quickly, I was messed up, but right now, I’m back!

Roberto Gaggioli (Amore&Vita-McDonald’s US DS) wanted to do this with me two years ago, when he was with Monex, but he couldn’t find me.

I was depressed and not taking care of myself, I had girlfriends, I could have showered but I just didn’t care and stayed dirty – when the TV show happened I thought I’d come back and race just for fun, but then Roberto called me and offered me the slot.

I don’t think I’m too old, there are guys 37/38 still racing in Europe. I’m living for the months from March to the fall, when I’ll be racing with Amore&Vita-McDonald’s in Europe.

Despite smoking dope, I haven’t wasted my lungs, they’re fine – I feel like I’ve matured and I have a challenge to meet. I mean, I get up at 6.00 am to go training, in the past I just would never have done that. I used to look at folks that raced and were still at college and think; ‘how can they manage that?’

PEZ: You started as a US pro with Redlands in ’94, how does the scene compare today?
Chad: It’s not much different, the guys aren’t any stronger, but there seems to be fewer dollars around and teams have pulled out.

It goes in waves, good times, bad times – but there certainly seems to be less performance enhancing dugs around.

Everybody was on them in the mid 90’s; it’s ironic given that I used to do recreational drugs, even when I raced, but I never touched the performance enhancing shit.

My buddies and I would have a smoke (of dope) and then go on seven hour run in the mountains – it made us appreciate the scenery better!

PEZ: Six years off – tough to get back into it?
Chad: I feel good; I was out on a Thanksgiving ride and there was a kid there from Rock Racing, he’s a good climber and it was tough to stay with him on the hills, but I did and I knew right there and then that it won’t be long until I’m doing 200 kilometre runs and right back to where I was – maybe better.

My body feels good, even when I was at my best, I drank and I smoked; now I don’t drink, I don’t smoke and I’ve accepted that I have a disease – alcoholism.

I remember my managers getting pissed at me after races because I’d be chewing tobacco, I used to ignore them – but they were right, all that stuff is poison.

PEZ: Silly question, but after all those years, how hard was it to get a good position on the bike, again?
Chad: I gotta tell you, man – it was easy! I just went on how it felt; I can tell within a couple of millimetres what’s right for me, just on how I feel on the bike. 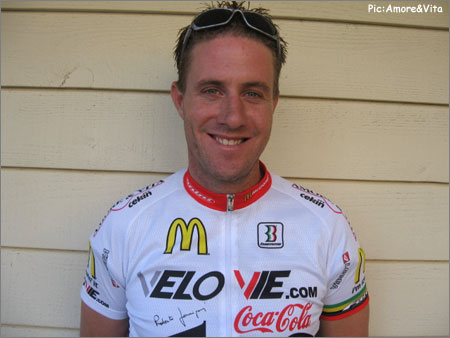 PEZ: Why Amore & Vita?
Chad: Roberto (Gaggioli) and I go way back and he wanted me because the team preaches a strong anti-drugs message; each year they take on a rider who’s had drug experiences and is trying to redeem himself.

I’m gonna win some races for him and above all, it’s a good story!

But I’ll tell you, I want this, I want to come back and win!

PEZ: What expectations does the team have of you?
Chad: There’s no pressure on me, the guys that made the TV show want to do another one with me once I’m racing; so that’ll be good publicity for the team.

I have to tell you though; I want to win the Nevada City Cycling Classic – that’s my goal.

PEZ: There’ll be a big age and life experience gap between you and some of your team mates?
Chad: The team was Polish registered last year so there are a few Polish guys in it; I’ve had Polish team mates before – Dariusz Baranowski was one, and I’ve raced in Poland, so there’s no problem there.

I’ve actually raced with most of the big names in US cycling – Hamilton, Moninger, Hampsten, so I hope guys will view it that I’m bringing a lot of experience to the team.

PEZ: Have you met the guys yet?
Chad: No, but you gotta remember that we’re a ragged bunch from all round the world!

PEZ: What are you most looking forward to?
Chad: Italy, in March and April because I know that’s where I’ll build the form for Philly and Sacramento – two of my big goals.

And I’m looking forward to being part of a professional set up.

PEZ: Did you miss the bike in the ‘lost’ years?
Chad: Of course; cycling was the only job that I’d ever done, I was totally unprepared for life outside of cycling.

When Ryan was murdered and I lost my ride, I slid into addiction and now I have to work hard at staying sober.

And the thing is, my addiction was drink, not drugs; I’ve been sober for six or seven months now and I’m proud of myself.

PEZ: You went through a few teams, back then.
Chad: I was rough around the edges, outspoken a ‘shit talker’ even. I let that over shadow my racing ability, I had no tact – I was maybe even an arrogant bastard! 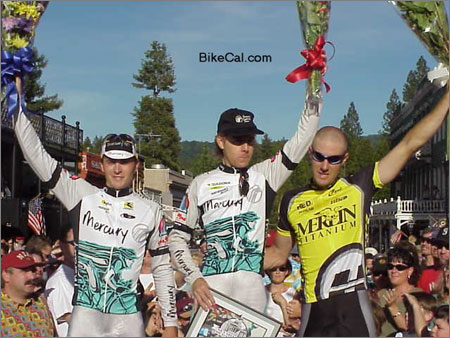 Chad on the third step of the podium with Scott Moninger and Dave Clinger.

PEZ: I read you were, ‘uncoachable.’
Chad: Yeah! I still don’t think you need to be coached, you either go harder than the rest or you don’t! My dad was my coach and when I look back, maybe he was too hard with me.

But it’s down to desire, if you’re over the last hill, there are five of you left and one guy goes up the road, you have to want that win to go after him.

I’m gonna deal with this in the book I’m writing – and would you believe that Oprah wants to see me succeed?

PEZ: I heard you hit Lance?
Chad: That was a long time ago, 1991 – but a reputation like that sticks and follows you around.

PEZ: Do you blame cycling at all for you decent into those ‘lost’ years?
Chad: There’s no room for blame or regret in professional sport, so the answer is ‘no.’

I made my decision, for whatever reason; maybe I was lazy, life was too easy, I was spoiled, my dad or girlfriends were always there to do things for me – all I had to do was ride my bike.

PEZ: You read PMA books now; so what are the positives from those bad years?
Chad: Even though my experiences on the street wouldn’t seem positive to most, I think I had to go and do it. I was just pissed off with all my decisions being made for me on the bike.

You have to focus on the positive, I’m humbled now and I don’t ever want to go back to that life. I got sober, I’m positive, I work hard – but maybe I had to let loose?

PEZ: Goals for 2009?
Chad: I want my return to be successful; I want to re-connect with the folks I care about and I want people to see that you can come back from addiction.

***
With thanks to Chad for his time and to Roberto Gaggioli for enablng the interview – and for giving Chad another chance.

We’ll be back in touch with Chad once the season starts.