Tour Mechanic Interview: Behind every top rider, there is a team of helpers and one of the tough jobs is the mechanic… especially 30 years ago before air conditioned trucks and half a dozen mechanics per team. Steve Taylor was on the 1987 Tour de France with the ANC team, Ed Hood heard his story. 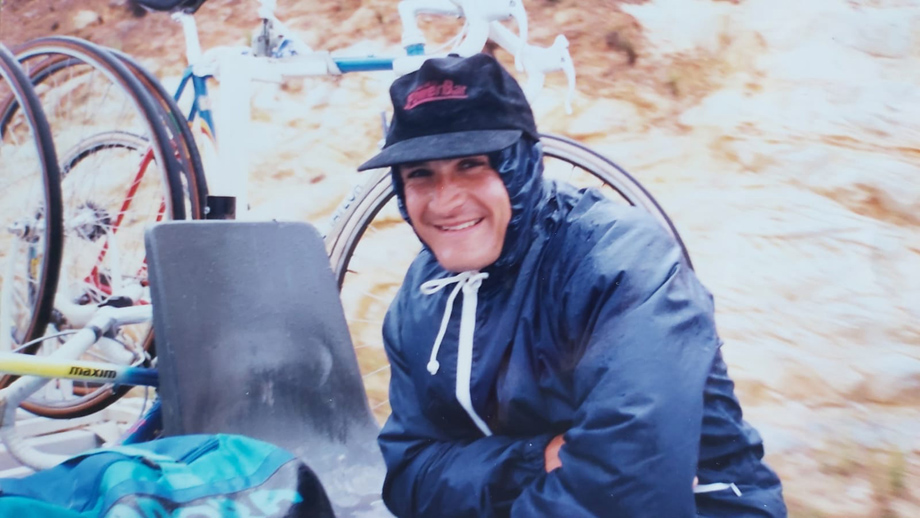 Not every day is fun!

The legend of the ANC team and participation in the 1987 Tour de France – the story continues. Our man in Shropshire, Martyn Frank said to us; ‘you should speak to Steve Taylor, he was a mechanic with ANC.’ No sooner said . . . .

PEZ: What’s your background, Steve?
Steve Taylor: I’ve been a bike mechanic since I was 15 years-old, I went to work at Witcomb Cycles then I spent 20 years at Harry Perry Cycles who sponsored the cyclo-cross star Steve Douce and VC Elan. I raced myself from when I was 13 years-old up until I was 21 years-old, I made the GB junior squad – then I discovered other things in life. . . 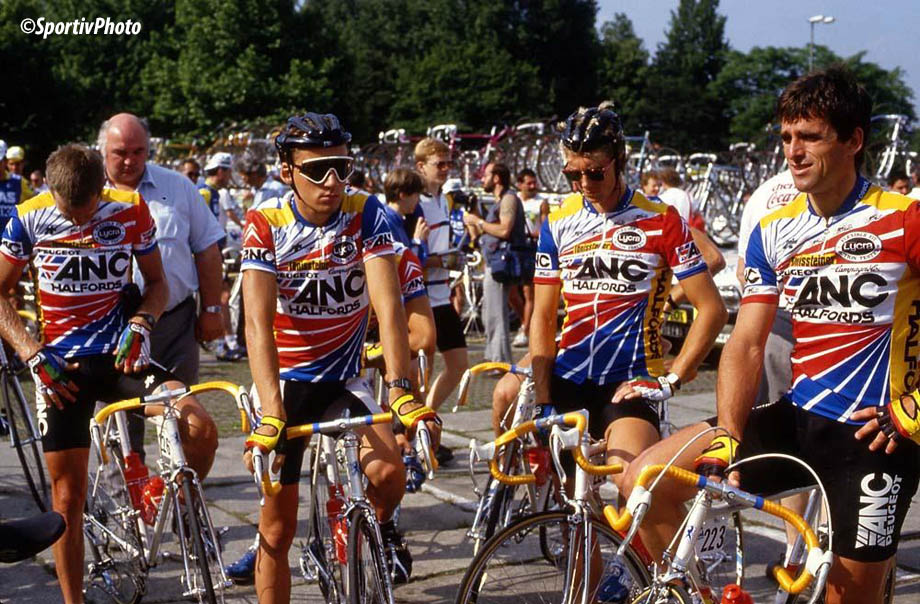 The ANC team at the Tour. Thanks to Phil O’Connor

PEZ: How did the connection come about with ANC?
I’d worked with GB teams under the stewardship of Alex Taylor but my connection with ANC began when I was down the pub one day. A race had just finished, down the road in Bexley and Tony James walked in, he was with one of the ANC teams at the time. We chatted and he took me down to meet ‘Griffo’ – Phil Griffiths, who was managing the team and we had a chat. Phil rang me at the shop in the week and the next thing I was at the Criterium International with Vern Hanaray who was looking after the team there – it all happened so quickly, bang! I did the Criterium International with ANC, the Tour of Seville with Alex Taylor then the Milk Race with ANC. 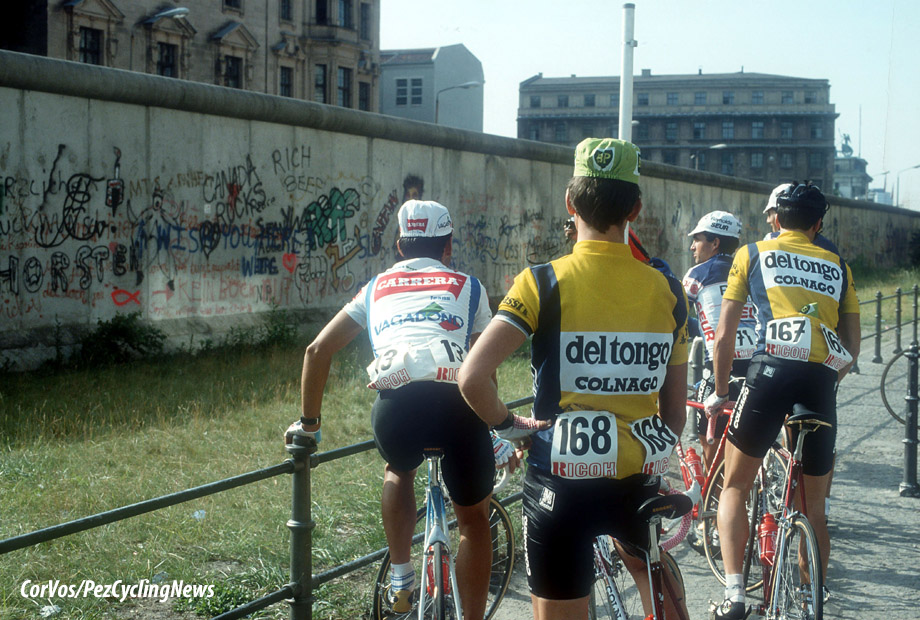 The riders had time to see the Berlin Wall

PEZ: And the ’87 Tour de France, where I believe you had to contend with equipment shortages?
It’s 33 years ago so my memories aren’t perhaps clearest but yes, I remember that we didn’t have enough disc rear wheels for everyone in the team to have one for the team time trial. Within a few days I was doubting that I’d make it to Paris, we lost Graham Jones, Paul Watson, Shane Sutton – and Steve Swart later; but Adrian Timmis, Malcolm Elliott, Palov Kvetoslav and Guy Gallopin all made it to the Champs Elysees. 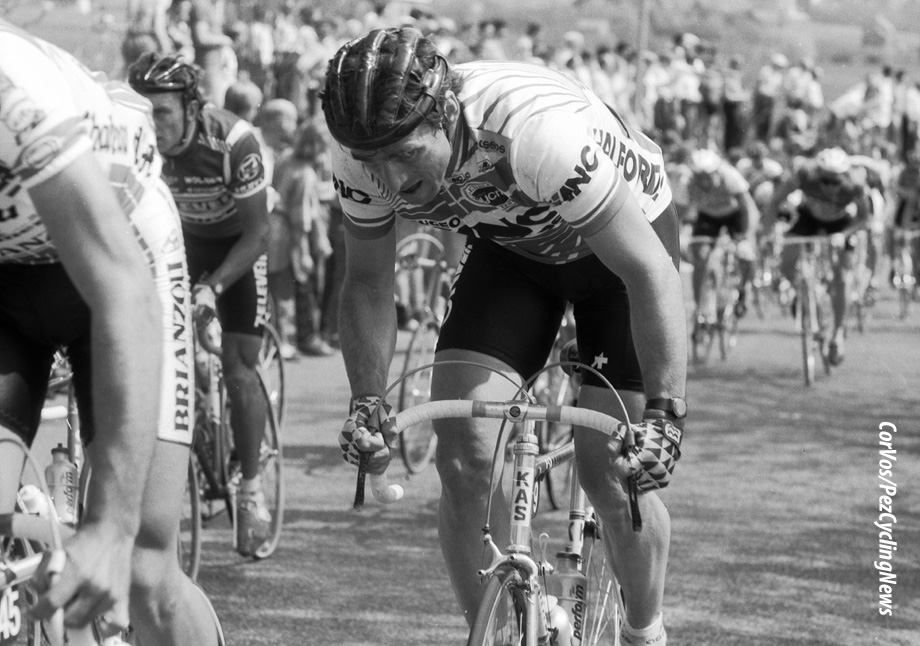 Guy Gallopin in Amstel Gold Race 1987 – Not on his Peugeot

PEZ: What were those Peugeots like?
They were fine, if you think about it bikes changed very little from the 60’s up until recently with the advent of carbon, electric gears and the aero thing. They were easy to work on, clips and straps, nothing complicated – clipless hadn’t come along yet. I was number two mechanic, Steve Snowling who was well known as a six day mechanic too, was the number one mechanic. 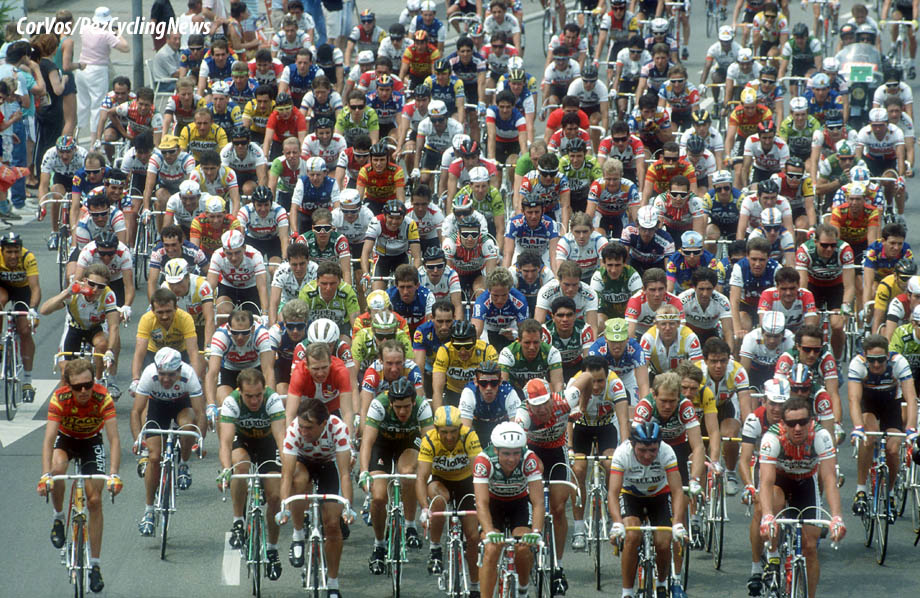 PEZ: Some folks don’t rate the Campagnolo C-Record groupsets on the team bikes?
I thought it was good equipment, no problems with it – it was simple, not even indexed shifting in those days. The only thing about the equipment was that we could have done with more of it! 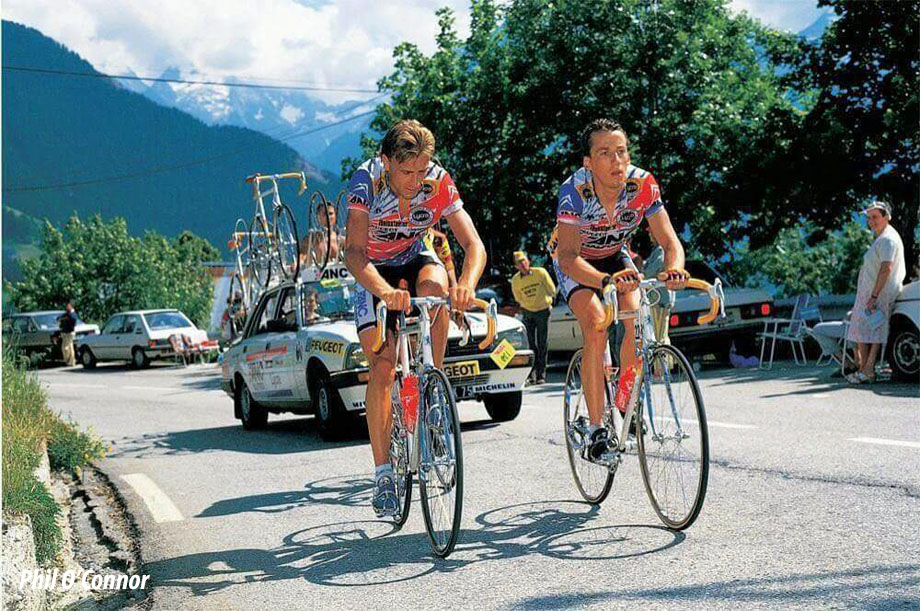 PEZ: Who was the ‘equipment fanatic’?
Malcolm! Everything had to be millimetre perfect, he was very fastidious. In the Milk Race we fitted some carbon superlight bottle cages to his bike, he took one look at them, pronounced them as rubbish, swiped at them and they exploded into bits. At the Tour stage start I made sure I had had my Campag cone spanner in my pocket because Malcolm always wanted his brakes centred perfectly. 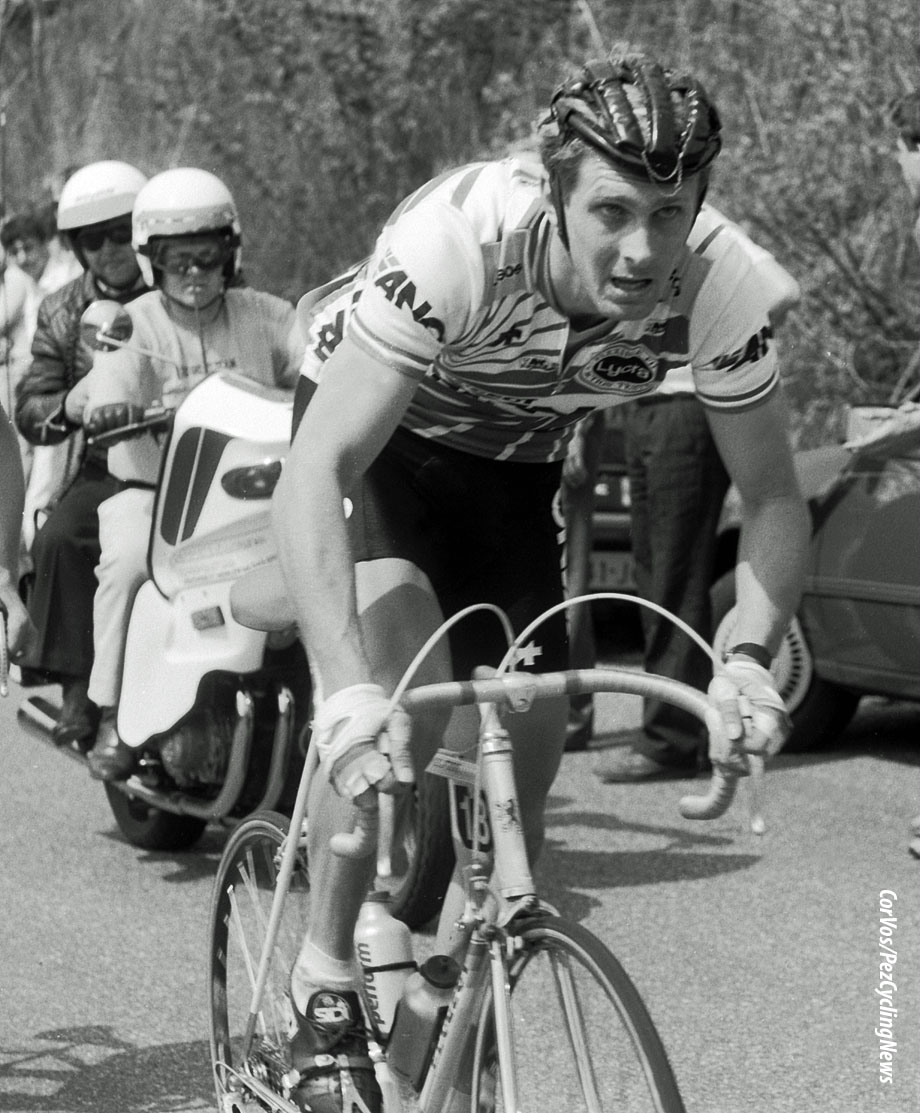 PEZ: And who ‘went with the flow’?
Paul Watson, he’d happily ride with a broken spoke with it lashing off the forks – he just didn’t bother.

PEZ: Was anyone ‘hard’ on equipment?
It’s all a long time ago but I think I recall Shane being quite hard on his equipment. 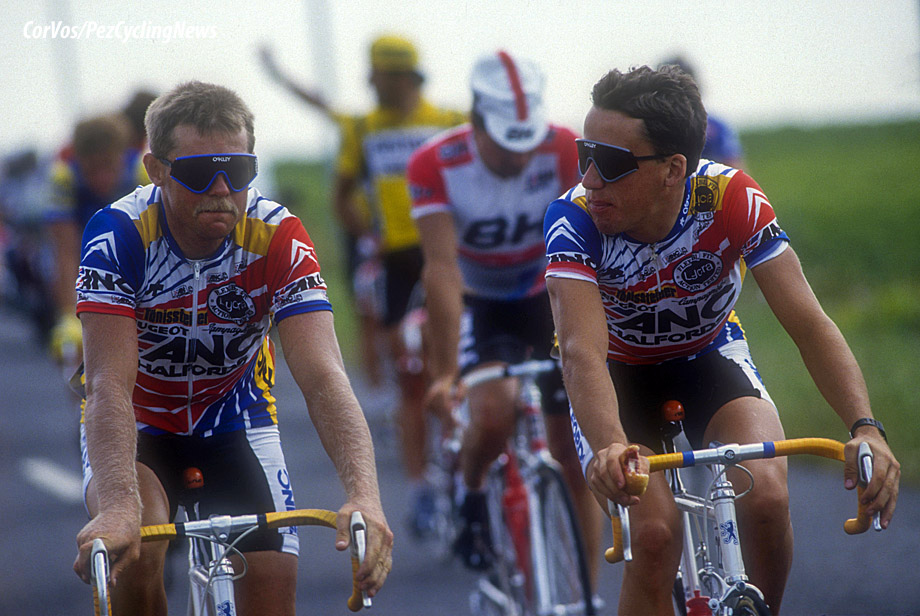 PEZ: Did you have many crashes to deal with?
We didn’t do too badly and apart from one stage we weren’t too badly hit by punctures either. But there was one stage on a really hot day where we were on this long decent, the rims were getting very hot under constant braking, that coupled with the weather meant there were tubulars exploding all over the place. You were burning your hands changing the wheels – because it was such mayhem all the teams were changing teams for whoever needed a replacement. I had been changing fronts so when big Guido Bontempi punctured I ran over with a front; but it was his back wheel – he was OK about it though. Steve and I took it in turn to be in the number one car – so you were only in the thick of it for half the race; we had perhaps two or three punctures each day. 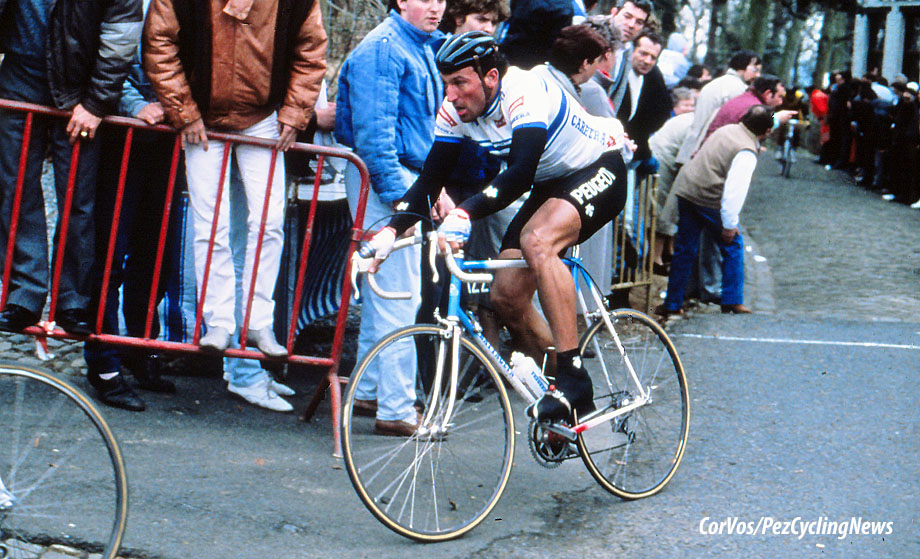 PEZ: What was your least favourite job?
Sticking tubulars on is the job you don’t want to do. But we always made sure we had rims and tyres prepped in the truck – the tyre already stretched with a couple of coats of rim cement on them and on the wheels. At the end of a long day it’s a job you don’t look forward to.

PEZ: What were your working conditions like?
It could be a dark dingy underground car park or some grubby area at the back of a hotel, or even just on the street where you really had to watch your bikes, wheels and tools with people all around you. The worst was at La Plagne, out in the cold, wind and rain and just wanting to get the job done and finish up for the night. 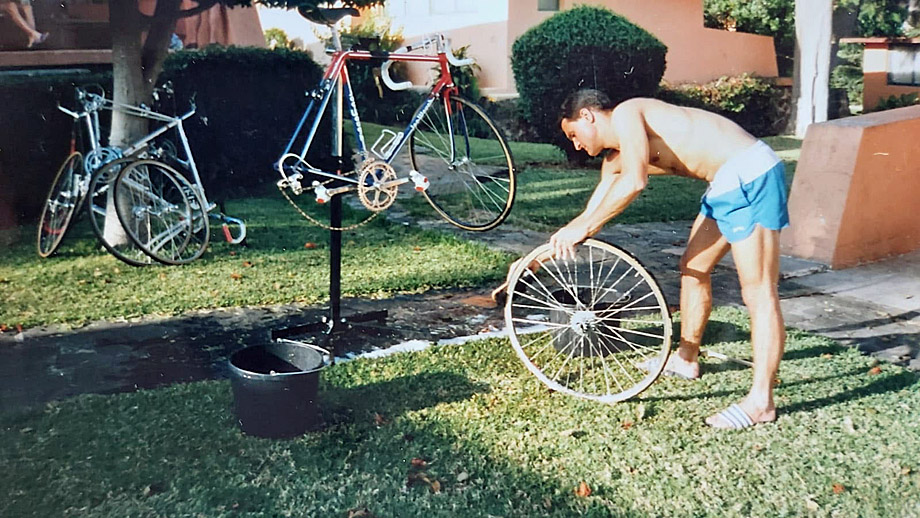 Those bikes won’t clean themselves 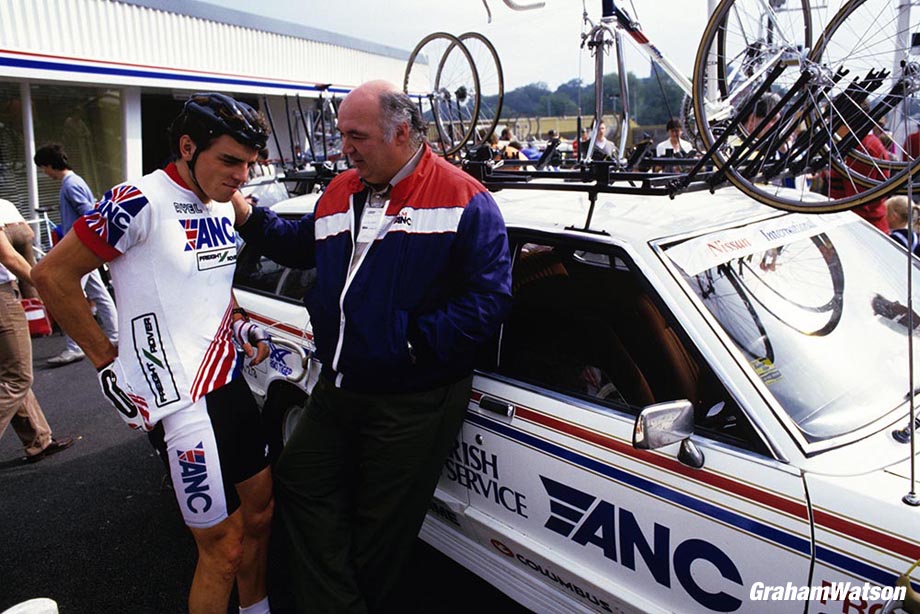 PEZ: Did you get paid, a lot of guys didn’t get what was due to them?
I got a post-dated cheque on the Champs Elysees on the Sunday, I knew things were getting ‘iffy’ so on the Wednesday I paid five quid to get the cheque ‘express cleared’ – the best fiver I spent in my life, it cleared and I got my money. I was on ‘day contracts’ – just £40 per day but I was away for a full month, that Tour started on the Wednesday in Berlin on July 1st and finished on the 26th in Paris after 25 stages. I was lucky that I had a good boss who let me away for the Milk race in May then the Tour in July and Spanish races in Cadiz and Malaga with Alex Taylor in September. 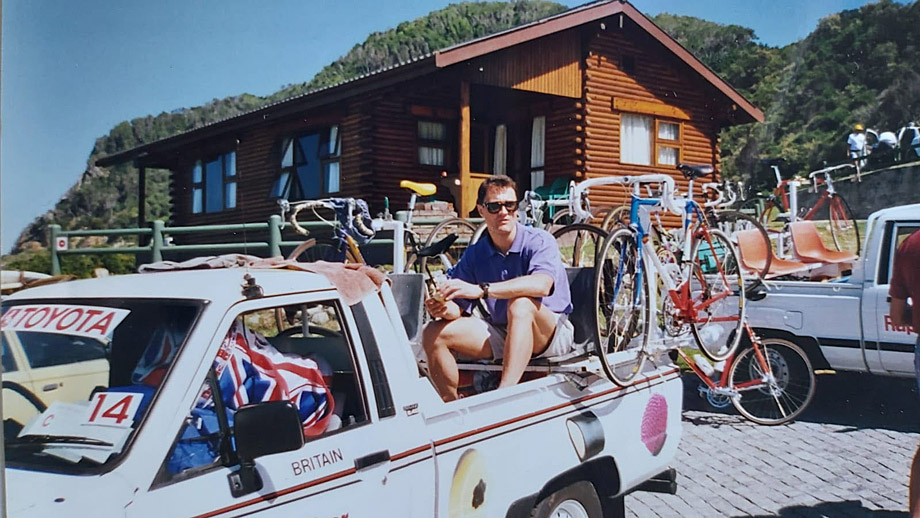 On duty with the GB national team

PEZ: And you were with another team that ‘faded away’ – McCartneys?
Yes, I did the Giro with them but actually got paid there too, where again a lot of guys didn’t – I’ve been lucky that way! It’s unlikely I’ll ever do a Grand Tour again but if I did I’d want to be with the team from the start of the season, build the bikes up from scratch. That way you properly understand the machine…

# Thanks to Steve for his time and his personal photos. # 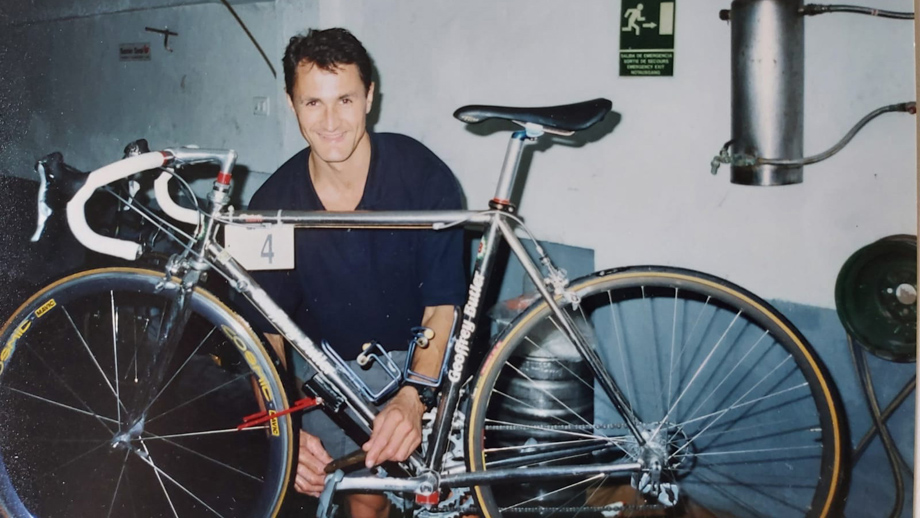