Andrea’s Diary: Looking Back At The Tour

If you still find ourself staring blankly at your pc while thoughts of Lance’s 5th victory waft into your cubicle like a pretty smiling podium girl… we can help make the withdrawal easier! We were lucky enough to talk with CSC’s Andrea Peron several times during the Tour, who helped Tyler ride to a career best 4th place. We just received Andrea’s final Tour diary entry…

– By Andrea Peron, Team CSC – First off, let me apologize to your readers if during the Tour my writings were a bit “light”. The problem is that during a race like this one, the free moments that I had to write were truly few: the day goes by extremely fast, both on the bike and off of it. So, because of my lack of free time, I’ve preferred to focus my energy on the actual race and recount my thoughts on this edition of the Tour de France in this page of my diary.

Before everything else, I have to send my compliments to Armstrong who, with this victory, has succeeded in entering the cycling elite of riders who have won the Tour five times. It was certainly also his most difficult Tour: above all because he found himself a group of athletes that were able to put him into difficulty, but yet again, with his great physical condition and also with an enormous amount of determination, he came out the best. 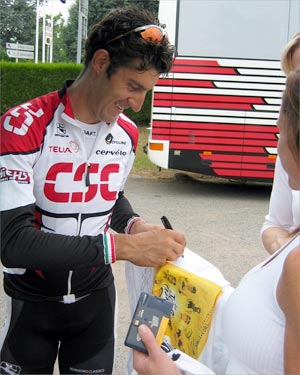 The title of Hero in this year’s Tour, however, in my view, goes to Tyler Hamilton, for everything that he did: from the courage shown in continuing the day after fracturing his collarbone in two places, to the
incredible break that resulted in a stage win in Baionne; impressive everywhere, that’s heroic cycling.

It’s maybe also due to Hamilton that our team was able to get such a great result together. It was like an agreement between Hamilton and CSC: from one side all of us were close, like an umbrella for all of the
kilometers of the race, especially during the early days when Tyler was suffering like a madman; on the other side him, with his huge desire to climb on the bike again and fight with every ounce of energy to continue with what he had spent months preparing for alongside of us. This had definitely given our team a spirit of collaboration and sacrifice.

Coming to my Tour de France, it was without a doubt positive: sorry that in the first parts of the race I couldn’t been seen at the front, but my principle job was to guarantee that my captain was in the best way possible. Certainly at the end of the race, after exiting the Pyrenees, I was able to go on the attack more often, coming very close to a stage win on the hardest day of the race, at Loudenvielle where Simoni won. I had tried to surprise my break companions with one kilometer to go, but Virenque was quick to take my
wheel and so the victory went to Gilberto.

Now finally a bit of rest, with one eye, however, already looking towards the next races in the World Cup.