Rider Interview: It seems you can be the reigning national champion in two different countries. Australian/Italian David Solari proved it in 1985. It’s a great story, but David also rode the Olympics and Worlds with 158 appearances in the blue of Italy on the road and track. 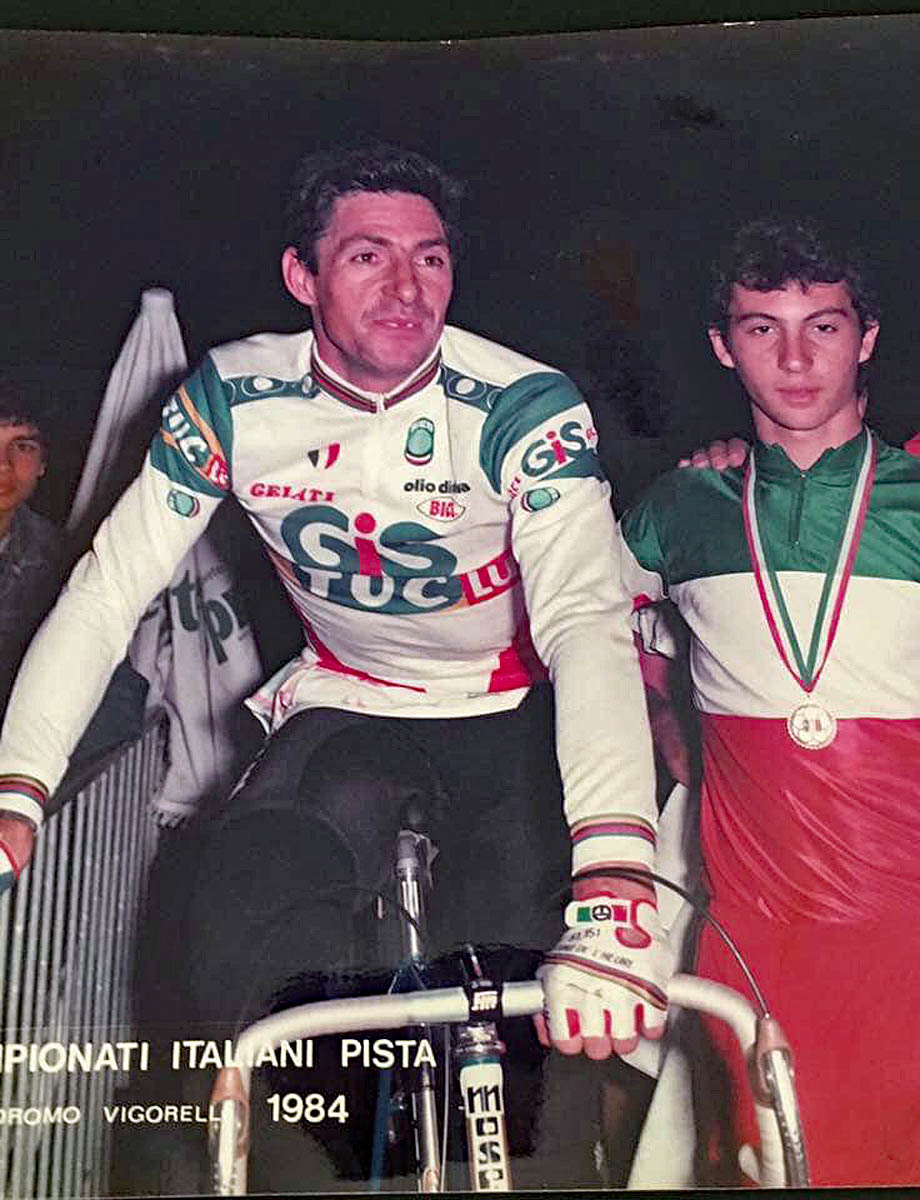 National Champion of two different nations at the same time? Is that possible? If your name is David Solari then the answer is ‘yes’ – and the man made six Worlds podiums in four different disciplines to boot. Read on. . .

PEZ: How did you get into cycling, David?
David Solari: My father Nino was a bike rider here in Australia specialising in six day racing. During the 1960’s six days were huge here in OZ. My father won two six days; one with Sid Patterson and another with Giuseppe Ogna. I caught the bike bug in 1979 when my father competed in the Masters worlds in Austria and Veterans races in Italy. 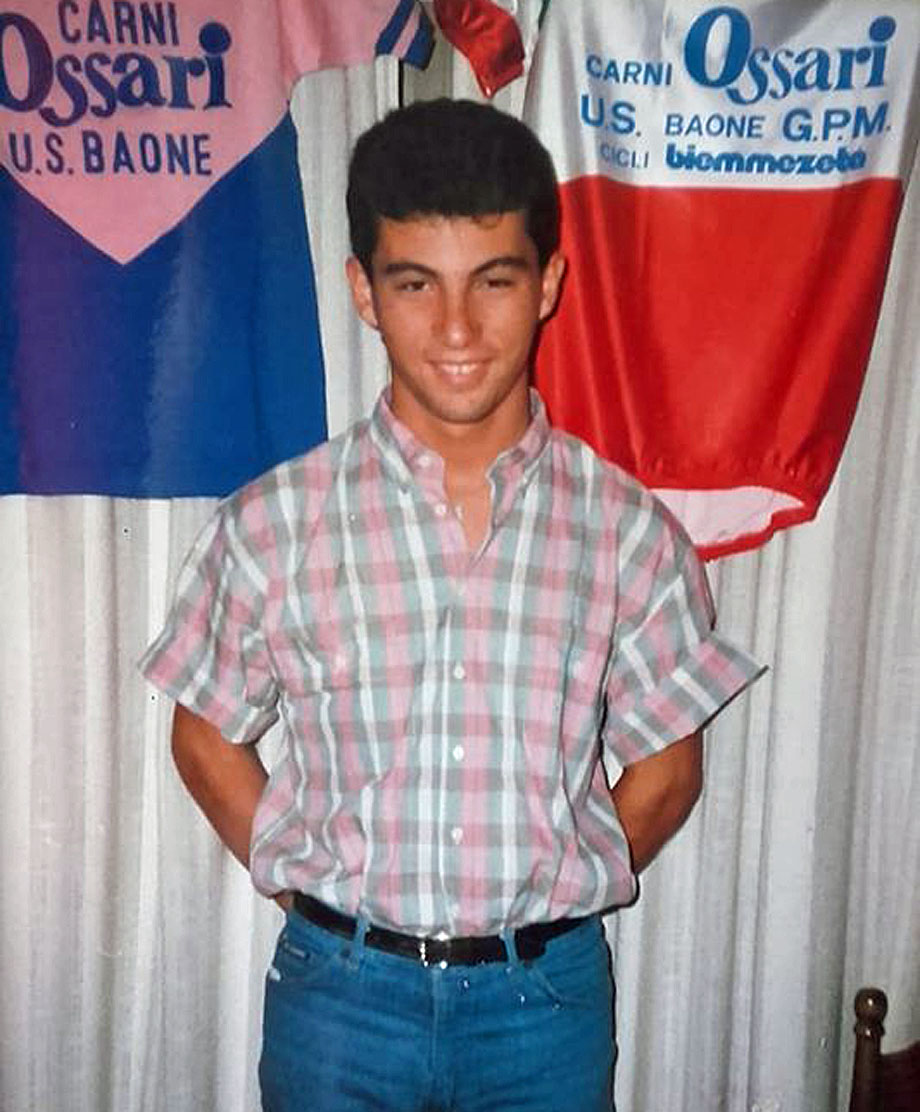 PEZ: ’85 Australian AND Italian champion, how come and in which disciplines?
I had Australian and Italian passports and in 82/83 I raced a few races in Italy, then in August 1984 I competed at the Italian Track Champs at the famed Vel Vigorelli in Milano. I won the junior Individual Pursuit with a 3000 meter time quicker than the seniors were going through the distance. My father had entered me to see how I would go against Italy’s best; then in March 1985 I won the Australian junior Individual Pursuit champ so I was national champion of two nations at the same time.

PEZ: Season ‘86 and two junior Worlds medals, riding for Italy, individual and team pursuits – a big deal for a young man – and why Italy?
My first Worlds were in 1985, I finished fifth in the junior pursuit. In 1986 I won the two bronzes. The team pursuit should have been a gold medal as we’d qualified five seconds faster than any other team, but a crash in the second round ruined our chances. The rider that crashed would later cost us a medal at the ‘88 Games. I was rewarded with a trip to the Senior Worlds in Colorado Springs that year where I rode the points and teams pursuit. My decision to ride for Italy was a choice of life style and opportunity. Back when I raced in Italy, a foreigner couldn’t just enter races and race, they were only allowed to race International races. These races were only held once or twice a month whilst I wanted to race every week. Racing for Italy allowed me to race up to five times a week. I also loved the Italian way of life. 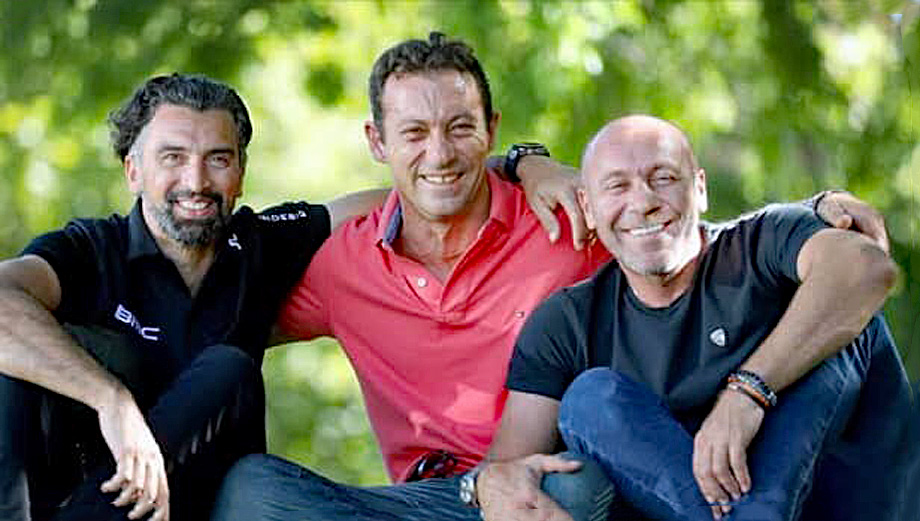 PEZ: Some famous names in that pursuit team with you.
Very famous names who had very good pro careers. Tour of Flanders winner, Gianluca Bortolami; Giro and Tour stage winner, Fabio Baldato and twice Scheldeprijs winnner Endrio Leoni. We are still in touch all these years later and I catch up with Baldato yearly at the Tour Down Under.

PEZ: In ’88 and you rode The Olympics, how did that go?
At the ‘88 games we had good form. In qualifying, Baldato crashed and we virtually rode the race with three riders. We still qualified but met Russia in the next round and were eliminated. With the times we were posting in training, a ride off for third was on the cards. The crash is on YouTube. 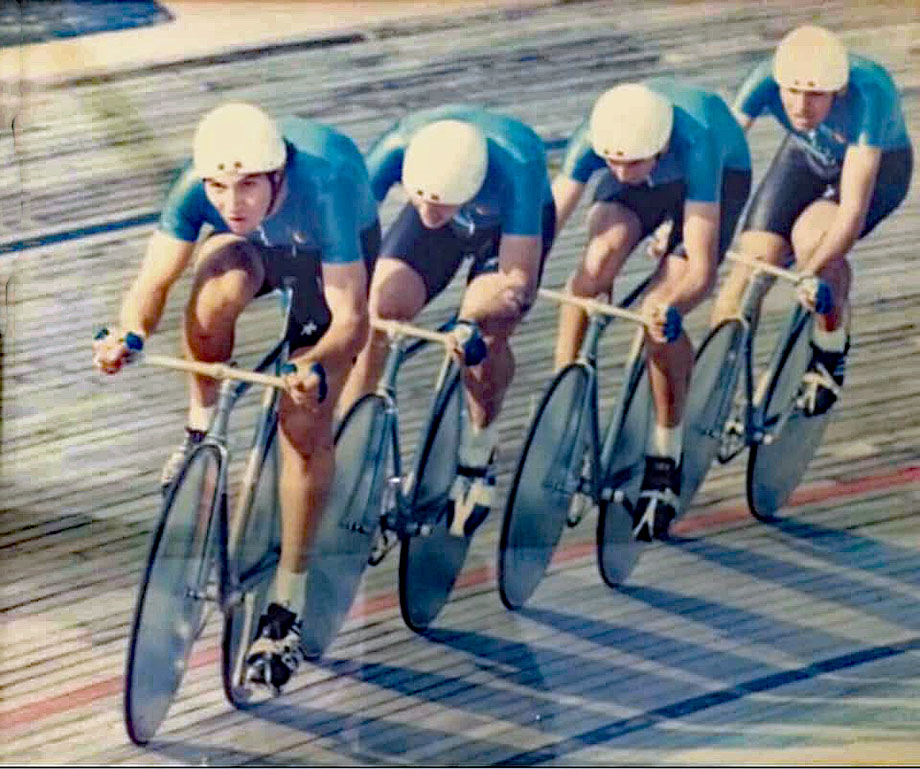 PEZ: The Olympics, nine Worlds and represented Italy 158 times at international level, are those the correct stats – that’s a lot of competitions. . .
Yes, the Worlds from 1985 to 1993, two in 1986, Junior and Senior. Representing Italy was a regular occurrence as we would ride one day international road races as well as tours as the Italian national track team. Add European track meets and the total representation added up quickly – tours included, Giro di Puglia, which I won in ’87, Giro delle Regione, Giro Baby, Olympia Tour in Holland etc. International track meets, European Championships etc.

PEZ: Season ‘89 and third in the senior Worlds team pursuit.
Yes, a good result remembering that in the 70-80’s we were competing against the mighty Eastern Bloc countries. Third was almost like winning. 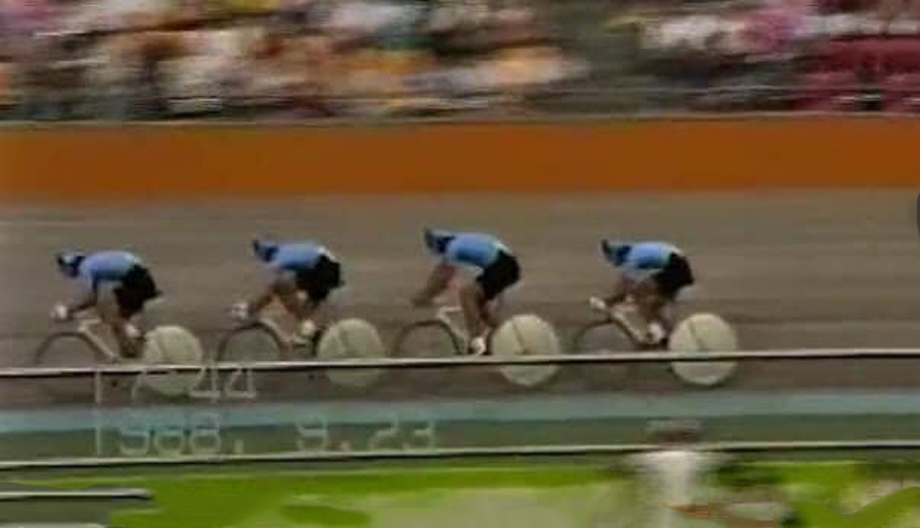 PEZ: Again some top names in the team.
Yes, World Madison Champion and top six day rider, Marco Villa; Olympic Points Champion and roadman sprinter, Giovanni Lombardi and Ivan Cerioli who rode pro with Ballan. We are all in contact still and I catch up with Lombardi who comes to the Tour Down Under when Peter Sagan rides down here. Giovanni is Sagan’s manager.

PEZ: What about those nice low pro Colnagos you rode?
The Colnago’s in the famous photo of Lyon? They were actually Alan frames, carbon with aluminium lugs – they were light but flexed a lot. 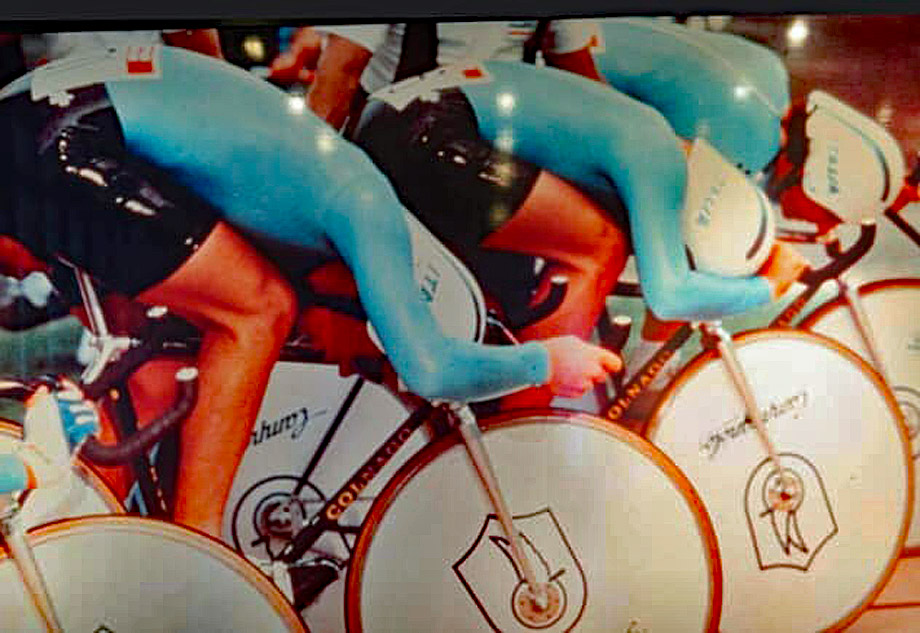 PEZ: And the ‘rubberised’ skinsuits?
Funny story with those skinsuits. They were running late making them and we were told we wouldn’t get them in time. Our coach was so adamant that we get them and use them that he demanded they send them, which they did – with no chamois. We rode the four rounds, in 40ºC heat, with no chamois. All in the name of aero. Our bums were very sore for weeks!

PEZ: Why leave the team pursuit and go to motor paced?
After placing at the Worlds in pursuit events, I realised that it was going to be difficult to win a world title with the Eastern Bloc countries around. I’d ridden the Points at the ‘86 senior Worlds as a junior and went well, winning my heat. I wasn’t to get another chance at the point’s race, despite being Italian Points Champ in 1988 so I turned my hand to the Motor Pace. 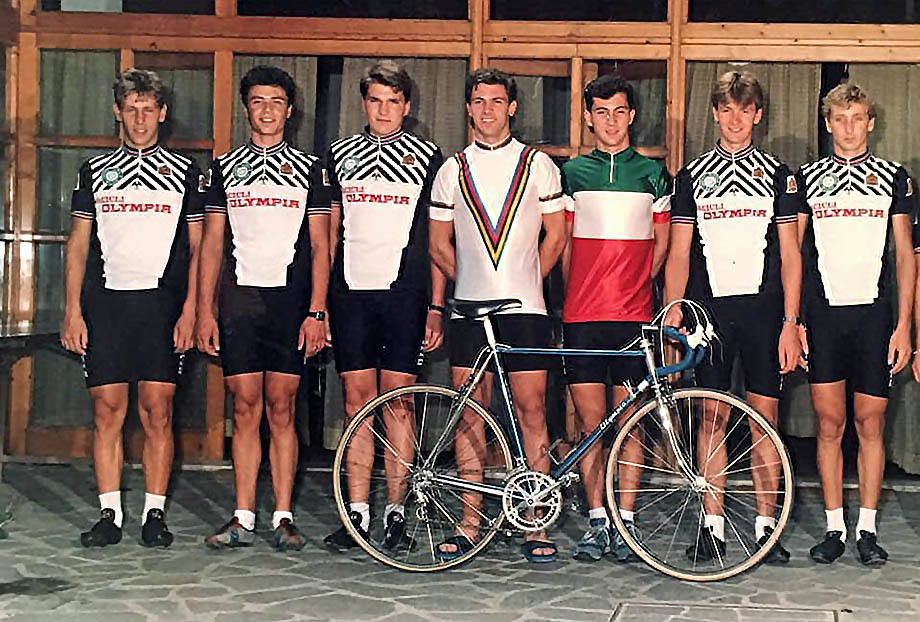 PEZ: You were second to Roland Konigshofer of Austria in the 1990 Worlds stayers, any ‘what ifs’?
In 1990, no ‘what if’s.’ It was my first full distance ride behind the Motors and Konigshofer was a cut above.

PEZ: You were second again to Konigshofer in the ’91 Worlds, deja vu…
Yes, second again but this was a different story. I found myself not just battling Konigshofer, but his brother and three Germans as well. If I was to win a World Championship, this was the one. I’d qualified fastest by a considerable margin. But that’s motor pacing – the strongest rider doesn’t always win. 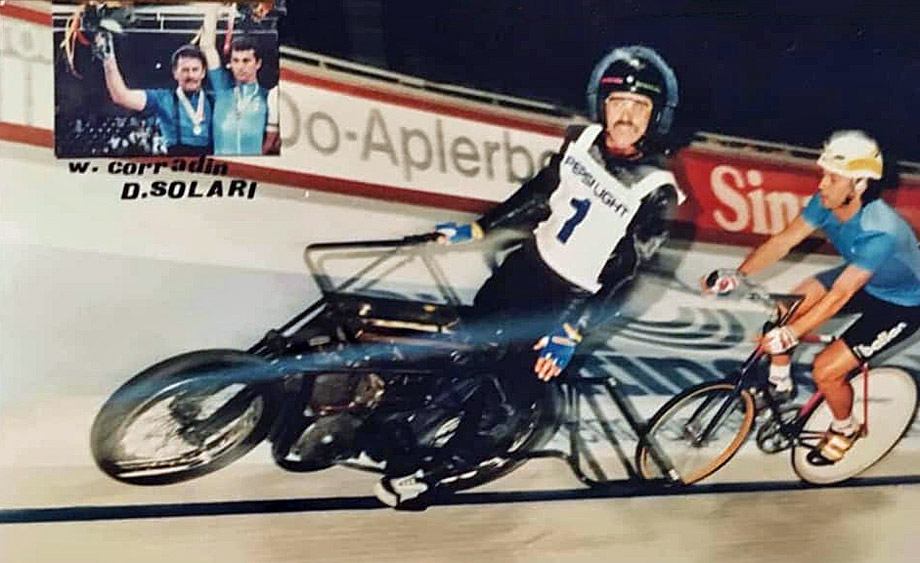 Behind the big motor

PEZ: Second to Podlesch in ‘92 in this last edition of the World amateur stayers?
Again competing against the Germans and Austrians. Unfortunately, I was never blessed with strong team mates who could make the final and help me.

PEZ: Konigshofer and Podlesch turned pro to continue to pursue their ambitions with the ‘open’ Worlds motor paced continuing for a few years after the amateur one was disbanded – did you consider that route?
In 1993 I rode the first of the open world stayer championships in Norway. I had already lined up a pro contract to ride the road and six day races. At the end of 1993, I returned to Australia for my usual off season break and fell quite ill. I was diagnosed with an inflammatory bowel disease. This took nearly two years to get under control. By that time, my wife had had twin boys and I’d settled back into life in Australia again. I continued to race until 1999. I was asked to join the AIS and to re-join the Italian National team for the 1996 Games. I declined both as I had a very successful bike importing business and restaurant. 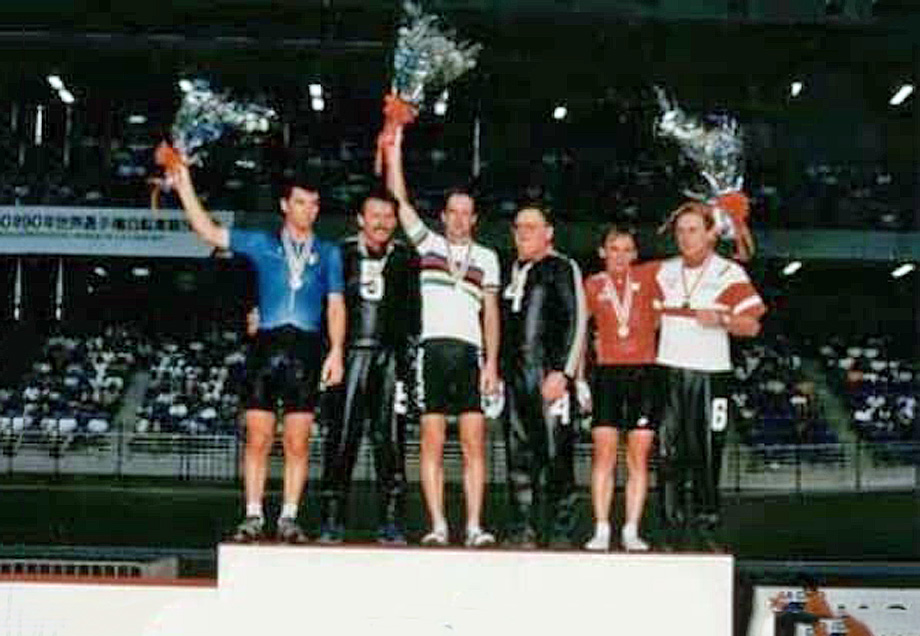 PEZ: Were the stayer ‘pay offs’ at the Worlds as bad as I’ve heard?
WORSE!

PEZ: There was an Aussie title in too in ’94, tell us about that please – did you relinquish your Italian citizenship to ride? why return to Oz?
I rode the Aussie titles at the National Coach, Charlie Walsh’s request. I rode the 10 mile scratch race, where my job was to help Stuart O’Grady; he won, I rode the Points race to help Brett Aitken and he won too. I also rode the team pursuit which is the title we won. No, I didn’t relinquish my citizenship, I have both to this day. 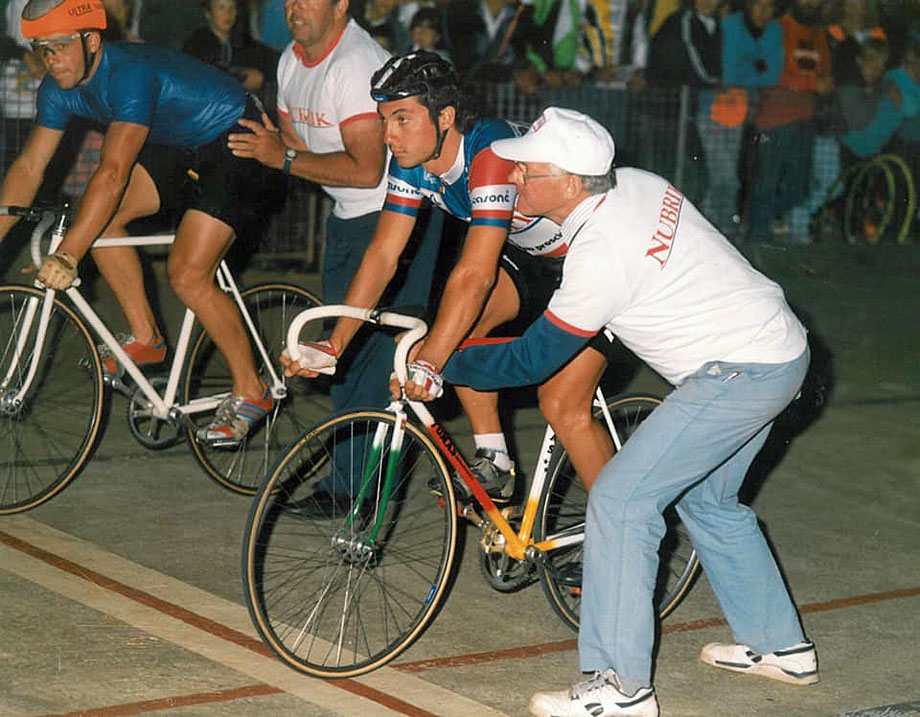 PEZ: I believe you got ‘stick’ from some quarters for having ridden for Italy?
Initially I did and I didn’t take it well. Later I took it with a pinch of salt. Many of the riders who represented Australia back in the day have said they would have done the same as I did.

PEZ: You weren’t a bad road rider either?
I was probably a better road rider but I really wanted to win a world title on the track. I won some very big amateur/elite road races – the Giro di Puglia, a seven day tour; Vicenza Bionde, an International race still held today; Cinturon in Majorca; stages of the Tour of Majorca. I was very disappointed when I couldn’t go back in ’94 and have a full season on the road. 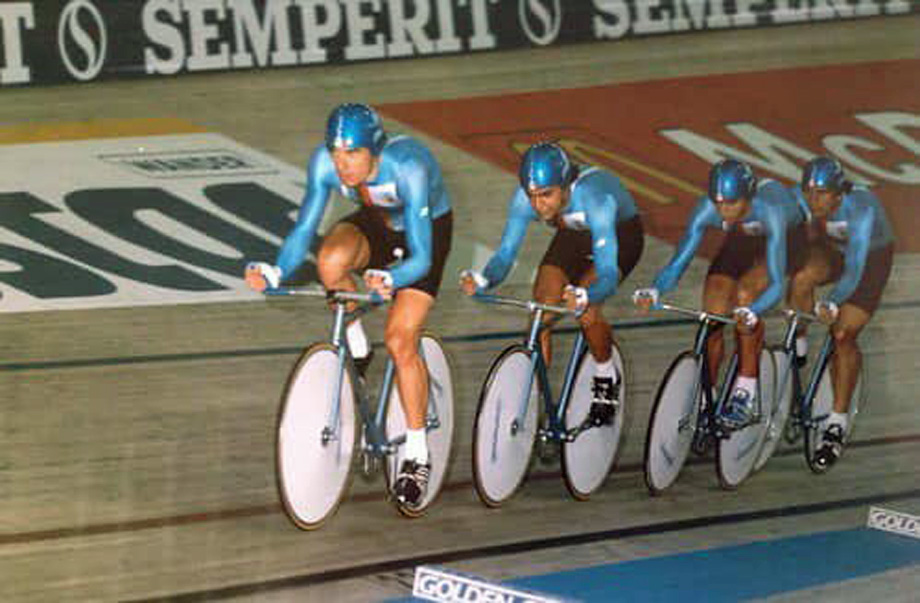 PEZ: What do you do now?
I owned two restaurants which I’ve since sold and I was the importer and distributor for Colnago and Daccordi bikes. But I’ve sold everything and now work at the Norwood Football Club which is an Aussie Rules Football team here in Adelaide. Life is good.

PEZ: Regrets?
I think we all look back and think we could’ve done things a little better. Maybe not returning to the Italian team or joining the Australian team when asked to in 1994. The wall had come down then and the Eastern Bloc countries were no more. Italy and Australia won many world championships after the wall came down. But I’m very happy with my achievements. 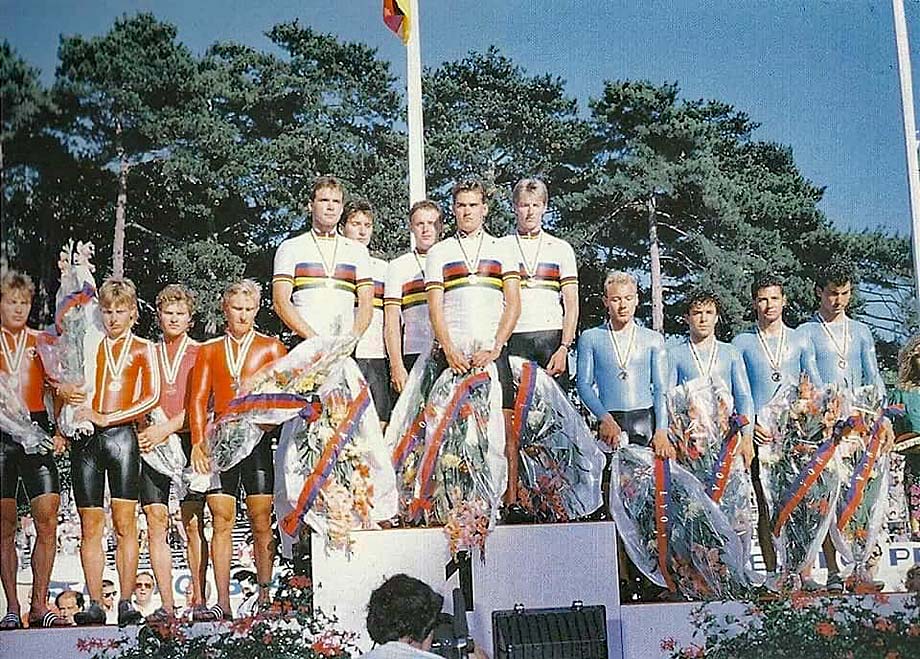 # Thanks to David for his time and to all the photographers, mostly unknown. #