Team Manager Interview: Times are hard in the World of cycle team management, but Bruno Reverberi has been a team boss for 39 year… and counting. There are not that many Ineos, Deceuninck and Boras around, and state sponsors like Astana, UAE and Bahrain are even fewer, but Reverberi has managed to pull it all together for at least the next three years with new sponsor Faizanè. Ed Hood hears all about it. 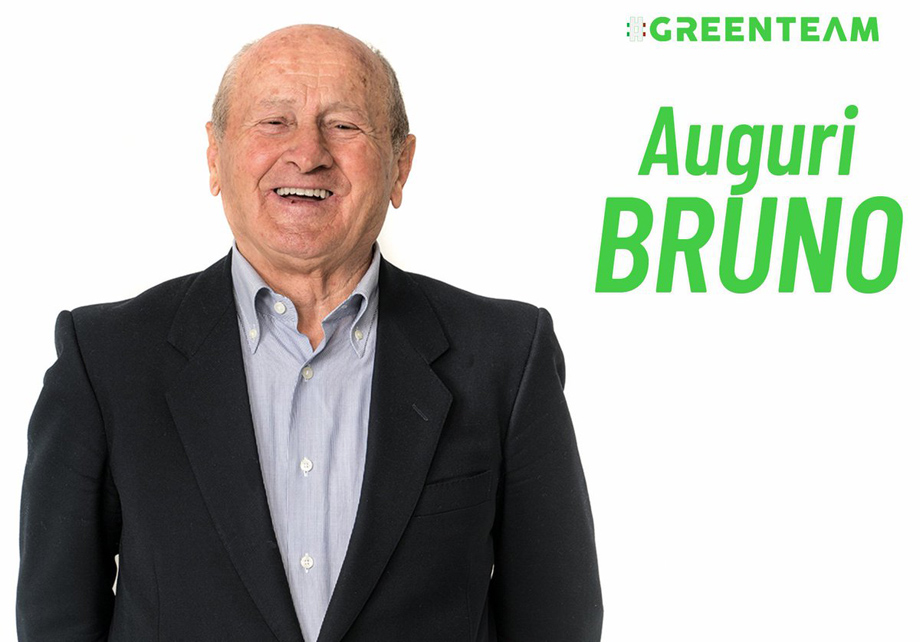 As Johnny Cash says in the song, ‘San Quentin’; “I’ve seen ‘em come and go and I’ve seen ‘em die…” It could have been written for pro continental team Bardiani-CSF-Faizane’s head honcho, Bruno Reverberi who runs the team with brother, Roberto and has been in pro cycling since the beginning of the 80’s.

The team has pedalled under a variety of names but it’s spine and soul have never changed be it; Termolan, Santini, Selca, Italbonifica, Navigare-Blue Storm, Scrigno-Blue Storm, Scrigno-Gaerne, Scrigno, Navigare-Gaerne, Ceramica-Panaria, CSF Group-Navigare, Colnago-CSF or Bardiani. Through the kind offices of Sen. Reverberi and team communications officer, Luca Barioglio we gained an insight into professional bike racing where the budget IS limited and there’s no ‘sugar daddy’ or state funding. 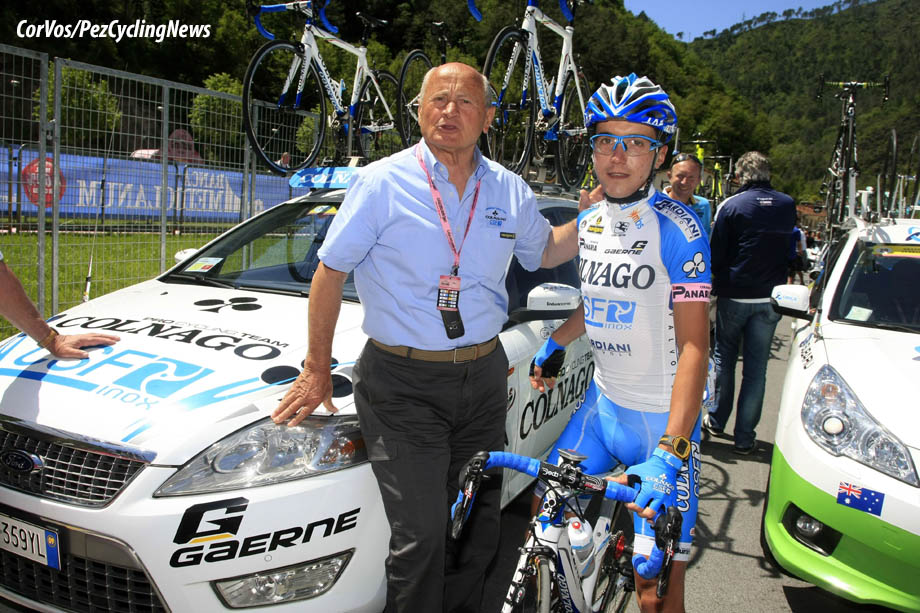 Bruno Reverberi with Domenico Pozzovivo at the Giro d’Italia 2012

PEZ: How did you become involved with professional cycling, Sen. Reverberi?
Bruno Reverberi: We had been riding with the same sponsor, Termolan for 12 years in dilettantistic categories, and we made the leap into professionalism with Termolan-Galli in 1983. Galli was the company of Gianni Savio – which manufactured groupsets and components – who today is the manager of another Italian team pro continental, Androni Giacatolli Sidermec.

That was the beginning of a new adventure in the signing of young and Italian riders. Out of 11 riders only one was a foreign rider and only one was already a professional. All the others were neo-pros at their first experience. Among these there was Davide Cassani, today the Sports Director of the Italian national team. (Cassani was a multiple winner of Italian semi-classics; Emilia, Agostoni, Sabatini, Bernocchi. . . ed.)

PEZ: How many seasons now?
In 2020 it will be 39 years of professional involvement. 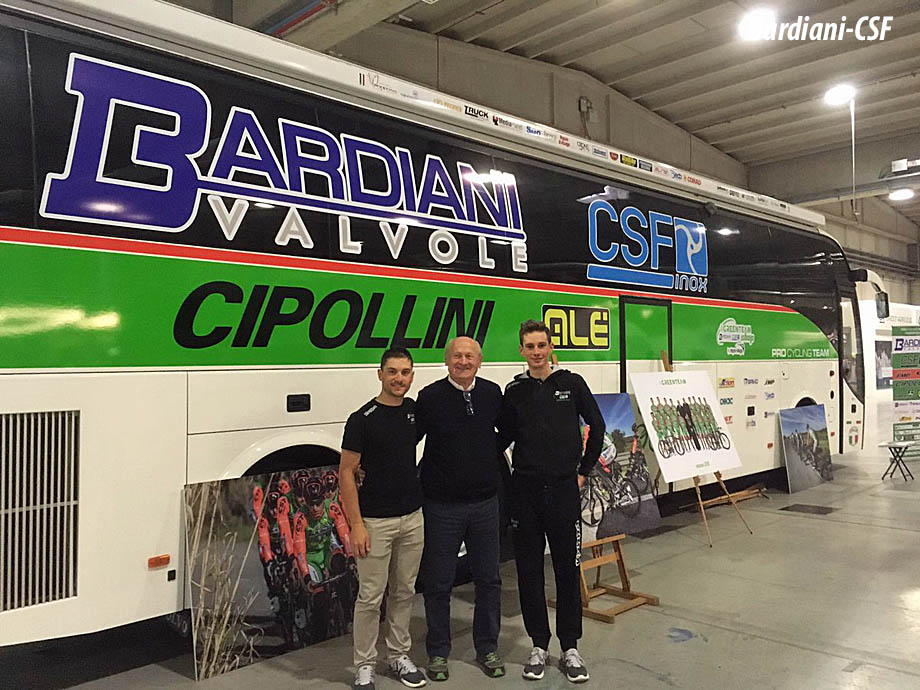 PEZ: How do you go about gaining/retaining sponsors for the team?
In Italian we say that it is “like going fishing without the bait.” Especially for professional teams, it’s very difficult because we have no guarantees on the race calendar and therefore we cannot make great promises to the sponsors. To keep them then, as we do, it is essential to have a solid, Italian project and carry it forward, thus giving continuity and a consistent return of image to our partners.

PEZ: And you have a new major sponsor on board for 2020?
From 2020 Faizanè S.p.a. will join our team. We have thank them for the trust, but above all we thank for what they are doing for the Italian cycling. We come from a difficult race season but we have always had a clear project; to support Italian riders and give them opportunities to become professional riders. Faizanè understood this and chose our project giving important oxygen to Italian cycling. 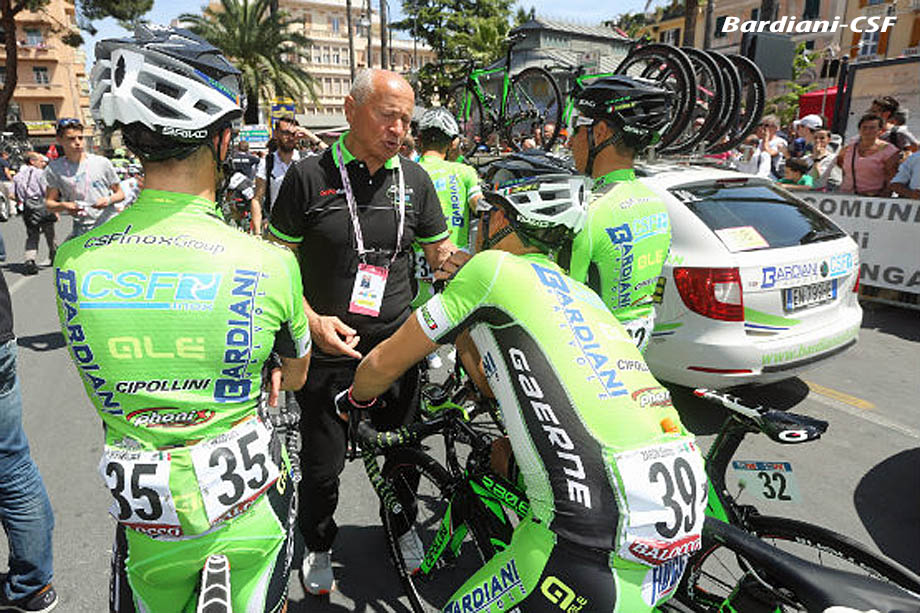 ‘This is what you have to do lads…’

PEZ: Tell us about how you select riders to join the team.
The selection starts, in our case, from young riders. I personally am one of the few who still goes to see all the amateur competitions. In addition, many Sports Directors of amateur teams are my former riders and sometimes they draw my attention to an athlete; but it’s always me who goes to see them in person. Having said that today it is no longer easy to select them because the World Tour teams also today come to select among the amateurs – making our work even more difficult.

PEZ: Who should we look out for in 2020 in Bardiani?
We have a very well-balanced roster with fast riders who can bring victories, but even if they haven’t won yet; I really believe in Giovanni Carboni, who can hold his own in stage races as a climber and even a time trial. The new riders coming in our team carry a baggage of about 20 victories obtained in the last year, from Matteo Pelucchi to Marco Benfatto, from Giovanni Lonardi to Filippo Zaccanti; we strengthened ourselves to improve sports results in 2020 while maintaining a 100% Italian soul; we will be the only Pro team composed by 100% of Italian riders. 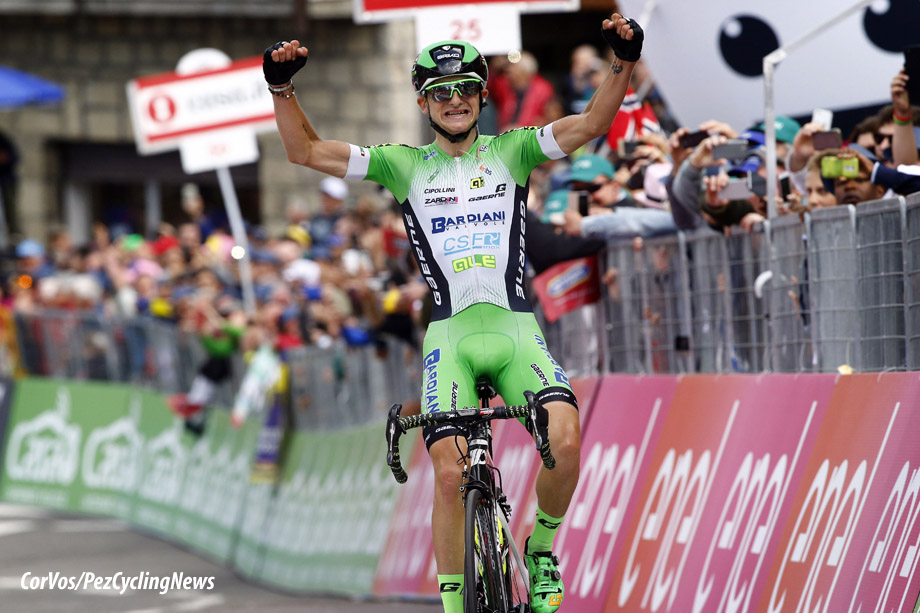 PEZ: What have been your best days with the team?
It’s difficult to say just one. My best memories in cycling comes from the year when we won 35 races, some of them stages in the Vuelta a Espana and Giro d’Italia. But also in 2014 when we won three stages of Giro d’Italia – that for a Professional team is something amazing if you think that many teams with big budgets won NO stages. Good memories also the two Italian National Championships won with Podenzana and the three Gold Olympic Medals won in 2004 in Athens with Australian riders. (Graeme Brown took gold in the team pursuit and madison whilst Brett Lancaster was also in the team pursuit squad and in 2005 won the Giro prologue for Ceramica Panaria-Navigare, ed.)

PEZ: And the worst?
The worst moments were when some athletes disregarded the trust we had placed in them by breaking all the internal rules of the team. Fortunately, sponsors and organisers realised that the team was a victim like them. But these are moments that leave the sign because they have disregarded ethics, regulation and the trust we placed in them. 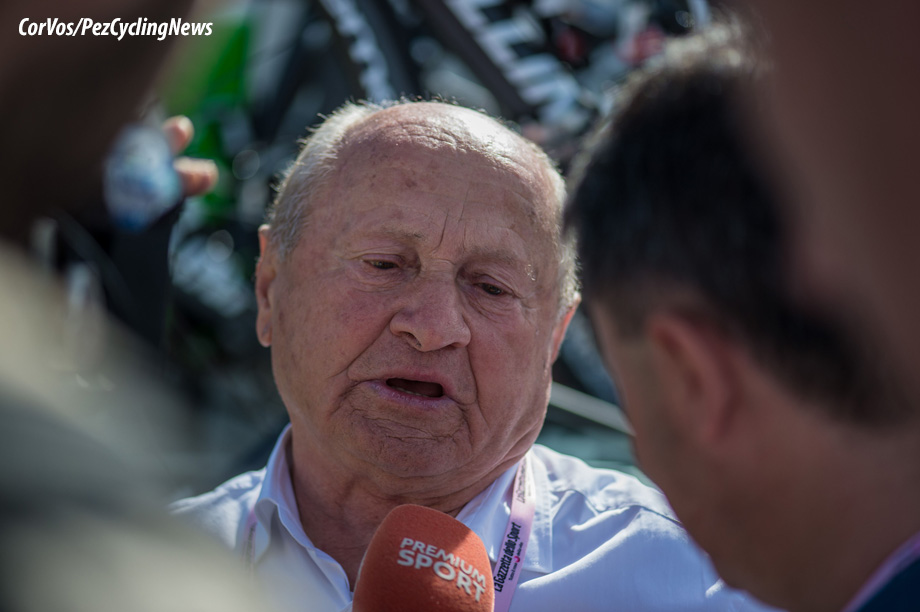 An opinion worth hearing

PEZ: Why are there fewer Italian teams these days?
To build up teams in Italy today is more expensive than in other countries and competition on sponsors is high even with other important sports in our country. But the real problem is not being able to give calendar certainties and therefore image returns to the sponsors. All the new sponsors ask me at the first meeting if we do the Tour of Italy and I can’t give them guarantees on that.

PEZ: What is your opinion of ‘super teams’ with a rich man or nation behind them rather than a commercial sponsor?
This will create a double problem in the future, not only for us as a professional team but also for the World Tour. First of all, it’s not an isolated situation, if we consider both the nation-teams and the sponsors strongly linked to a state, these are over 50% of the teams World Tour. Also some of these are linked to countries where cycling is a fashion that is likely to be temporary and not a lasting passion as it is in Europe. On the other hand there are now four or five super teams that win everything and the others that win very little and this makes it difficult even for the World Tour teams to attract sponsors. 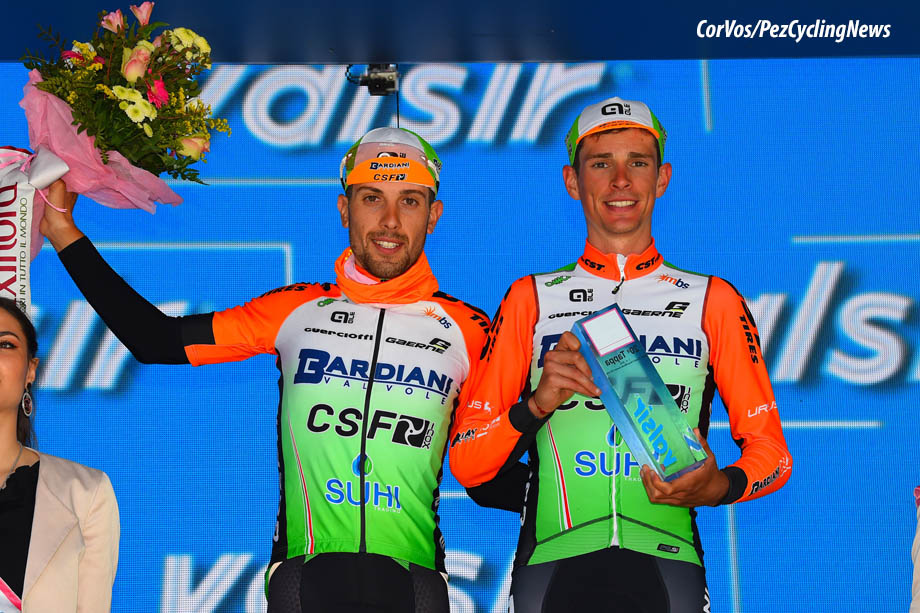 Bardiani-CSF on the Giro’19 stage 20 podium

PEZ: What is your opinion on the changes the UCI has made regarding Grand Tour selection for second division teams, cutting the number of ‘wild cards’?
In so many words, the reform is really “trash,” made to give opportunities to some organisers and some countries, above all France. Instead of reducing the teams from 18 to 16, they brought the WorldTour teams up to 19 to allow entrance to the Cofidis team. In Italy a team like ours needs the Giro d’Italia ‘wild card’ to maintain sponsors. Otherwise how can we guarantee their visibility by riding only in China?

PEZ: What is your opinion on the trend by Grand Tour organisers to include ever more, longer, higher climbs?
I can understand the necessity of organiser to attract public and TV with a big show and so they have to think and build Tours with difficult stages. On the other side, to have such a long-lasting calendar, from January to November with such hard races means that some years big Champions are never in battle with each other. They could have good conditions and different moments and choose different races as main goal. 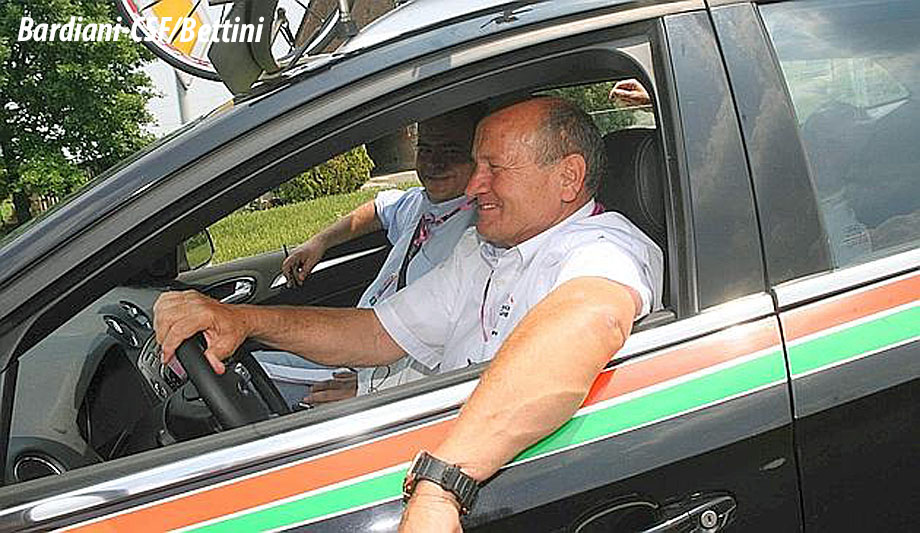 Bruno behind the wheel

PEZ: Will there be another generation of the Reverberi family driving the team car?
My nephew, Roberto’s son, is 21 years old but I do not wish him to go into a team car, indeed we are keeping him away from this world because I do not see a big future for our sport in Italy. We are managing a team since 39 years ago, but we are an exception. Today there are teams, managers and DS who run a team for five or six years then they are forced to close due to lack of sponsors. So yes, there is another generation of Reverberi, but I wish him a bright future outside of this world. 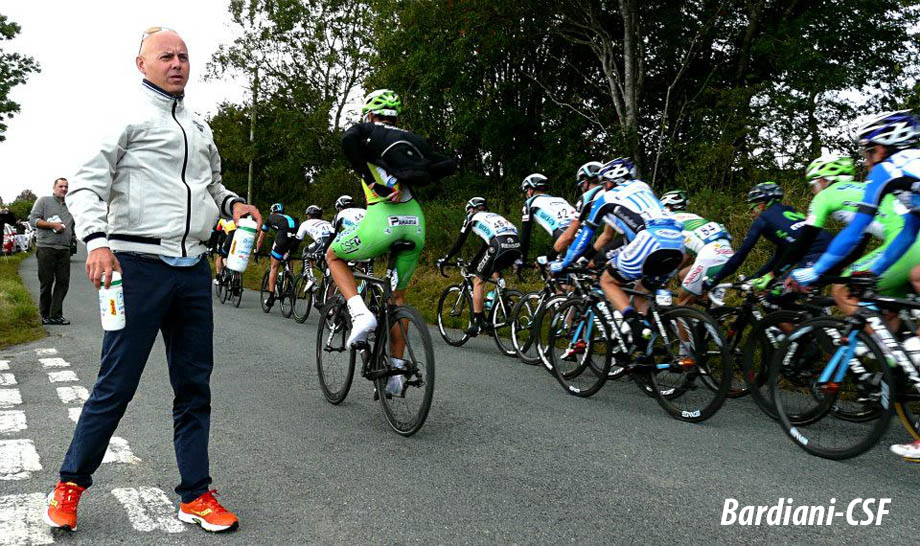 Roberto Reverberi – The next in line

# With thanks to Luca and Sen. Reverberi. # 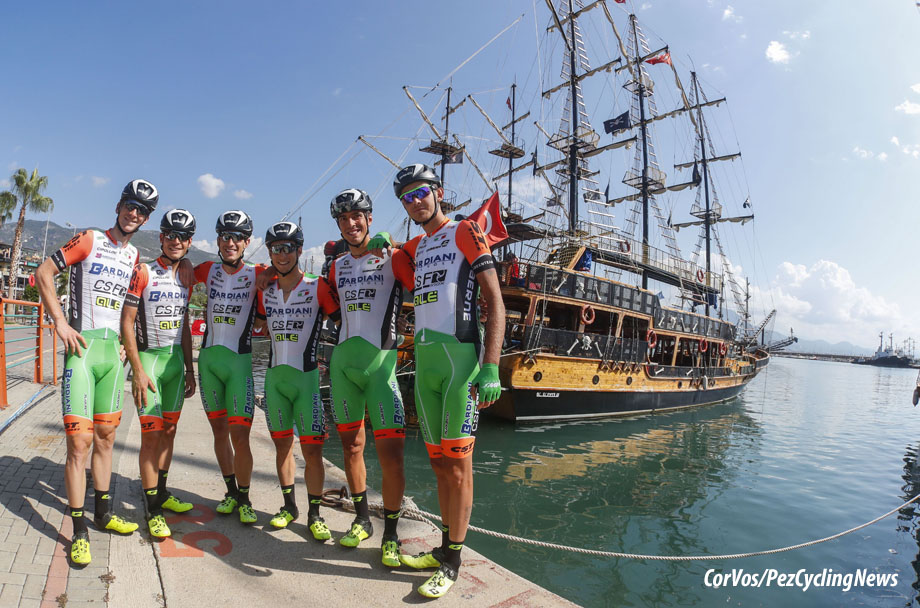 After Vincenzo Nibali, Alberto Bettiol Helps his ex Under23 Team