Ex-Rider Interview: There have been a lot of ‘stars of the road’ from Belgium, probably the best riders in the World. Ludovic Capelle had a lot of competition, but he still has a fine palmarès. Ed Hood had a chat with the man from Namur. 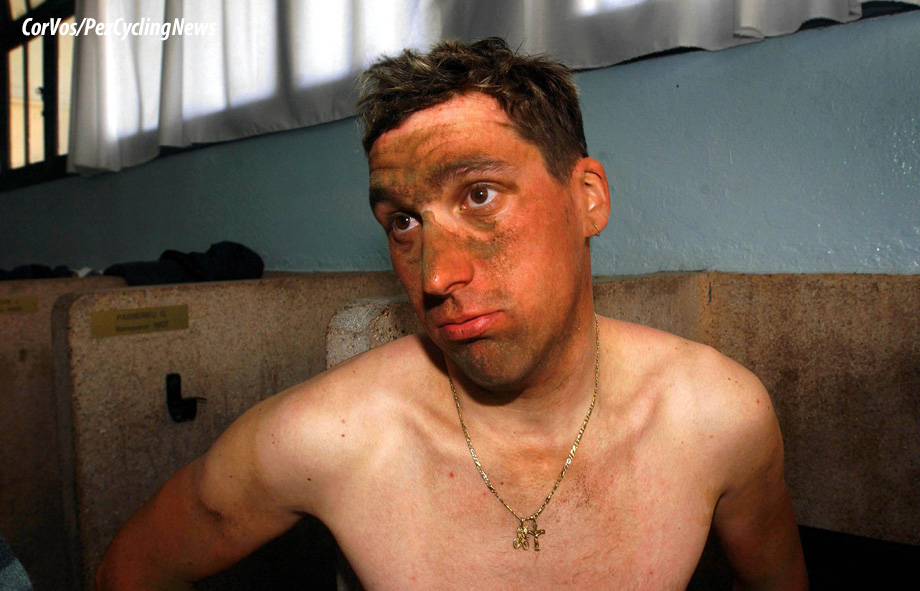 Can only be the Roubaix showers

June 2001 and Viktor and I are in Halle for the Belgian Elite Road race Championship. All of the big hitters are there, twice champion – he’d go on to win four times – Tom Steels, 2000 winner Axel Merckx, 1996 champion Johan Museeuw, Peter Van Petegem. . .

But the man who pulls on that beautiful red, yellow and black jersey is AG2R’s brick-built outhouse flahute, Ludovic Capelle, out dragging slippery finishers Fabian De Waele and Michel Vanhaecke. Capelle won two u23 Tours of Flanders and became big finishing Estonian Jaan Kirspuu’s trusted ‘pilot fish’ – he was also a three time Belgian semi-Classic winner in his own right. There was a ‘hiccup’ late in his career with a doping suspension but he ‘beat the wrap’ and went on to successfully mentor up and coming riders in second tier teams. I’d always fancied catching up with the man. . . 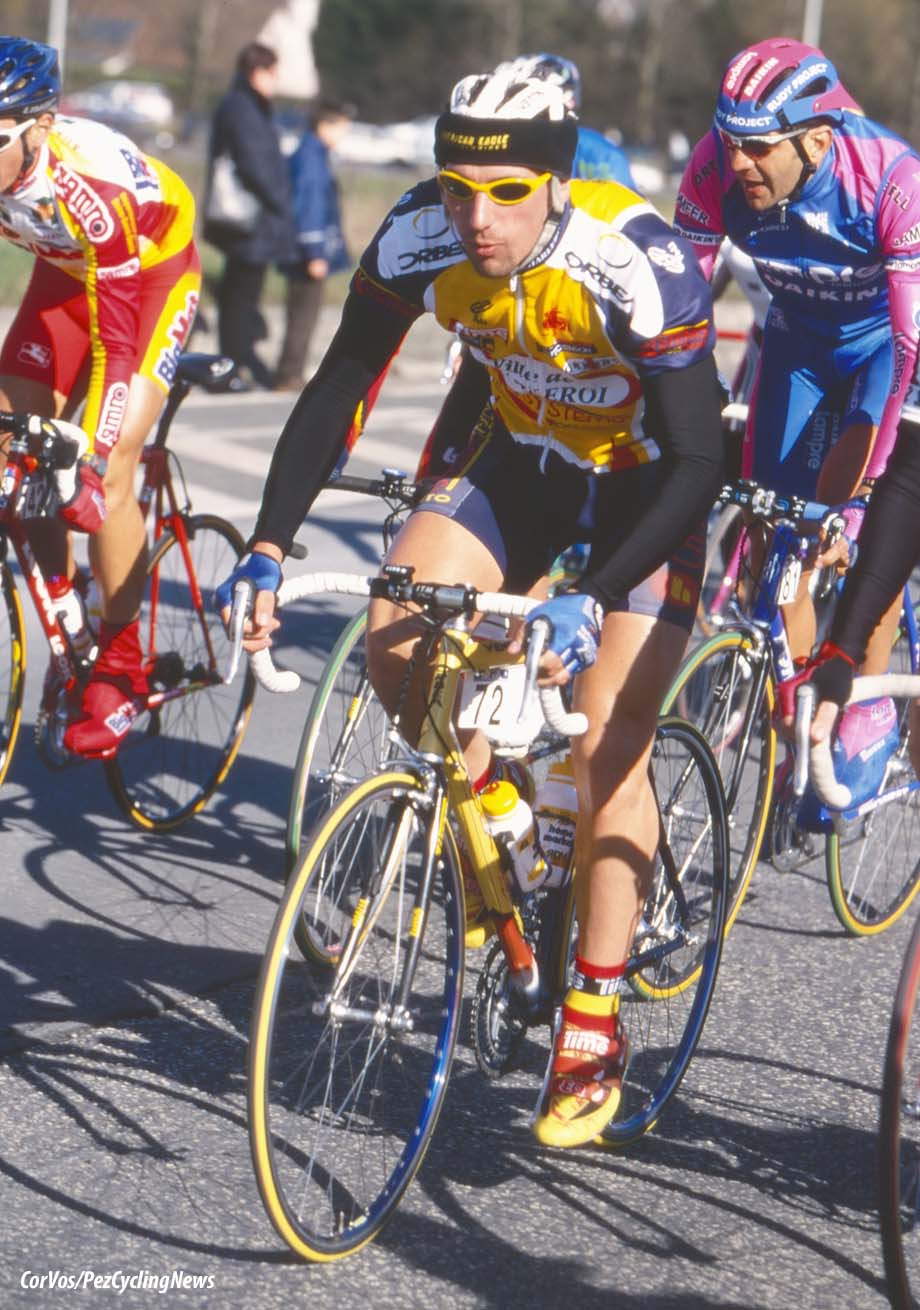 PEZ: You were originally a track sprinter but then went to the road?
Ludovic Capelle: I started cycling BMX at the age of six, then I went on the road at 12 years-of-age due to back problems. I have always practiced cyclo-cross in winter and track championships in summer. But I always prioritised the road and went professional after three years as an amateur.

PEZ: Winning the u23 Ronde – a big result.
I went on to win the Espoirs Tour of Flanders two years in a row, which remains a record and also made places of honour in Paris Roubaix – fourth where I was on my way to victory and suffered a third puncture. I was also third in Paris-Tours and sixth in Het Volk. In my second year amateur when I first won Flanders my results were ‘up and down’. But I was much more consistent in my third year and was selected for the Worlds in San Sebastian where I was in the leading group but my derailleur broke in the final. In ‘97 I was number one in the UCI u23 rankings. 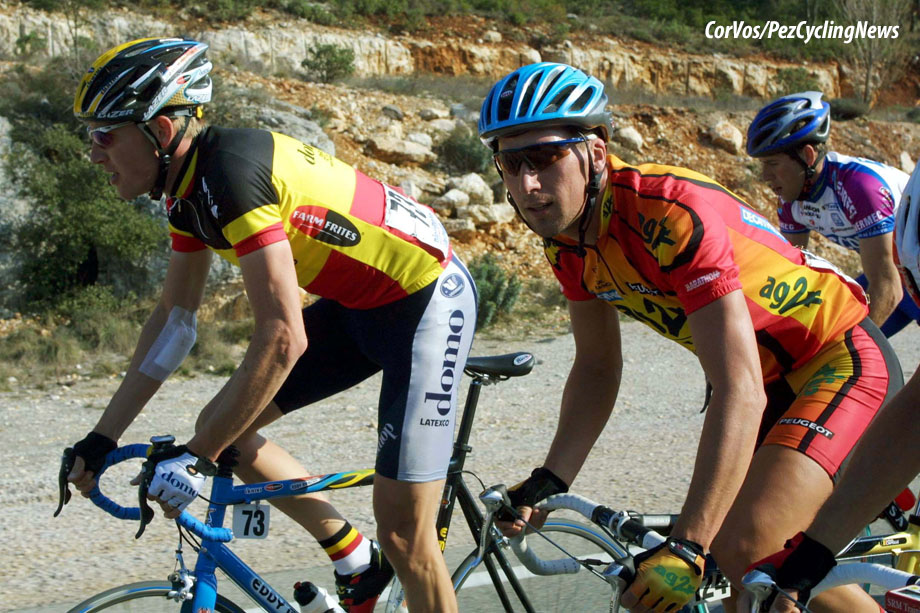 PEZ: At the end of ’96 you were stagiaire with Mapei, tell us about that.
After my first success in the u23 Tour of Flanders Patrick Lefevere, came to get me and offered me an internship. I did a nice spell with the team, contributing teamwork in races like Paris-Brussels, where Mapei put Tom Steels on the podium in second place and Tristan Hoffman in fourth place – excellent memories. After that I was actually followed by them but it was too early in my eyes to turn professional.

PEZ: In ’97 a second win in the u23 Ronde.
It was my goal of the year and I ‘made bingo’ with six other beautiful victories and places of honour in the classics as I described earlier. Flanders was a wonderful win because I was at a level above the rest that day. 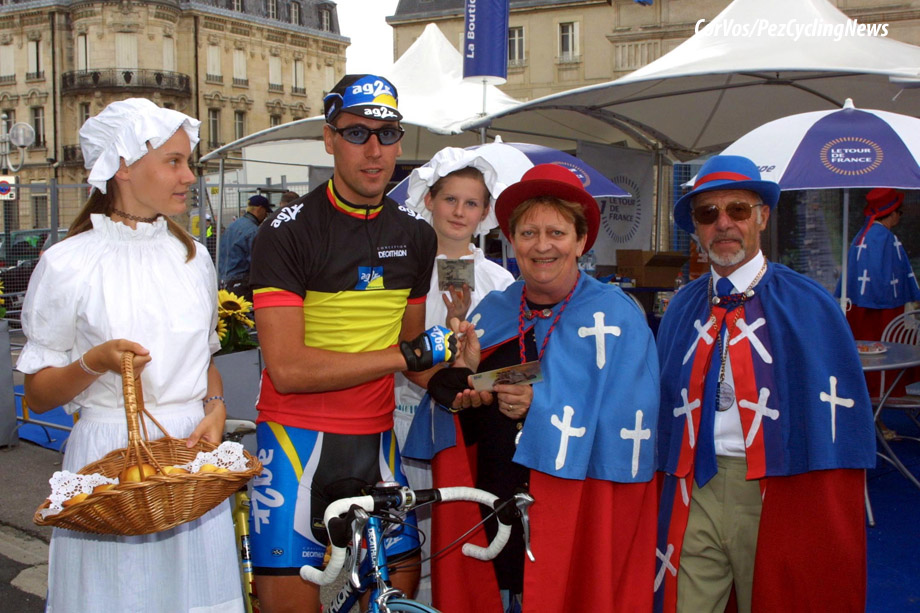 The Belgian champion with ag2r in 2001

PEZ: A stagiaire place with Lotto in ‘97, what was that like?
That could have been successful but I was also with the national team in preparation for the World championship so I only rode a little with LOTTO.

PEZ: How did you get the RDM ride for ‘98?
I was originally meant to sign with Lotto but there was a misunderstanding and instead went to the Ville de Charleroi – RDM team with Didier Paindaveine as my DS. I had three great years with a superb program and was able to be advised, guided and protected to mature peacefully. 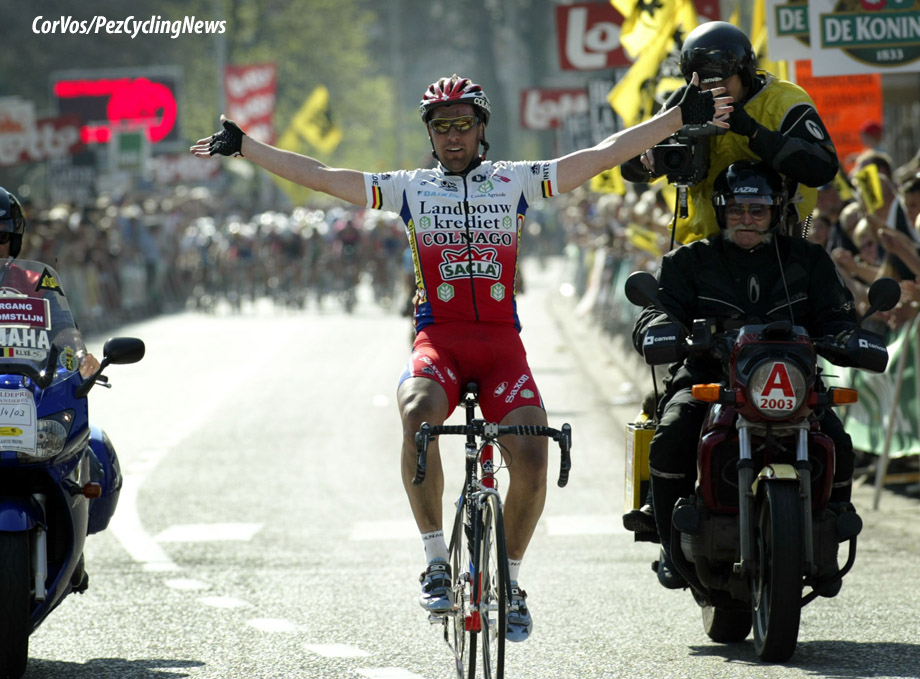 PEZ: I notice you’ve had second and third placings in the Tro Bro Leon – why did you like this race so much?
Because I like the classics and the Tro Bro Leon is like a ‘mini Paris Roubaix’. I participated two times with those solid results.

PEZ: Ville de Charleroi gave you many podiums.
From the first year the team let me adapt to the pro peloton, riding a ‘protected’ program – this enabled me to take victories and podiums in beautiful races; I was able to stand out in races like the French Cups. 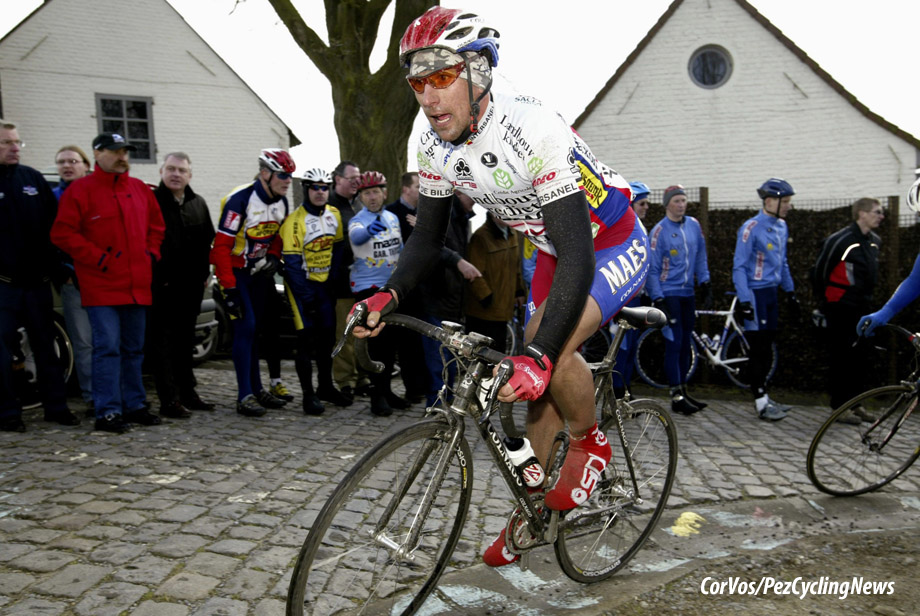 PEZ: AG2R for 2001 – how did you get this ride – a Belgian on a French team ?
They’d seen my results, like third places in the Tro Bro and Paris-Brussels. The team was also made up partly of guys from the Baltic States like Arturas Kasputis from Lithuania and Lauri Aus of Estonia – and his compatriot Jaan Kirsipuu with whom I directly formed a magic duo.

PEZ: You were Belgian Champion in 2001, how much did this change your life?
The Belgian national jersey changed my life, but I stayed the same person; however it did change the way other people thought of me. It’s great to have worn the red, yellow and black jersey and participated in a Tour de France which went in Belgium that year; a race where we won a stage with Jaan – unforgettable! 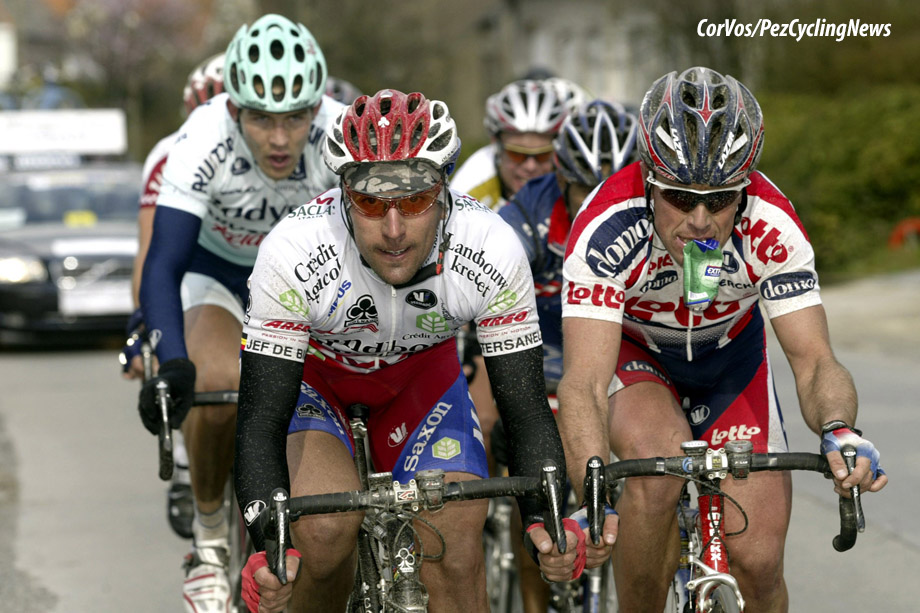 PEZ: You were second in the Belgian Champs the next year to the great Tom Steels – a very strong result.
For reasons external to the race to finish second was perhaps the biggest disappointment of my career.

PEZ: Your partnership with Kirsipuu was very successful.
Jaan is a great champion, we got along very well and he’s still a friend to this day. 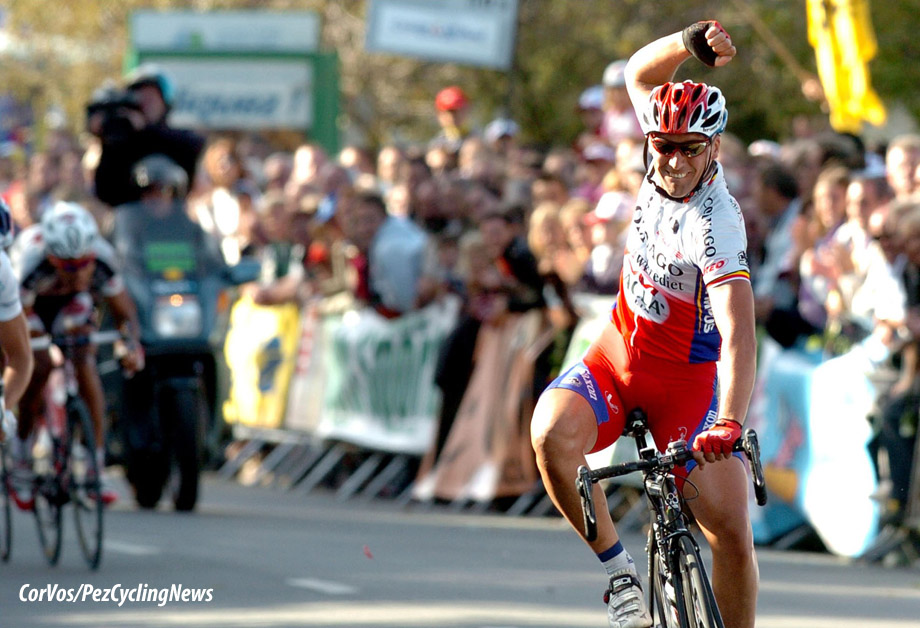 PEZ: Why go to Landbouwkrediet-Colnago?
The French mentality is different to the Belgian and I chose to go back to Belgium with a program more suited to me.

PEZ: You won the Scheldeprijs in ’03 – that’s a big race to win, with Jaan Kirsipuu in second place. . .
I had a great team around me: Yaroslav Popovych, Tom Steels Steels, Ludo Dierckxsens. . . Landboukrediet from Belgian and Italian bikes from Colnago – that was a top team. 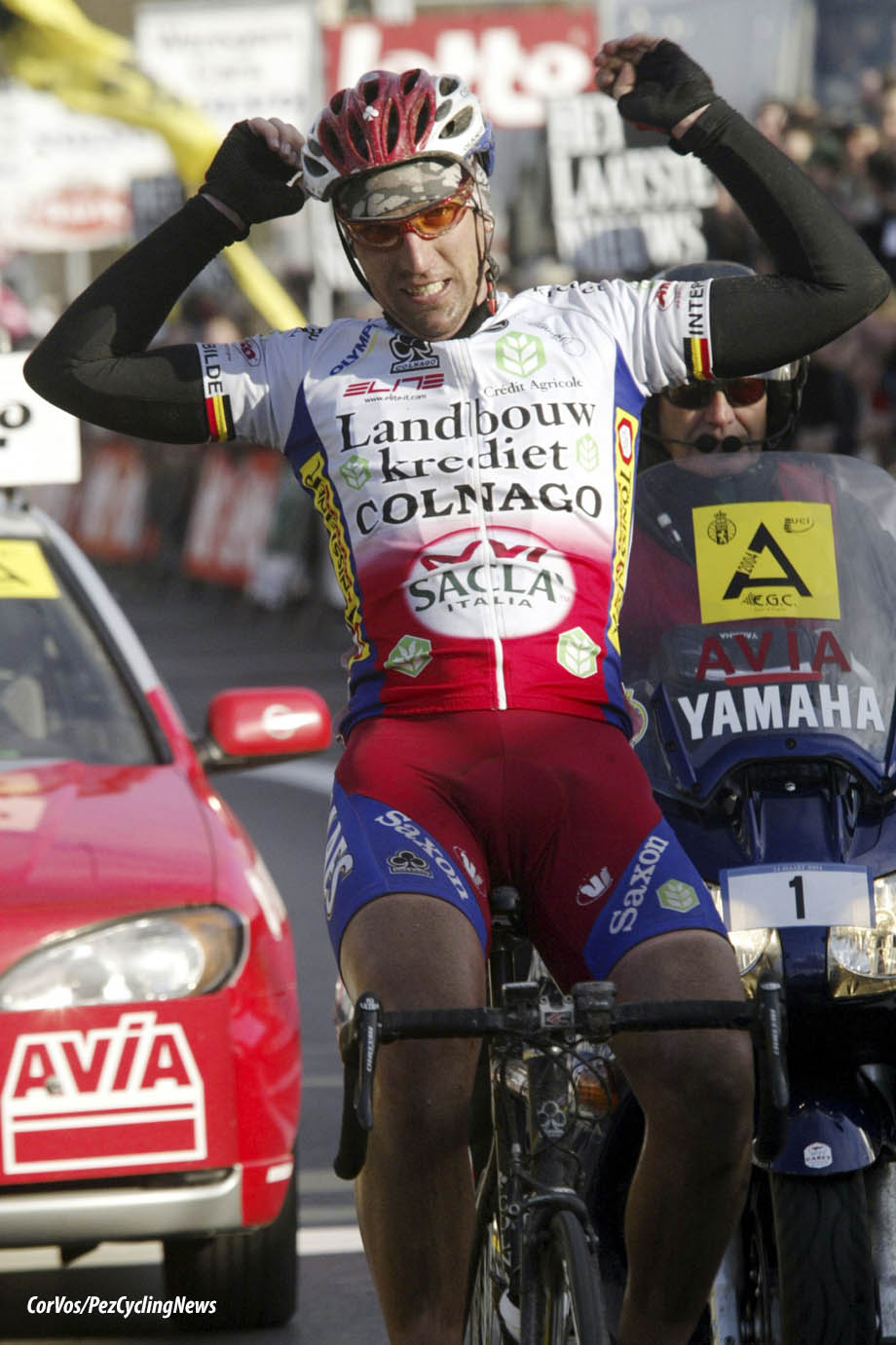 PEZ: Then in 2004 you won Dwars door and Isbergues, two great victories.
Yes; Jaan Kirsipuu was also second at Waregem in Dwars door; that remains in my eyes my greatest victory. Jaan twice second in two of my best wins – a coincidence? It wasn’t just a friendship between him and I.

PEZ: Your problem with the authorities, this must have been bad for your morale?
Yes, because, it wasn’t me who was at fault. It’s not just or fair that people’s rights are handled differently in sport that in ‘real’ life. But it was also a rewarding experience in life because I won this fight. 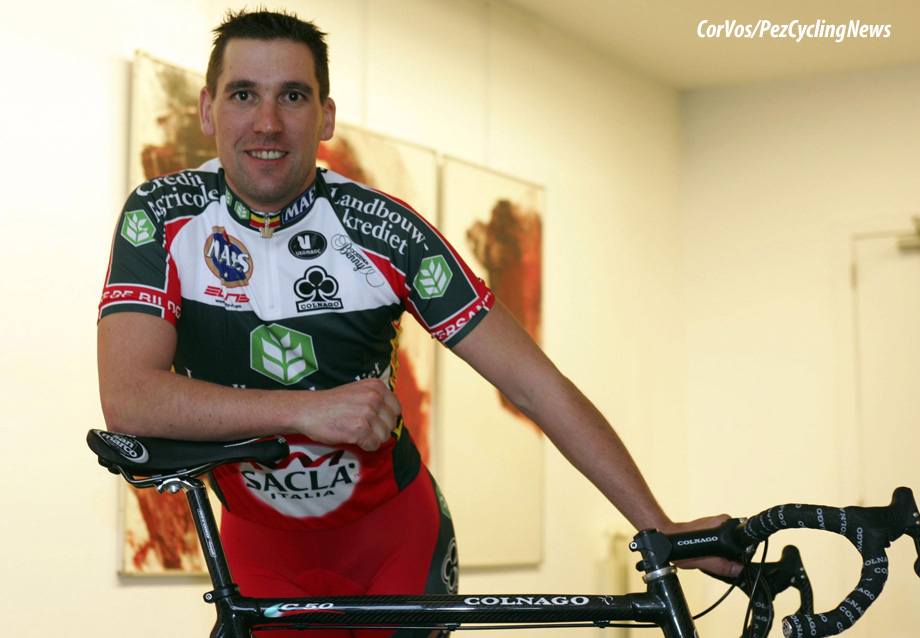 PEZ: Back with in the peloton with Roubaix Lille Metropole – what was that experience like?
I wanted to come back as a professional after my troubles. Monsieur Cyrille Guimard gave me this chance but unfortunately when I got back to a level where I was going well I was the victim of a broken collarbone. That day in my head the circle of my career as a big winner was closed. But my thanks to Roubaix Lille Métropole, teams like them must continue to exist.

PEZ: Then you rode for Rietuma Banka Riga in 2008 – that must have been ‘different’ ?
Yes, my old friend Jaan Kirsipuu was sports director, he came to me and put me back in the saddle. I worked for young people like Aleksejs Saramotins; that was my role to mentor the up and coming guys. I have great memories of my time with them – it was a nice program with good guys working together. 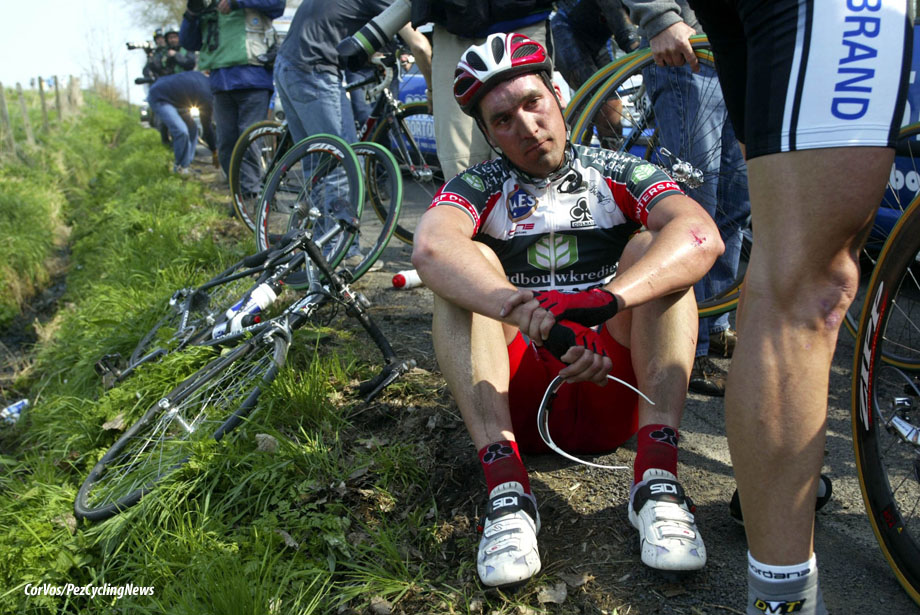 PEZ: Then the Differdange team for 2009, racing in Morocco, the Baltic States, Cameroon – a cosmopolitan programme!
The same role, mentoring the young guys, and I thank them for my time there; I’d been through difficult family circumstances. The General Manager Gabriel Gatti came to put me back in the saddle. Sport is an excellent doctor. Racing abroad and seeing other continents is one thing with unforgettable images but you realise that you have everything to be happy about at home.

PEZ: What did you do after you stopped racing?
I rode an amateur year, but I was bored. I started getting into triathlon – I did eight ‘Ironman’ events. My next Triathlon is in late September – that’s if it with takes place with the health crisis we are experiencing. . . 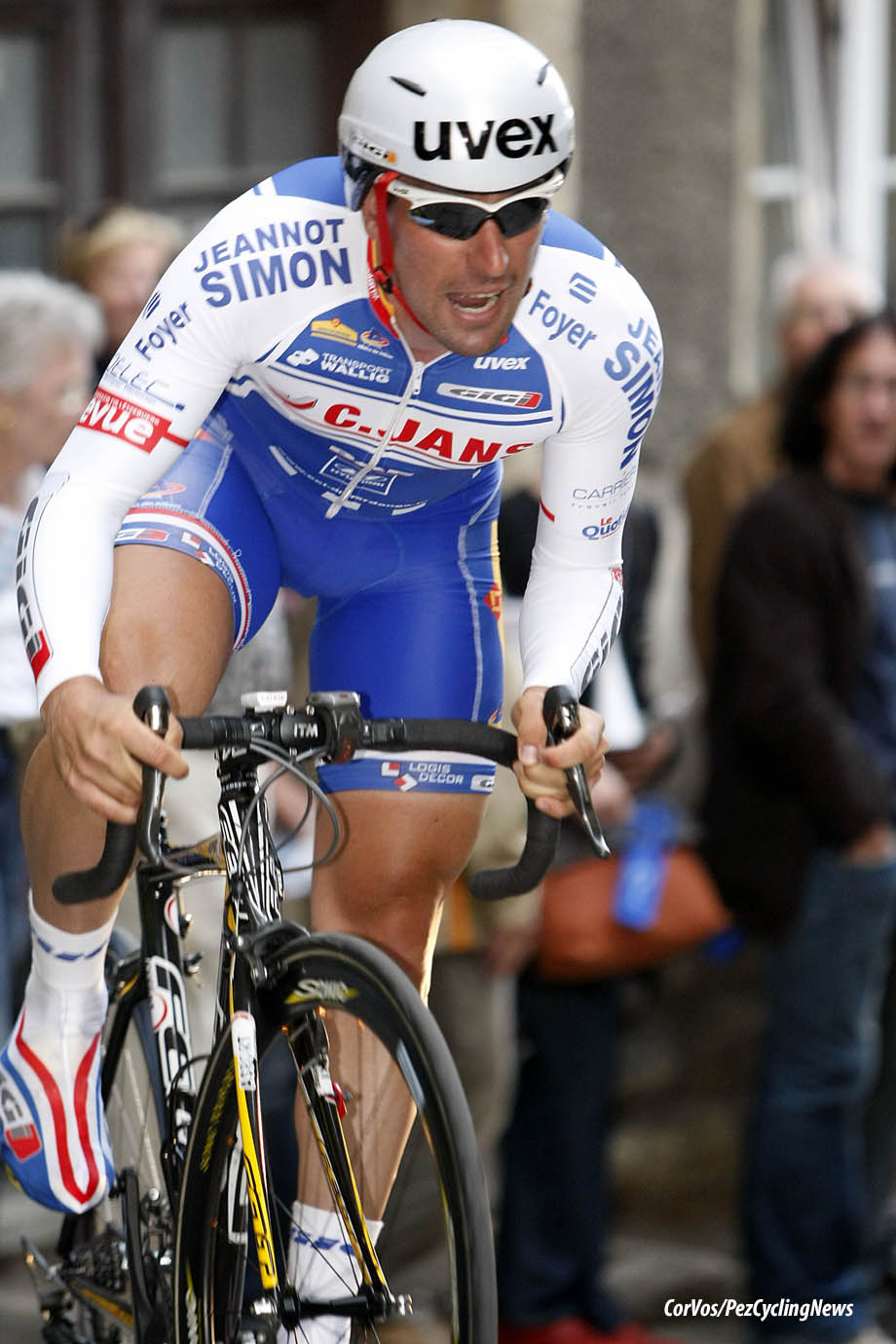 In the 2009 Tour de Luxembourg with CT Differdange

PEZ: Are you happy with your how career went?
Yes, totally. I wouldn’t change anything if I had to do it again. I love biking and that’s my only motivation for pedalling 10,000 kilometres this year – not bad for a retiree. I have no regrets, and always remain a fan of cycling. 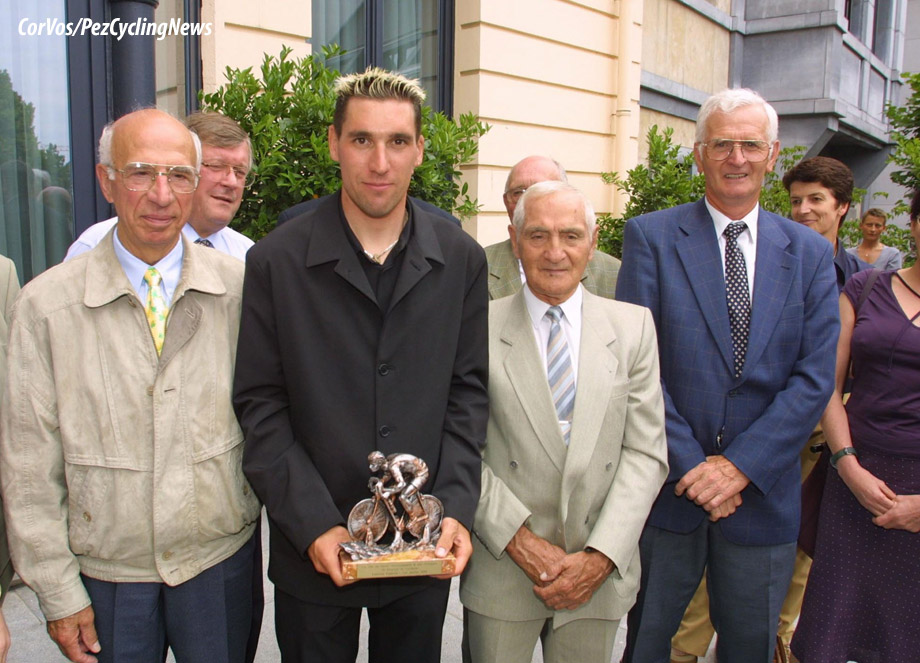