We caught up with legendary TV commentator, Phil Liggett, for a quick review of the 2004 season and an outlook for 2005. Phil was happy to divulge his Top Five Cycling Moments of the year. Unsurprisingly Armstrong’s sixth straight TDF win was in there but, surprisingly, he predicts that Armstrong will NOT be going for a seventh…

When I spoke to Phil he was in the South African ‘bush’ a few miles from the border of Mozambique enjoying the sunshine and trying to avoid being bitten by too many bugs – a few thousand miles physically and a million miles philosophically from Alpe d’Huez in July. It wasn’t long before we were reminiscing about the season past but before we get in to the nitty gritty, I have to say this guy has it nailed – he spends the summer following the European pros around with the odd trip back to Blighty and then when the frost sets in he’s off to the other side of the World, firstly to South Africa where he’ll stay until early January before jetting back to the U.K. then straight out to Oz to pick up the racing season down under – ‘avoid the winter’ he told me.

But without further adieu – here are Phil’s TOP 5 OUTSTANDING MOMENTS of 2005 (in no particular order):

1. Lance Armstrong’s Domination of the Tour de France
Phil Sez: “The reason I chose this is that this year I thought he’d have a rough ride. I don’t think he had to worry about Kloden, although he finished second. Lance made his point on that second stage win by getting rid of Basso who he was worried about. He also had a brilliant team. To win at Alpe d’Huez where he wanted to win was also a crowning glory. Rumours were he rode up that mountain thirteen times but I think that’s rubbish – but he certainly probably climbed that mountain five times. He knew every corner and that was a big difference.” 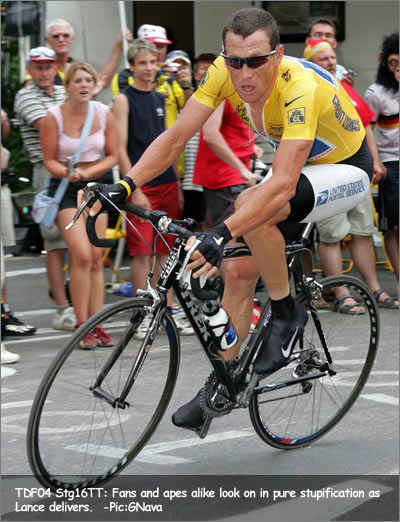 PEZ: I then asked Phil if he thought Lance would be going for a seventh Tour de France victory next year and surprisingly he said:

Phil Sez: “I don’t think he will personally. I’ve always thought from day one that he’d make a decision in April. I know Lance very well, although he’s never made any comment to me or given any answer on this so I’ve got no advantage on this over anybody else. I thought he’d possibly make a decision in April although they’re reporting that he won’t make a decision until May. Now in my book Lance doesn’t make decisions in May for the Tour de France in July so I think he’ll look for Classics and if his Classics season doesn’t work out you’ll find him in the Tour of Italy. But I’ve just got the feeling he won’t ride the Tour de France.”

PEZ: I put it to Phil that surely the Big Blue’s new sponsor would have stipulated that he’d ride…

Phil Sez: “One would presume that when Discovery signed, the contract said that Lance would ride the Tour de France but nobody knows. One thing’s for sure – Lance will announce his decision in April or May but he’ll have made it in December. I just think he wants to do something different before he feels he’s got too old to do it. He would like to ride the Tour of Italy. But it’s all my opinion.’ 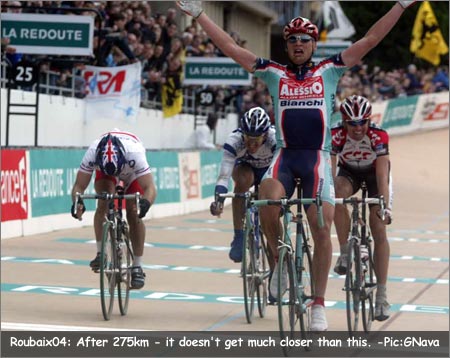 Phil Sez: “It was an excellent Classic and it was so nice to see, well, almost two British guys (almost in that Magnus Backstedt lives in Wales and is married to a Welsh lady) do so well. I wanted Roger to win as he’d had such a great season this year; he’s such a consistent bike rider – he’s always in the top ten. He was well loved by his team for his consistency – he was probably their best rider overall. And I’m glad he’s earned his place on Discovery alongside Lance and whether he can have his freedom to try and win Paris-Roubaix I’m not quite sure now – he may be committed to ride with George – but we’ll see. But I was so happy he got that ride out of his legs. In fairness I was unbiased in my commentary. I’d have liked to have seen Roger win but I was happy to see Magnus do it instead.”

3. Damiano Cunego’s Ascent in the Giro and Lombardy
And on this year’s sensation, the little Italian pocket-rocket, Phil had this to say: 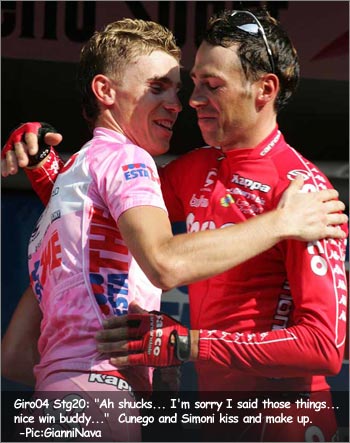 Phil Sez: “Last year I was commentating (on the Giro) and we hardly saw him. He was the youngest rider in the race and he always looked happy on the podium with the Saeco team. He finished the Tour (of Italy) at only twenty-one. (This year) watching his form build as he got closer to the Giro I thought ‘christ – this guy is going to be something in the Tour – how’s he going to get on with Simoni?’ because Simoni would be the automatic choice once the Tour got under way. Cunego was just too good and Simoni just had no answer to him. He’s showed us he can ride and win any which way he wants. He can attack in the mountains, he can sprint and he can ride on his own. This guy’s got real class.”

4. Britain’s Domination On The Track in Athens, and the Great Ride by Liam Killeen in the MTB event

Phil Sez: “I went to the Athens Olympics feeling that I really didn’t want to be there after the Tour de France as I wasn’t expecting a great games but to the contrary it was a great games. The Greeks did a fantastic job the venues where superb. The British team did everything I expected of them but if anything they could have got even more out. They flopped in the kilo and in the points race but they came up trumps in all the other events. We know when they got on the bikes they were there to win.”

PEZ: But Phil was most inspired by a ride of the knobbly tired variety where Britain’s young star, Liam Killeen, but in a storming ride after hitting the deck shortly after the start.

Phil Sez: “The best individual ride for me was Liam Killeen. We never saw that rider recover from his crash until he crossed the line in fifth place. But watching the lap times you could see him close. I think he was eighteenth by the end of the first lap but by the end of the last lap he was up to seventh or eighth and he came home in fifth place. Liam Killeen without a problem would have taken a medal on the day.”

5. Paulo Bettini’s Gold in Athens and His Third Straight World Cup Win
Phil Sez: ‘It’s not often the favourite wins a bike race and very rare an Olympic title. He was very shocked by Paulinho – he didn’t know who the hell was on his wheel when he looked round with one lap to go. I was glad it worked out for him as he’s been the most consistent bike rider for about the last three years and you know now completed the treble in the World Cup – the Gold was a just reward for him.”

Thanks to Phil – and a we’ll be watching closely to see if your predictions come true!