For a while last year, it looked like his inspired solo break was going to be the move of the day; he’s ridden the race half a dozen times – who better to ask about Het Volk than Belgium’s Big Bert Roesems (Silence-Lotto)? We didn’t pick the best time to talk to big guy from Halle: he’d just abandoned a wet and wild Tour of the Algarve; the injuries sustained in a horrific crash in last years Vuelta not healing perhaps as quickly as he would like.

PEZ: Tell us about that crash, Bert.
Bert: It was the stage into Saragossa with 20 – 25 kilometres to go, I was at the front trying to keep out of trouble because it was so windy. Some guys tried to move up, they locked handlebars and came down, they took the guy beside me down and he brought me down, I was thrown in the air and landed very heavily on my left side.

I broke my pelvic and pubic bones in the fall, the fractures healed well but there are large muscle groups around those bones which have wasted away because I had to spend two months lying down to let the breaks heal, it’s not just a couple of muscles, rather a whole group, it will just take time.

PEZ: How is the road to recovery going?
Bert: Not so good, I didn’t finish today (stage 3), there were a lot of ups and downs today and it was just a little too much for me; my general condition is good but the muscle that I lost is taking longer than I expected to rebuild. 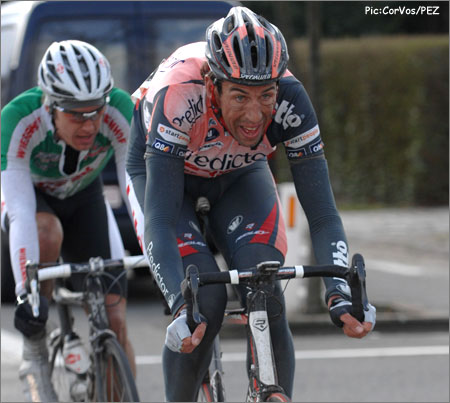 Bert had himself a good ol time off the front in last year’s race.

PEZ: Het Volk – why is it such a big deal to the Belgian Public?
Bert: It’s the first Belgian pro race of the year, the ‘crosses are finished, the spring is just around the corner and the fans are keen to see the big riders in action. The parcours are like a ‘mini’ Tour of Flanders, so the race is an indicator of who will go well in the Spring Classics; the papers and TV will feature race previews and analysis of the parcours all of this week. 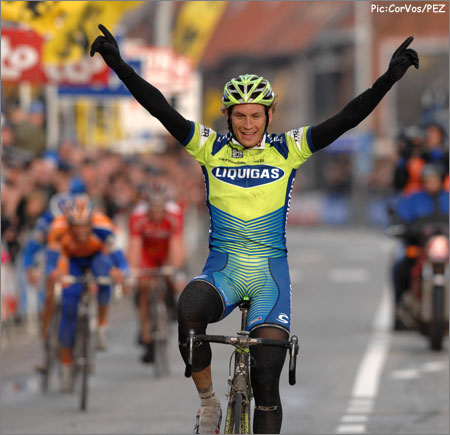 Pippo flung himself to victory with a final kilometer attack that left Boonen, Nuyens, and Flecha looking at each other.

PEZ: It’s a big deal for Belgian riders too, isn’t it?
Bert: Yeah, it’s the first really important race, it’s very popular with the fans and there’s big TV coverage – apart from that it let’s you know whether or not you are ready for the classics.

PEZ: How many times have you ridden it, Bert?
Bert: Six or seven. The first time I rode was 1999 when I was away in a break for 140 kilometres and then last year I was away on my own in the finale but got caught. 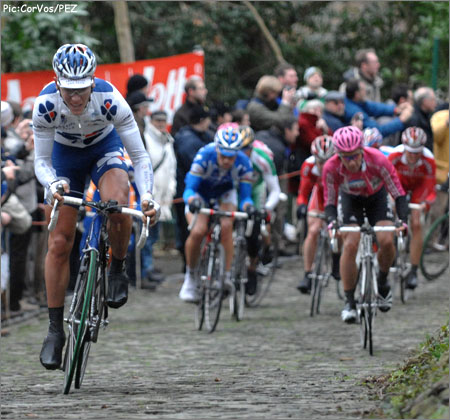 The Muur is a hard point in the race, but not a decider. Philippe Gilbert, however, could well be a deciding factor in the race.

PEZ: New parcours, this year?
Bert: Yes, it’s changed this year and they have brought the finish back into Gent, there’s no Kwaremont or Bosberg, but there’s a new section of pave.However the last 25 kilometres are flat and fast with few difficulties so it looks to me like it could be a sprint from an elite group; but not a bunch. 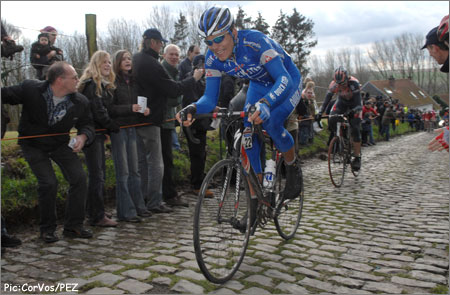 PEZ: How do you ride those bergs (short sharp climbs), Bert?
Bert: Everything is in positioning; if you’re too far from the front you’ll be caught in the splits and it’s very hard to get back up. The biggest fights are coming into the bergs; the climb is the easy part if you get your position right and you’re on a good wheel – the craziness comes on the approach.

If you are at the front your momentum carries you a lot of the way up the hill before you even notice, but if you are in, say 30th position, then you are braking coming into the foot of the climb; if you are the very back then you’ll practically be stationary.

PEZ: And the pave?
Bert: It’s the same thing; it’s all in the positioning. There’s a fight for the best places coming into the cobbled sections, but if you are at the front and have the speed you just float over the top of them. 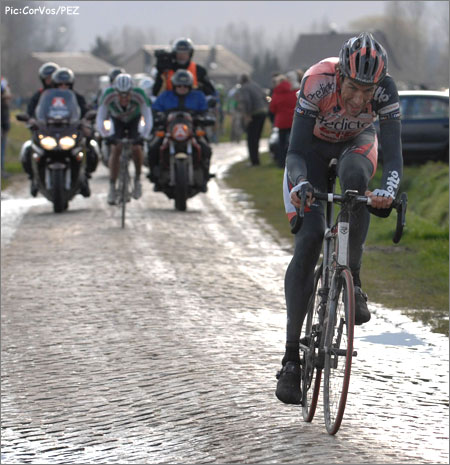 PEZ: Do bordures (echelons) play a part?
Bert: Not really, those are a bigger factor at De Panne and Gent – Wevelgem; Het Volk is on small twisting roads which change direction a lot, this means that the wind doesn’t get as much chance to tear at the bunch.

PEZ: Is there a key moment?
Bert: Near Ronse there’s a string of climbs which come close together and there are cobbled sections around there too, it will be lined-out; if you miss the split there’s no way you can win, especially if one of the big teams – like mine, or QuickStep decide to go on the offensive.

PEZ: Will the new finish change the race?
Bert: I think it will almost definitely mean a bunch sprint between the top guys, there won’t be 100 riders, more like 60 or 70; it will be split coming into that last 25 k, maybe three or four groups, but I think they’ll merge by the finish line. 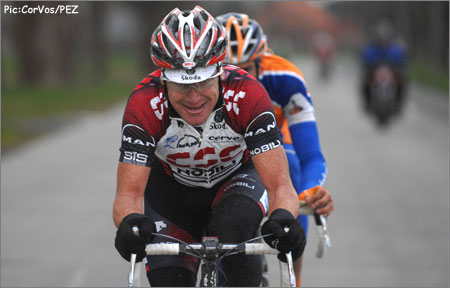 Stuey and Flecha had a handsome go of it last year, but they too were reeled in.

PEZ: What’s the strategy if you want to win?
Bert: If you’re not a sprinter, it’ll be very hard to win, especially if there’s good weather; if it’s raining and windy, then there’s a chance of escaping on your own. Generally though, you have to be in the front groups all the time because it’s a very difficult course to try and come back up.

PEZ: Kuurne-Brussels-Kuurne is next day, why isn’t it as highly rated as Het Volk?
Bert: Kuurne isn’t half as hard as Het Volk, there are less climbs – remember that Het Volk includes 10 of the Tour of Flanders climbs and much of the parcours of the Ronde. The last 50 at Kuurne don’t have major difficulties, so it’s possible to come back – enabling sprinters like Moncassin and Kirsipuu to get back and win.

It’s hard to stay away in the finale at Kuurne if the bunch decides to ride; at Het Volk, because the roads were smaller it was possible to beat the team tactics if you were strong, because of the small twisting roads – but I think this year it will be different with the flat, fast run-in. 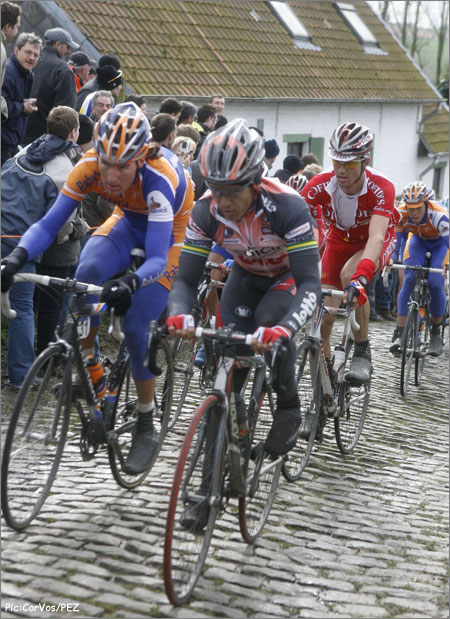 PEZ: Boonen?
Bert: Robbie McEwen! I can assure you that he’s very motivated to win!

It’s not every day you get a tip like that – get to the bookies, now!

PEZ would like to thank Bert for his time – and the tip – and wish him a speedy return to the form that we saw last year in De Panne, where he was the man of the race and stood beside winner Alessandro Ballan on the podium.

Toolbox: 36 Ways to A Faster TT