Bioracer Boss Interview: This week it was announced that the INEOS Grenadiers team would be swapping their clothing supplier from the Italian manufacturer Castelli to the Belgian Bioracer company. Ed Hood caught up with Raymond Vanstraelen, the man behind Bioracer – More than just a cycle clothing manufacturer. 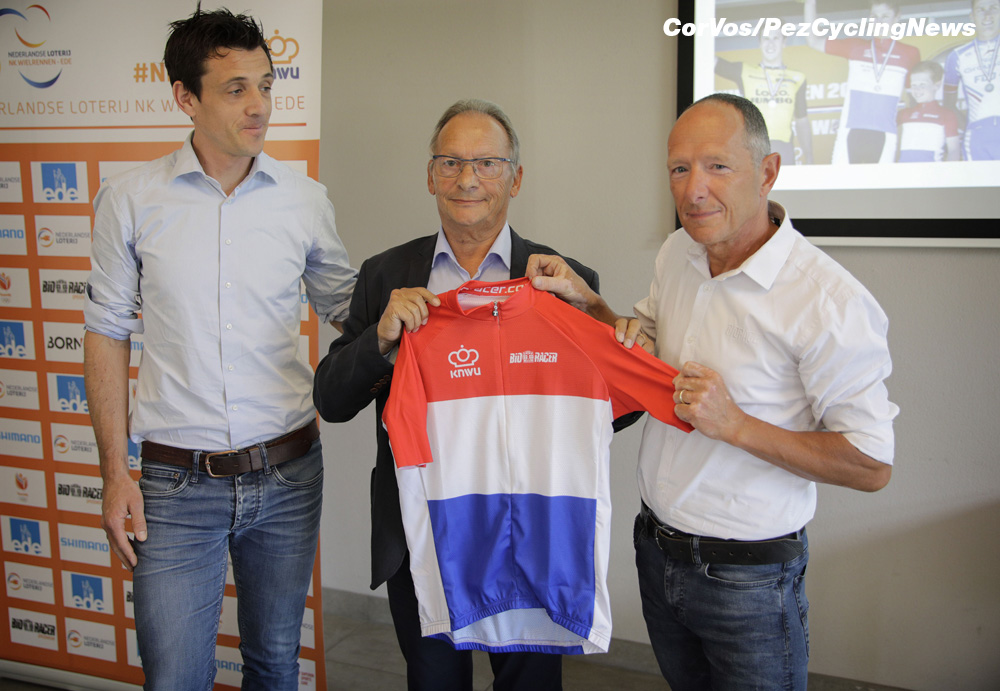 With the news that the mighty INEOS Grenadiers will ride Bioracer clothing from 2022 for at least three seasons we thought it was time to introduce you to the innovator who formed the company back in the 80’s, Mr. Raymond Vanstraelen – but his search for cycling perfection isn’t just about clothing. . . 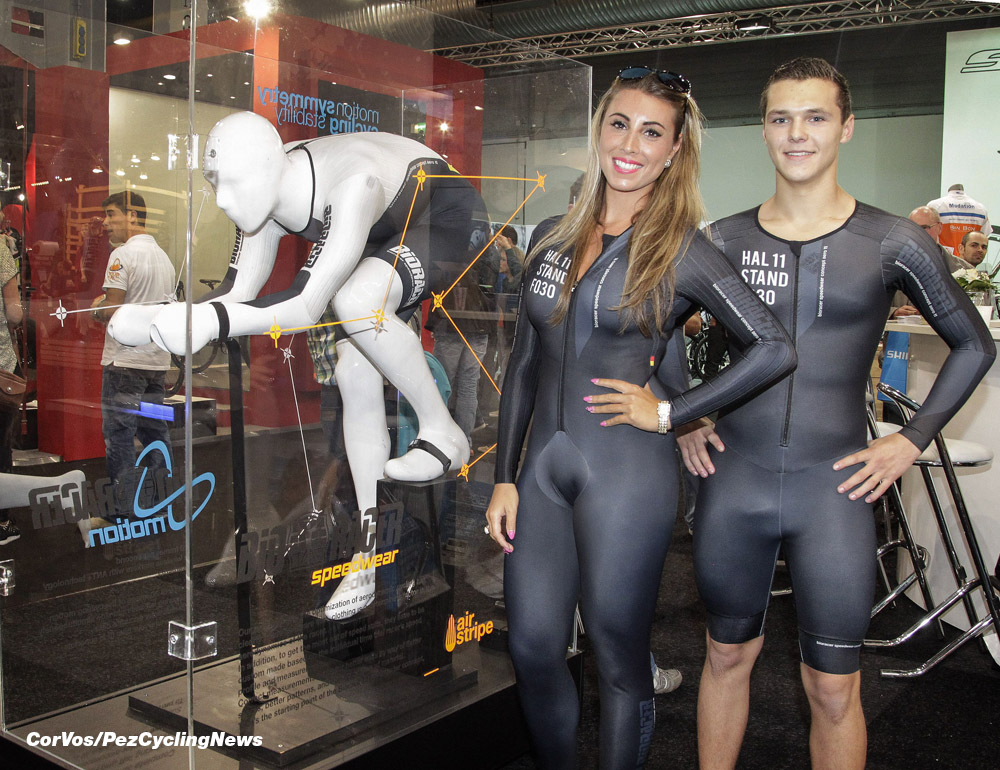 PEZ: You were a good amateur rider in the 60’s and 70’s Raymond, what do you rate as your best win and why did you never turn professional?
Raymond Vanstraelen: I was almost 19 years-old when I started to ride cyclo sportives. It went very well and the following year I took out an official race licence with the Belgian Cycling federation. My best wins were the 1968 championship of Limburg, 1970 Koln Schulz Koln, 1973 Vuelta Ampurdan. Growing up in a working-class family of the post-war period, my parents discouraged me from turning professional and after my studies I took a ‘stable’ job with the State Owned RTT telecoms company. I married at just 22 years-of-age, and soon had a young son. But the fire for racing my bike was still within me, and alongside a full-time job and a young family I competed throughout my twenties. 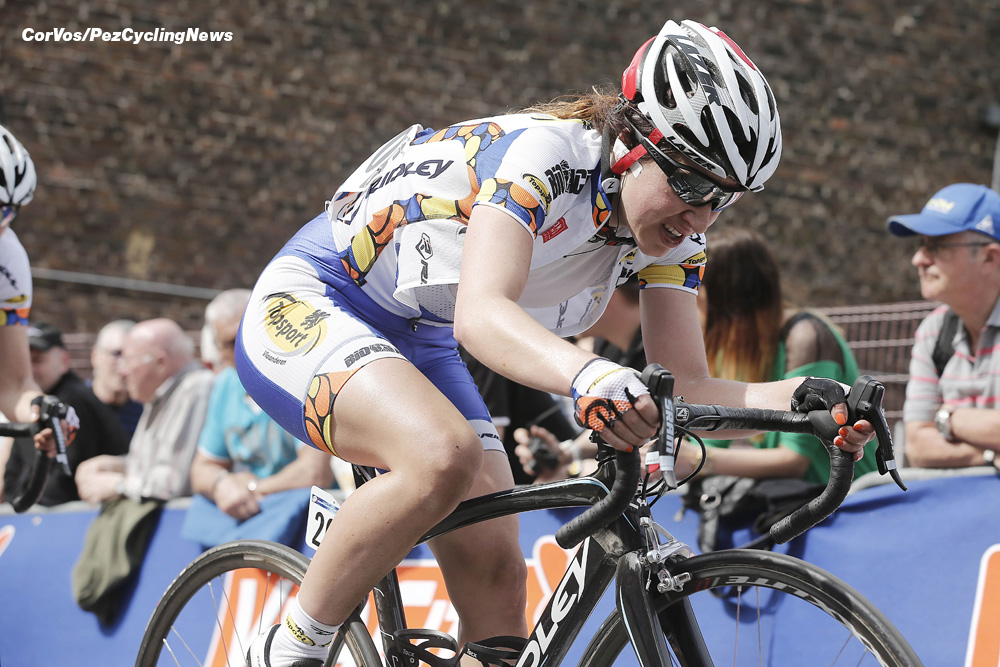 PEZ: The company’s roots go back to 1986, tell us about what happened that year?
As an amateur cyclist and cycling coach and later as a soigneur, I was always looking for new technologies usually from other sports which I applied in cycling. As an employee at the RTT (I was there for 22 years), I made use of opportunities to free up time for my passion. At the end of 1984 I was introduced to the ‘Sport Tester,’ later better known as ‘Polar,’ pulse monitor but it took 10 years for the hype and publicity to peak around the device. I also had a private cycling school with the most famous names of that time including René Martens, Guy Nulens, Johan Capiot and Herman Frison; I bought 20 sport testers for my riders, I was more or less obliged to register for taxation and to start it as a ‘proper’ business. My vision with regard to the rider’s position on the bike resulted in a unique but universal computer measurement system; ‘Bio Racer Bike Fitting.’

At the start it was just for the cyclist in my school. But the concept immediately proved it’s value when top cyclists after a victory said they owed their success to their new position on the bike. The measuring system has become the norm in the professional peloton and for the experienced and competitive cyclist. With this knowledge, we developed a new cycling shoe, which was the basis for the present generation cycling shoes, we made custom bike frames because existing companies could not or would not, and we were among the first with aluminium frames with Ridley – that company is a spinoff from Bioracer. 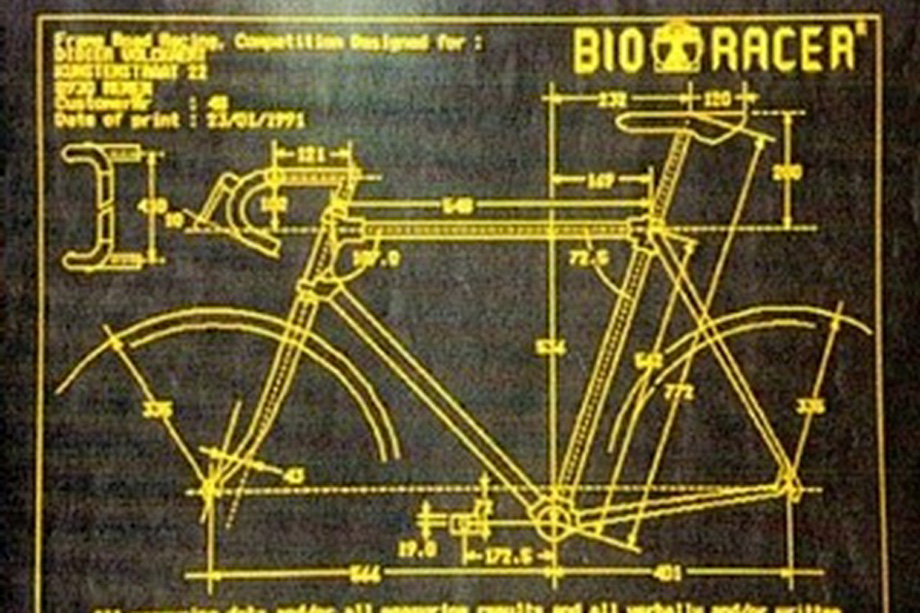 PEZ: Tell us about the name, ‘Bioracer’?
Bio-Racer’s name is derived from Biomechanics and Racer speaks for itself. We digitised the famous drawing by Da Vinci “Man is the measure of all things” and this became our logo.

PEZ: Who was the first rider to win in Bioracer kit and what was the first major success achieved in the clothing.
Paul Herygers 1994 World Champion Cyclo-cross. 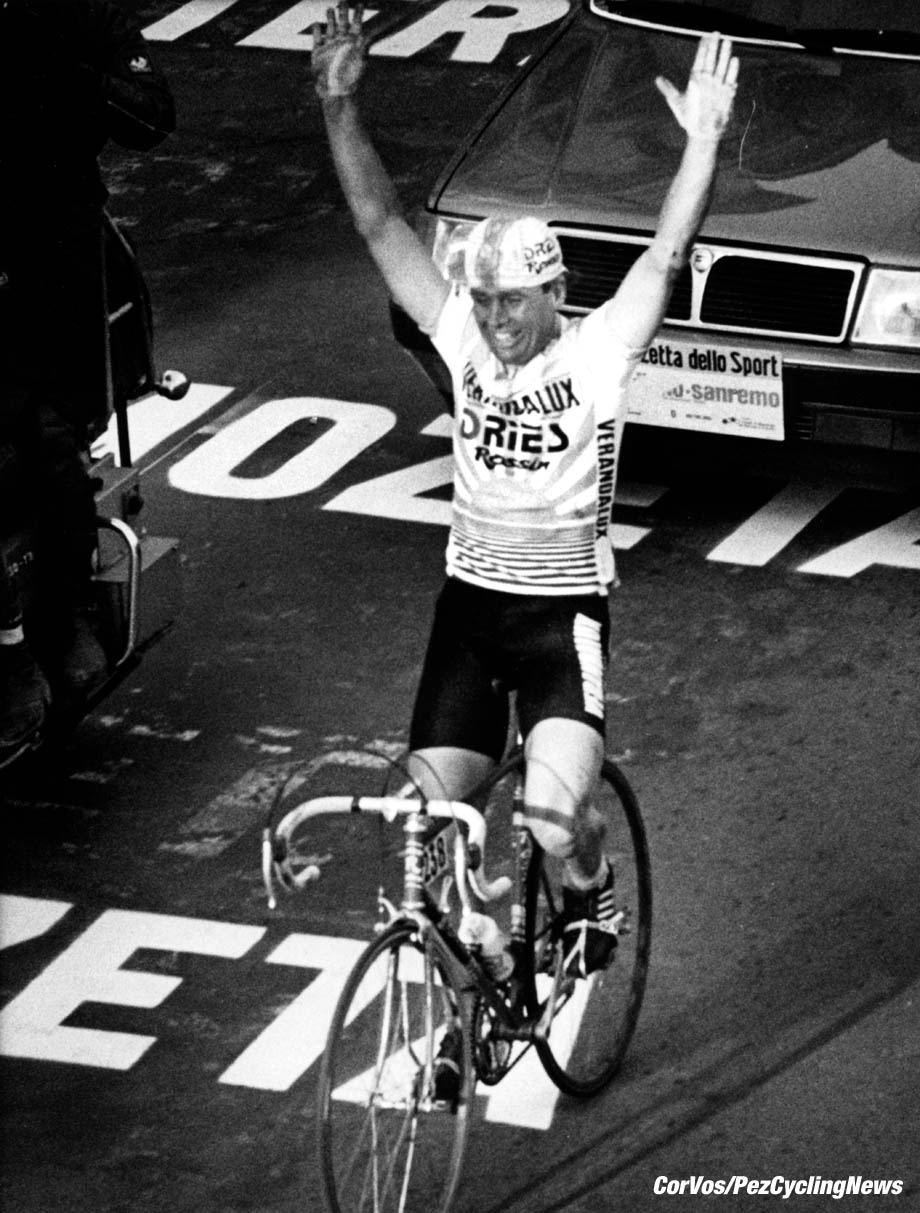 PEZ: I believe you coached Hennie Kuiper after you stopped racing?
I didn’t coach Hennie Kuiper, but he was the first cyclist outside my cycling school who came for a bike fitting session and a few week later won Milan-Sanremo – this was the start for Bioracer Bikefitting. 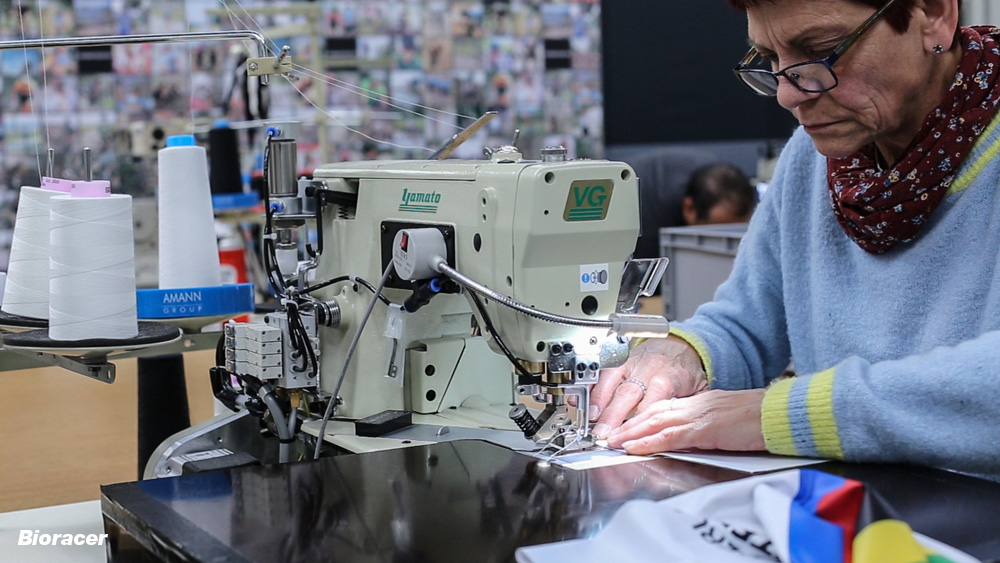 The sowing machine how it all started

PEZ: I believe you started with your wife making garments for your coaching clients?
In 1986-87 I started to become more and more interested in apparel comfort and the effects of clothing upon performance. I studied what was happening in the world of downhill skiing visiting Switzerland to learn about a new wonder fabric called Lycra invented by the DuPont company. This led to experiments with cycling apparel designs – which were made at home by my wife Anny Vanaken – which were lighter, more elastic, and breathable. The clothing was hugely popular with the riders I was coaching, and demand soared. Throughout the first half of the 1980s I was running Bioracer alongside my full-time job at the RTT. But in 1988 at the age of 40, my wife Anny and I decided to take a leap of faith and focus on the company full-time. We soon realised the potential for Bioracer cycling apparel. I was responsible for design, testing and sales, Anny took care of production on her two Singer sewing machines in a spare room at home. Three of the Belgian riders coached by me were competing with the Peter Post’s famous Panasonic Isostar Pro Team, and they introduced Bioracer to team management who contracted us as their apparel supplier. 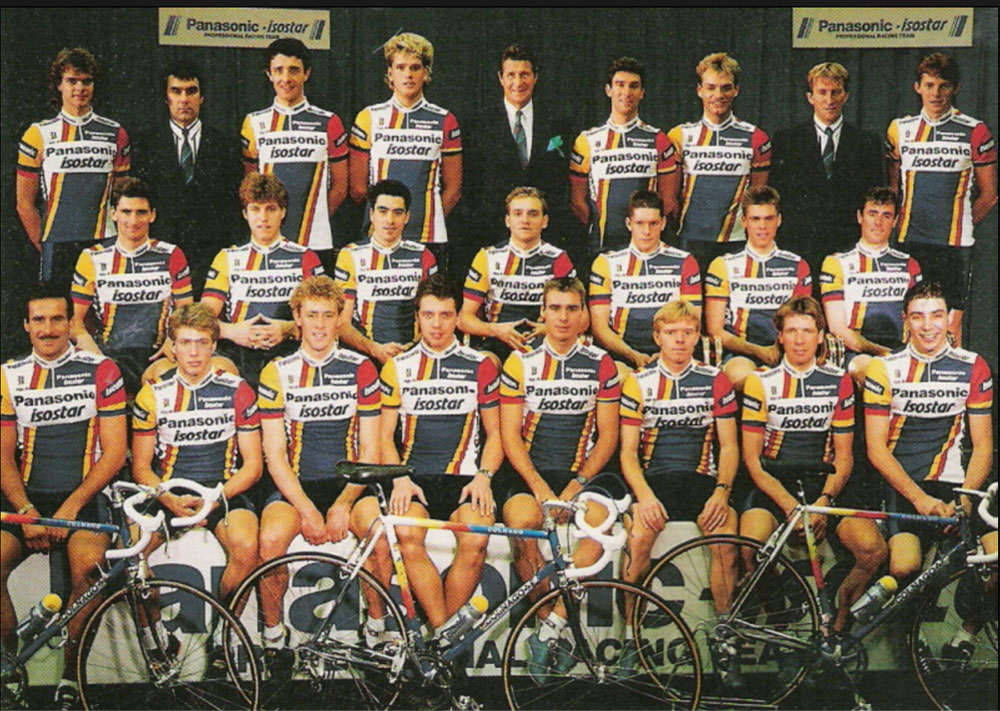 The Panasonic Isostar team in Bioracer made kit

PEZ: Going back to bike fit, what’s your philosophy on it?
In the mid-1970s I worked together with a colleague at the RTT to develop the world’s first ever computer program for bike fitting. I recognised that many riders were having knee problems, something that my research from hands-on coaching linked to a combination of overly steep frame angles, too low saddle heights and poor fitting cycling shoes. So I took an integrated approach – developing individualised and integrated ‘systems’ for the riders that I was coaching. This involved working with frame builders to create truly made-to-measure bicycles, raising average saddle heights by two to three cm. and creating bespoke insoles that were a radical departure from the flat-soled cycling footwear of the time. This complete vision regarding the positioning on the bike evolved into a unique but universal measuring system – using newly emerging computer technology. 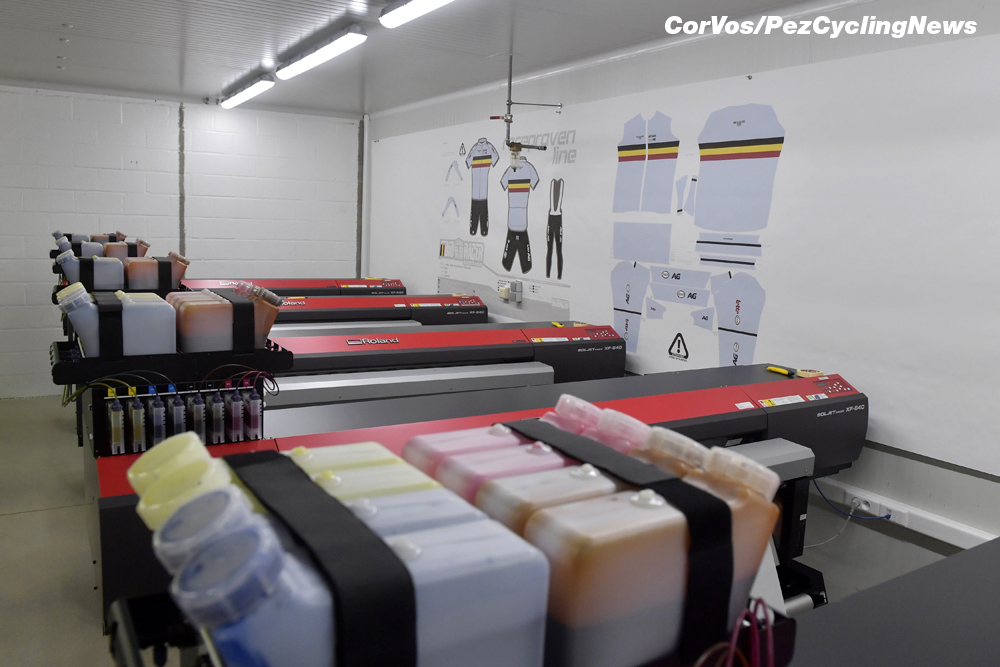 The factory making the Belgian kit

PEZ: The clothing contract with the Belgian Federation; 27 years and still with you – impressive.
With the national team you cover everything, ladies, men all aspects of bike racing competition. But most important are the Olympic Games, where only the name of the clothing supplier may appear on the clothing. At the Olympiad in London there were 12 medals for us and in Rio de Janeiro also 12 medals including four gold for riders with Bioracer clothing. With Bioracer clothing we have accrued almost 1000 World Championship and Olympic victories, including names such as: Tom Boonen, Philip Gilbert, Greg Van Avermaet, Wout Van Aert, Remco Evenepoel, Mathieu Van Der Poel, Tony Martin, Marianne Vos, Annimiek Van Vleuten, Anna Van Der Breggen, Jolien D’hoore and many more. 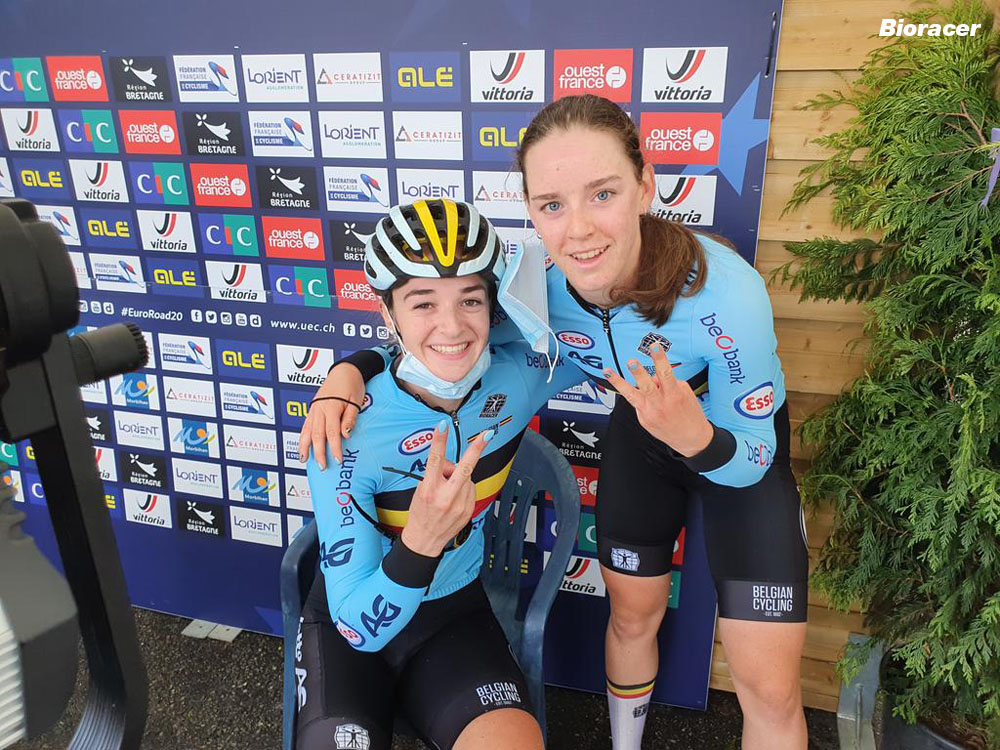 PEZ: Which professional teams do you supply currently?
The national teams of Belgium, Netherlands, Germany. Belgium for 27 years, Netherlands for 26 year and Germany for 15 years. On the World Tour, Team DSM and at ProTeam level, Uno-X Pro Cycling Team. 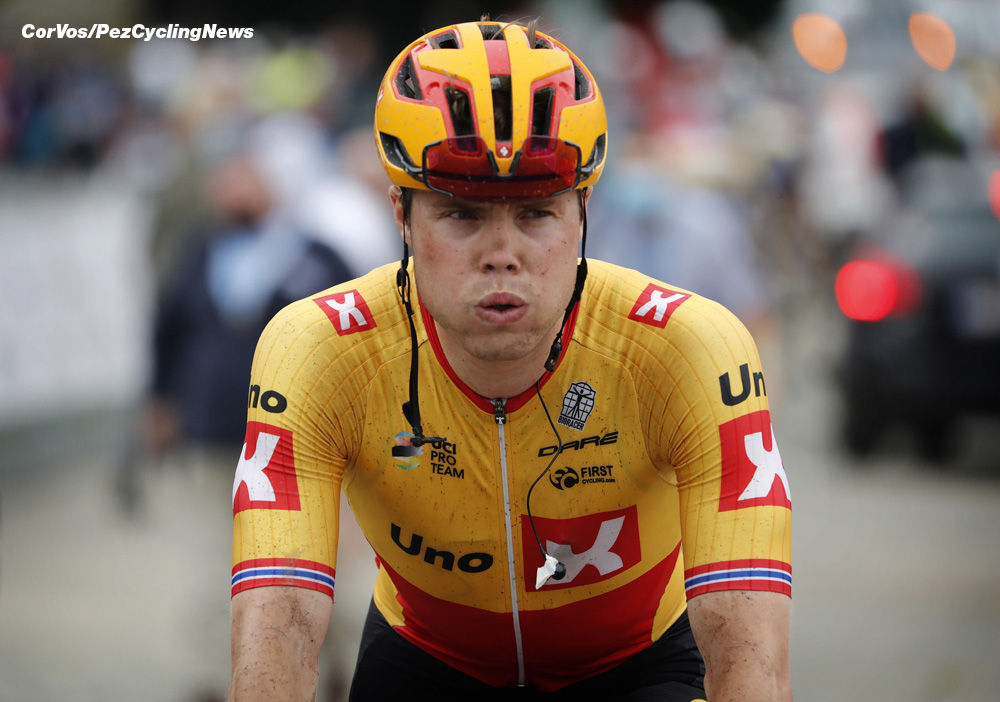 PEZ: Tell us about the Ineos deal.
Sir David Brailsford is a real gentleman who has a very strong performance team behind him. In the past with Sky we have made the time trial speedsuits for them, to the great satisfaction of the cyclists who wore them; notably with Vasil Kiryienka as world champion time trial champion. Their team statement will say: ‘From 2022 the team will race in Bioracer kit as part of a new exciting Performance Apparel partnership. We’re extremely excited to about Bioracer’s expertise in both speedwear and custom fit and are looking forward to welcoming the Bioracer family into the team. More details will follow later in the year.’ The duration is three years with an option for renewal. 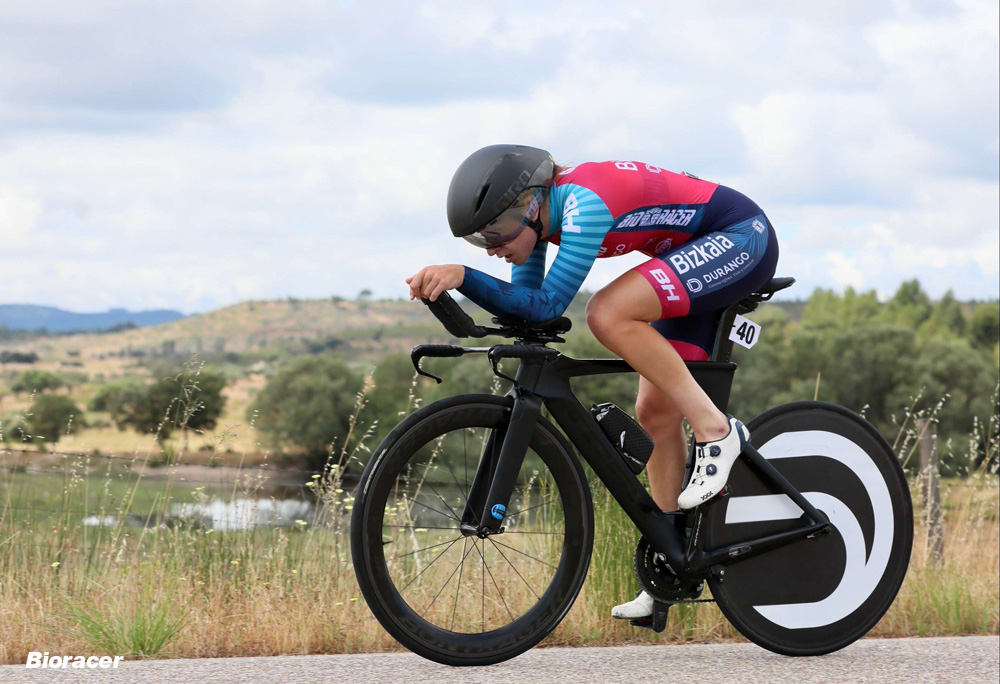 PEZ: The ‘aero’ aspect is so important now, how do you keep abreast of developments – and how do you keep up with the ever-changing UCi regulations for clothing?
I increasingly came to understand that speed and performance of a cyclist depended on various factors including biodynamics and aerodynamics – which can’t be considered in isolation. As a partner of three national teams with world’s best riders, we are constantly challenged to develop products that give a competitive edge. It’s in our DNA to innovate with passion and make athletes faster. We do this by creating new fabrics, materials, accessories, production methods, systems, patterns and lots of testing. The athletes are always central in our philosophy, we maximise their potential. A fast speed suit can give a benefit of one sec/km compared to a standard suit. All the Bioracer time trial athletes are racing a tailor made suit for their specific speed zone and body shape positions. We continually push the edge of innovation and technology. Whether riding for fun or competing at the highest level, our constant research and analysis ensures that whatever your speed is, it is enhanced by performance textiles, optimised fit and detailed finish to make your ride comfortable and efficient. 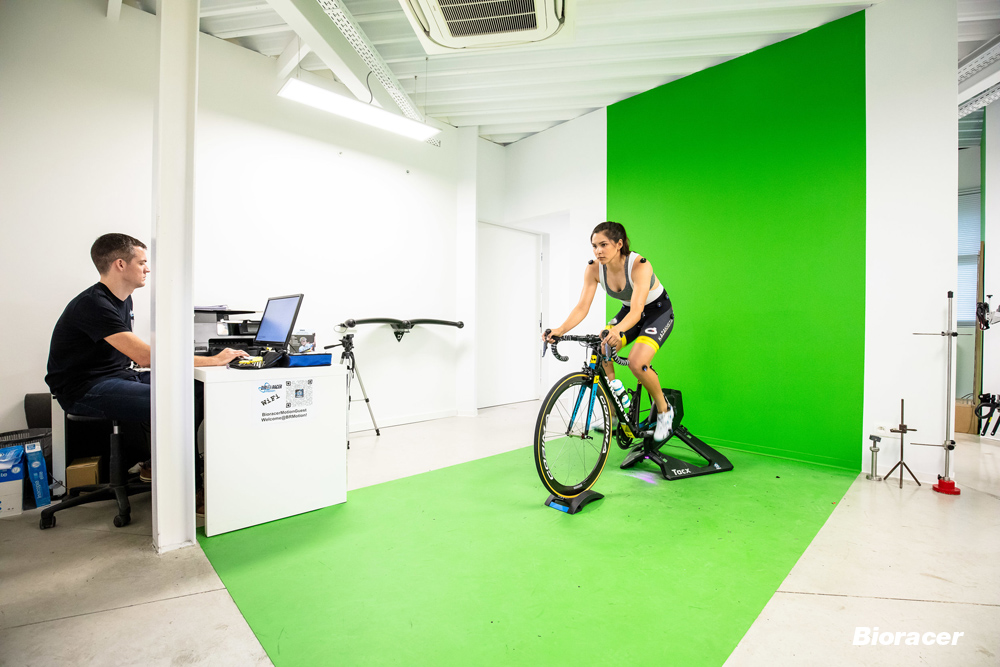 The PROTOLAB in collaboration with our SPEED CENTER and TEXTILE STUDIO delivers constant innovation through research and development of patterning, fit, and construction to construct future-forward concepts and cycling speed wear that we manufacture in our owned facilities.

PEZ: You work with some big names in the sport.
We work for a lot of the best professional cyclist in the world, for bike fitting, aerodynamics, the innersoles for their shoes and other aspects. The problem is that Bioracer is a competitor of the brands their team might be sponsored by. My philosophy is that I never approach a cyclist; they come to me for a service, the inner circle of pros know it and it makes me proud – maybe it’s not the best way for the company’s recognition but it means we score highly on credibility and confidence. 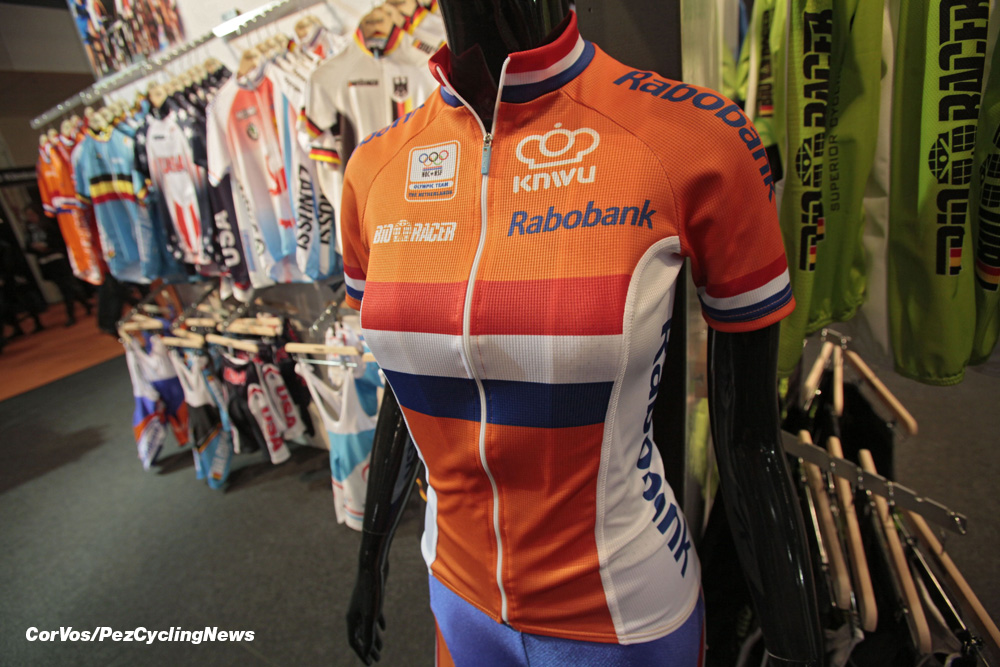 PEZ: The Future?
We’re well known in Europe and now we’re set to go to North and South America and Asia to make Bioracer a brand they love there too.

Bioracer – Clothing for everyone