George Hincapie: a strong man in the classics, a guy you want on your team at the Tour, and after all his years with the pros he’s still friendly and approachable, and looking thinner and fitter than ever… No surprise what his aims are for this season: Flanders & Roubaix and yet another Tour de France start (again!).

We talked with George at the January BMC training camp in Spain.

PEZ: You’ve been a Pro for so many years now, were does the motivation come from?
George Hincapie: I always dreamed of being a professional cyclist 30 years ago and to this day I don’t take it for granted. As long as I can race I want to be the best that I can be, that means working hard and to be the best team mate I can. There are a lot of young exciting talents in the team this year and I hope I can help them. I’m really looking forward to see how I ride this year and how the team will ride. 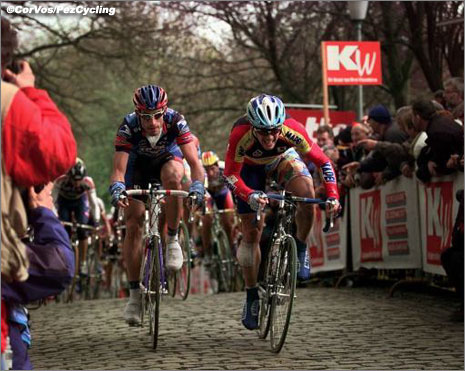 A young George Hincapie on the Kemmelberg.

PEZ: Can you tell us how you felt about the day you didn’t get the yellow jersey?
George: Yea well I was angry, I was very angry about it, but I was caught in the middle of a battle between two American teams, it was very important to me. It hasn’t changed me in any way, I’m proud of the fact that I believe I’m very well respected in the peloton and I think everyone likes me, that’s the way I try to live my life. I don’t try to make enemies, but if someone crosses me, then I definitely don’t go out of my way. 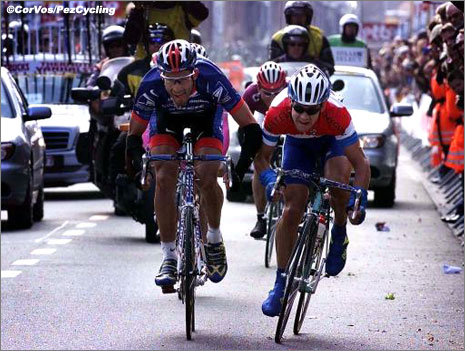 Taking the win by millimeters at Gent-Wevelgem.

PEZ: What are you ambitions for this year’s Tour?
George: I still feel really good, I think, this year I’m feeling better than ever, in January. I know as I get older that my chances are less and less for winning races, on good days I can still ride with the best and on a bad day I’m OK, probably still better than most people. So for me to go to the Tour de France I have to be realistic, I know I have to get in the lucky break away and use my experience to try and win a stage, if that happens that would be wonderful, but my main job is to help Cadel, getting him on the podium would be better. 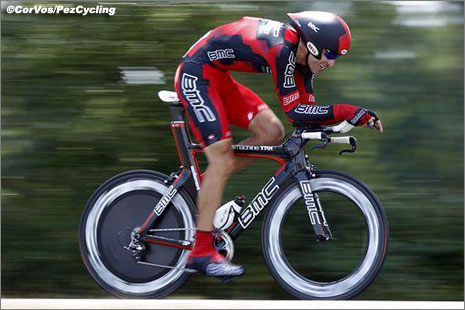 PEZ: What about the team in the Classics?
George: We’ve got (Marcus) Burghardt, Greg Van Avermaet, Karsten Kroon in there, and many of these guys have been in the top ten in many classics, or won them. And we will see how Taylor goes. So for me I’m just excited about being part of that team and on that day, if I’m the best guy I’ll have a good chance of winning the race with these guys behind me. Or if they are better than me, then if the team wins I’ll be happy. 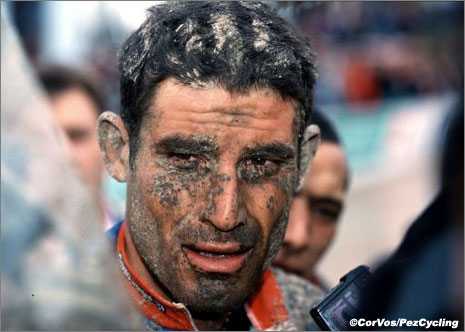 PEZ: Has there ever been a point in your career when you have thought: “I’ve had enough”?
George: Yea, many times! Last year when I crashed in Belgium two times in 200 metres, I was thinking “what am I doing?” if there is anything about how great our sport is; that I feel I’m lucky to have been around for so long and I’ve been able to make a life, a good life out of it, I met my wife through the sport, I’ve made a tremendous amount of friends and relationships I wouldn’t trade for anything. So the sport has given a lot to me and I’m just not ready to leave it right now. 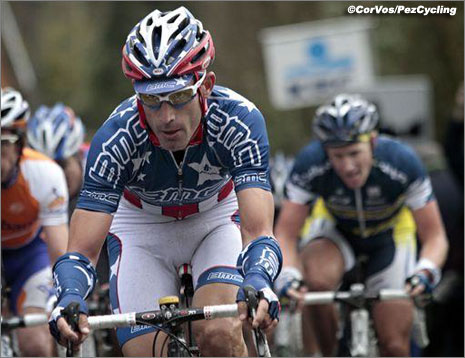 PEZ: What would you say has been the biggest change in the sport, also with the drug situation?
George: There is definitely more drug testing going on and I believe our sport is at the pinnacle of all sports for drug testing and I’m proud of what of what it is doing. Definitely there are going to be positive tests out there, there are still people who take the risk, but that’s part of life. Also I think technology has changed a lot, now you have power meters, you have the bikes that are lighter, stronger, faster. The teams have a physician and coaches that know exactly what you are doing, day in and day out. You download your training and now they know if you have skipped a day of training, which is a big difference from ten years ago.

PEZ: Is that a change for the better?
George: For me its fine, I’ve adapted quite well to it. It’s a good thing; it’s all about trying to get the best. The sponsors put a lot of money in to the teams, so they want to get the best they can from the riders. 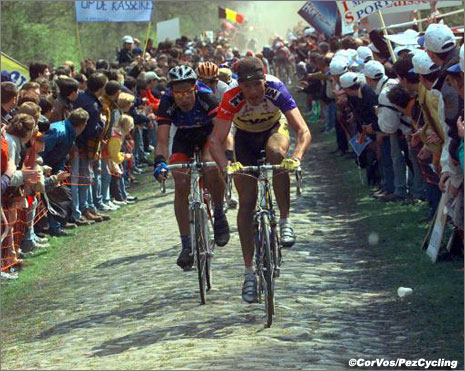 PEZ: You’ve been training a lot with Chris Butler, because he lives near you, do you have a tutor/student relationship role with him?
George: Yea I train with Chris all the time. He has a lot of potential, for instance he has one of the highest Watts per Kilo ratings on the camp, for this time of year he’s quite excited about. He needs to learn to ride in the peloton better and become a better rider on the flat, as far as his climbing goes, he’s definitely World class. 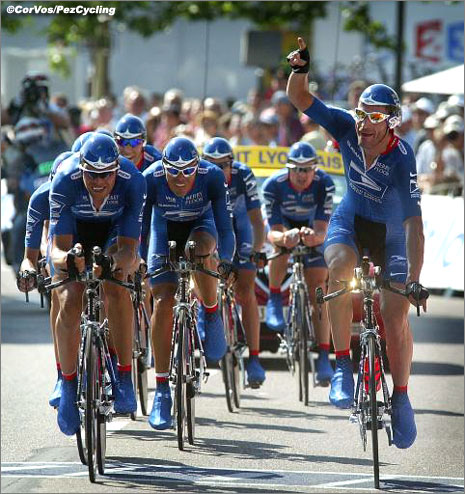 PEZ: When you left US Postal and joined HTC (then Team High Road), was that a conscious decision to get away from that team and were you offered a place at RadioShack?
George: Yea at that point I wanted a change, I wanted to see what else was out there, I needed a different kind of stimulation, a different environment, I felt like I was getting… just bored there and I really enjoyed my time at HTC, the ambiance on the team was good and everyone was happy on the team. RadioShack definitely wanted me to go, but I’d signed pretty early with Jim (Ochowicz) and Team BMC, which is a decision I’m very happy I made. I have such a good relationship with Jim Ochowicz and Andy Rihs, the whole team for that matter. I like my role on the team, not just as a rider, I really like that Jim calls me for advice at times about certain riders coming to the team and they really put a lot more on me, I really like that.

PEZ: Were you ever subpoenaed to go in front of a Grand Jury last year?
George: I don’t want to comment on that, I prefer to focus on the positive side of the sport, like I said earlier I think our sport is doing so much to be a clean sport, much more, in my view, than other sports and I believe we are winning the battle. 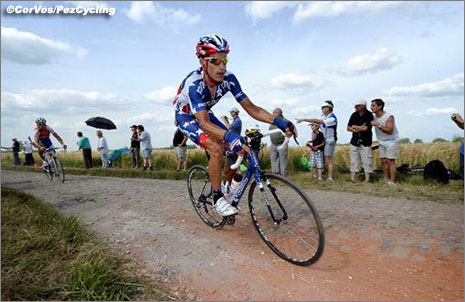 PEZ: Do you have any fresh goals left in the sport to go for?
George: I’d love to win another stage of the Tour de France and Roubaix and Flanders are big things of mine. But really I’m happy also helping the team, seeing the team grow, to get to the top. What’s it called now; World Tour Team? Well whatever, to get to the top of that classification would be a good thing for us. 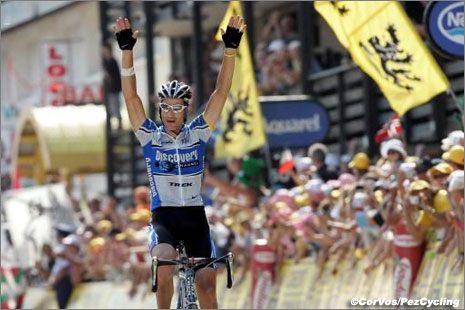 PEZ: How has the team been strengthened from last year, how will that help you?
George: We have (Manuel) Quinziato, (Ivan) Santaromita, Taylor Phinney and then Greg van Avermaet who can win races from smaller groups, Santaromita is a really good climber, our classics team is one of the best, probably the best I’ve ever been on. I think the team is going in the right direction and it should be a lot more successful this year. 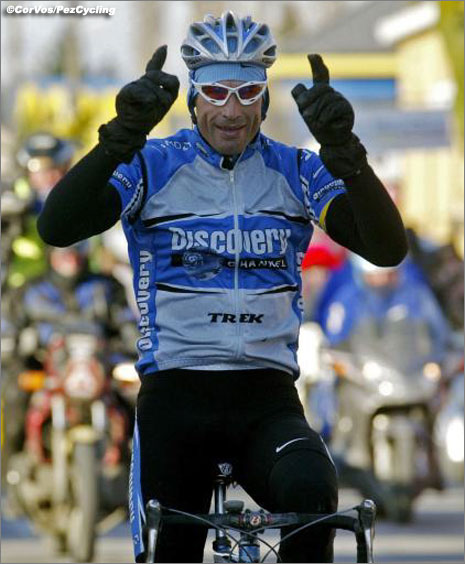 PEZ: Did it take a lot of the stress off the team when you knew you would be stepping up from ProContinental?
George: Yea that definitely helps, last year was a bit worrisome not knowing and waiting to find out what races we could ride. It definitely helps knowing that we will definitely bee there.

PEZ: You’ll ride the Classics and the Tour, which other races?
George: Probably Utah, Colorado and the Canadian World Cup’s, those will be high up in my goals list. 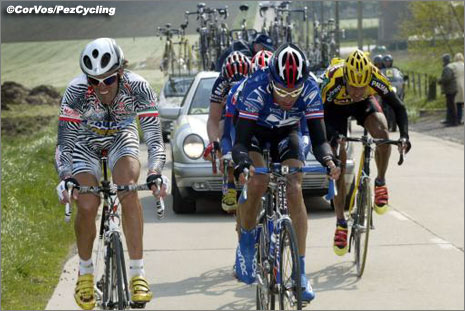 PEZ: What are you immediate plans?
George: I’m going to go back training at home and then I’ll be back in Europe for the Eroica, Tirreno and San Remo, Flanders and Roubaix, then home for the National championships. It would be nice to get the Stars and Stripes back, but I wouldn’t mind if one of the young guys on the team got it. Taylor or Brent Bookwalter, all these guys could do it. 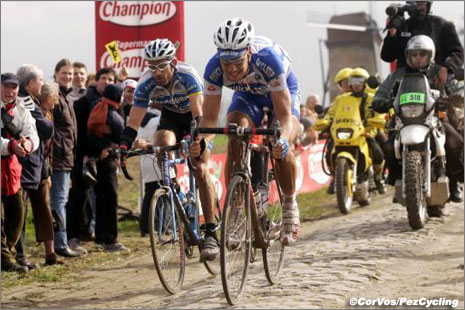 PEZ: When you were in the same team as Lance Armstrong and you were both riding Flanders, they say you were nervous of “The Boss” crashing. Is that true?
George: No, no, he only did it once or twice. No at that point you are putting all your effort in to the race and really only worry about yourself. 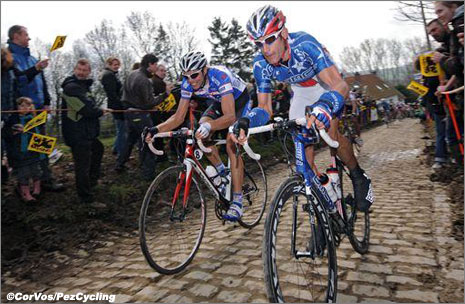 PEZ: What about the bike? Will you make any changes for Roubaix?
George: The bikes are awesome. They ride really well, they are comfortable, light, stiff, fast…everything you want in a bike. For Roubaix we will use the SLR’s, their good for the cobble stones, they give a cushier ride, we won’t change anything.

PEZ: Am I allowed to ask about forks, it’s not a touchy subject?
George: No that’s fine, I’m over it!

PEZ: It made good TV!
George: Yea it was, definitely one of the most watched bits of cycling. 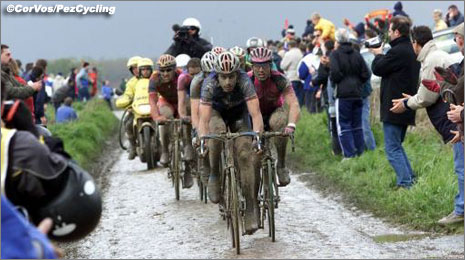 PEZ: And when you do retire what are your plans?
George: I’m going to sit at home on my couch and drink beer! I’d like to stay part of the BMC team in some aspect, maybe I’ll just hang out with Weide (Sean Weide, BMC Press Officer). I still love this sport and I still love to be around it and my clothing company is growing, we supply the clothing for team BMC, hopefully that will continue, I can help with that and make sure the team gets the best clothing possible.

***
Thanks to George and I’m sure we all wish him luck for his 16th and 17th Tour and maybe more?