It’s Monday and Bobby Julich has just won the 2005 Paris-Nice – a huge race for any rider, and his biggest win to date. Bobby has always graciously answered our interview requests, but I was still surprised that he made time for us so soon after his brilliant win…

I dial his mobile number and surprisingly it quickly connects to his home in Nice, France, unsurprisingly the line is full of noise, so the first 5 minutes of our interview is spent with Bobby giving me the number of his landline. We’re soon reconnected, and Bobby is relaxed and obviously happy. It’s bedtime for his young daughter, so Bobby heads upstairs so as not to disturb his young family.

THE BIG WIN
PEZ: Bobby! Congratulations on Paris-Nice! – this is great – it’s one of the coolest things we fans have see in a long time, but it’s gotta be 10 times cooler for you…

Bobby: Yeah it really is… I’m still just totally overwhelmed. I don’t win many races – I’m always in the mix – podium or top 5 or top 10, but this was something special… to win Paris-Nice which has always been a dream of mine since I first rode this race back in 1995 – as well as winning the first ProTour event – I’m honored and… really really happy!

PEZ: What is it about Paris-Nice that struck you from way back that you like so much?

Bobby: I think it was the finish down here on the Cote d’Azur. Back in 1995 I didn’t even live here yet and I thought ‘wow this is beautiful here’, the sun is around, there’s a big airport – it kinda goes back to when I was younger – my dad was a triathlete and I remember watching Wide World of Sports or some program that was transmitting the Nice triathlon and they showed these crazy twisty windy roads and twisty windy descents and right there on the water… it looked so appealing to me. And after doing the race here in 1995, and training a bit here with Motorola, that’s when Frankie Andreu and Kevin Livingston and I decided to move down here from our old base in Como.

So it was just us three and we showed up at the airport, and Frankie and I had no idea how to speak any French whatsoever, Kevin had been taking some in high school so he was our lifeline for the first couple of months… and I’ve been here ever since. 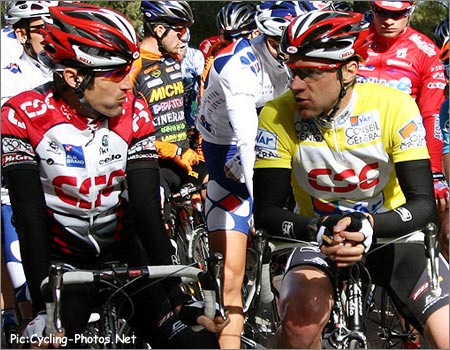 Bobby and Jens Voigt chew the fat at the Tour if the Med.

CHILLIN’ IN FRANCE
PEZ: How about this year’s race – we were astounded at how cold it’s been over there – we just talked to Fred Rodriguez about all the clothing he had just to stay warm – was the weather a factor for you?

Bobby: I think the ASO really have to be credited for what they did for us. In the past the organizers would just let us race or make us race, and there could be some serious health issues [from the cold and dangerous road conditions]. This year they really thought about it and at least had a finish every day. There was one day where we only raced 52 minutes, but I tell ya, it was 52 minutes at 52-53kmh – something crazy like that – and it was probably the most nervous 53k I ever raced in my life. But it was an exciting finish, and allowed us to do the race without jeopardizing our health. They really deserve a lot of credit for having a great race.

PEZ: Your form has got to be… outstanding right now. How do feel in comparison to previous years and what was your winter prep like?

Bobby: I built on the positive season that I had last year – finishing the season not totally tapped out. I came back for the T-Mobile in San Francisco and got sick, and that combined with the cast on my arm after the Olympics to help my broken wrist was a sign that my season was over. And my last race was the 29th of August so I had September and October pretty easy. I had a good winter in the Reno/Tahoe area – we didn’t really get that much snow until January – but by that time I was over here already. So I got a lot of really good mountain biking and road riding in… all at 5000-6000 feet – so that really helped me a lot. 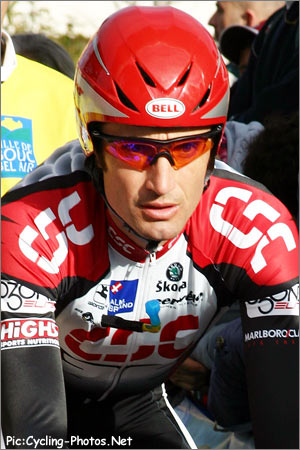 Bobby gives huge credit to the CSC team for his returns to the podium.

IS IT THE TEAM?
PEZ: You’ve really come back into your own since you joined CSC. How much of your recent success can you attribute to CSC and the team?

Bobby: I would attribute almost all of it… You look at my results with Credit Agricole and Telekom, versus my results in the year and a half that I’ve been on CSC and it’s not even in the same ball park. You know I was always there – everyone thinks “oh god where was he the last 4-5 years?” – but I finished every single race that I did. There were years that I’d do 101 races and maybe drop out of one… I had enough good health and good form to finish all the races, but I just couldn’t ever really break into the big time again – and get that result to have people realize that I was still around.

I kinda just fell into the worker syndrome of always bein’ in there and being a very faithful lieutenant to Vinokourov – people forget that I helped him win 2 times Paris-Nice and one time the Tour de Suisse and I was always the first one on the front and the last one off the front.

So what the team did for me this week I think was some karmic payback for the work for Vino and even Jorge Jaksche last year. This is the 4th year in a row that I’ve been on the team that has won Paris-Nice. 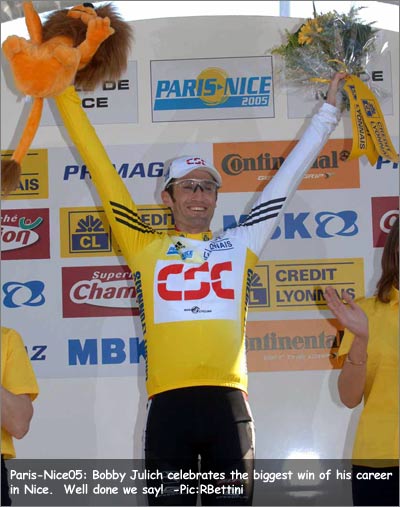 Seriously – have you ever seen anyone happier to win a bike race?

BIG TOUR PLANS?
PEZ: We’ve seen a bit of your calendar for the next few weeks – leading you over to the Tour de Georgia, what’s in store after that?

Bobby: After Tour de Georgia we’ll go to the Reno/Tahoe area for 1 month of training up at altitude, and then a brief stop in Philadelphia and then we head back to France to start the Dauphine, the team time trial in Holland, and the Tour de France.

PEZ: Well, you’ve shown your stuff in the big tours already, and your form is on fire now… are we gonna see you up there in the Tour – ?

PEZ: That’s cool – do have any parting words for PEZ-Readers from from sunny France?

Bobby: yeah… I do have 1 word… well actually two words …

Bobby: Have you noticed the chainrings I’ve been using for the last year and half?

PEZ: Okay we’re gonna have to get these onto the test bench…

Thanks to Bobby for taking the time and congrats again on kicking off the ProTour with a bang.

Oh My Aching Back – Part II