LA Olympian Interview: Following on from his article on the US bikes at the Los Angeles Olympic Games of 1984, Ed Hood spoke the rider who not only rode as part of the team pursuit and was behind the bike design: Brent Emery – Rider and innovator. 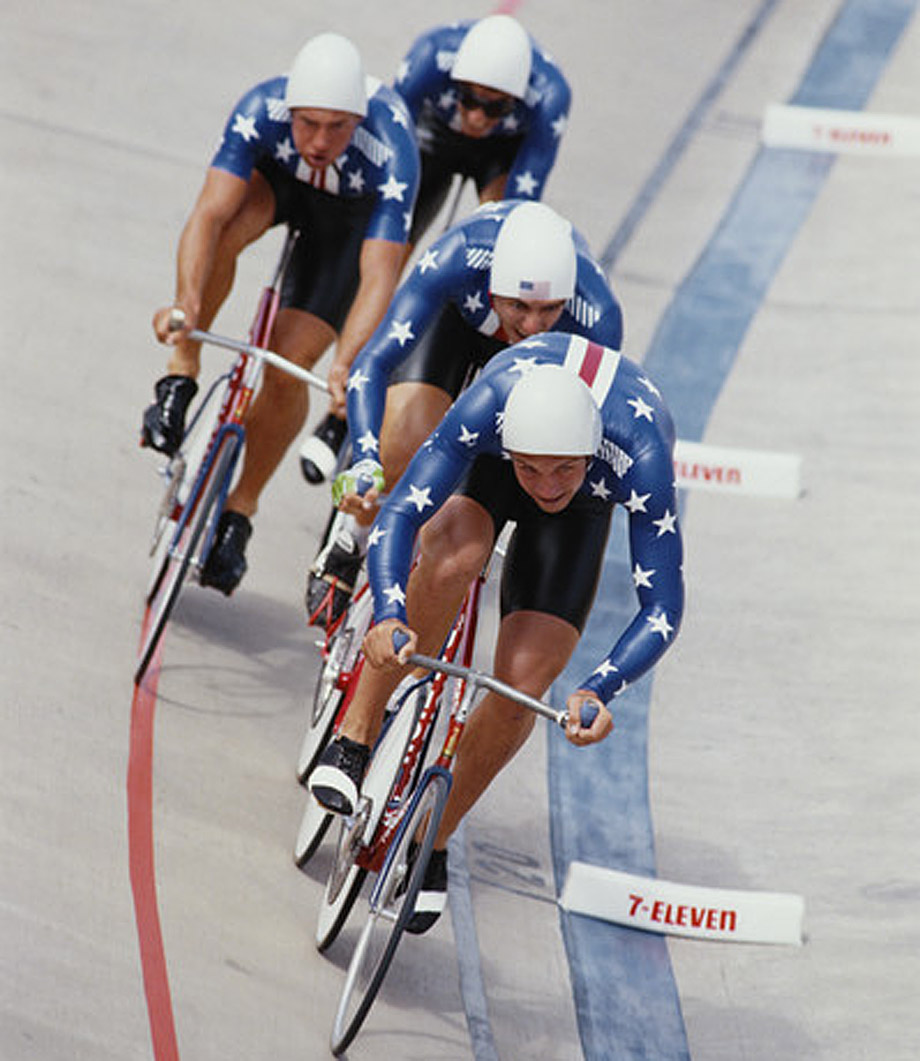 Recently we ran a feature on the US ‘Super Bikes’ at the 1984 Los Angeles Olympics. But bikes can’t talk, not yet – we hear Shimano are working on it though. . .

But what about a guy who piloted one of those 40,000 bucks ‘bikes of the future’ around the 7-eleven velodrome some 36 years ago? Enter Brent Emery, Olympic silver medallist and the man who kicked off the, ‘thinking outside of the box’ which resulted in the futuristic steeds which carried Steve Hegg to individual pursuit gold, Emery and his fellow US team pursuiters to Olympic silver and the US TTT riders to Olympic bronze.

PEZ: I believe you had the original idea for those 1984 ‘Super Bikes?
Brent Emery: In the lead-up to a track meeting in Europe in the early 80’s the Polish team had come to the velodrome to train at their allocated time, which was just after the slot for the East German team’s training and had seen the Germans scurrying away to conceal some radical-looking bikes. Eddie Borysewicz, our Polish coach still had his Polish connections and word got back to him that the Germans had some pretty special bikes in the wings. Eddie lamented to me that in the States we had nothing comparable. I was always a ‘tinkerer’ and had this idea. . . 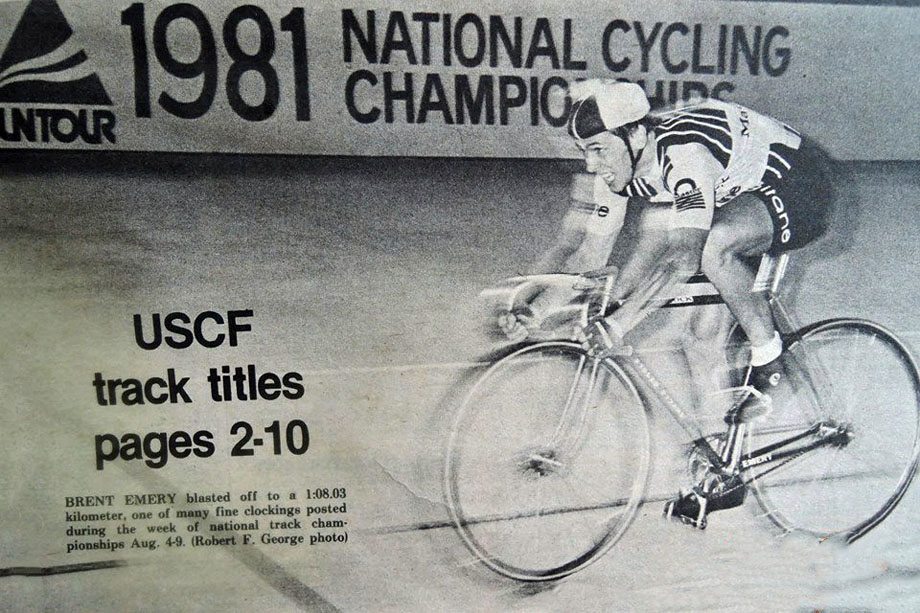 Back then I was splitting my time between the Olympic Training Centre in Colorado Springs and Trexlertown where I did a lot of racing on the velodrome. I went to see John Stinsmen at Veloce Cycles in Allentown Pa. with my ideas, he told me come back on Monday he was busy working on race cars over the weekend. I duly went back on Monday morning and I showed him my idea; he started picking up a lug here a tube there in his workshop – we had to beat up some of the lugs really hard to get the angles we wanted, which were far from standard. The bike took shape through Monday and into the night with John’s wife shuttling food and coffee in to us we worked. We got a basic 24” front wheel and re-drilled it with minimal spoke holes, the ‘bars were from a three speed handlebar turned upside down and backwards, with a few loving bends to shape it and the Cinelli quill stem machined to allow it to go right down into the fork column.
I raced the finished bike the next night, Tuesday at Trexlertown and later in the 7-eleven invitational track meet; immediately you could see the benefit of the small front wheel, you could tuck in so much tighter when you were drafting. 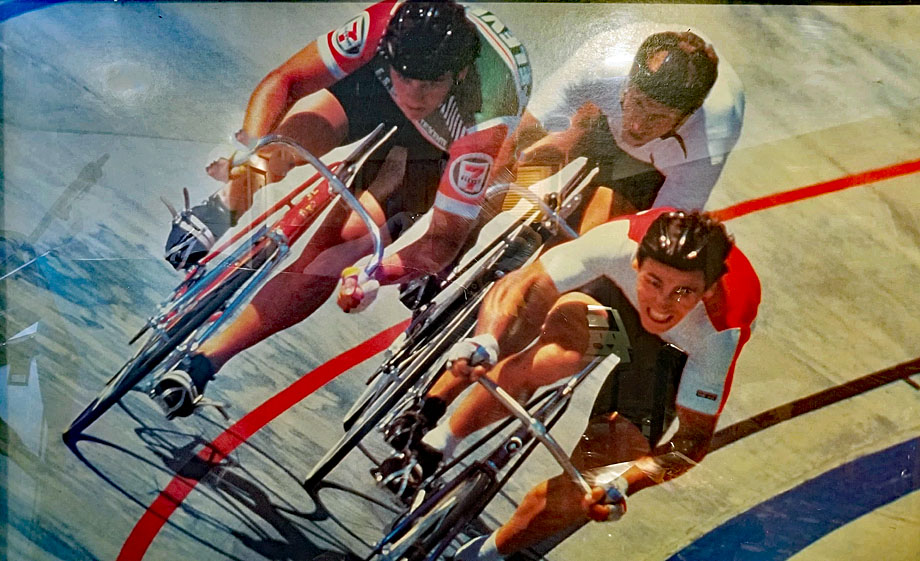 There was actually a picture of me on that bike but wearing a Japanese skinsuit up in every 7-eleven store in the US as a promotional poster. That bike was the inspiration for Eddie B to get the programme off the ground to build the bikes for LA. Chet Kyle was the aerodynamics whizz and Mike Melton the builder. 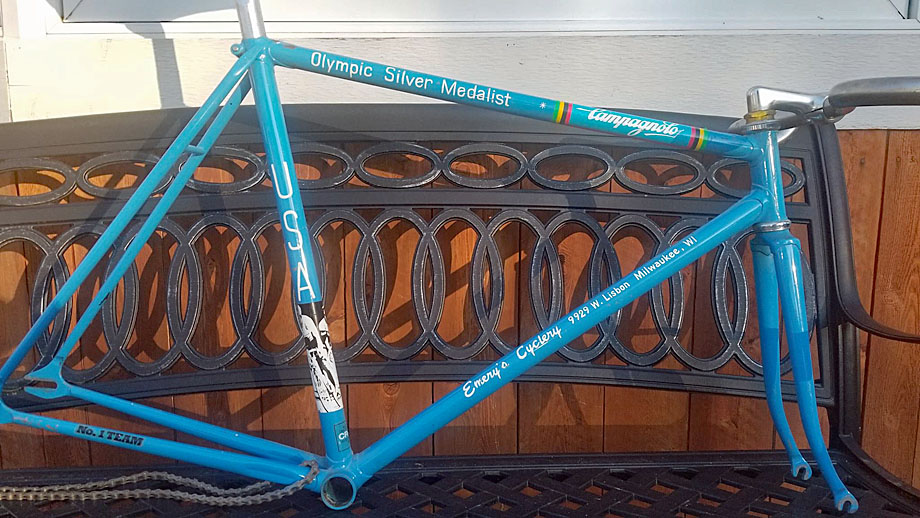 PEZ: You were on the roster for the ’80 Moscow Olympics but the USA boycotted them as a protest over the Soviet invasion of Afghanistan; that must have been a blow?
I’d just quit my job, sold everything I owned and with $300 in my pocket took up a resident spot at the Olympic Training Centre in Colorado Springs. Four days later the boycott was announced. We all went out and got good and drunk. The Centre was an old army camp complete with barbed wire fences – we had put our jackets on the wire to clamber over and then encountered security. . . The thing is though that most of us went back into serious training the next day, just in case there was a change of heart. . . 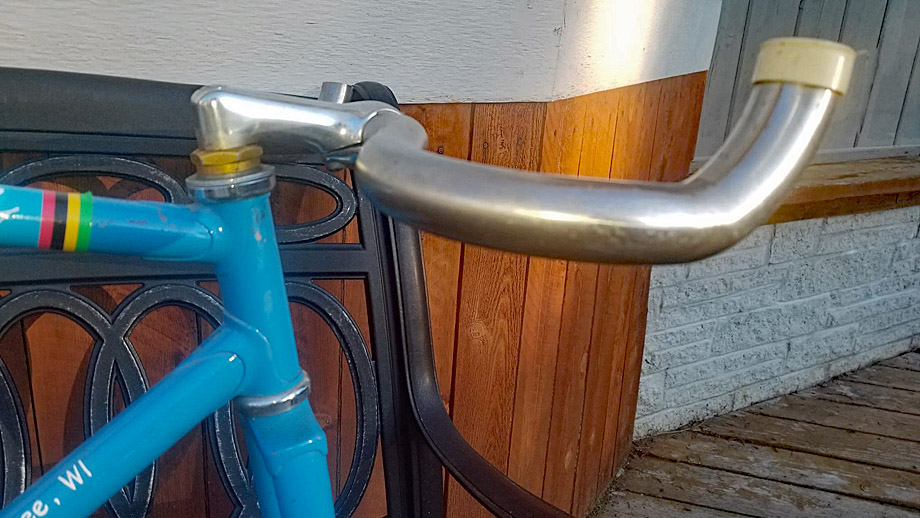 PEZ: You were twice US Kilometre Champion, how did you transition to team pursuit?
I had a bad back injury which took a long time to diagnose correctly and when it was correctly diagnosed I had to wear a back brace 24/7 for six months. And of course, when I came back, I did too much, too soon and developed tendonitis. Whilst I had to be careful and avoid huge kilometre starting efforts, I rode ’83 US points race championships, it was a great race and I won it – I already had the speed so that was me getting into endurance. 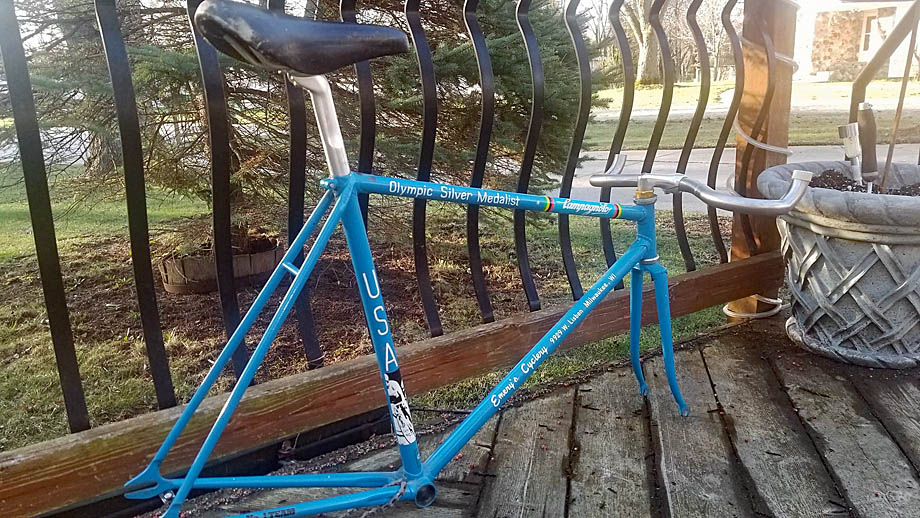 PEZ: What were those ‘Super Bikes’ like to ride?
A little sketchy, a little flexy, there were no bearings in the heads, just nylon bushes and the front hubs were so narrow – they wouldn’t comply with current UCi regulations. The bladed spokes were smuggled out of Germany and the Continental tubulars we ran were supposed to be exclusive to another nation – a lot of thinking and effort went into those machines. We were bending the aluminium combined bars/extension with our starting efforts in training so Eddie B memo-ed everyone in the Olympic training centre giving them the dimensions of the ovens he required on their cookers at home so he could heat treat the aluminium bars in them! But the handling wasn’t so bad, I punctured on one in the Pan-Ams just as I was about to change, I couldn’t go up the track or I would have crashed but I steered round the turn and off into the in-field safely.

PEZ: The 1984 Olympic Team Pursuit qualifying and your team mate Pat McDonough pulls his wheel on the start line because the mechanic has forgotten to tighten the track nuts?
It’s true, yes – but you know, for two years we’d been going through psychological preparation to overcome problems and become mentally tough. Pat saved the day by wobbling the bike into the in-field and falling off; if he hadn’t ‘crashed’ we’d have been out – a pulled wheel isn’t a ‘mechanical.’ 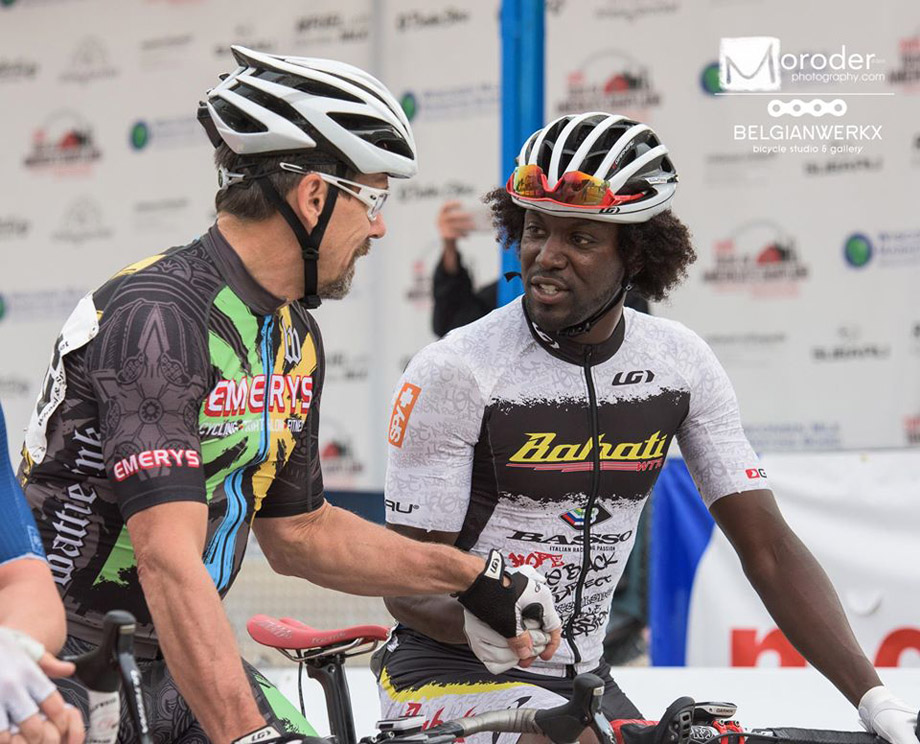 PEZ: And you lined up again but without McDonough and crashed for real?
Steve Hegg and Leonard Nitz, my team mates had both ridden the individual pursuit so their physiology was ‘open’ and ready to race. I hadn’t raced at that stage and Eddie B had me taper into race day but perhaps I should have warmed up more and harder. With just the three of us it was going to be hard, I just wasn’t as ‘on’ as I could have been and when Eddie B signalled that we should ‘lift it’ or risk non-qualification, maybe Leonard upped the tempo that little bit too quickly and I was eased off the back. Steve saw me go off and dropped in between Leonard and me but just at that moment Eddie signalled to Leonard to ease a little and let us get back together. Steve wasn’t expecting the deceleration and run up Leonard’s back wheel, came down and I rode over the top of him. 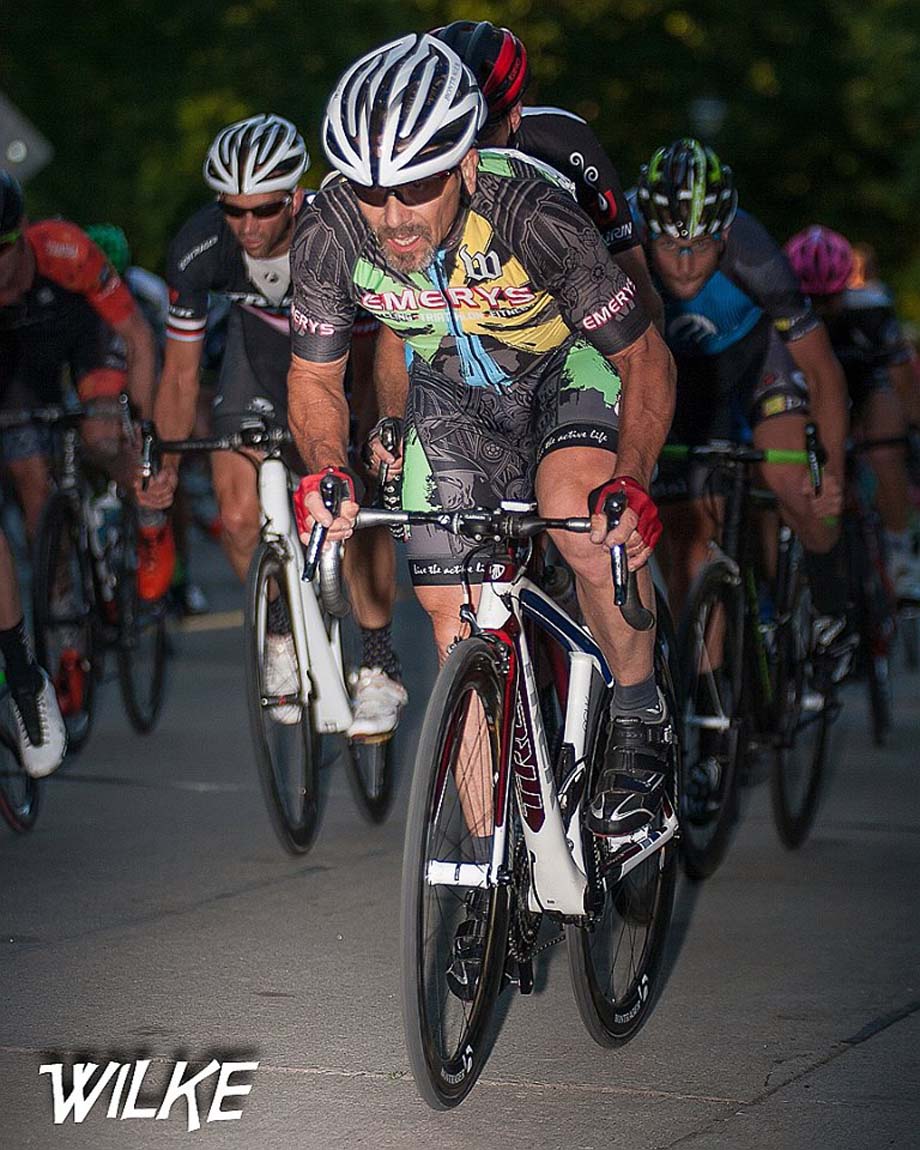 PEZ: You were bashed up but third time lucky?
My right hip caught the worst of it, some folks say I passed out when I was picked up of the track but I don’t remember. But I definitely did pass out when I tried to stand off the medical table. But Eddie B handled it perfectly, he got everyone away from the area so there was no sense of panic, he put smelling salts below my nose and told me; ‘go do what you came here to do!’ Steve and Leonard were doing long pulls and I gave everything I had in my last pull – and remarkably, we qualified fifth fastest.

PEZ: The quarter finals were tight: 1/100th of a second faster than the Danes.
We owed that one Pat McDonough, his sprint brought us home but Steve and Leonard journeyed to a place beyond human effort in that race. 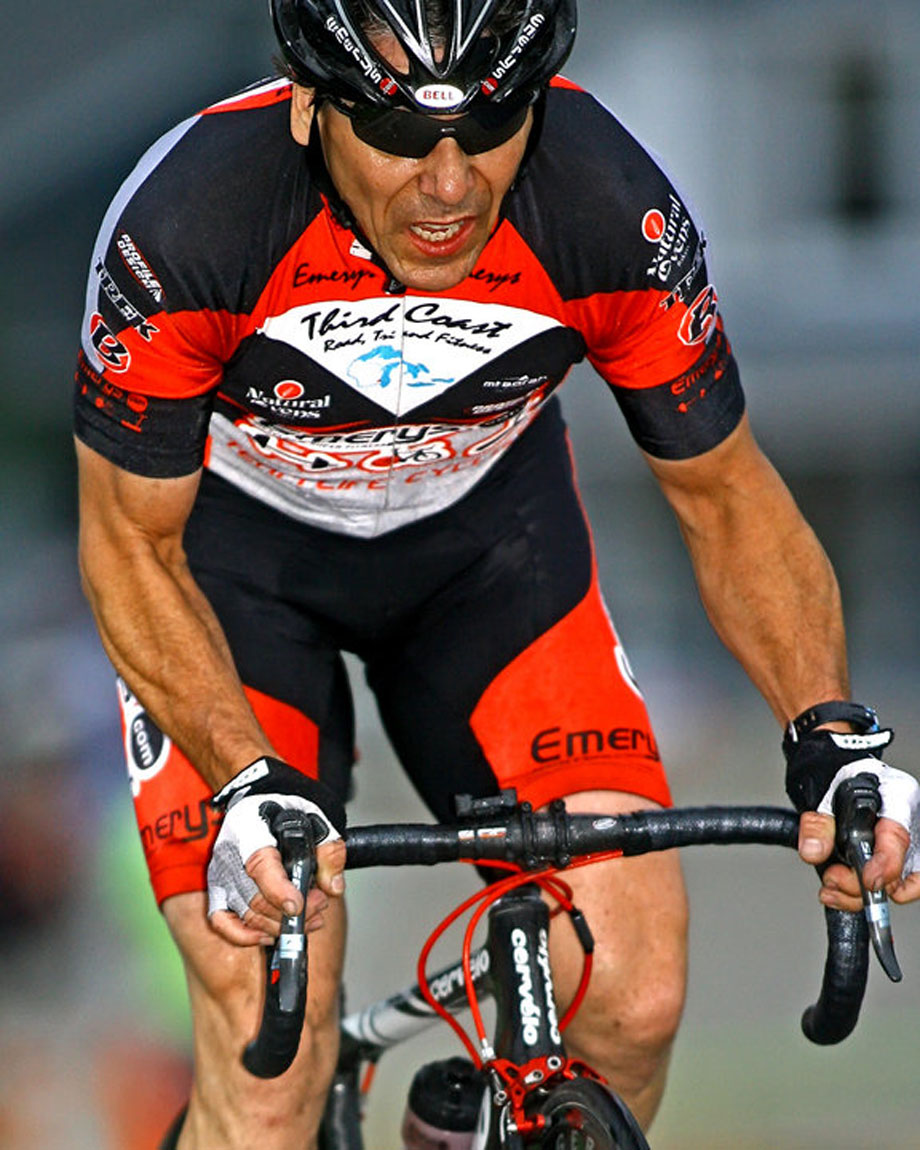 PEZ: The semis were a surprise.
The Germans were out to embarrass on our home track and went out fast but dropped Gunther on the fourth lap then Golz sat up and we were in the final.

PEZ: More drama in the final:
Eddie B left it to me to decide whether it was to be me or Dave Grylls in the final ride, our lap split times had been very close but I decided Dave should ride because I was injured from the crash. The mechanic had replaced Dave’s toe straps before the final and new leather stretches – he pulled his foot off the start line, at that level three guys don’t beat four however hard they try and it was gold for Australia and silver for the USA. But I actually won gold, I met Steve Hegg’s sister, Julie, fell in love and married her! 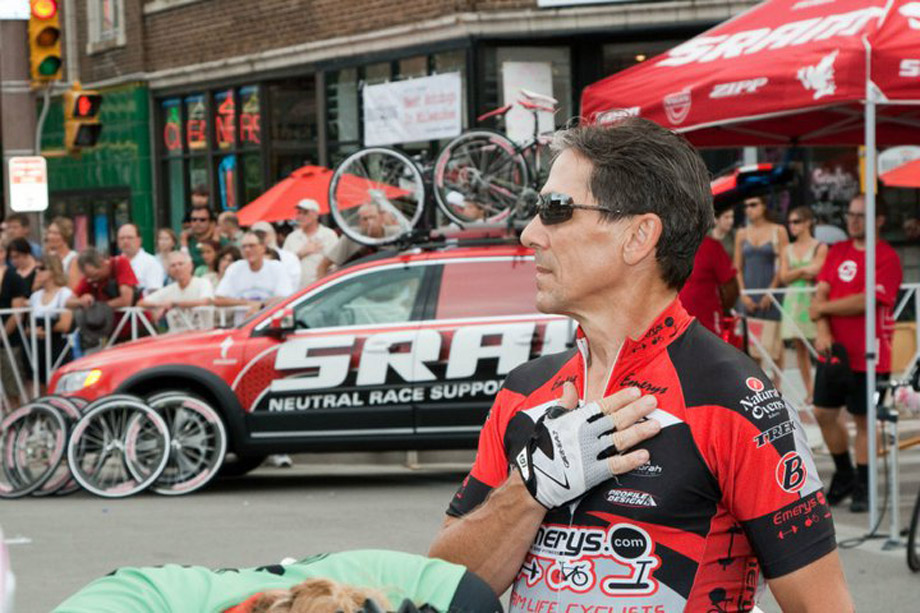 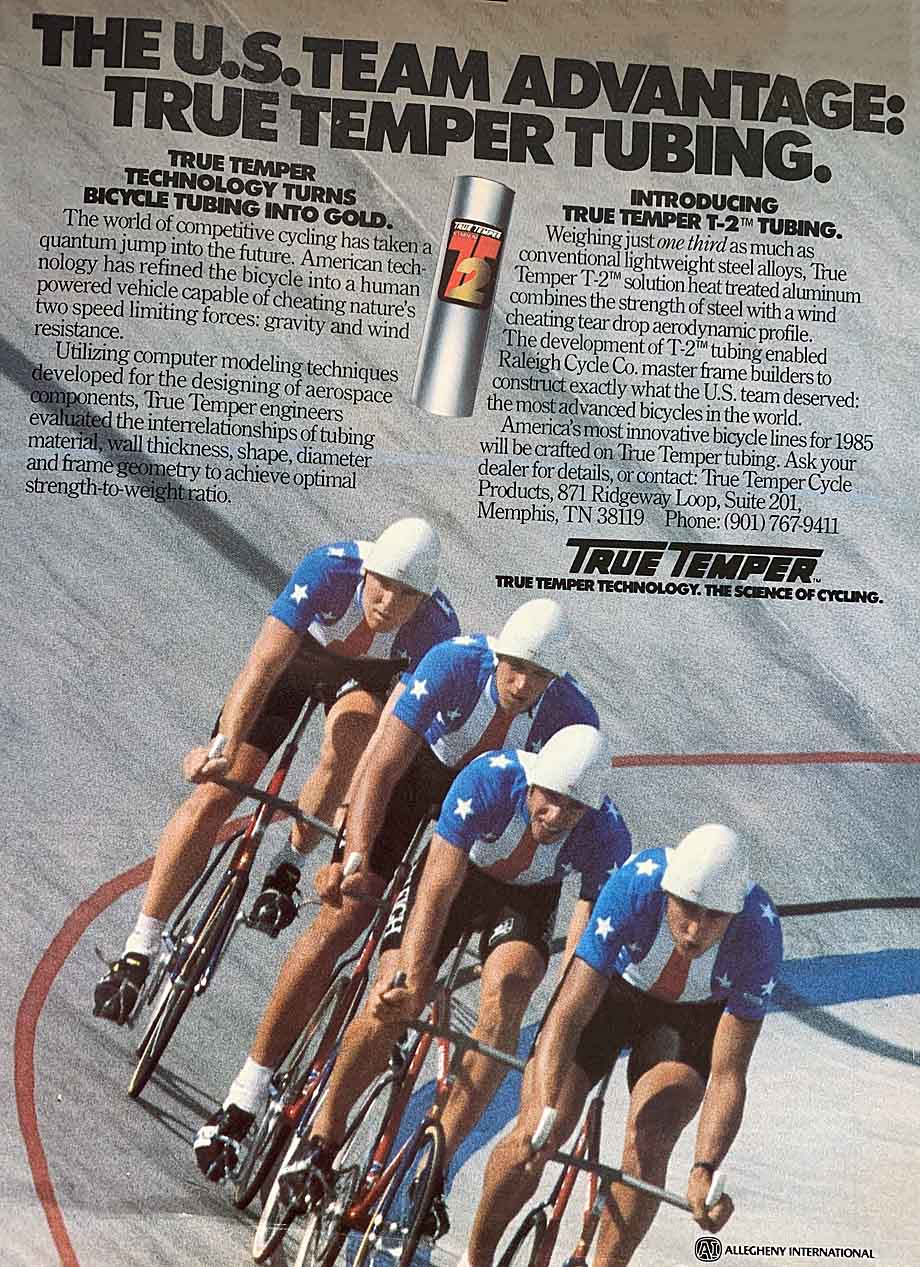