He was twice British pro road race champion; he won the Danish answer to Paris Roubaix – the Grand Prix Midtbank; he was Andy Hampsten’s gregario in a Giro; he’s the voice of Cycling TV. So what the heck is Brian Smith doing running marathons? We figured we best find out. Oh, yeah – and he’s a dad now, too!

PEZ: Congratulations, I believe you’re a dad now, Brian?
Brian: Yeah, Ethan is eight months now, it’s cool being a dad, I’m enjoying the experience. He had me up three times last night though – that’s not handy, especially if you’re training for a marathon! 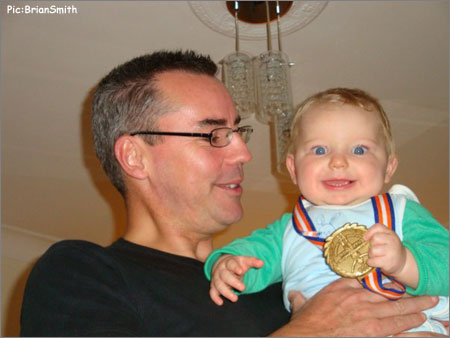 PEZ: The New York marathon – how did it go?
Brian: I was disappointed with my time; I did 4-43, but I had it in my head that I wanted to beat 4-30. I only started to prepare for it three months before, so I can’t be too disappointed.

Pete Slater of Science in Sport (check out the PEZ interview HERE!) was pace making and after about five miles he came round our group and asked us how we felt, everybody said, “fine,” but I knew we were going a bit faster than I expected, he told me it was around 4-15 pace.

With my cycling experience, I was worried that we’d pay for that later, and that’s how it turned out for most of us. There are two million people out watching though, so it’s very easy to get carried away with the atmosphere of the whole thing.

PEZ: Why did you decide to run it?
Brian: For the Geoff Thomas Foundation; it’s a long story but basically, I got ‘closed’ on the deal! 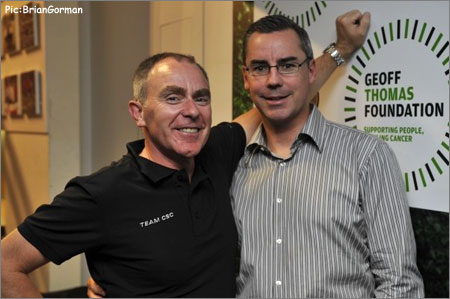 Brian with Richard Gorman in support of the Geoff Thomas Foundation.

After the London to Paris charity bike ride I was at the bar with Geoff Thomas and he was trying to talk me into running it, so I brought Stephen Roche into the conversation – he does a bit of running – and said; “here’s your man, Geoff!”

They shook hands on it, then Stephen turned to me, held his hand out and said; ‘but only if you run it too!’ 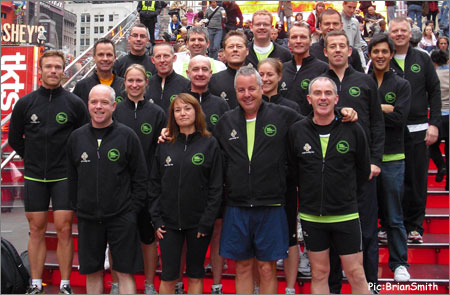 PEZ: What was the training like?
Brian: The first month was easy, 10/15 minutes, three days-a-week. But when I stepped up to 30 minutes, I damaged my knee and started to get pains in my shins.

After five or six weeks, I could hardly walk and I had to see specialists about stretching and getting the right shoes – and I started to run on softer ground. As the duration went up to 45 minutes I found it was taking me a week to recover, I was hobbling to the train to work in the morning. 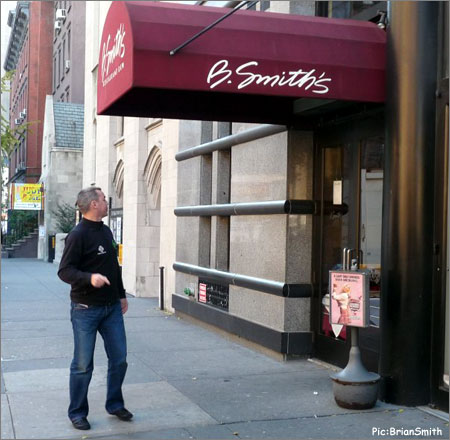 What the?! Brian Smith runs into B Smith in New York.

PEZ: How would you compare cycling training to running training?
Brian: Mentally, it’s just as hard, you see all these folk running marathons and think; ‘oh, that must be OK;’ but it’s not! You think that walking and running are the most natural things in the world; but I had to change my nutrition and take massage.

The thing that inspired me to keep it going was that David Harmon – the Eurosport commentator – had to drop out because of the problems he experienced in training and he was absolutely gutted, it was the spur I needed to keep training, despite the pain.

The furthest I ran in training was two hours, it was supposed to be two-and-a-half, but it was just too painful. I did nothing for the two weeks prior; I wanted to arrive at the start line with no pain in my legs. Although we did do a 40 minute warm up run in New York on the Saturday – the buzz in the City was terrific.

I actually took my wife to a Broadway show on the Saturday night; I wasn’t going all the way to New York without doing some of the tourist stuff! 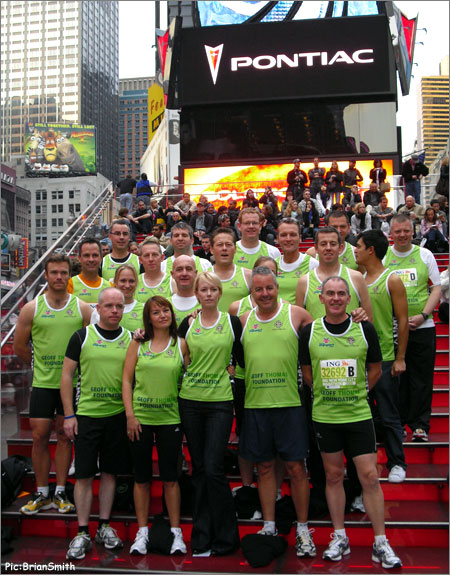 The race didn’t start until 10.30, but we had to be at the start for 6.30, because of the road closures – we were hanging around in the cold for four hours. I started with a lot of clothing on, but I was stripped off to shorts and vest after a mile-and-a-half.

The size and noise from the crowds was fantastic, whether you were first or last on the road, you were cheered to the echo. 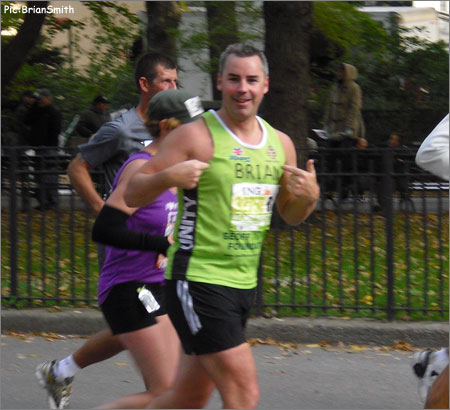 PEZ: Were there any other cyclists competing?
Brian: Apart from Stephen and myself, I think Saul Raisin was the only other one.

PEZ: Any more races planned?
Brian: I’ve been advised to have a two week rest, but I’m going to keep it going and do the London marathon with Stephen Roche and Shane Sutton.

PEZ: Will be still be hearing you on Cycling TV in 2009?
Brian: Yeah, the company has been reorganised and I’m freelance now, but commentating is my main priority. 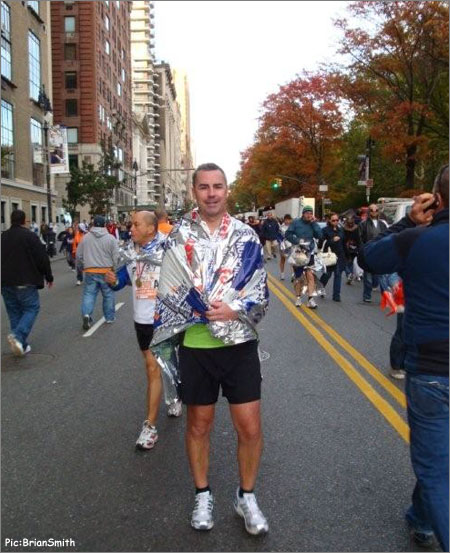 PEZ: Dan Fleeman said that you helped him get his contract at Cervelo Test Team – is being a rider’s agent something you’ll pursue?
Brian: No, commentary is my big thing. With the commentating you go home to your family every night and that’s very important to me.

PEZ: CERA?
Brian: Very sad; Kohl said he did because of the pressure he was under, Gerolsteiner were folding and he needed results.

In the old days, people would say; ‘take this, take that,’ but now all the teams have doctors, there should be no doubt about what’s legal and what’s not – but there are always people who cheat.

I remember saying to Anthony McCrossan – off microphone – when commentating during the Giro that what Ricco and Sella were doing wasn’t natural – the whole LPR team chasing, couldn’t make an impression!

We have to keep working to get the cheats out; it’s sad because so much has already been done to sort it out. I was approached for advice by prospective sponsors, looking for advice at the start of this season. I told them that they would be best to wait until 2009 – it will be better then, from a drugs scandal perspective. I wish I was a young rider turning pro in the current situation; the playing field is so much more level. 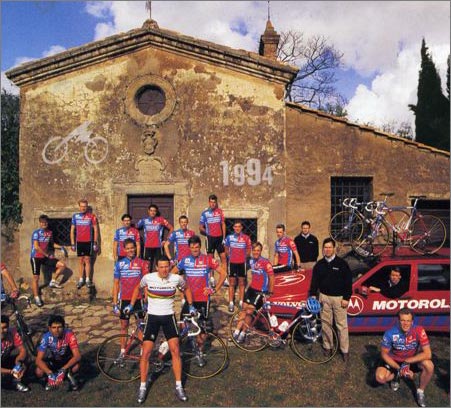 Brian has seen a lot of cycling – he’s fifth from right in this picture. I’m guessing a certain someone is recognizable as well?

PEZ: Drugs apart, what disappointed you about cycling in 2008?
Brian: The political aspect is a wee bit sad; the sport has enough on its plate with the drugs mess, never mind squabbling.

PEZ: There are a lot of pros without a contract for 2009.
Brian: It’s the nature of the times, Spain still has the shadow of Puerto hanging over it and in Italy the Ricco and Sella situations haven’t helped. But look at cyclo-cross in Flanders and track racing in Britain – they are absolutely booming.

PEZ: Favourite race of 2008?
Brian: I was in the CSC hospitality suite on the bridge that goes across the road with 1500 metres to go on l’Alpe D’Huez.

Being with the team; watching Carlos on the big screen; seeing him ride past and then meeting him in the hotel after the stage, with the yellow jersey – that was pretty special. 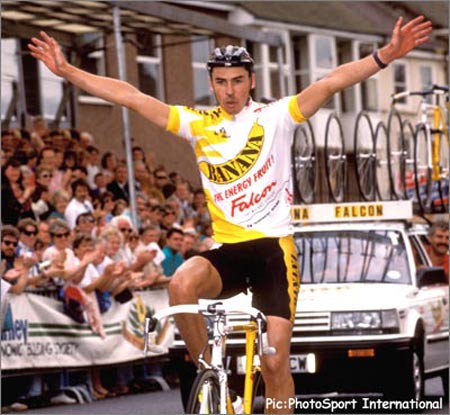 PEZ: Who should we be watching in 2009?
Brian: Saxo Bank will continue to produce the goods; I think that this will be the year Andy Schleck moves up to the very top.

I think that Thor Hushovd will be rejuvenated at Cervelo, especially with Hayden Roulston and Brett Lancaster in his train – I think Cervelo will surprise a lot of people.

And watch for Nicholas Roche – the sport has turned a corner, the young, clean riders will come to the fore in 2009! 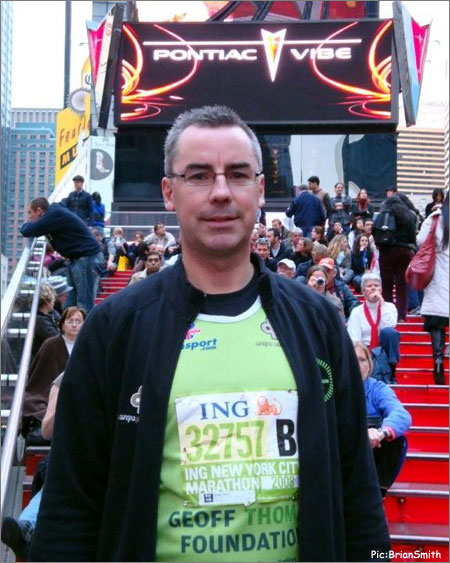 ***
Let’s hope so, Brian – thank you for your time and opinions.

Check out one from the archives – Ed talked to Brian Smith about his bike racing career back in August of 2005.

Toolbox: Mind of a Champ