This year’s field in the Tour of Britain is, arguably, the best ever assembled in its history, with a lot of Pro Tour teams. CSC, QuickStep, T-Mobile and Phonak have all sent strong teams, but there’s a lot more to this race than the Tom Boonens…

Pez got the chance to catch a few moments with Skil-Shimano DS Rudi Kemna at the Glasgow GP, and again at the start of the Tour of Britain as he got his team primed for what is a big race on their late-season programme. 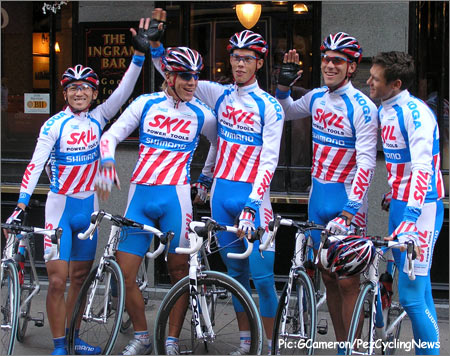 Continental tomfoolery outside central Glasgow’s Ingram Bar. The Skil boys ventured inside for a coffee ….. lightweights! They should have had IrnBru!

Rudi was a pro until recently and with a fine record of results. As an amateur he won over 100 races, and scored the Dutch national title in 2003 for his biggest professional win. With experience like that, he knows all about motivating his riders for the challenges ahead.

Rudi Kemna: Hi, it’s nice to be here, but I have seen all the weather today! First, it is sunny and warm, then the wind comes, and now (looking to the heavens) we have more clouds coming… 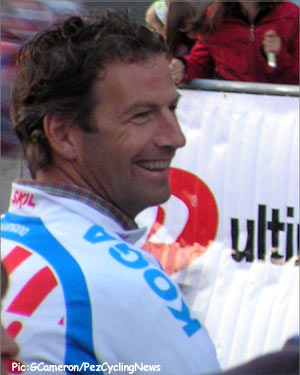 Pez: How are your guys feeling about the week ahead? Are you ready to get stuck in?

Rudi Kemna: Of course. We have a really passionate group of riders here. I asked them ‘Who wants to do the Tour of Britain?’and they were all excited to come. Even for a criterium like this (Monday night’s Glasgow GP).

There will be a lot of big riders sitting in their hotel rooms right now, because they’ll be thinking: “Aaah, it’s only a criterium. What’s the money like?” Last year, I was a professional, and every professional rider wants to earn good money, of course. But I also loved to race. I had a real passion to be on the bike. My guys here have that also.

Skil-Shimano is primed for every race. You must always give your best every time you sit on a bike, and it’s important that we show that here. 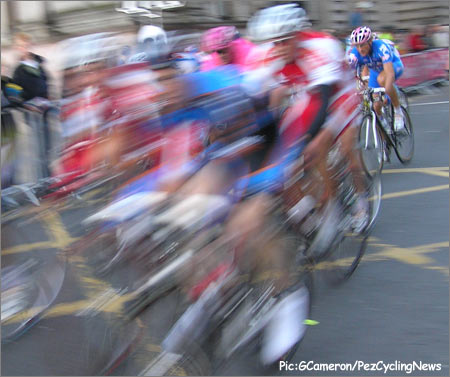 Inadvertently dramatic high-speed action from the Glasgow GP. And all because I never read my camera’s instructions …. sheesh.

Pez: You’ve got a chance to do that against some really top guys.

Rudi Kemna: It’s great to see such a good field for this race. We have the world champion (Boonen); the world time trial champion (Rogers); we have guys that made the Tour de France podium (Kloden), so it is a good race for us to be in again.

Pez: You’ve been in Pro Tour races this year already and done well.

Rudi Kemna: We’ve been in quite a few Pro Tour events, and fighting in all of them. Tjallingi won the Tour of Belgium, of course. And we’ve just finished the Eneco Tour (in Belgium and Holland) where we were working everyday, and mixing it up with the big teams.

Pez: Who is the main guy for you in the Tour of Britain?

Rudi Kemna: Aart Vierhouten is going to be the captain for the team in this race. He’s been a pro for many years, so he is really solid and experienced. He will be in contact with me and he’ll give the orders and instructions to the guys on the road. Everything goes through him.

All of the guys have radios, but Aart is the main guy. But we’ve got Maarten Tjallingi and Aart Vierhouten – strong guys who can do things in this race.
[Ed. – Vierhouten scored a second place behind Roger Hammond in the Blackpool-Liverpool stage] 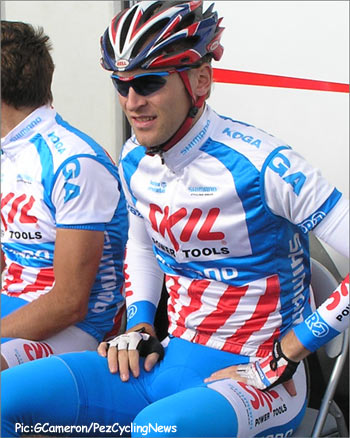 Rene Weissinger prepares for the first stage of the 2006 Tour of Britain.

Pez: Even though it’s not near your home base, the team seems to be putting a lot into the Tour this year.

Rudi Kemna: A race like this is really important because our sponsors are involved, (Shimano has a big presence on the Tour of Britain in 2006) and there is a lot of Skil products in the shops here in the UK, so it was great for us to get into this race.

Skil-Shimano is putting in a big effort in cycling and the team. Have you been to our website? It’s really good, really professional. All the news and about what we do is there in Dutch and English (as well as five other languages!), so please have a look.

Pez: Thanks for taking the time to chat, and good luck to the team.

The Skil-Shimano team seems to be really happy, with lots of laughter and banter going on as the guys were getting their pre-race rub-downs. So, best of luck to the guys as they head south to London.

For a lot more information, check out: www.skilcyclingteam.com

Be Your Own Coach: FAQ’s Part II