Rider Interview: There can be nothing better than racing on your home roads in front of the people of your hometown. This week the Tour of the Basque Country was in Bilbao and PEZman in the north of Spain, Luke Maguire, caught up with Caja Rural-Seguros RGA’s Bilbao resident Jonathan Lastra who was looking good in the light blue sprint competition jersey. 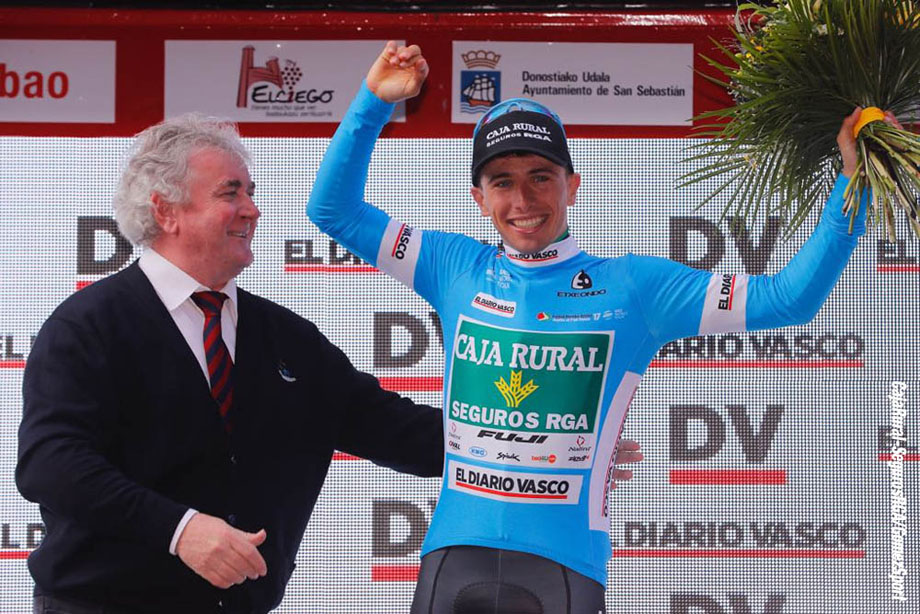 Sprint jersey at the end of stage 4 on Thursday

With two stages finishing and starting in his hometown of Bilbao, Spain, we caught up with Jonathan Lastra of Caja Rural-Seguros RGA during the Tour of the Basque Country. The smiley 23-year old gives us the inside story about the experience of his first year pro, competing against World Tour riders, Fuji bikes and his idols in the Peloton.

PEZ: What was the biggest thing you learned in your first year as a professional last year?
Jonathan Lastra: You learn a lot! It’s the dream of your life to race as a pro, but unfortunately my first taste was one to forget. We were in France at the Etoile de Bessèges and I got sick a couple of days before the first stage. I could barely eat two days before the race so I started stage one knowing I wasn’t going to be able to finish, which is never good. It wasn’t the most pleasant experience but I am definitely stronger now as a result. 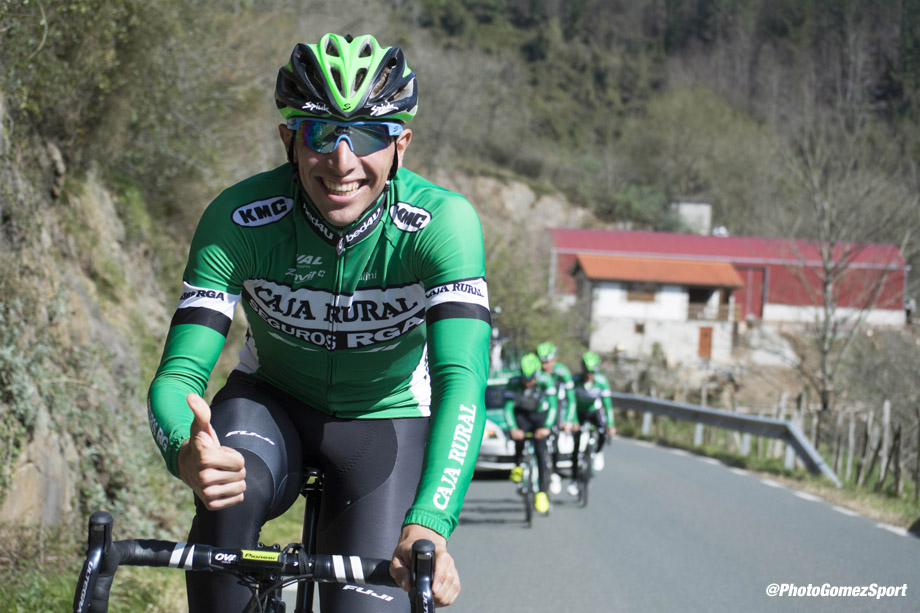 PEZ: Was there a big difference in level between amateur and professional?
Amateur racing is very explosive and constant attacking. It’s not like in the pro peloton where you have one or two teams controlling the pace. The pro races are much longer too which makes a big difference, especially in stage races. Amateur racing is definitely tough but you don’t have to keep the high rhythm up for a long as you do in the professional peloton. One place where there are similarities is the opening kilometers. Amateur races in Spain have very fast starts with lots of attacking similar to the pros.

PEZ: And the jump between Continental and Pro-Continental/World Tour?
It all moves in steps. The rhythm, rather than the speed, is the big difference. Continental racing is not unlike amateur, Pro Continental is a bit faster and in the World Tour there is another jump. If you are riding with World Tour riders you can feel it immediately, if they put the hammer down it gets very fast very quickly! 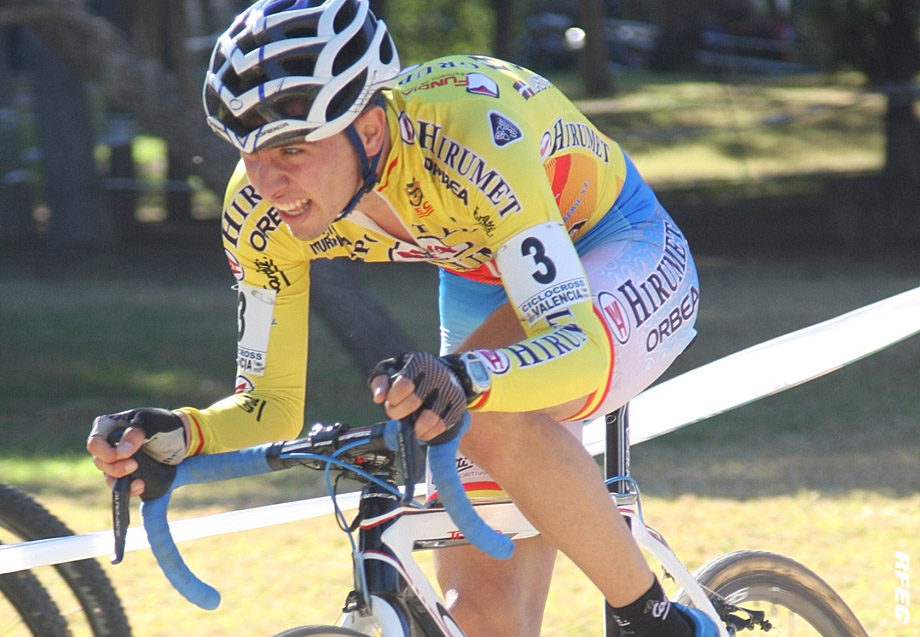 PEZ: You first started competing through Cyclocross – how did you make the move to the road?
Before, cyclocross was my main focus. I was always curious about trying road in the future though. Of course, I could have had a good amateur career as a cyclocross rider, but I would have always had that curiosity as to what the pro life on the road would be like. So I said “Let’s have a shot at road riding”. My deal was to dedicate myself 100% to the road for two years to try and make it as a professional and if it didn’t work out I would go back to Cyclocross. I was lucky that Caja Rural-Seguros RGA were interested and I signed my first contract with them.

PEZ: Is your heart still with Cyclocross?
To be honest it still is (smiles), but I am beginning to like the road more and more. It has already been nearly four years since I competed in cyclocross – the calendar of the road season doesn’t really allow for both. 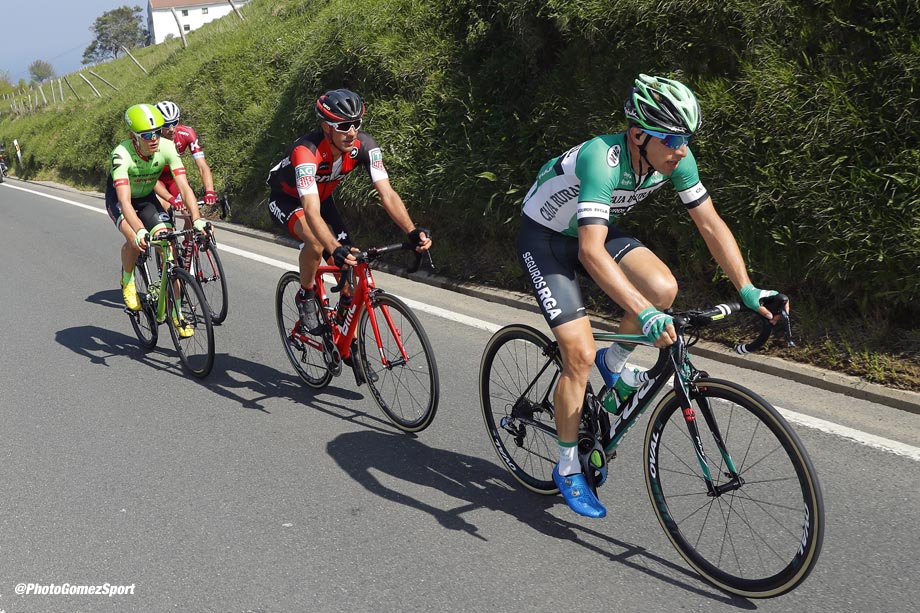 PEZ: Do the techniques learned from cyclocross help you on the road?
Yeah, I think so. The speeds are much faster in road racing in general so that takes getting used to. But for example in the descents my technique and style from cycloross helps me to have more control and to do it better. The bikes handle a bit differently though.

PEZ: The Caja Rural-Seguros RGA team is sponsored by Fuji bikes again this year. What is your opinion of the bikes?
Fuji really spoil us with the bikes. I’m currently riding the Fuji SL which is more of a climbers bike because of its low weight. Some of the other guys are riding the Fuji Transonic which is slightly heavier but is really aero. There is something for everybody depending on what you prefer. In terms of performance they are super stiff frames and are very stylish designs too, I think. 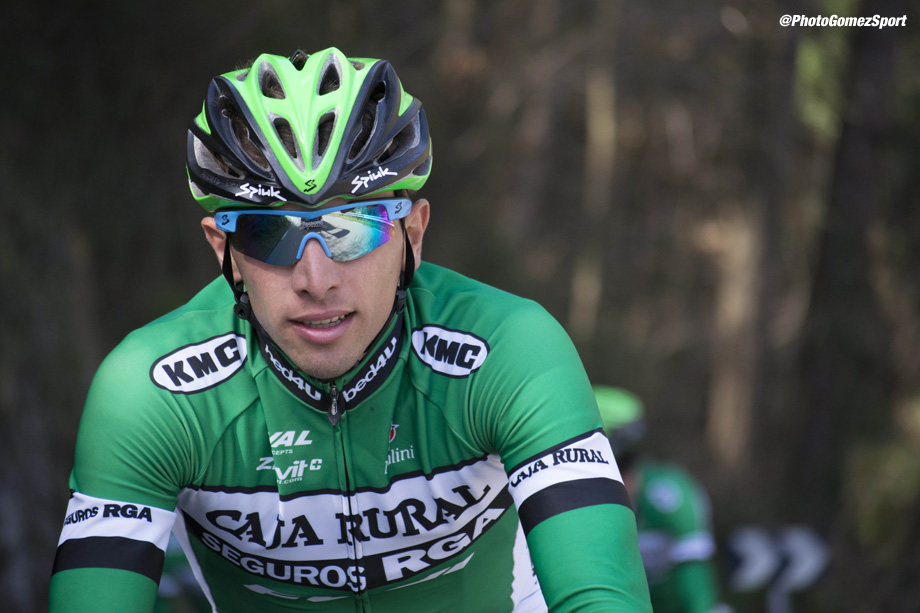 PEZ: Many riders in their first year of being a pro spend their time near the back of the peloton learning the ropes, but you were on the attack a lot it seemed?
That’s exactly how I intended on treating the first year. To learn and make my way slowly… but in the end our team focuses a lot on the breakaways and that’s the type of riding I like too. Obviously you can’t get into it every day. But when I can I always try to slip into the breakaway. I knew it could be a little niche of mine, so I got in a lot of breakaways last year. There were times when I’d find myself in the breakaway and be thinking “What am I doing here? I told myself not to attack today!”

PEZ: All your results have come from breakaways?
Yeah, more or less. Sometimes they have even come by accident. In the Ride London Classic for example, I won the intermediate sprint and next thing I knew I was standing on the podium beside Tom Boonen. I wasn’t even looking for the breakaway that day, but once you are in a good position you have to make the most of it. 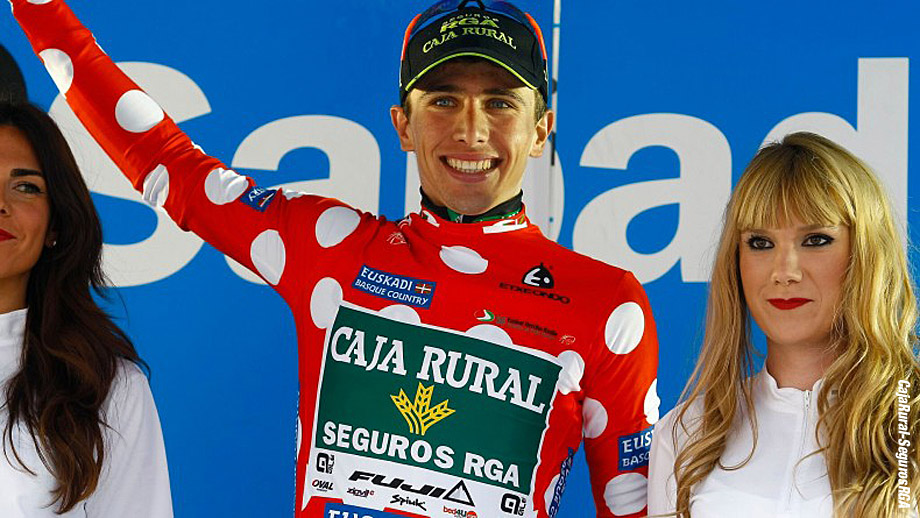 PEZ: You got your best result by winning the mountains jersey on the first day of the Tour of the Basque Country… how did it feel being on the podium of your first World Tour race?
You really enjoy it in the moment, but almost straightaway you want more. I was already thinking about defending the jersey the next day, or at least trying to. What was most special of all was that it was my home race, so it was the perfect place to get my first success. 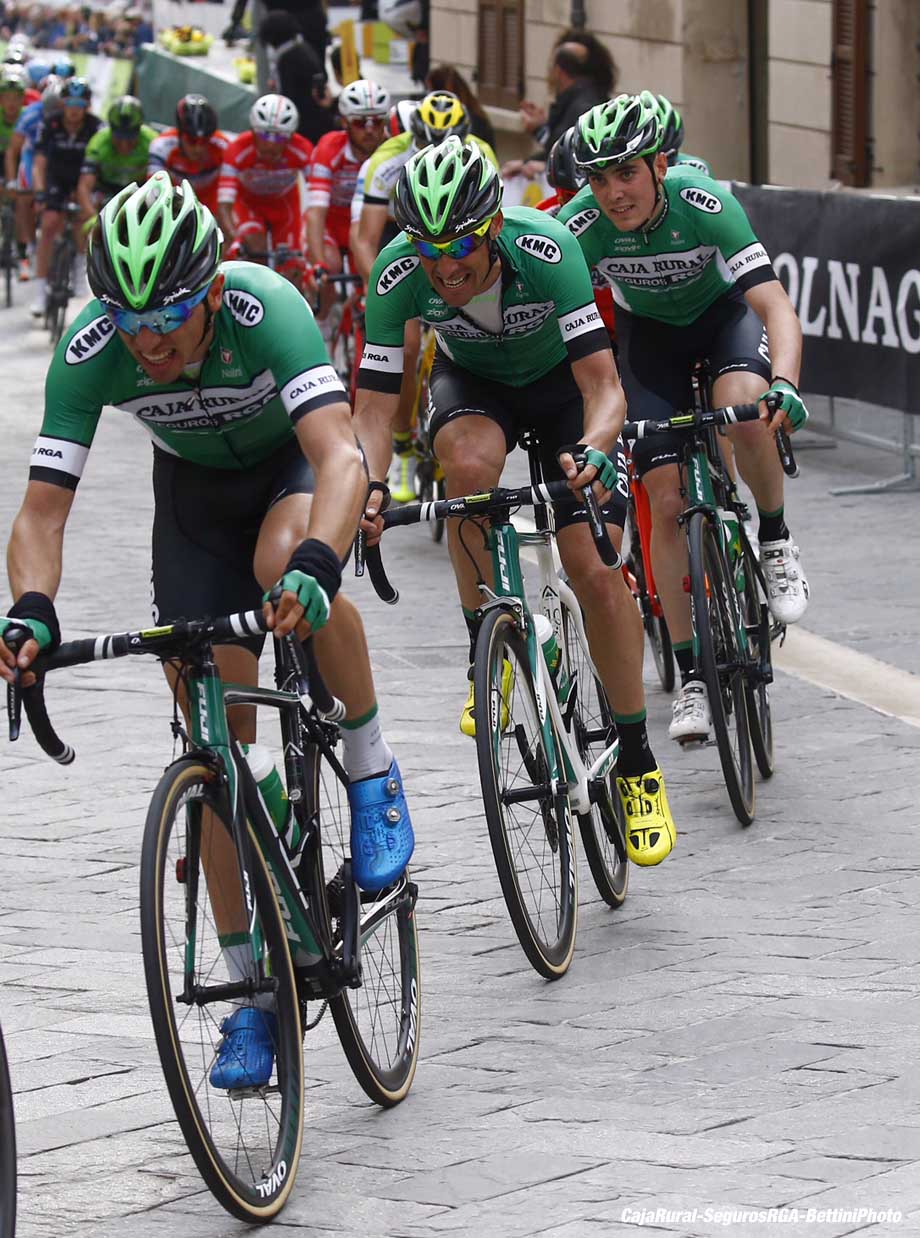 PEZ: Did you know coming to the line that you had won the jersey?
Yes, and I was delighted! We were not sure until the final kilometers until the director came up alongside me in the team car shouting “You have the jersey by one point, it’s yours!” At that stage of the race I was way off the back and doing track stands up the final climb I was so tired. I kept going back to the car asking them were they sure I had won it.

PEZ: Do you have any idols inside the Peloton?
My two favorite riders are Peter Sagan and Zdeněk Štybar. Cancellara was also someone who was hugely respected in the peloton and his absence is definitely felt. 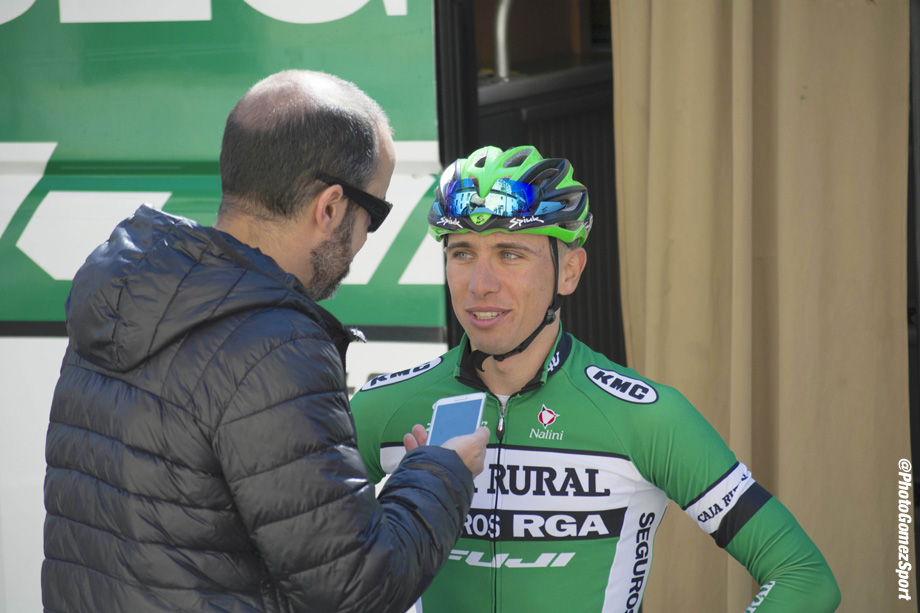 PEZ: What are your objectives for this season?
There are two main objectives this year. The first is to put in a good performance at the Tour of the Basque Country, because it’s my home race. The other goal is to make it on to the Caja Rural-Seguros RGA team for the Vuelta España. The most important thing is just to improve as a rider.

PEZ: Do you think you can make breakaways your speciality?
I think so. I have a pretty good kick so am pretty fast if comes to a sprint from a small group. I am a reasonably strong climber too when it comes down to it. Therefore I think the breakaways typical of a medium mountain stage are perfect for me. I am still young so I haven´t classified myself as any specific type of rider just yet. 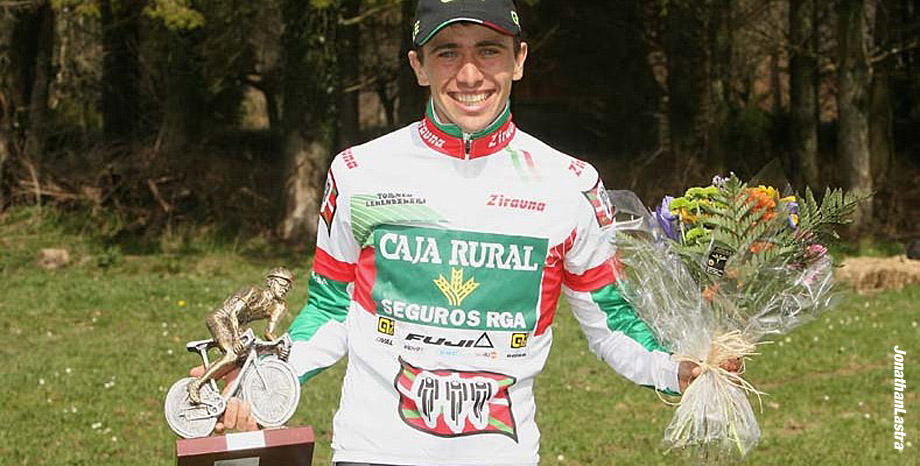 PEZ: Have you any big ambition in cycling?
Maybe it’s because of my cyclocross background but the race I would love to win one day is the World Championships. In cyclocross the World Championships is the biggest race on the calendar, so it has always been important for me. Something more achievable perhaps would be to win the Mountains jersey at the Tour of the Basque Country. That is what I am focusing on at the moment. 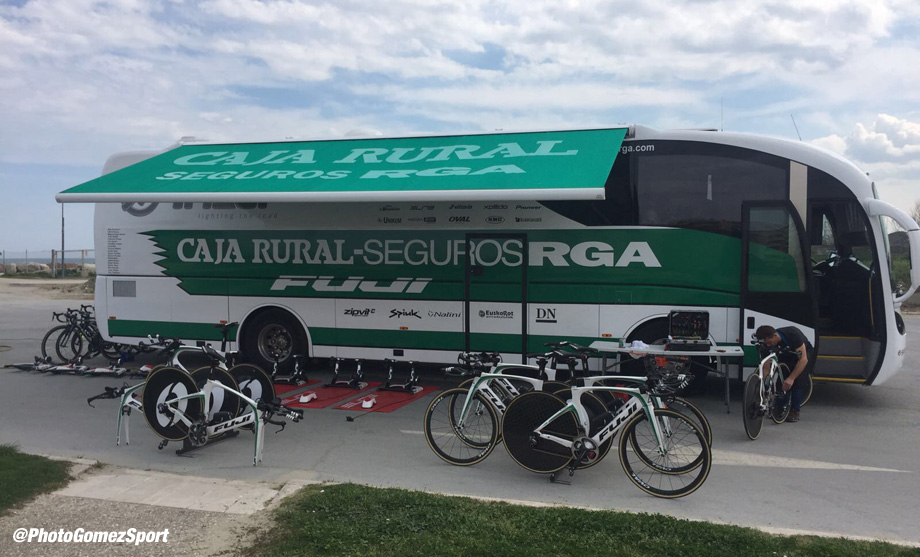 Race in France Up Next For Axeon Hagens Berman