Ex-Rider Interview: Barry Harvey was a Canadian star of the track in the 60s with National and Commonwealth Games medals round his neck and is now the subject of a new book ‘Inside Cycling’ on the shelves soon. Ed Hood spoke to Barry about his racing career and the production of one of the first titanium frames. 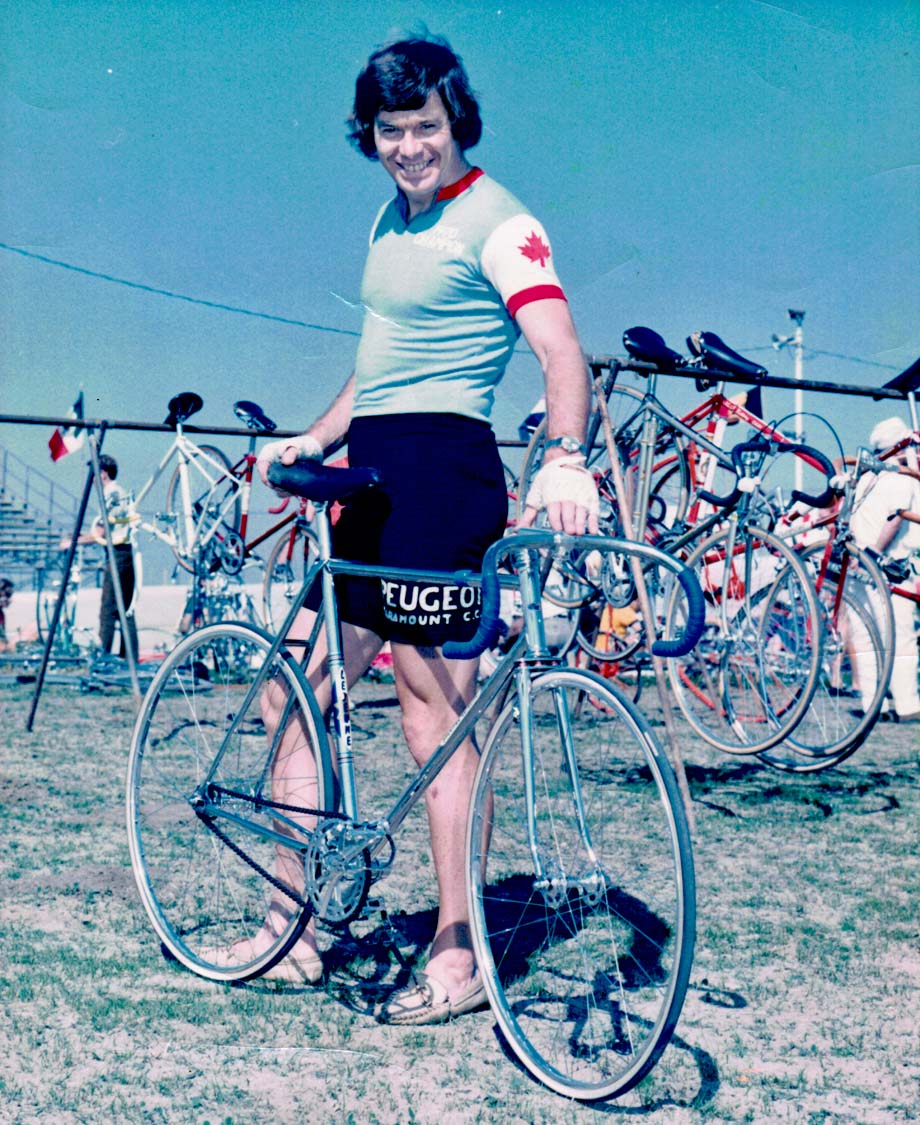 Barry Harvey was one of Canada’s finest track riders with eight national tiles and a Commonwealth Games silver medal to his name. He carried the maple leaf to velodromes all over the world but his career was curtailed by a horror crash which ended his Olympic hopes and saw him transfer his focus from racing to producing one of the very first titanium frames. His career will be dealt with in depth in a new book by Mike Breckon called, ‘Inside Cycling,’ in anticipation of which we had a chat with the man originally from Leicester but who will forever be associated with Canadian cycling.

PEZ: In England you were the Leicester Forest Cycling Club 25 and 100 mile time trials champion, that was before you discovered the velodrome, Barry?
Barry Harvey: I started riding in 1961 in Thursday night 10 mile time trials and it became apparent that I was a strong rider. Weekend rides with a larger group sprinting for village signs demonstrated that I was very good all round rider but particularly a strong sprinter. In 1962, I got into really serious training and one of our seasoned track racing club members encouraged me to start grass track racing. In addition to my success in Club Championships in 25 and 100 mile time trials and road races I also went on to win the 880yd East Midland Grass Track Championship and had 17 track victories and 31 podiums that year for which I was awarded the Dunlop Cup, given to the best novice rider of the year in the United Kingdom. 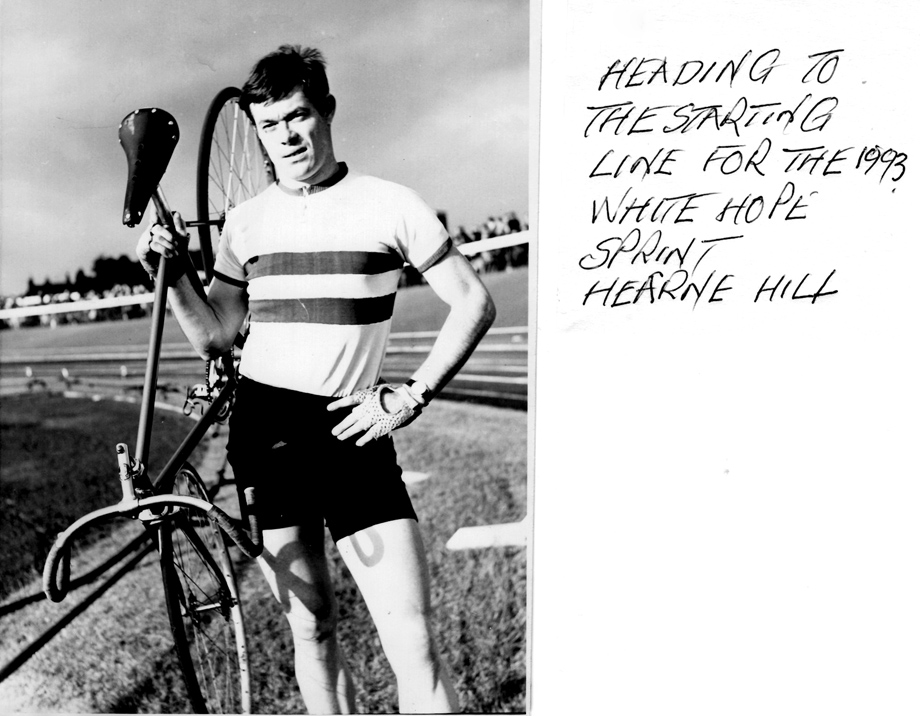 PEZ: That ‘Dunlop Trophy’ in ’62 must have been a nice boost?
This was actually awarded in 1963 for 1962 performances. I was surprised and truly honoured. I was then invited to participate at the famous Herne Hill, London Easter Meeting in the White Hope Sprint. I was now on the big stage, but from my recollection ended up losing to the legendary, Geoff Cooke [Cooke went on to be a multiple British Champion on the track, take Commonwealth Games gold in the tandem sprint and win multiple world masters titles, ed.] 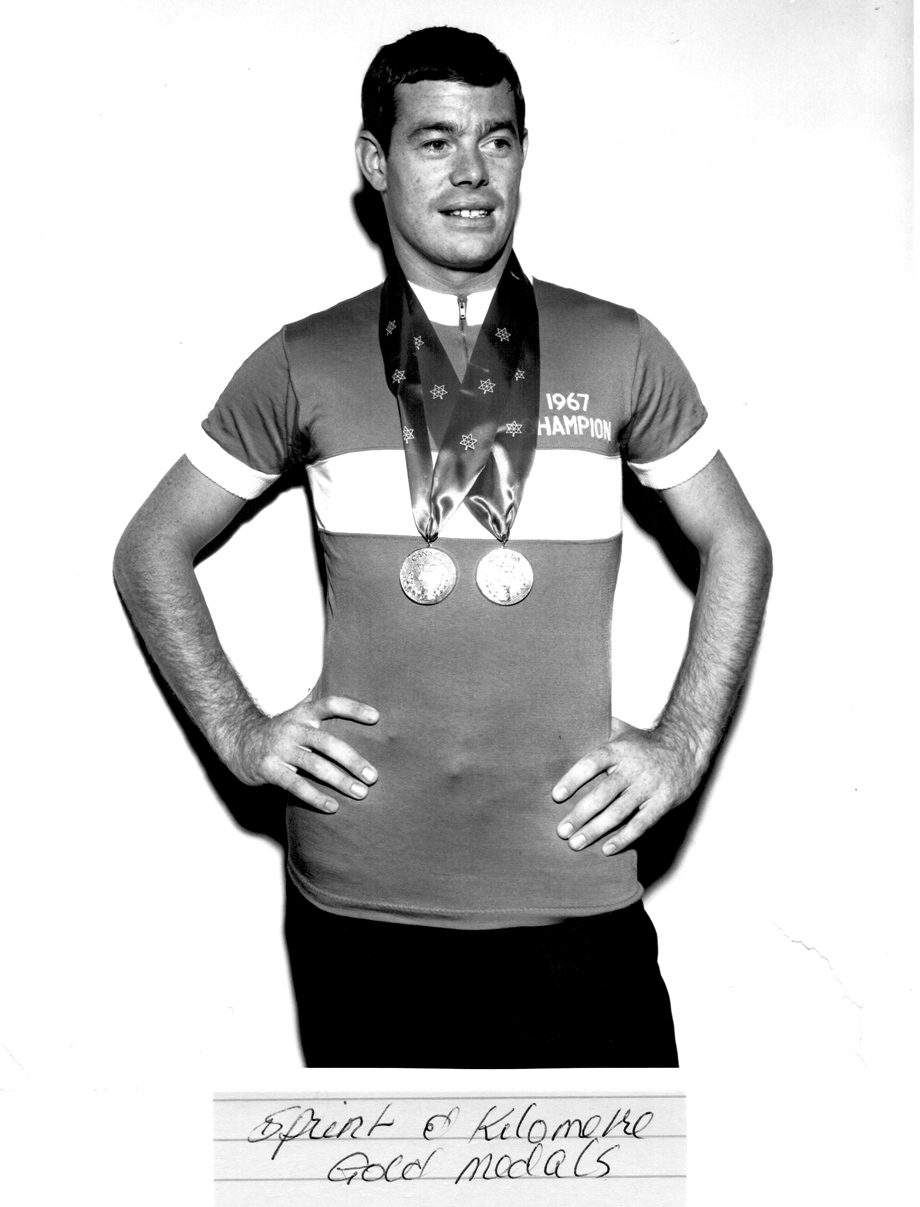 PEZ: Why emigrate, why Canada?
I was married at 20 years of age and already had two young children. Sadly, my marriage was not working out and I decided it was time to move on and begin a new life. I had been working for Rolls Royce aircraft engines as a planning engineer for five years and had an opportunity to join Bombardier in Montreal Canada. Salary Levels in North America enabled me to live comfortably and support my family from afar. My communication skills were recognized and I was transferred to the Northrop Corporation in California as a liaison engineer late in 1966. 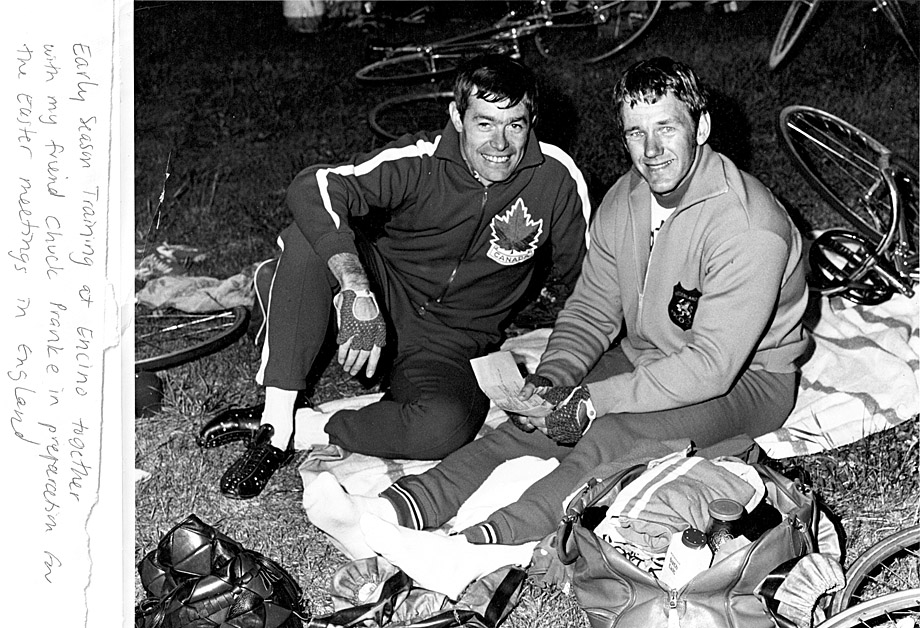 PEZ: California in ’66 – that must have been a good time for you?
It was an amazing opportunity, an apartment on the beach in Redondo, a car and out of town living allowance. I thought I had died and gone to heaven. A wonderful climate and opportunity to train and race with the best track sprinters in the USA; Jack Disney, Tim Mountford Skip Cutting, Jackie Simes, Chuck Pranke and all the other fast guys on the scene at that time. This took me to a new level. 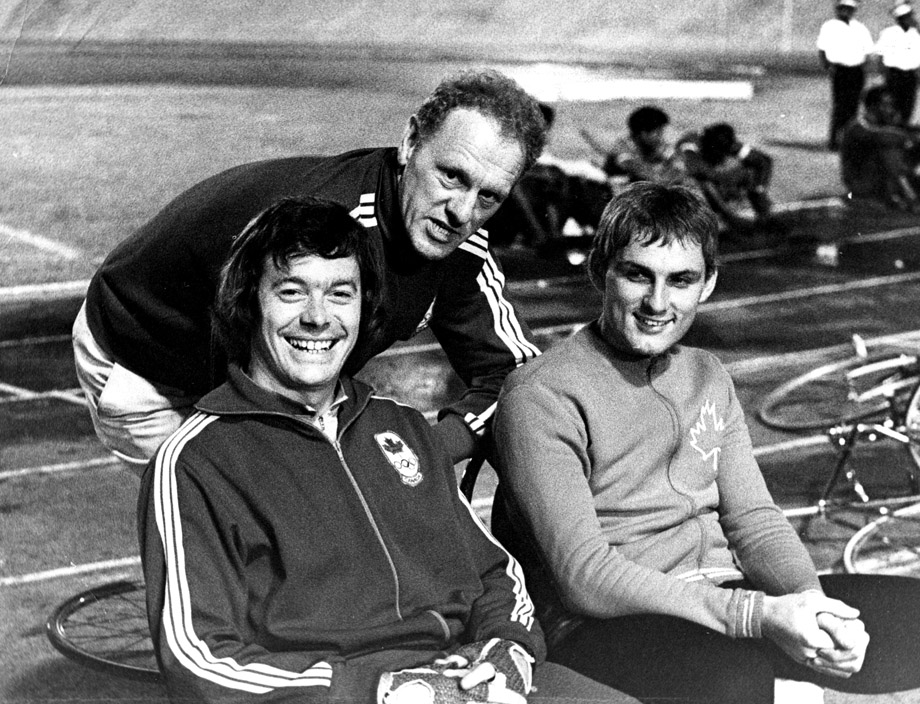 With coach Jefferies and Jocelyn Lovell

PEZ: But no ’68 Olympics for GB despite four Canadian titles and setting good times on the track.
That’s a long story, I had numerous communications with the British Cycling Federation specifically pointing out that my times for the kilometre time trial were faster than anybody in the UK. My times were endorsed by the president of the Southern California cycling Federation.
I was advised it would not be possible for me to be selected for the British team. Politics! That said, Jackie Simes who I was on a par with in this particular event took the kilometre silver medal in the 1968 World Championships in Uruguay, immediately after the Mexico Olympics.

PEZ: You rode the Worlds in ’69 for Canada – what are you memories?
Becoming a money trader, exchanging Korunas for dollars for many of the International riders – a long story. I made lots of money which I had to spend; so after the competition, we were wining and dining in castles with champagne and caviar while being serenaded by string quartets. And the Russians troops and tanks returning, on the anniversary of the previous 1968 Russian invasion, it was a little scary with 7.00pm curfews. Persuading British manager Benny Foster to work with, and fine tune our four man team pursuit squad. Despite the curfew taking my friend the late Audrey McElmury out on the town, to celebrate her incredible victory for the United States in the woman’s road race. 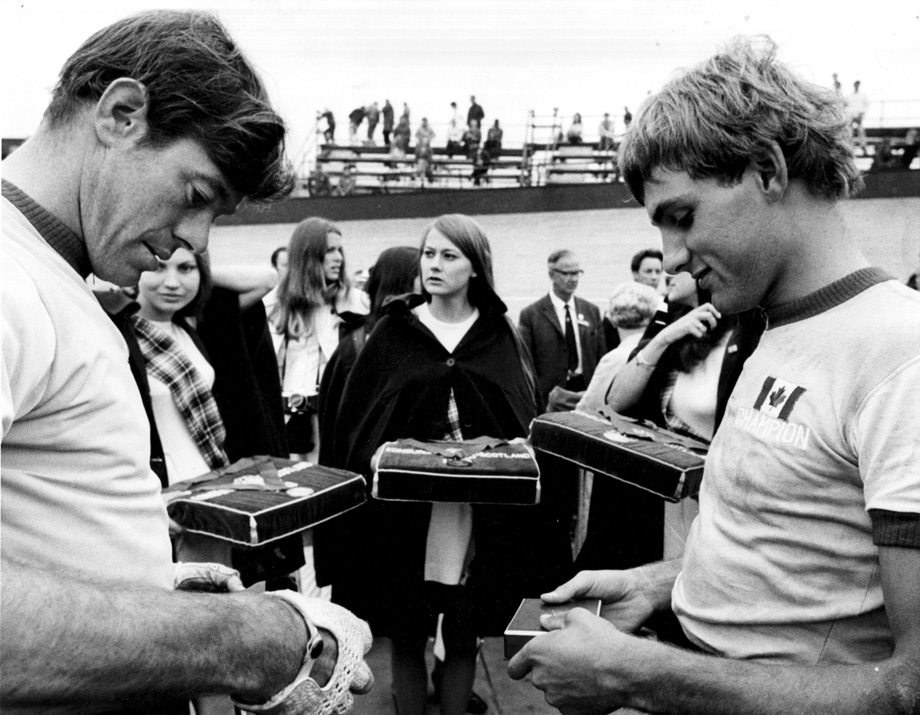 With Lovell and medals

PEZ: Commonwealth tandem silver in 1970 with Jocelyn Lovell – what are your memories of Edinburgh?
This is well described at the beginning of the chapter of the book written by Michael Breckon which I make reference to later. [Like they say; ‘if you want the full story, you’ll have to buy the book folks’ – but suffice to say Harvey and his ‘stoker’ the late, great Jocelyn Lovell came down hard on the Meadowbank Velodrome boards but got back up to win their semi-final only losing out in the final to Aussies Ron Jonker and Gordon Johnson – the latter would go on to win the world professional sprint title at Leicester just weeks after Edinburgh, ed.]

PEZ: Jocelyn Lovell; you must have been something of a mentor to him – a ‘special’ rider.
He was a very ‘special’ rider. He was 10 years younger than me and just coming into his own at this time; he looked up to me and to some degree I was a mentor to him. As the number one and two riders in Canada, we were invited and frequently travelled and raced together to Barbados and Trinidad becoming very good friends. We also teamed together on both the tandem and the 4000m team pursuit, in the Worlds and Pan American Games. Even after his tragic accident when he was hit by a truck and became a quadriplegic I visited him annually on my business trips to Canada, spend time together reminiscing about the good all days. 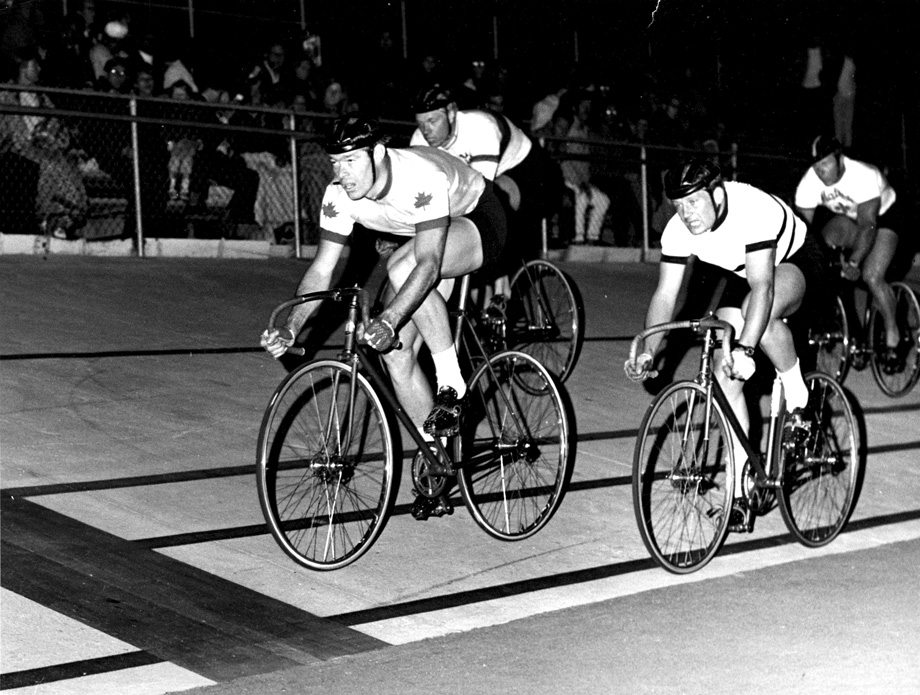 PEZ: The ’70 Worlds at ‘home’ in Leicester – that must have been a thrill?
Yes, it was particularly exciting to race in my home town in front of my parents and two young children, then aged eight and 10 years of age. I received great press coverage; ‘Exile Barry comes back.’ ‘Ex-City Cycling Star in hunt for more medals.’

PEZ: You had a bad crash prior to the ’72 Olympics, that must have been a heart breaker?
Yes, as you can appreciate I felt absolutely shattered, I was hospitalized in Portland Oregon for 10 days, my Olympic dreams and aspirations over. This was the first day of the rest of my life. I decided then to turn my attention to a business career, founded a company call Titan cycle and commenced to build and market titanium frames. 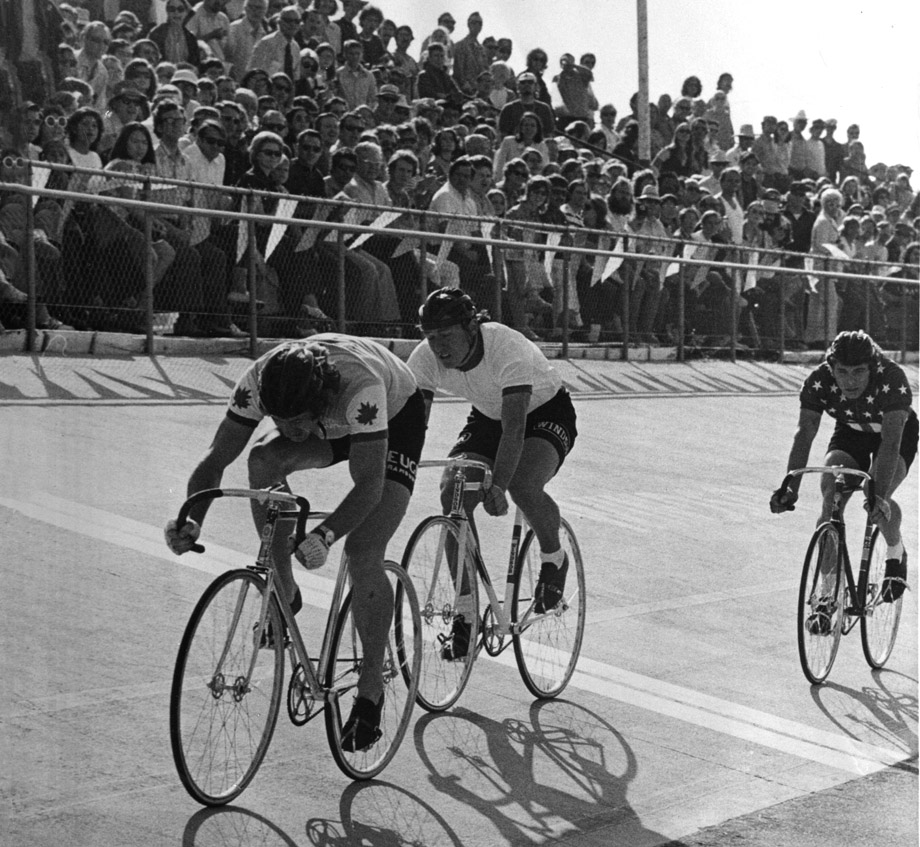 PEZ: How did you get into titanium frames?
I was working for a company called Harvey Aluminium they had a titanium division in which I worked as a sales person. My boss suggested that I build a titanium bicycle to use in the 1972 to Munich Olympics. So that was the beginning.

PEZ: You had Gordie Johnson on one and worked hard at promotion with a full race team.
I was beaten by Gordon in the sprints in the Commonwealth Games and was together with him at the Worlds in Leicester where he turned professional and won the world pro sprint championship. We became friends, and when he came to compete in the 1972 Grand Prix of the United States at Encino Velodrome, I encouraged him to try my titanium bike, he was duly impressed. 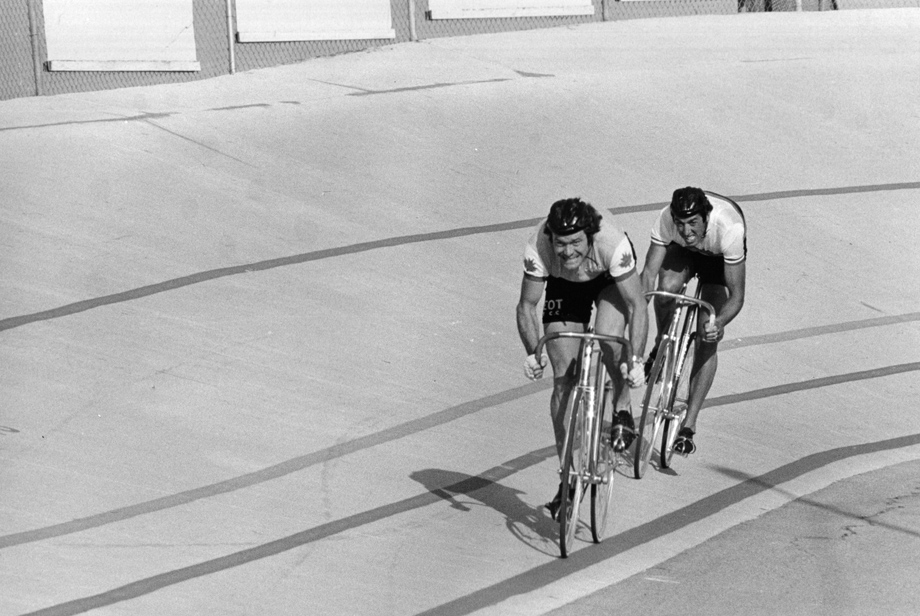 A close finish with Morelon

PEZ: Why do you think titanium frames never had the impact that aluminium and carbon did?
Actually, I believe the titanium frame did have a significant impact on the aluminium frame, many companies are still building titanium frames, but not aluminium. Carbon fibre clearly stole the show mainly due to the fact that the frames are stiffer than titanium. Titanium has a modulus of elasticity that results in a little flexibility in the frame; therefore it’s not suitable for all riders. 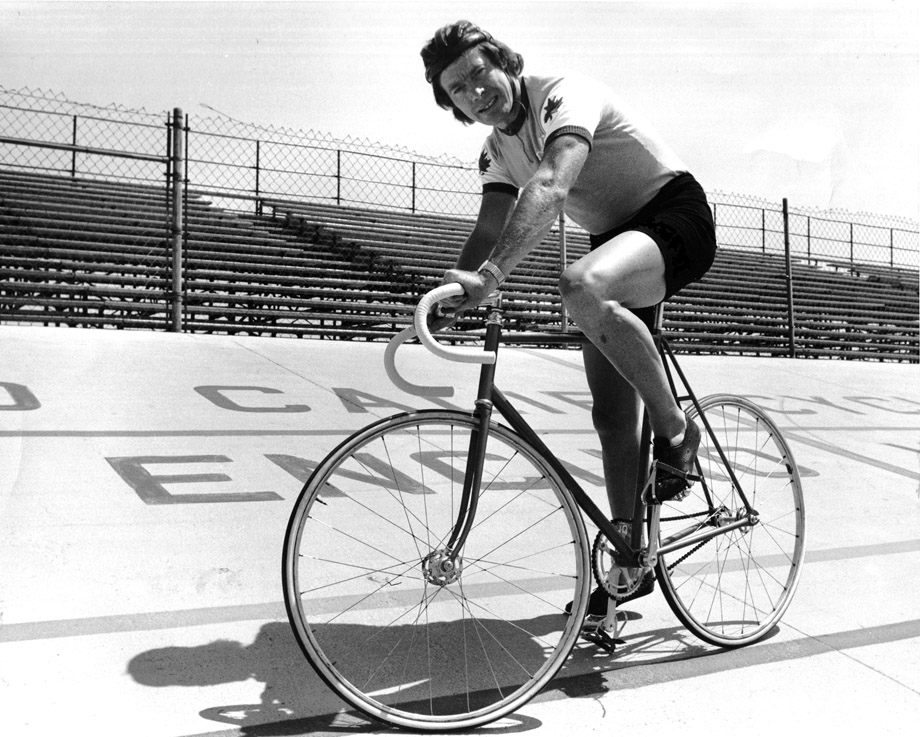 PEZ: But you’ve made titanium your business?
Interestingly at this moment in time, my former Canadian team manager and close friend, Michael Breckon is in the final stages of publishing a book, titled ‘Inside Cycling.’ One of the chapters titled ‘The Right Stuff’ is dedicated to my story. His fascination is with the link between achievement in sport and success in business by applying the same disciplines. Many have tried, but very few have succeeded at least to the extent that I did.

PEZ: Which of your performances gives you most satisfaction?
Clearly, my clean sweep performance in the 1968 Canadian track championships gave me most satisfaction, especially since I was most hopeful of making the British team for the Mexico Olympics. 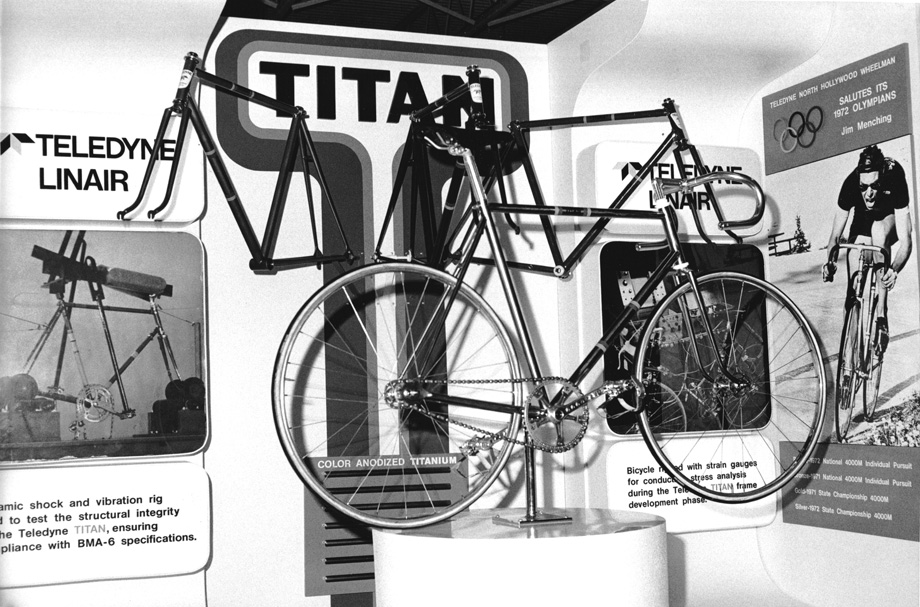 PEZ: Any regrets or ‘with hind sights’?
As, Frank Sinatra said in ‘My Way;’ ‘regrets I’ve had a few, but then again too few to mention.’ But seriously my biggest regret was not competing in the Olympics. In hindsight I should have perhaps return to the UK for the Olympic trials and shown the BCF that I had medal potential in the Kilo? 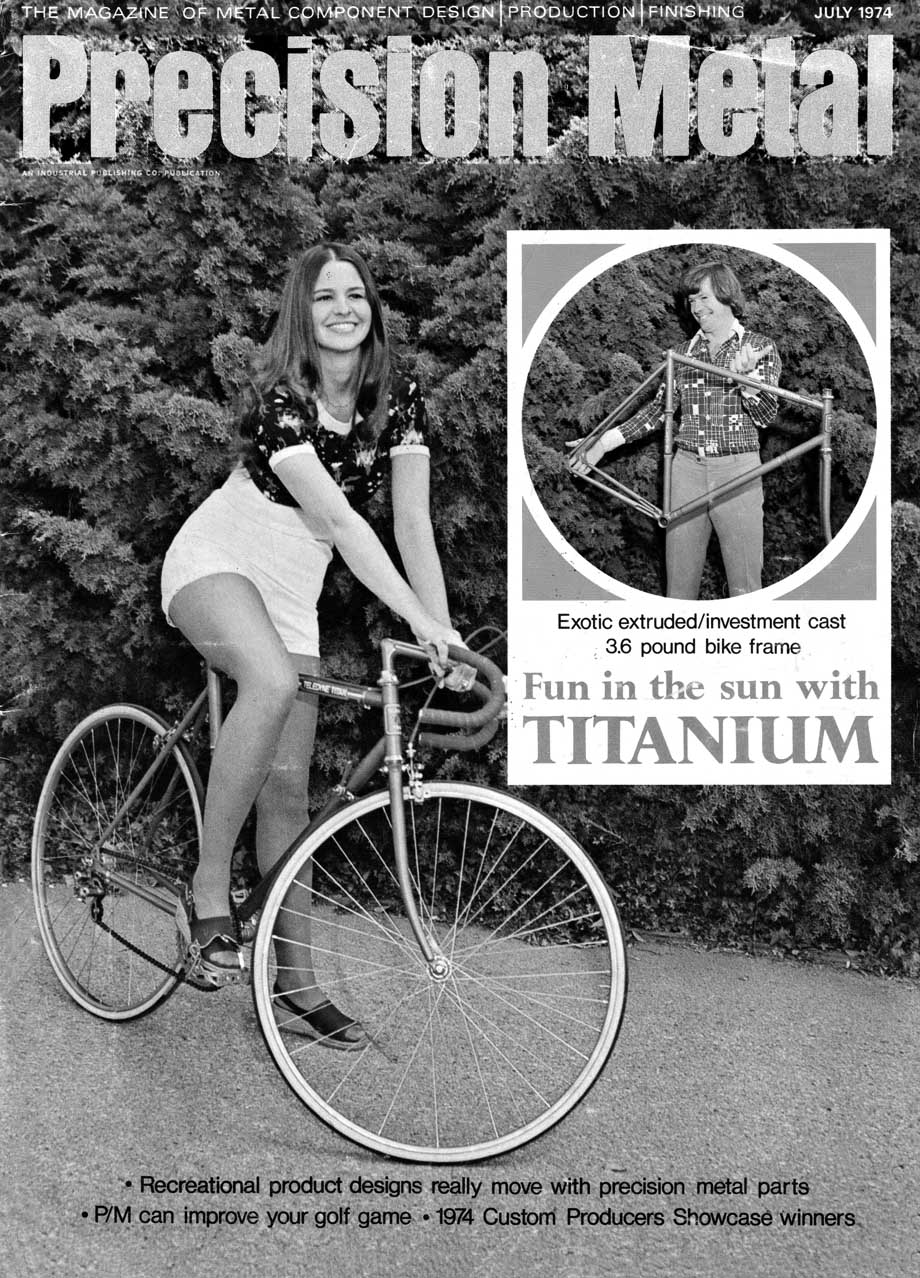 # When ‘Inside Cycling’ is published PEZ will carry a review and you’ll be able to read the full story of Barry and Jocelyn’s Edinburgh tandem epic. #