Over shadowed by the ‘main event’ in Paris-Nice; Spain/Tinkoff v. Wales/Sky, also known as ‘Pistolero’ Contador v. ‘Gee’ Thomas was the battle for the ‘maillot a pois’ – that cool spotty jersey which marks you as King of the Mountains. The man who took it home in his suitcase was smiling 24 year-old Canadian, Antoine Duchesne riding for a team which epitomises the notion that in pro cycling, ‘honouring the race’ isn’t just about how much money your sponsors plough in, it’s about showing the colours, working hard in the breaks, entertaining the fans and grabbing that vital TV time and those column inches for your sponsors – Direct Energie.

The team started back in 2000 as Bonjour-Toupargel and as Bonjour, Brioches La Boulangerie, Bouygues Telecom, BBox Bouygues Telecom and most recently as Team Europcar has been in the peloton ever since under the stewardship of that man with the taste for cowboy boots, Jean Rene Bernaudeau. 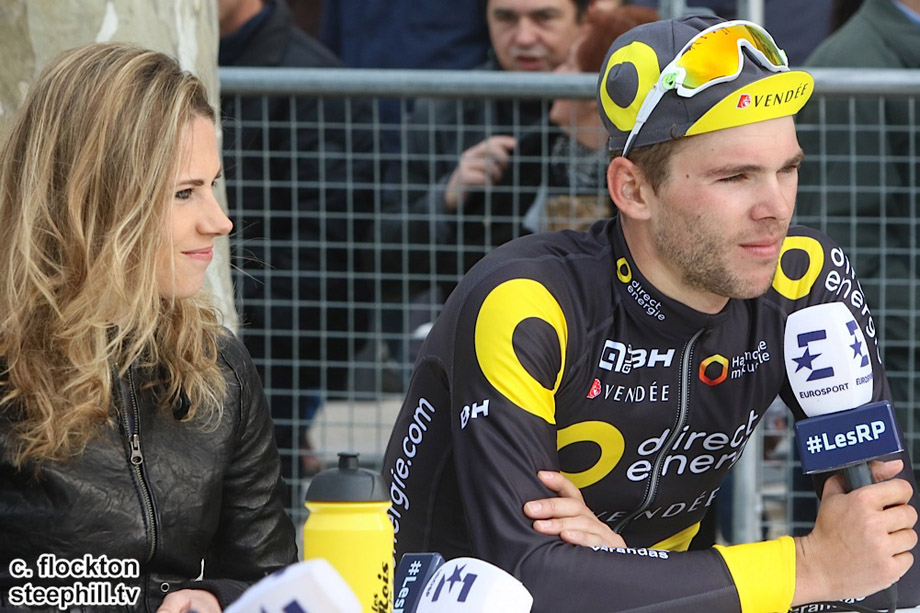 Based in the Vendee in south west France it’s more than a team, it’s part of the local culture. Duchesne hasn’t been around quite as long as the team, winning the Canadian junior madison title with David Boily in 2008. The Canadian Junior Time Trial Championship was his in 2009 and he was fifth in the ‘junior Tour de France’ the Tour de l’Abitibi in Canada. He raced in Europe in 2010 in U23 races like the ZLM Tour and Cote de Picardie, returning in 2011 to ride the Tour de l’Avenir.

In 2012 he rode ‘real deal’ races like the Coppa Agostoni and Stad Zottegem and signed as a stagiaire with Canadian pro team Spidertech – unfortunately the team folded at the end of the season. Axel Merckx signed him for Bontrager for 2013 and there was a bronze medal in the Canadian Elite Road Championship behind Zach Bell as well as top ten placings in Tour of Alberta and Tour de Beauce stages – and a ride in the U23 Tour of Flanders.

Clad in the green of Europcar for 2014 he rode the GP E3, Gent-Wevelgem, the Tour of Flanders, Scheldeprijs and Paris-Roubaix and there was a second place in La Poly Normande a UCi 1.1 in Normandy. Last season saw another podium in the Poly Normande, 10th place in the Four Days of Dunkirk, 20th in the Three days of De Panne and a solid ride in the Vuelta.

Antoine took time to speak to PEZ a day or two after his fine result in Nice. 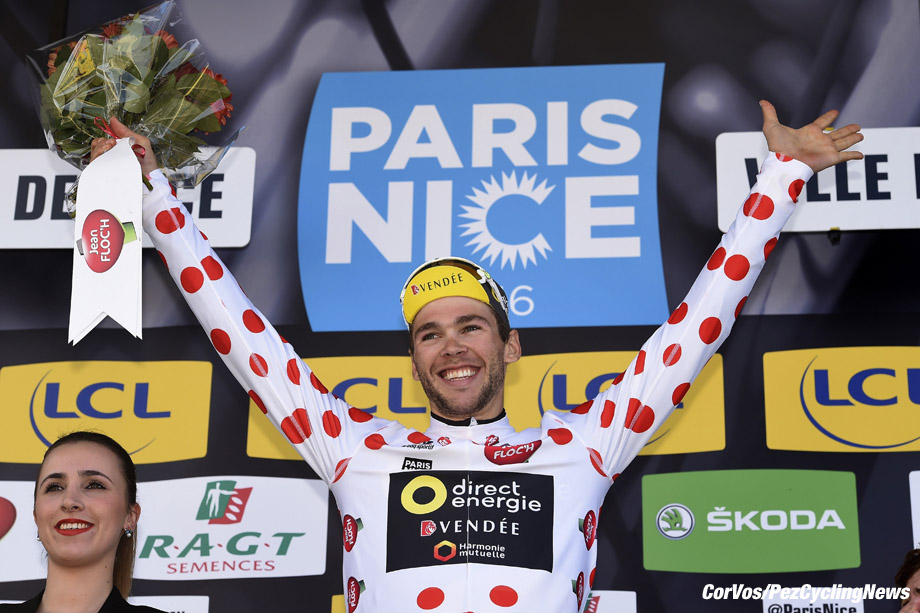 PEZ: Your Twitter ‘handle,’ Antoine – Tony the Tiger?
Antoine Duchesne: ‘Tony’ is the English version of ‘Antoine’ – it was my sister’s boyfriend who started that one – ‘Tony The Tiger’ like on the Frosties breakfast cereal!

PEZ: How did you get into cycling?
When my sister and I were kids we tried all sorts of sports – basketball, baseball, soccer but then my sister got into cycling and joined a club. I went along to see her race then began to race myself, I liked it from the start but I was a late bloomer, to start with the girls used to beat me! But by the time I was 16/17 I was much stronger and became one of the best young riders in Quebec and in my second junior year I won the Canadian junior time trial champs and did a good ride in the Tour de l’Abitibi. I spent time in Europe with Team Wasquehal – Arnaud Demare rode for them at that time and when I came home I rode well on the national stage. I was on the national U23 team and learned a lot the times I spent in Europe – riding those kermises! 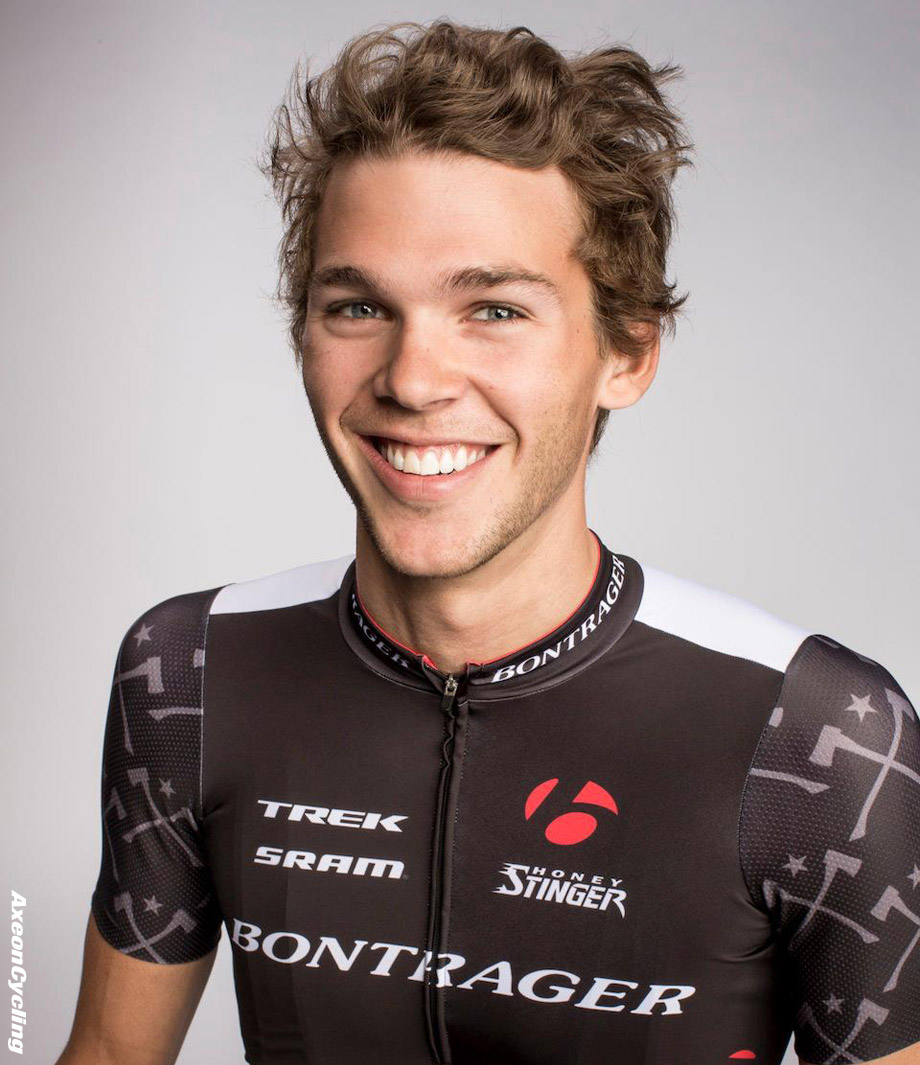 Antoine Duchesne with the Axeon Team in 2013

PEZ: You were stagiaire with Spidertech in 2012 but the team folded. . .
It was a big disappointment; that was a nice team, Canadian guys all with the same good mentality and on the same emotional wavelength. I rode stagiaire from August but it folded in October. I tried round all the North American teams but couldn’t get a ride – then Axel Merckx from Bontarger called me on November 25th and said he had a place because a guy had pulled out. Ten days later I was training with the team – it was a good year I rode Gila, the Tour de Beauce, California, Colorado and Alberta. Then Europcar spotted me in the Quebec and Montreal races and offered me a spot.

PEZ: I believe the team is part of the fabric of Vendee life?
Very much so and I was made right at home by everyone; Jean Rene Bernaudeau was very welcoming but it helped that I’m not the first Canadian on the team – David Veilleux was with the team so they had an understanding of the Canadian mentality. The team is more like a family, when we go to races together it’s a great atmosphere.

PEZ: Europcar is now Direct Energie for 2016, what have been the biggest changes?
The coming of Sylvain Chavanel has brought a lot of energy to the team – he’s just so motivated. And Direct Energie as sponsors are so much more involved; I don’t think I saw anyone from Europcar at a race during the past two seasons – the Direct Energie guys are so much more involved. The company owner comes to the races and is in the team car – they’re more than just the sponsor, they’re really involved. The new sponsor has put new energy into the team; it’s a young company with an average around 30 and their mentality matches that of the team so it’s a great combination. 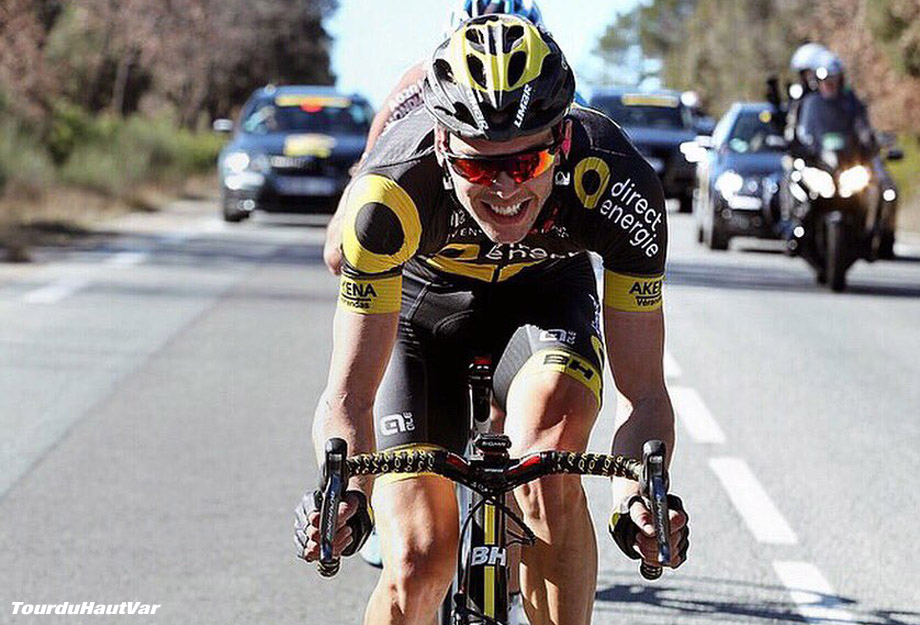 On the attack in the Tour du Haut Var

PEZ: You were second in the King of the Mountains in Haut Var, did that motivate you to for the jersey in Paris-Nice?
Not at all! On Stage two I was in the break and picked up the points but it wasn’t like I fought for them.

PEZ: You were very active in the final stages of Paris-Nice.
I was in the break on Saturday and ended up as the guy with most mountain points then on Sunday I figured I would be as well in the break as in the peloton on that type of terrain – difficult, rolling and you have to fight whether you’re in the bunch or in the break. The breaks I got in were good with big, strong guys and it worked out well for me. 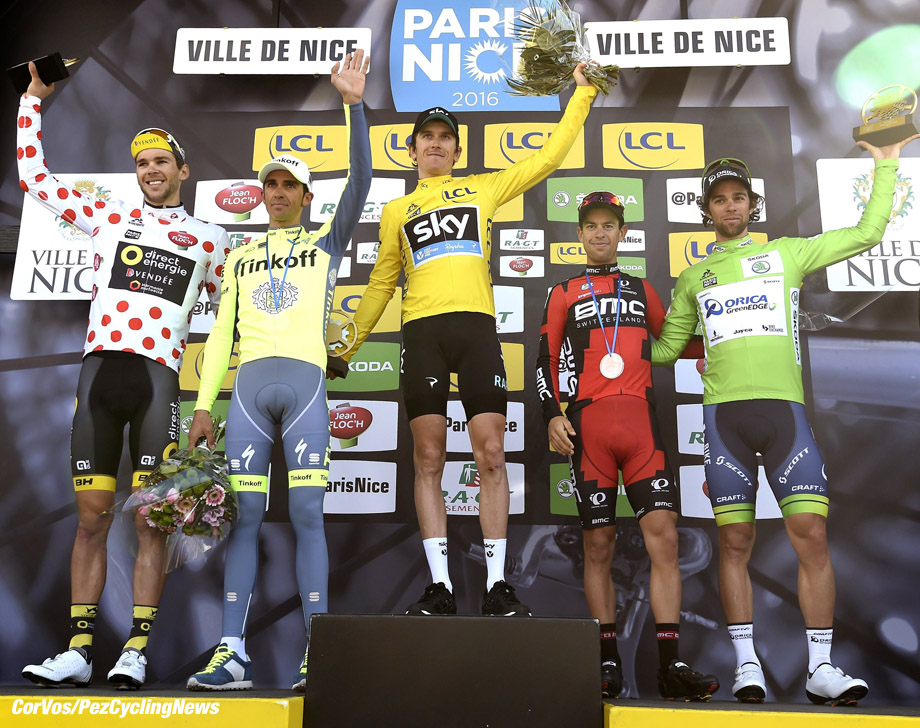 Quite a podium in Nice: Duchesne, Contador, Thomas, Porte and Matthews

PEZ: So the Paris-Nice parcours were to your liking?
Yeah, I’m quite a big guy at 1:90 so the long, steep climbs in the high mountains aren’t for me – but in Paris-Nice it was never like steep, steep more rolling and that suited me. I was conscious of watching my weight coming in to the race and was two kilos lighter than usual – that helped a lot. 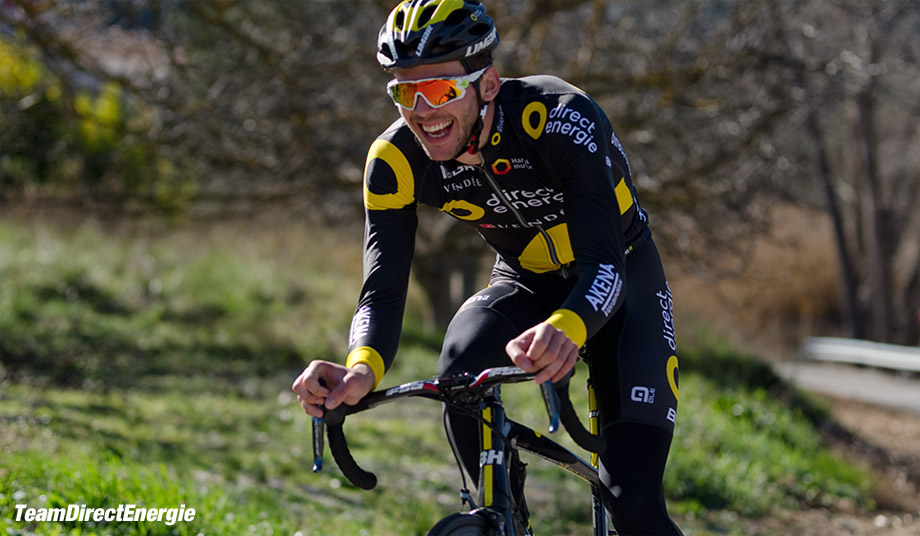 PEZ: Time for the pavé now?
I love the pavé; the Classics are my main objective. I’ve been riding the big, cobbled northern races since my U23 days and have good experience of the parcours now – I’m really looking forward to it, especially with Chava on the team. I don’t ride Gent-Wevelgem but do Dwars Door, E3, De Panne, Scheldeprijs, Flanders, Roubaix and Amstel – after that I take a break go back to Quebec then ride the Tour of California.

PEZ: You’ve twice been on the podium in La Poly Normande.
It’s a race which suits me, a lot of guys go into that race off a break but I’ve gone in off the Tour de Wallonie with good fitness and the parcours suit me. Both years I’ve gone with the early break and stayed away.

PEZ: You rode the Vuelta, last year.
That was really something! The first week I was little sick and the weather was very hot – but the second and third weeks I recovered and surprised myself. It proved to me that I have good recovery; I was there fighting to get in the breaks and helping our GC guys those last two weeks – what was good too was that I wasn’t dead at the finish. I rode the Worlds in Richmond on the strength I gained from the Vuelta; I was in the front group ‘til the end and finished 61st in what were my first Elite Worlds – I was happy with that result. 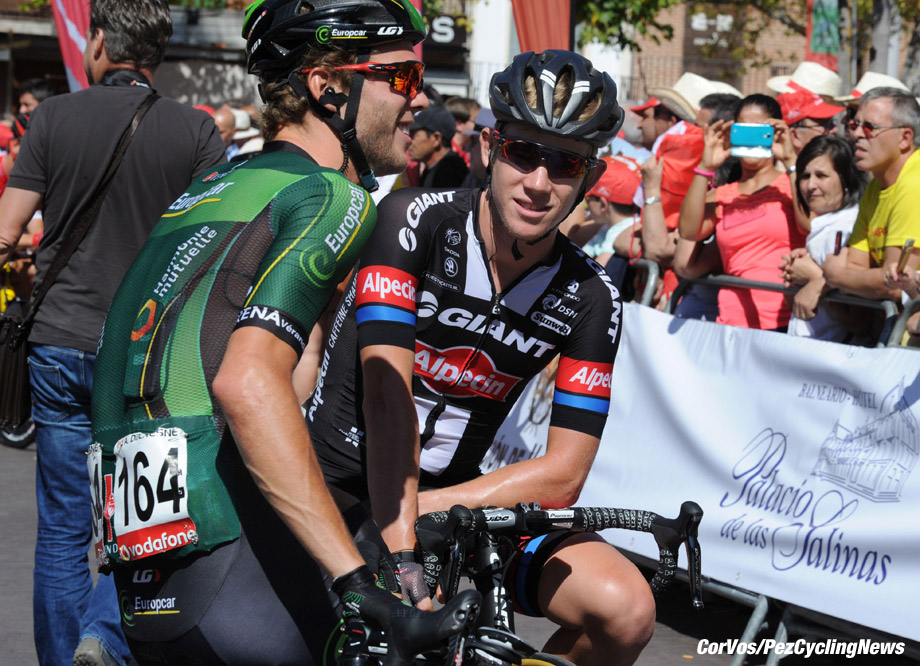 At the 2015 Vuelta a España talking with Lawson Craddock

PEZ: Are The Olympics on the ‘to do’ list?
That’s another of my objectives for the year but it’ll be tough; Canada has three spots with one of the three riders to ride the time trial. Ryder Hesjedal and Mike Woods will be two choices I guess so I’d be looking at the third spot – but there are guys like Hugo Houle and Svein Tuft fighting for spots, in fact maybe five or six of us. . . I’d love to go but I’m young at 24 so I can be thinking about 2020 and 2024 for the future.

PEZ: And you’re training to be a sommelier when you’re not training and racing?
I’m really interested in wine; my best friend when I was 18 began to study wine and that got me into it – reading, drinking and discovering. When I lived in Quebec my apartment was above a gastro bistro, I shared a flat with the chef and the sommelier. If I have free time I spend it at a local vineyard and work there when I have holidays. I want to learn and the vineyard is where I go between races if I have the time.

# A man of many talents, we’ll be watching for his name when the Cobbled Chaos kicks off, Antoine will be riding in this Sunday’s Tour of Flanders. 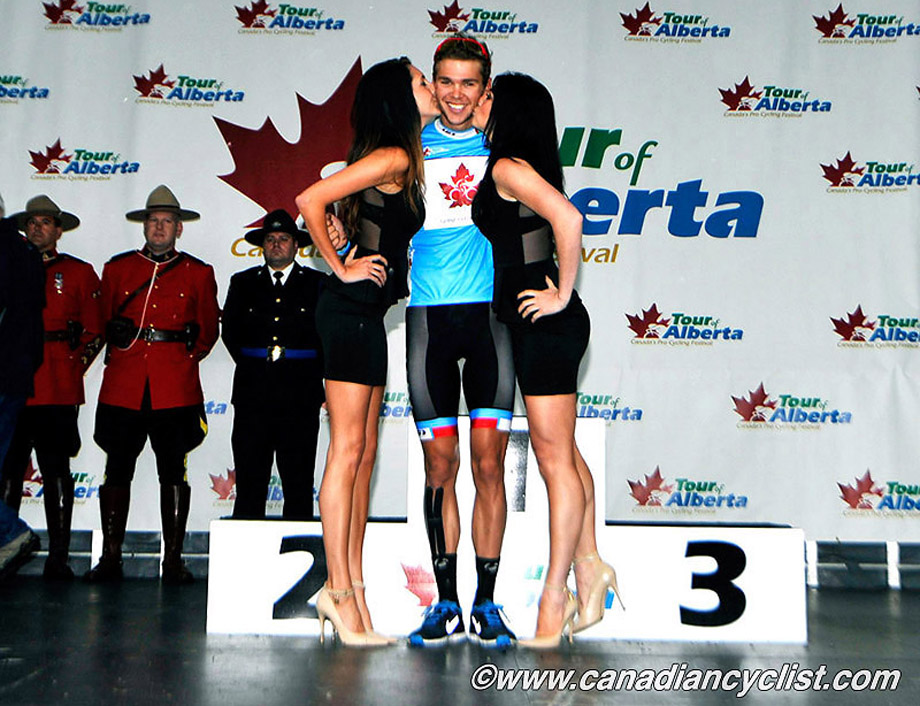