Franco Marvulli’s six day stats become ever more impressive: 29 six day wins off 88 starts, a stretch of 45 six days with only two non finishes (one illness, one crash) and of the other 42, his lowest placings were three 4th places – all the rest were podiums. Ed Hood took a few loud moments in Trinidad to talk to the Swiss star.

It was so loud and hot down at Palo Seco velodrome in the south of Trinidad that Franco Marvulli and I had to go and sit on the grass bank behind the stand to get some peace – and respite from the sun.

PEZ: What’s the worst place you’ve ever given an interview, Franco?
Probably here!

PEZ: How did the Trinidad & Tobago trips come about?
My friend, Sebastian Donadio spoke to me about it for the first time at the Hasselt six in Belgium. It’s a good time, after the Worlds, Seb has been a few times, I spoke to Michael Phillips the organiser about it and Peter Jacques did a good job of organising everything. 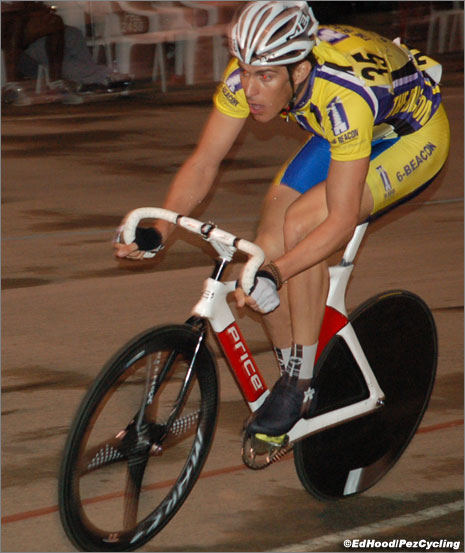 PEZ: Mobel Marki, your sponsor has pulled out – the end of an era, they’ve been in the sixes so long.
Yes, and it’s not just because Bruno Risi retired, the recession is hurting everyone, there just isn’t the money available.

PEZ: But Assos stick with it?
Yes, they continue, I’ve been with them for a long time and have even done wind tunnel testing with them – for special skinsuits for the Olympics. 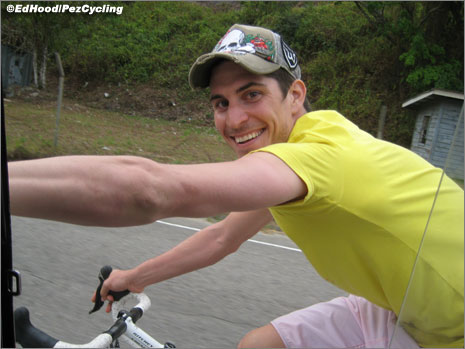 PEZ: Why so few road riders on the track?
It’s difficult to do both as they get more and more specialist. The road teams want their riders to prepare in a certain way and most of the time the sixes don’t fit in with that. And sometimes road riders come to the sixes and aren’t prepared for how hard they are – they have to work very hard for their money. Another thing is that the road season gets longer all the time; in fact, it never really stops – with races in Australia, South America, South Africa and the road riders need a break. 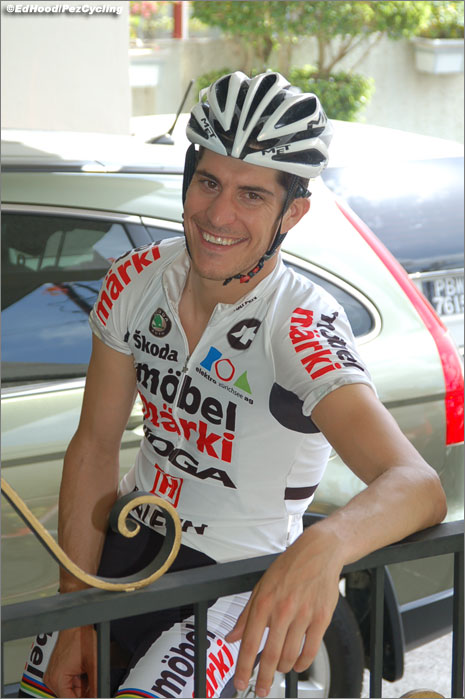 PEZ: Rasmussen and Morkov are said to be going to the road.
They get a lot of attention in the sixes but if they want to do well on the road then you can understand that – it’s very hard to do both.

If you come out of a winter where you’ve ridden seven sixes, one after another, the last thing you want to do is ride road races – and it’s hard going from the small gears of the sixes to the big gears on the road. 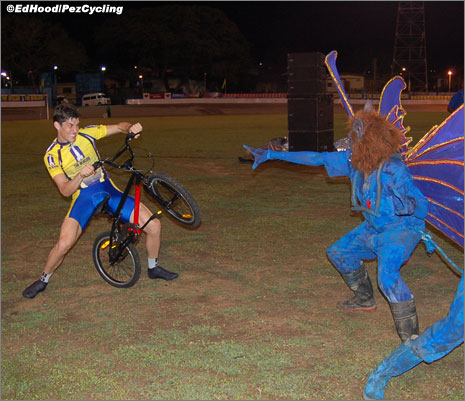 PEZ: This month, Pro Cycling magazine has an interview with Bruno Risi, he wasn’t too complimentary about you.
I’ve suffered from what Bruno has said about me in the media. But it doesn’t matter now, it’s in the past and no longer bothers me. I think that some of the negatives he puts my way are to take away his own negatives. He was never a rider that would admit he was bad; it was always the other riders who were ‘very good’ that day, he could never say; ‘I rode badly, today.’ You know the last time I spoke to him? On the podium of the Copenhagen six, since then, not a word, but that’s what I expected. At this year’s Worlds there was no text to wish me good luck and he asked someone else how we did – why not give me a text message or a call? 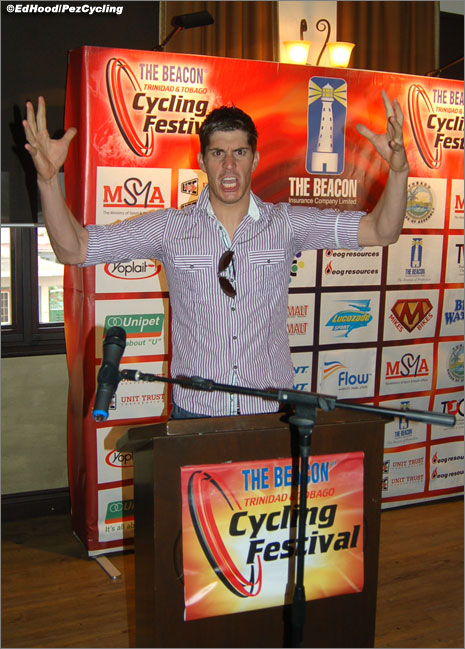 PEZ: Your new partner?
I’m not in a hurry, I have all the time in the world and there are plenty of riders who want to ride with me.

PEZ: Tristan Marguet?
I’ve already won a six with Tristan, at Tilburg. But by the time he is ready to ride with me all the time, maybe I’ll be retired?

PEZ: The Worlds, a disappointment?
Yes, I was disappointed, I had good form, not good enough to win, but good enough to do better than we did. But I can’t be disappointed with my season, I rode ten sixes and win five of them. You always have to look to the future, not what happened in the past. 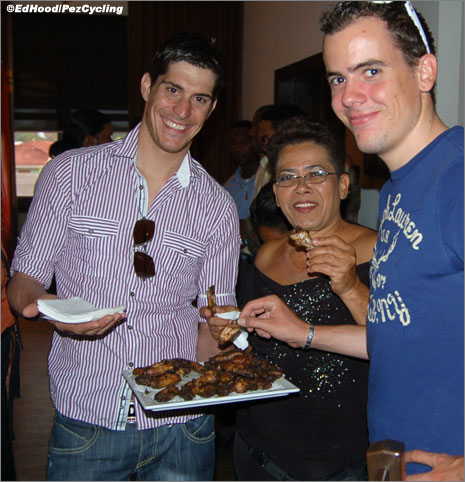 PEZ: Why are things so bad for the sixes in Germany?
There’s a financial crisis, sponsors aren’t spending and people don’t have disposable income. Zabel quitting? I don’t think that’s a reason but it doesn’t help that Germany doesn’t have many young guys coming up.

PEZ: And Gent marches on.
The people in Belgium are cycling crazy, but they also have the young riders – Keisse, De Ketele, Mertens, Schets, Deporteere. 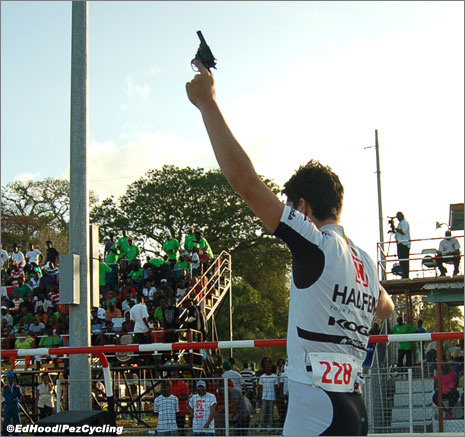 PEZ: Who else is on the way up?
Ask me a better question! Apart from the Belgians; Marguet, Barth, Kreutzfeldt . .

PEZ: Why have you always supported Grenoble rather than Dortmund?
I’ve nothing against Dortmund, it was a good race, but I like a week in France and have become connected to Grenoble. I won my first six day there and now I’ve won five – the promoter always makes me a good offer and I enjoy the race.

PEZ: Is the Grenoble format, with the dinners and entertainment the way forward?
Of course, look at this meeting here in Trinidad, there’s athletics, bands, food, music – it’s a day out for the whole family.

PEZ: Did you ever want to be a ‘big roadman?’
There was a time when I thought maybe I should go on the road but I couldn’t see me training for months to prepare to ride one race. I need victories to motivate me; I love to race small criteriums with a couple of thousand people there, get involved with them, have fun. That’s why I like the track, you’re connected with the people, not remote from them. 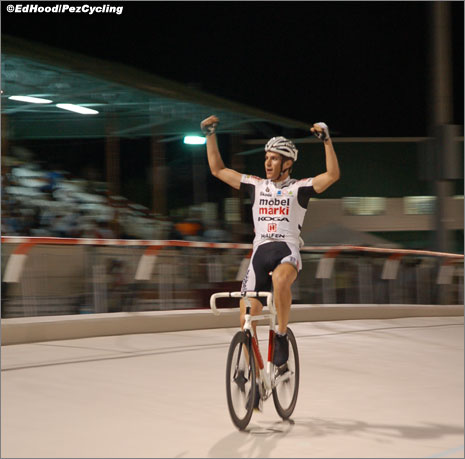 PEZ: London 2012?
It could be my last big goal; there’s no madison but I’d like to ride the omnium. Being realistic, I’d have to have two very good days – the elimination would be a ‘banker’ for me but I’d need to start looking at pursuit times and kilometre times. I’d want to ride well if I went and it might be a good way to end my career.

PEZ: Speaking of that . .
I don’t know, I’ll take stock after the Olympics, I live each day at a time. For sure I’ve looked at what I’ll do after cycling but I don’t know when the day will come that I’ve had enough – maybe one year, maybe ten.

***
He then proceeded to annihilate the field in the 30 lap scratch; I think he’ll be around for a while, yet.