Edinburgh, the summer of 1986 on the eve of the Commonwealth Games. Many nations have decided not to participate due to the UK having too close links with the South Africa and it’s apartheid regime. One of the nations boycotting the race is Trinidad & Tobago, but their spectacular kilometre specialist Gene Samuel is already in the ‘Athens of the North’ and is ‘all dressed up with nowhere to go.’

The company I worked for back then, CR Smith, sponsored a cycling team – GS Modena; when we heard about Gene’s predicament we signed him up for the support races at Meadowbank Velodrome. He won every one of them, except for one, which he gifted to new team mate, Callum McGregor. It’s been 24 years since I last met the man they call ‘Geronimo’ but he hasn’t changed much – although the pony tail has gone.

PEZ: You rode four different Olympics, Gene?
Yeah, but I never rode a great Olympic kilometre; I rode LA in ’84 where I was 4th; Seoul in ’88 and was sick; Barcelona in ’92 where I was 8th and Atlanta in ’96 three weeks after I broke my shoulder, I think I was 10th.

PEZ: Commonwealth Games?
In ’86 it was the boycott, in ’90 the Games were early in the year and the Trinidad Federation couldn’t help me with funding to go and train with Shaun Wallace in LA to prepare properly. They said; ‘why not just go to the Games for the trip, you’ve never been to New Zealand?’

But that wasn’t my way – I actually ended up being disciplined by the Trinidad Olympic Committee for not going.

In 1994, in Canada it was just so cold that I couldn’t function. If you’re from the Caribbean, the cold affects you badly; I was in good shape, I’d been racing crits in the US but I just couldn’t perform. 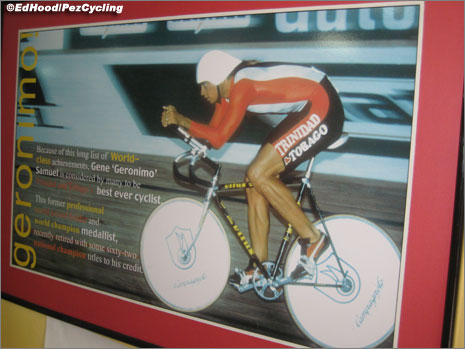 PEZ: The Pan Am Games were your hunting ground?
Yeah, I won silver in Indianapolis ’87 behind Kurt Harnett (Canada), gold in Havana ’91 in front of Erin Hartwell (USA) and bronze in Mar de Plata ’95.

PEZ: What was your best for the kilometre?
I did 1:04:004 at altitude in Colombia in ’92, that was the world pro record, then the following year they did away with the amateur/pro distinction. I really liked the Colombian people – despite the fact that the record I broke was held by a Colombian guy – they were very supportive and sporting.

PEZ: Wasn’t the pressure of all those big rides hard to handle?
I’ve always been a positive thinker and figured that if things go bad then they’ll get better. I would always come back and work on my weaknesses, try more road miles or more weights.

In 1990 I hooked up with Shaun Wallace and he put confidence into me. He was so fast, I could barely hold his wheel in a 15 minute time trial – my heart was at 192 all the way. We helped each other and in ’91 at the Worlds, he got silver in the pro pursuit and I got bronze in the kilometre.

One of the things I introduced him to was to rest during the day and he encouraged me to be the first kilometre rider to use tri-bars.

PEZ: How many Trinidad national titles have you won?
Before I retired, it was 62 but I’ve won three as a senior, so that’s 65. I’ve won sprint, kilometre, points, ten mile, pursuit – but I never managed to win the road title.

PEZ: As I recall, you were the fastest rider in the world over one lap, you would have excelled in the team sprint.
Oh yeah, I always had a great start, we focussed on making my third and fourth laps faster but perhaps I lost a little in the start as a result but we worked on it and I got my starting speed back. I remember Marty Nothstein being very excited at how I was going in ’96, he said; ‘there’s an Olympic medal for you, this year!’ Then I broke my shoulder, three weeks before the Games. I lost maybe two seconds on my first lap because I couldn’t pull on the bars. 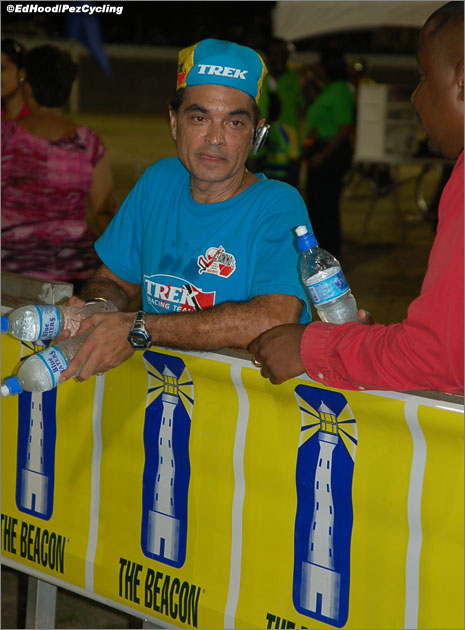 PEZ: We’re now near to 59 seconds from a standing start – how so quick?
One of the reasons is technology, the carbon bikes are so much stiffer. At the LA Olympics in 1984, for the first time, I saw slow motion video of myself starting and was scared when I saw how much my wheels and frame flexed from the starting effort. But folks said to me; ‘that’s just how it is!’ – that held me back for a few weeks, I’m sure.

The power these guys put out nowadays, especially on the first lap, it amazes me, they need stiff bikes to handle that power. And those big gears they ride – I don’t know how they do it.

PEZ: Your best ride?
There were two; in the ’91 Pan Am Games in Cuba I did the perfect ride; I had a couple of guys beside the track giving me information but at half distance I was telling myself, ‘I’m not dying, I’m accelerating!’ I was level with Erin Hartwell at that point and usually he’d finish strong and I’d die, but I put a second into him in the last two laps to win it.

The same year, when I won the bronze in the Worlds, that should have been faster but I had so much hassle with officialdom. If it hadn’t have been for Mike Fraysee, I wouldn’t have got to ride because there was confusion about my registration. They put me off number one and I was so stressed there’s one lap of the ride I just don’t remember at all. When I got my head together, I said to myself; ‘don’t panic’ and tried to concentrate on my last lap. With the last man and favourite, Kirichenko in to his last lap I picked up my bag and began to walk away; ‘shit! fourth again!’ I thought.

But Shaun Wallace came chasing after me shouting, ‘he’s blown, he’s blown!’ Kirichenko cracked and went from first to fifth or sixth and I was bronze medal.

Everyone was very happy for me – they made more fuss of me than they did of Rouseau, the Frenchman who won. 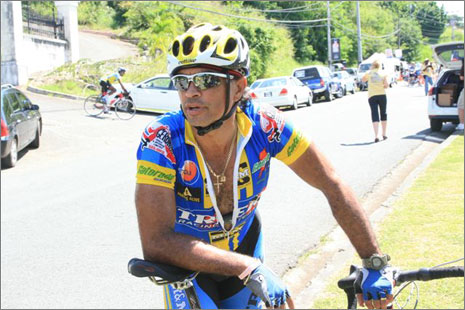 PEZ: Did you ever think about a road career?
Steve Bauer said he could get me a road contract for 1985, but I was too focussed on the Olympics. I did a lot of road training – maybe 90% of my preparation was on the road. I would do 100 mile rides as part of my build up.

PEZ: I believe that the Canadians offered you citizenship?
My coach, Desmond Dickie was Canadian and because I spent so much time at his house, they said; ‘why not come and ride for us?’ But when it came down to it, I wanted to put Trinidad on the map and couldn’t go through with the change. Hesslich and Hubner (big German sprint names) didn’t know where Trinidad was, they thought I must be some kind of crazy millionaire to come all the way from the Caribbean. The truth was that the Government didn’t help at all. When I won the Worlds medal, the Trinidad Federation gave me a cheque for $7,000 – I handed it to my manager to help with all the money he’d laid out to get me there. 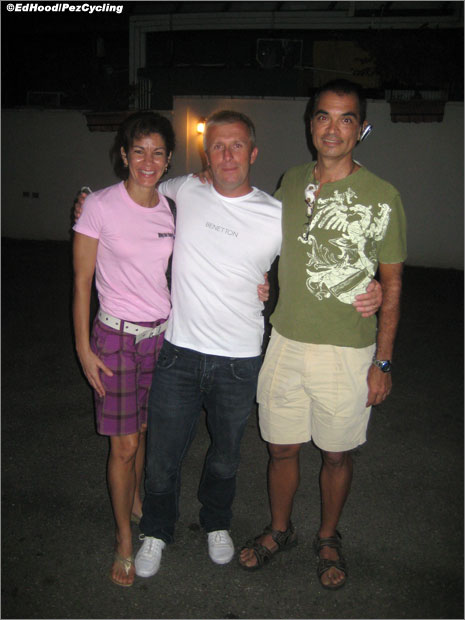 PEZ: And still racing at 47?
I’m 50, this year, man! Having my own team with the shop has given me good stimulus and with my son racing now, that’s given me extra motivation, too. Racing again has brought me on and it’s been great, racing with my son.

PEZ: Regrets?
I wish I’d been in a better coaching environment, earlier. It was late when I started to work with Shaun Wallace and I’m sure if I’d started that kind of work earlier then I would have won World and Olympic medals. Hopefully, I can give the guys in my team that step ahead at the start of their careers.

***
It was good to see the man, again and good to spend in his company ‘talking kilometre time trials’